Switch plasmid is transformed either with its respective trigger or empty plasmid into E. coli BL21 (DE3) cells. Single colony of each set-up was picked to grow overnight culture. Expression of reporter mRFP was done by shaking culture for 6 hours after 1% inoculation when log phase was reached. After harvesting the cells and determining the OD600, cells were washed with PBS buffer, concentrated 10x and then aliquoted in 96-well plates to determine the fluorescent signal by exciting at 584nm and measuring at 607nm. Final fluorescent signal were normalized by OD600 to give the final relative fluorescent unit (R.F.U). Below listed the result of our 15 influenza switches and SAT switches: Since N9-2 switch showed the highest ON/OFF ratio (33 fold), we further investigate its performance in cell free system. We tried to express: (1) luciferase positive control provided by the manufacturer, (2) negative control where DNA is replaced with water in separate cell free reactions, (3) J61002(constitutive mRFP generator as a positive control of the highest possible RFP expression),(4) N9-2 toehold switch, and (5) N9-2 toehold switch and trigger pair, in cell free system. However, we cannot obtain any significant fluorescent signal from any of the cell free reaction (data not shown). To check if any protein is expressed (M.W. of mRFP= 25.4kDa; M.W. of luciferase= 62.9 kDa), we ran an SDS-PAGE gel: 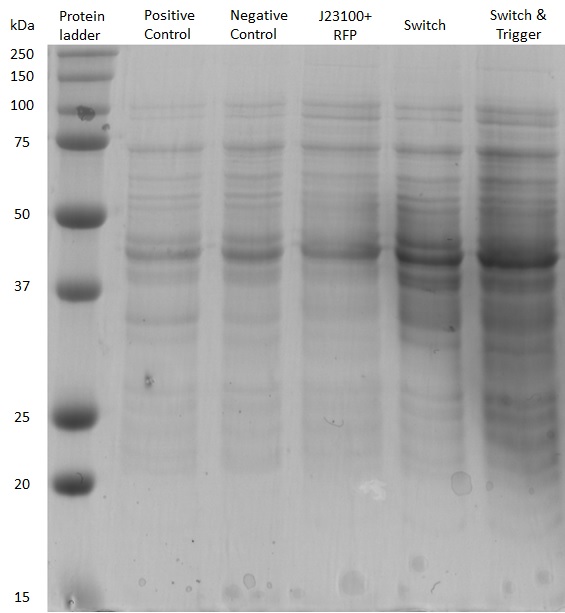 We could not observe any over-expression of desired protein in the gel. Possible reason behind is that the protein is not expressed due to nuclease contamination(cell free system is extremely sensitive to nuclease) or is expressed in unobservable quantity. We tested our toehold switch cloning tool when constructing the SAT switch and trigger that we designed for Chang Gung University. We ordered a pair of 60nt oligoes when constructing each switch-expressing plasmid and trigger-expressing plasmid. The complementary oligoes were mixed to give dsDNA insert with sticky end. The dsDNA was then ligated to Eco31I digested plasmid. Ligation product was transformed to E. coli DH5a competent cells. Below showed the plate of E. coli cell transformed with SAT switch-oligoes-ligation product and SAT trigger-oligoes-ligation product viewed under blue light: We found that amajLime(BBa_K1033916) was described as “chromoprotein” in the main page. We later found that amajLime is a fluorescent protein instead. Therefore we scanned its emission and excitation spectra and documented it in the Registry. The excitation peak and emission peak were found to be 445 and 485 nm respectively.

We then measured the fluorescent signal of mRFP(BBa_E1010) and amajLime(BBa_K1033916) in buffers with different pH:

Purified mRFP and amajLime were diluted to 0.1 µg/µl (200 µl in total), in triplicates, into different buffers which pH ranges from 2 to 12. Volume of mRFP:buffer = 1:1.8, amajLime:buffer = 1:4.3. The lines represent the trend of the median fluorescence for the measured pH values. mRFP and amajLime were excited by 584 nm and 470 nm respectively and emission was measured at 607 nm and 515 nm respectively. To facilitate reproducibility of the experiment, we correlated the relative fluorescent intensity to an absolute fluorophore concentration by referring it to a standard curve of the corresponding fluorophores using the interlab study protocol. We used Rhodamine to standardize mRFP fluorescence, and Fluorescein to standardize amajLime. The results show that the optimum pH of both chromoproteins ranges from pH 6 to 8. Their fluorescent signals thus will probably not be interfered by the pH of our proposed sample: saliva, throat swab or NP swab.