Experiments to test our project were segmented into three different sections:

The goal of this assay is to determine and measure the PET-degrading abilities of our parts. The first experiment is carried out using pNPB Assay. PETase activity was tested using pNPB (p-nitrophenyl butyrate) Assay which measures esterase activity. Trasformants of BBa_K2378005 were grown for 4, 16, 24 hours in LB and tested against pNPB to determine their esterase activities, which were measured spectrophotometrically. As controls, we grew BL21 cells without plasmid with the same variations of age.

The results clearly showed that PETase activities were observed in all different variations of bacterial age, as the absorbance differences with their individual controls were significant. We can thus conclude that our designed PETase works as intended. 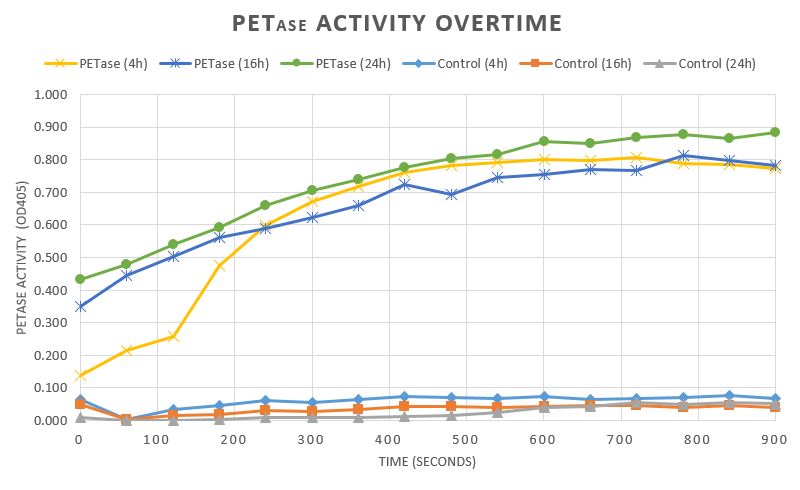 The difference of PETase activity among the 3 varying culture ages were not significant. One major observation point is that in culture grown for only 4 hours, the initial activities were lower. This might be due to the that the initial concentration of available PETase was lower as well.


Aside from that, we also tested PETase activity by directly applying our PET-degrading bacteria into PET bottle fragments. After 2 days of incubation, the fragments were visualized using Scanning Electron Microscope (SEM) techniques.

The results showed that the surface of PET fragments inoculated by PETase-containing cultures are rougher and have more cracks. This is most likely due to the activity of PETase. 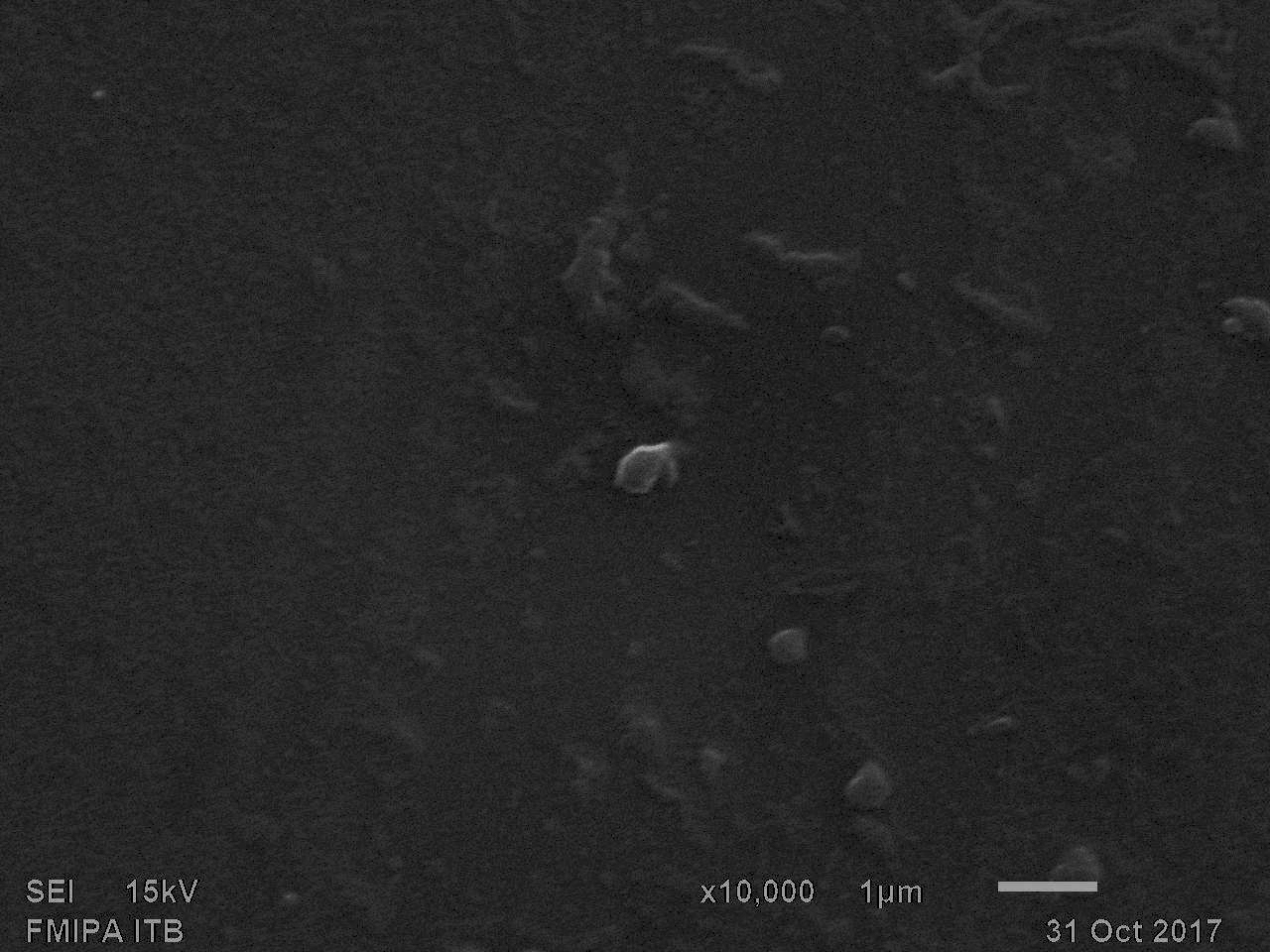 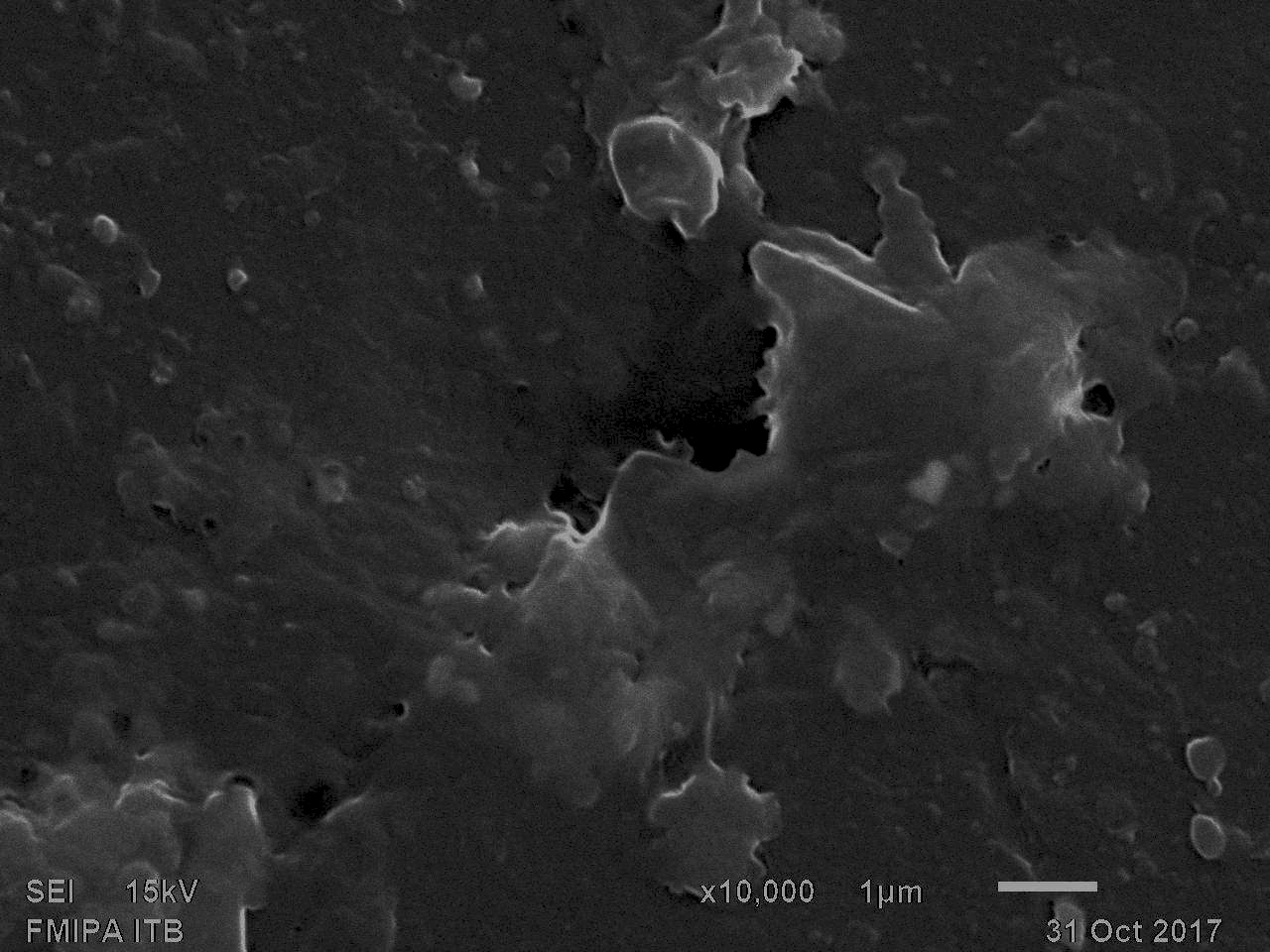 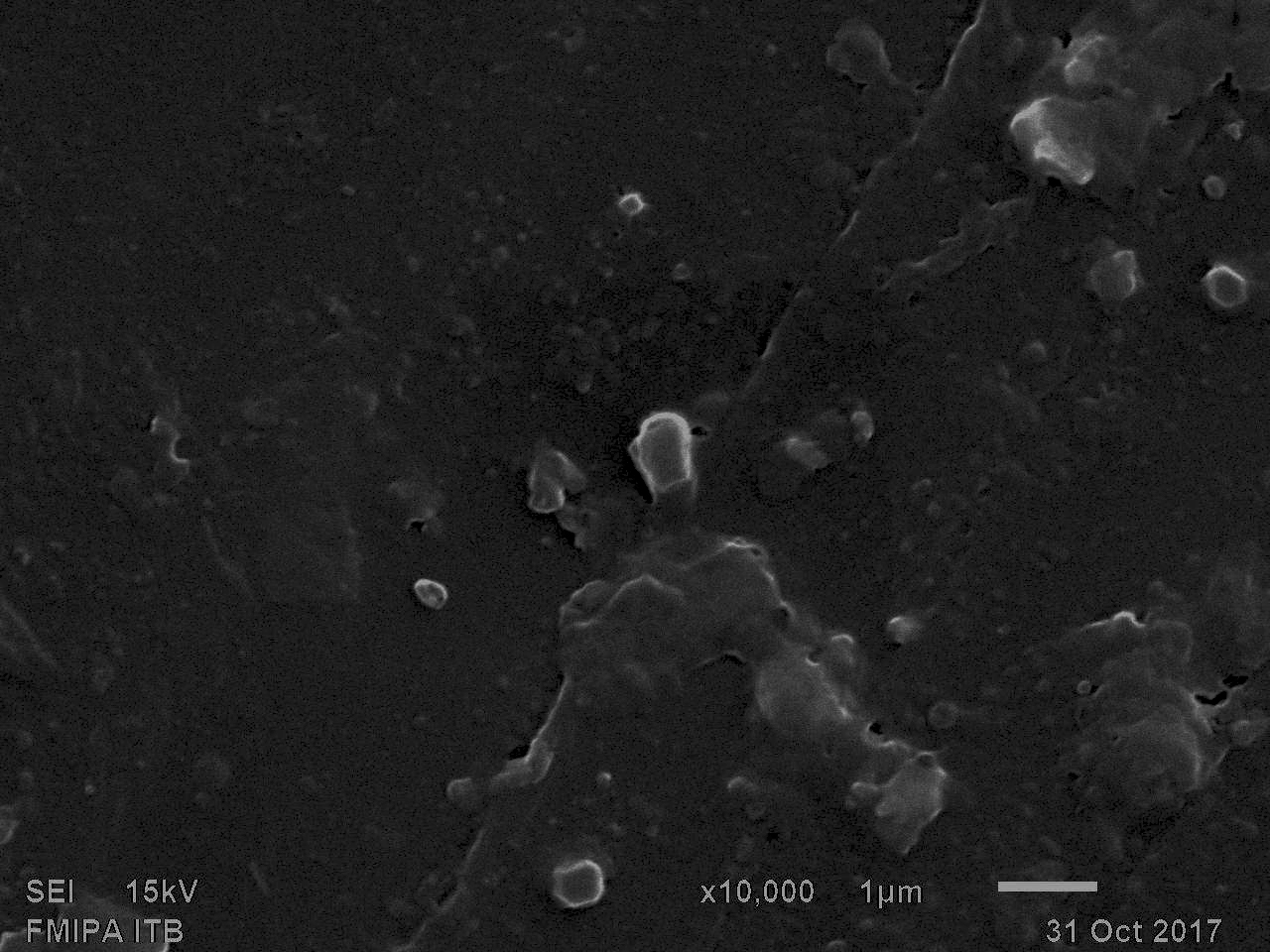 Although cannot be determined precisely with the limited amount of data collected, image processing of SEM results to measure pore sizes suggest that pore sizes in plastic fragments incubated with PETase culture are relatively bigger than pore sizes in culture incubated with PETase cultures with enhanced biofilm production (facilitated by NhaR). This phenomenon might be due to the fact that biofilm matrix can hamper the transfer of enzymes due to its low permeability, as suggested by the model we developed.

ITB_Indonesia iGEM team 2017 designed a PETase enzyme coding device consisting of NahR-pSal regulatory part which is commonly activated by salicylate induction. Beside salicylate, NahR-pSal regulatory system is also known to have a certain degree of responsiveness towards the presence of organic pollutants (OPs). This particular characteristic of NahR-pSal is utilized in iGEM 2017 Indonesia's project to detect the presence of plastic.

To test NahR-pSal regulatory system's inducibility, we induced the expression of PETase (measured using pNPB Assay) in two different ways; 1mM of salicylate, compared to direct use of organic pollutants from plastic surface as inducers.

The results showed that PETase expression can be induced using 1mM of salicylate. However, the the inducibility of NahR-pSal system using organic pollutants from plastic surface could not be determined due to the fact that although the expression PETase can be observed, the trend is not significantly different from uninduced culture. This is due to the fact that NahR-pSal regulatory system used might be leaky to a certain degree.

In order to adhere to plastic surfaces in the ocean, our genetically engineered bacteria need to be able to produce biofilm rapidly. We facilitate this ability by the means of NhaR gene. Expression of NhaR induces rapid production of biofilm. In order to observe the effect of NhaR in this part, we tested the rate of biofilm production of bacteria transformed with BBa_K2378006 containing NhaR compared to control bacteria without NhaR.

The experiment was done by growing bacterial cultures in a 96-well microtiter plate, and measuring its biofilm formation after 6, 12, 18, 24 hours of incubation.

The result shows a more rapid biofilm production in cultures transformed with this part containing NhaR compared to its control without NhaR. We can thus conclude that the function of our designed NhaR gene to enhance biofilm production works as intended. 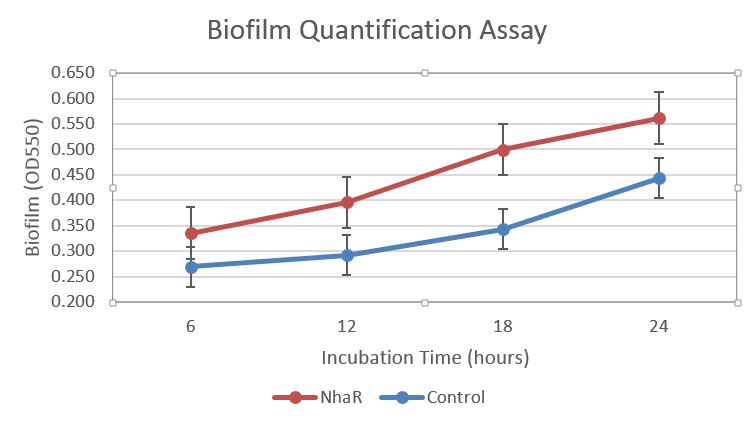