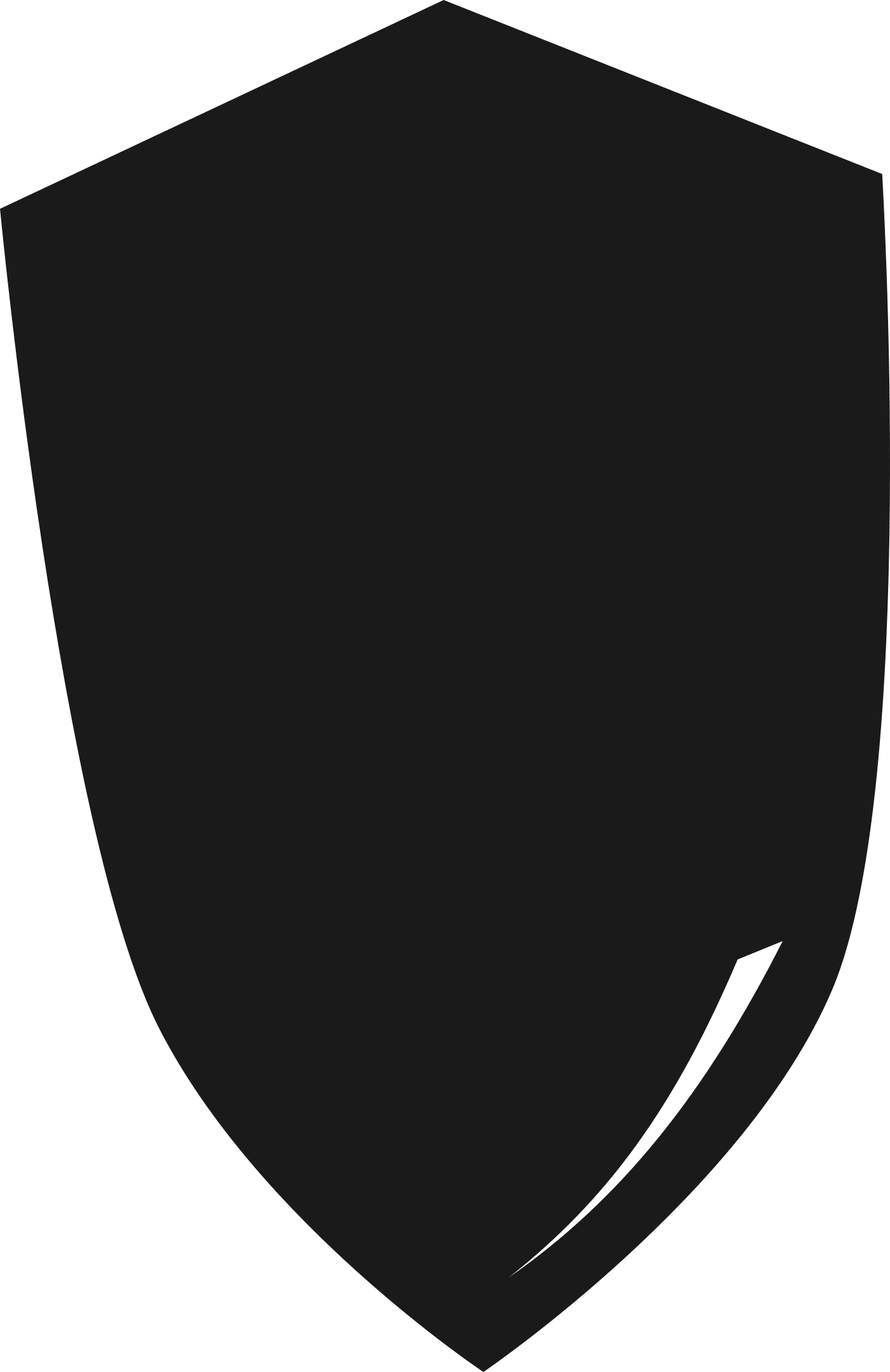 At iGEM, safety plays a decisive role. Our team took it so seriously that we not only tried to work with minimal risk in the laboratory, but went beyond by intensively studying how we should structure our project in order to ensure a safe application in the environment. In our laboratory, we simulated all possible realistically set scenarios for our project but never released genetically modified organisms into the environment. The safety concept for our project can be divided into four key aspects: Release, Organism and Parts, Antibiotic Resistance, Dialogue

How can the possibly negative environmental influence of our organisms be minimized? In cooperation with process engineers specialized in urban water management and the company GE Power we tackled this obstacle by developing a membrane module that prevents our organisms from invading the environment through waste water. (read more: Release)

In addition, we have selected a completely safe starting organism and have not altered by integrating possibly negative parts. Instead, we tried to achieve our goal with genes already existing in this form in plants that we only minimally changed. (read more: Organism and Parts)

When working with modified organisms, one should always consider the possibility of horizontal gene transfer, especially of an antibiotic resistance. From the beginning, we have carried out our project in such a way that our final organism is genetically modified, but does not carry any antibiotic resistance. (read more: Antibiotic Resistance)

Regardless of the safety precautions when dealing with a modified organism, the way the public views this new technology plays an important role in shaping the safety aspect of our project. For this purpose, we conducted a critical dialogue with students of different ages and from different school classes and discussed the use of such technologies in Germany with politicians responsible for safety regulations regulations for the use of such technologies in Germany. This political perspective was crucial for us to visualize how our project should look. (read more: Dialogue)

The cooperation with the WVER (Eifel-Rur Water Association (ger: Wasser-Verband Eifel-Rur)) made us aware of the importance to ensure the total retention of our microorganisms from entering the environment for application of our project.

As soon as the possibility of being discharged into the environment exists, one has to see the project very critically Dr. Brands

The drains deriving from the sewage treatment plant, which uses microorganisms for sewage purification, represent the transition of an area where GMO’s might be applied in high concentrations to the free environment, where no GMO’s at all are allowed. Our project fits this situation since, just like the sewage plant, we need to guarantee that 100% of the organisms are kept back.

The drain of the treatment plant is the interface between the wastewater [...] and the free environment. Dr. Jörrens

In sewage plants the micro-organisms settle as flakes on the soil in the secondary clarification process and the water can flow over them. Nevertheless, no cleaning process guarantees a 100% efficiency, because some bacteria are washed out with the waste water. In addition to this problem, yeasts do not form flakes that settle on the bottom of a basin, which is why we used a different method to show that no yeasts drain with the water.

We have developed a concept that is more effective than the sedimentation process of classical sewage treatment plants, following our research and the resulting discussions with the urban water management Aachen (read more: Integrated Human Practice)

A membrane module guarantees that no organisms can escape from the plant. An optional secondary module can be used to reduce the chance of escaping organisms even more, Dr. Palmowski recommended. On a smaller scale, to show that this principle works, we have carried out a text experiment with a membrane module. ( read more: Applied Design, Demonstrate)

A membrane system would definitely keep that back. If you want to be 100%, or 120% sure, you would probably follow that up by another membrane, but actually the membrane,if it is leakproof, can hold it all back. Dr. Palmowski 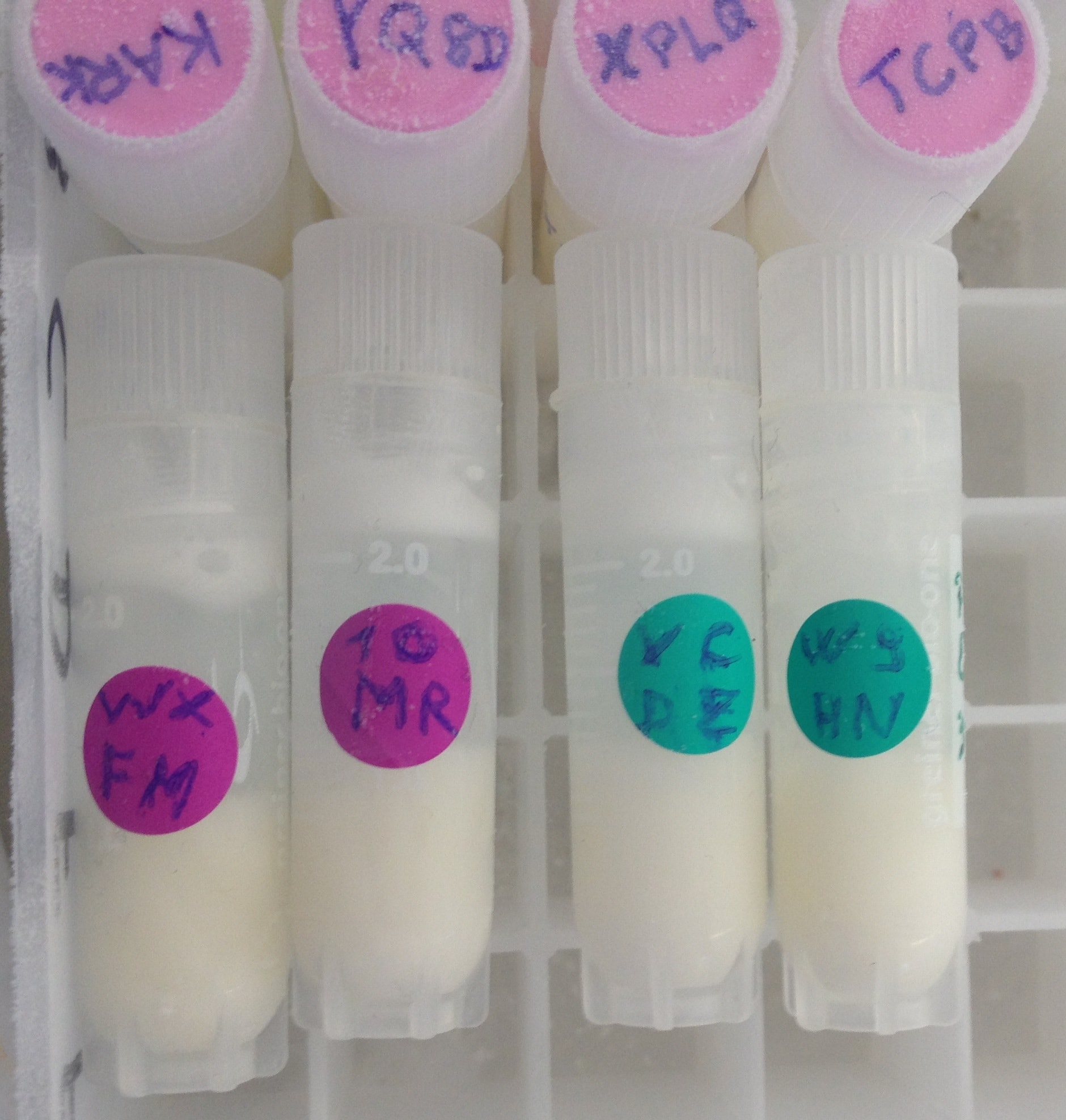 When carrying out a project of synthetic biology, one must always consider how safe the project is for its members and to the external world. These safety parameters can be controlled to better adapt them to the project. The strain we used from the model S1 organism S. cerevisiae BY4742 had several auxotrophic mutations which we used for our selective advantage. Only 2 different antibiotic resistance genes, G418 and hygromycin, were used throughout our project. We used the “LoxP” and genome editing system, based on “Easy Clone” system, in order to guarantee that our final organism, when used in industrial applications, doesn't carry plasmids or antibiotic resistances at all. This minimizes or avoid gene transfer to harmful, pathogenic organisms. In addition to that, our whole “salt uptake” system is based on non-harmful genes originating from the plant Arabidopsis thaliana. 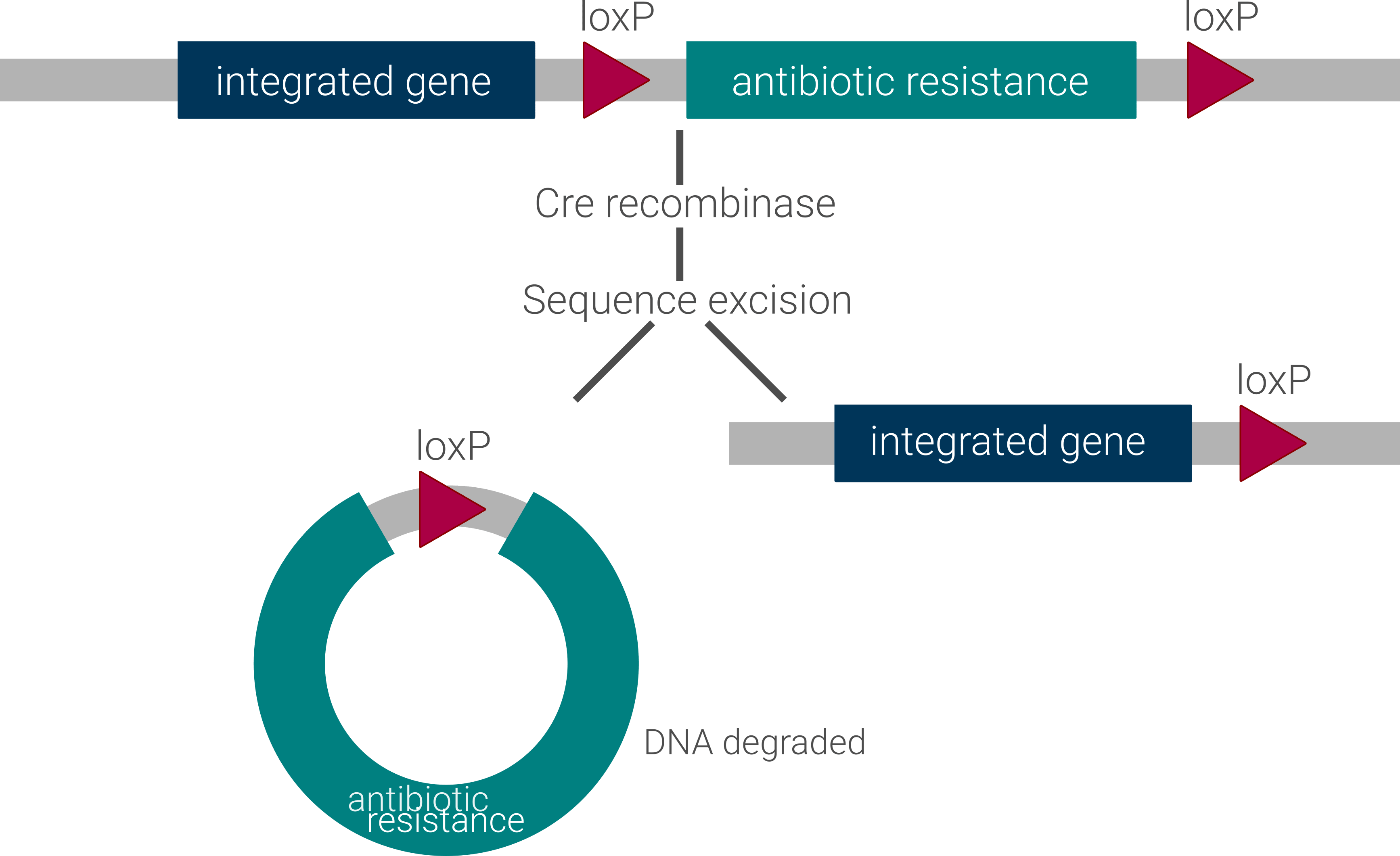 Our transformed organisms are intended to interact with the environment and being in contact with other microorganisms. To avoid any unintended antibiotic resistance gene transfer, we decided to remove these genes completely. In order to do so without removing our transformated genes, we used the CreLox recombination system.

Whether you are inserting or removing a gene, the CreLox system can be adapted to fit the procedure`s purpose. A protein called Cre recombinase identifies a specific sequence in a DNA strand called the loxP site. Inside of the 34bp long loxP site are eight palindromic base pairs; this is where the recombination occurs. When this protein encounters two loxP sites located in different DNA strands it separates the strands and joins the loxP sites from one DNA strand to the other, building a so-called Holliday junction. The strands are then clipped, integrating one gene into the other strand in between the loxP sites. Deletion works in a similar manner, just the other way around. The two loxP sites found alongside a gene bind with a Cre recombinase. At the end of the process a circular DNA is build containing the gene in between the loxP sites while the gene from which it was deleted just contains a loxP site.

We had to adapt this system to two different genomic transformations; knockout, or gene deletion, and integration. Our “KO” cassettes contained a marker gene (antibiotic) in between the sites homologue to those surrounding the gene we wanted to delete. We placed a loxP site on each side in between the marker gene and the homologous regions. Once the transformation and selection had worked, we removed the resistance using the CreLox system. In the genomic integration cassette, the loxP sites weren´t beside the homologous regions, they were directly beside the marker gene. What we ended up with are completely transformed cells without any of the antibiotic resistance genes used to mark them.

Transformations performed using plasmids, especially in prokaryotes, are likely to be transferred horizontally to other cells. This can present a serious threat when a transferred plasmid containing antibiotic resistance is collected by a pathogenic strain. Being a model organism, S. cerevisiae presents a special DNA repair system in which missing chromosomal DNA genes are replaced by a copy of a sister chromosome when destroyed through external stress.

Using this repair system to our advantage, we decided to use genetic material found in the Easy Clone plasmids. These sequences are homologous to highly conserved regions within the yeast´s chromosomes. We successfully transformed a competent S. cerevisiae strain BY4742 by placing our genes in between this homologous regions, taking advantage of the repair system to integrate the cassette through homologous recombination. The resulting mutant contains transformed chromosomes with no plasmid or extrachromosomal DNA, therefore avoiding therefore unwanted horizontal gene transfer. (read more: Design, Workflow)

Although we do not want to implement our organism into a sewage treatment plant, the problems with antibiotic resistance are comparable.

A discussion that is being conducted is the question of whether an increased release of such resistances into the environment takes place where the sewage treatment plant runs into the water. [...] The studies carried out on the subject of antibiotic resistance show that a gene transfer in biology definitely takes place. […] And the spread of these [antibiotic resistances] is the point of criticism Dr. Jörrens

Although we worked with them in our laboratory we used systems that can guarantee that our final GMO carries no plasmids or antibiotic resistances (see: Organism, Methods and Parts). In addition to that we developed a membrane system to ensure that no organisms can move out of our system into the free environment of a river. (see: Release) 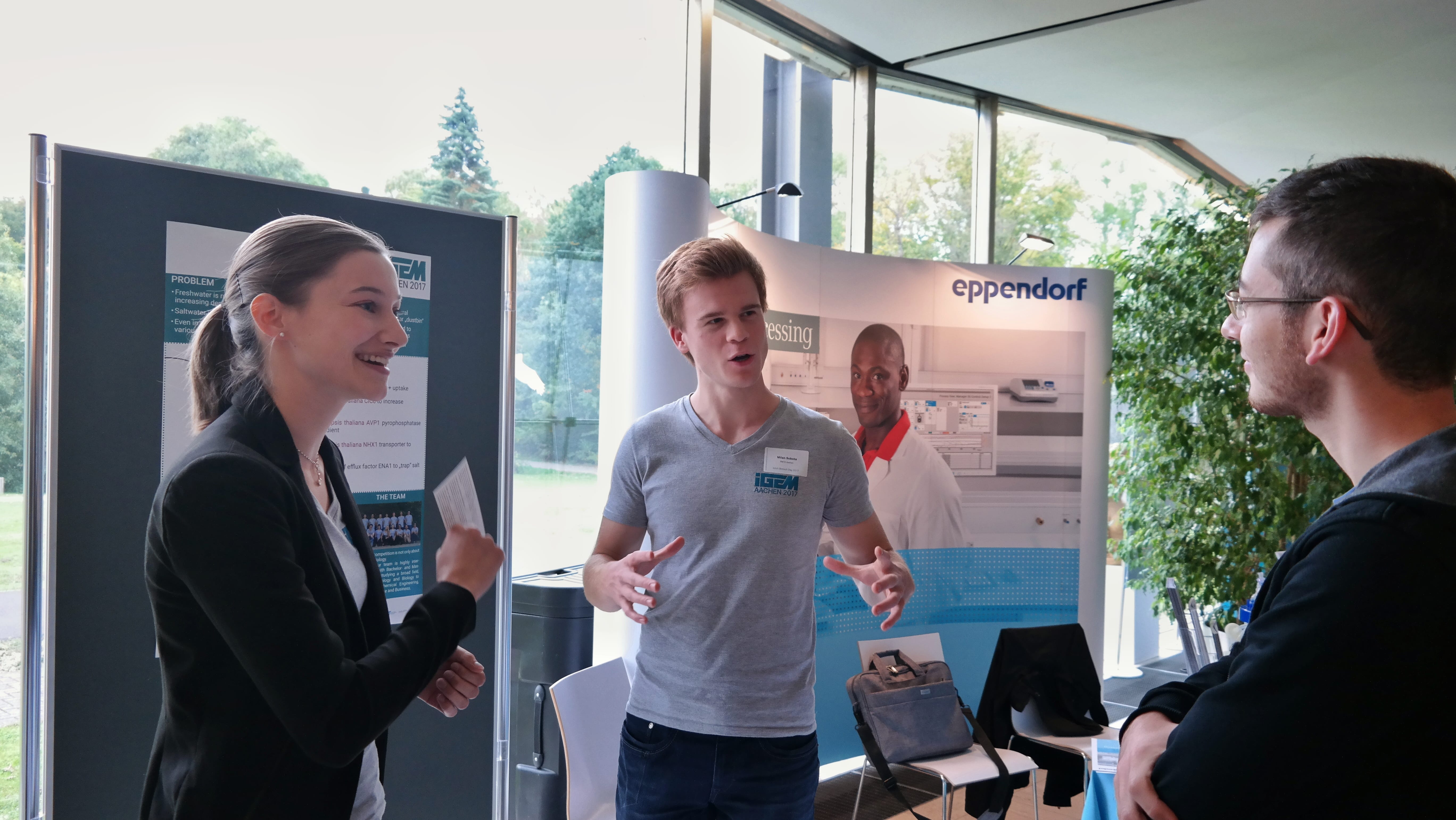 “Green Genetic Engineering” is, especially in Germany, a delicate and often negatively seen concept in society. The lack of information regarding this topic causes the society to alienate this concept and feel rather uneasy when discussing it. We wanted to tackle this problem by informing the society about synthetic biology and integrate their views and opinions when deciding on how new technology should be regulated.

We knew listening to concerns and answering questions wouldn´t cut it, that´s why we wanted to involve citizens in the debate on the use of this technology, especially in the field of environmental protection. The focus of this discussion has been on politics and on schools, which are the central pillars of our society, especially when it comes to future technologies such as synthetic biology. 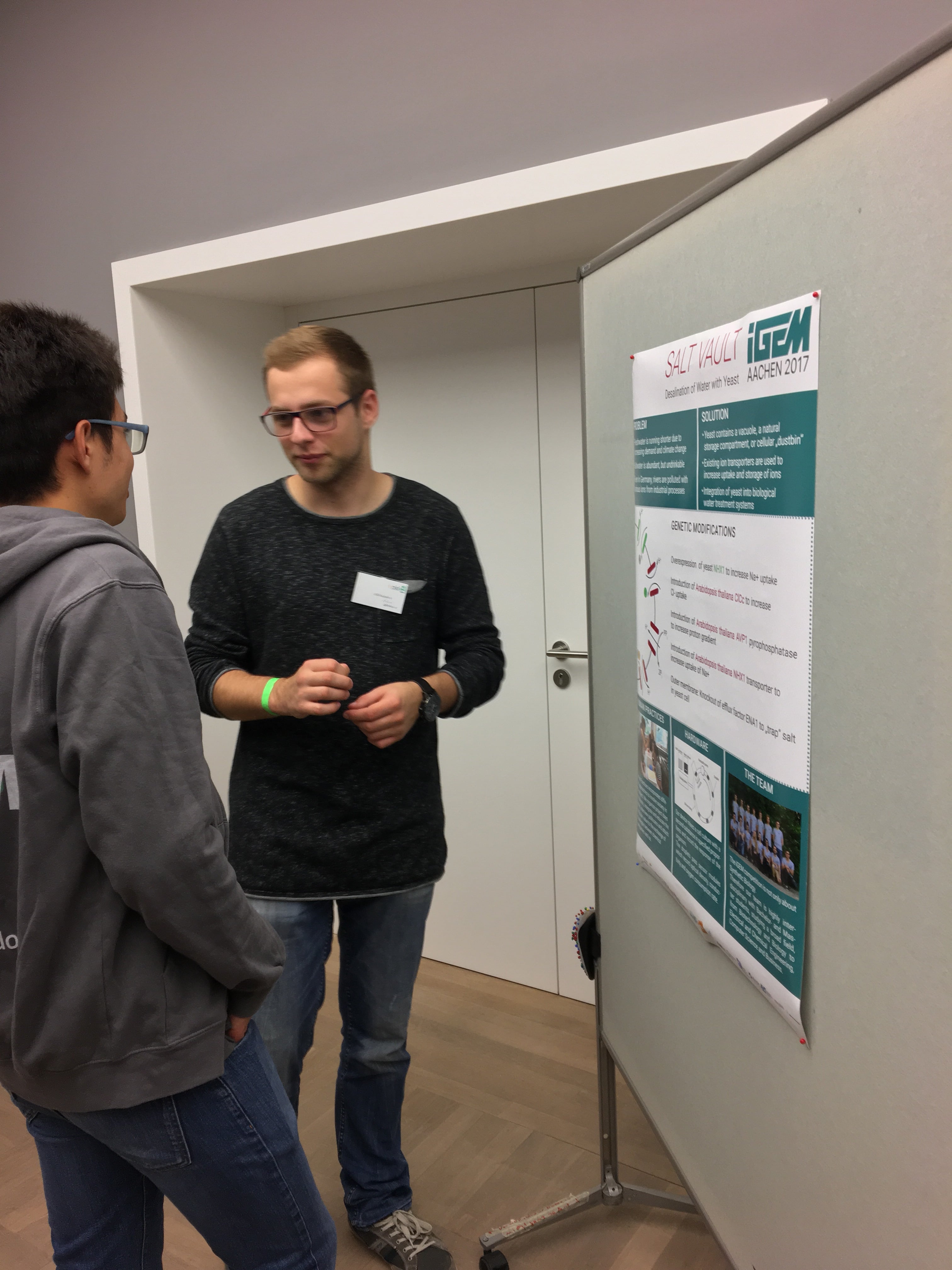 In schools, we got a detailed picture of what students think about GMOs with a survey in five classes. Similar questions were asked to various politicians and experts in the field of water and chemical industry, giving us a very precise insight into the opinion on this technology outside of our laboratory. With these findings, we carried out several school projects in different classes of different age groups (read more: Human Practices) in order to bring this new science closer to the students.

Our intention wasn´t to influence the minds of the students, but to teach them about what we were and are doing about the types of applications synthetic biology could offer. We encouraged students to form their own opinions about the topic through critical thinking. The project offered an insight into genetic engineering and synthetic biology which would otherwise not be learned at school.

The discussions we had with politicians from different parties were mainly concerned with how synthetic biology includes politics in our country. Our team was interested in finding out what mistakes were made when Green Genetic Engineering was tabooed in Germany and we were encouraged to learn from these experiences. (read more: Shaping Polictics)