One of the many brilliant parts about iGEM is that besides being in the lab you get to do outreach projects. Considering the impact of your work, further consequences and safety is an essential part of scientific work.

At this point in time the phrase “synthetic biology” often invokes the image of mad scientists trying to play god or destroying our beloved nature. When people think about genetic engineering they see spooky laboratories and some form of witchery being done behind closed doors. This makes outreach an inevitable part of iGEM. We think that iGEM gives us, young students from all over the world, the opportunity to change this image! Without any doubt risks and safety have to be considered, and this is another big part of iGEM as each team has to fill out safety forms and be considerate about their work.
But right now people are still doubting all the advantages of genetic engineering. We thought it might be a great idea if as many teams as possible joined forces and created a simple thing which reaches a big community.

This is where our postcards fit in. We wrote to a whole lot of teams to get them to take part and tried to get as many teams on board as possible. Fortunately, many teams were as enthusiastic about this as we were! 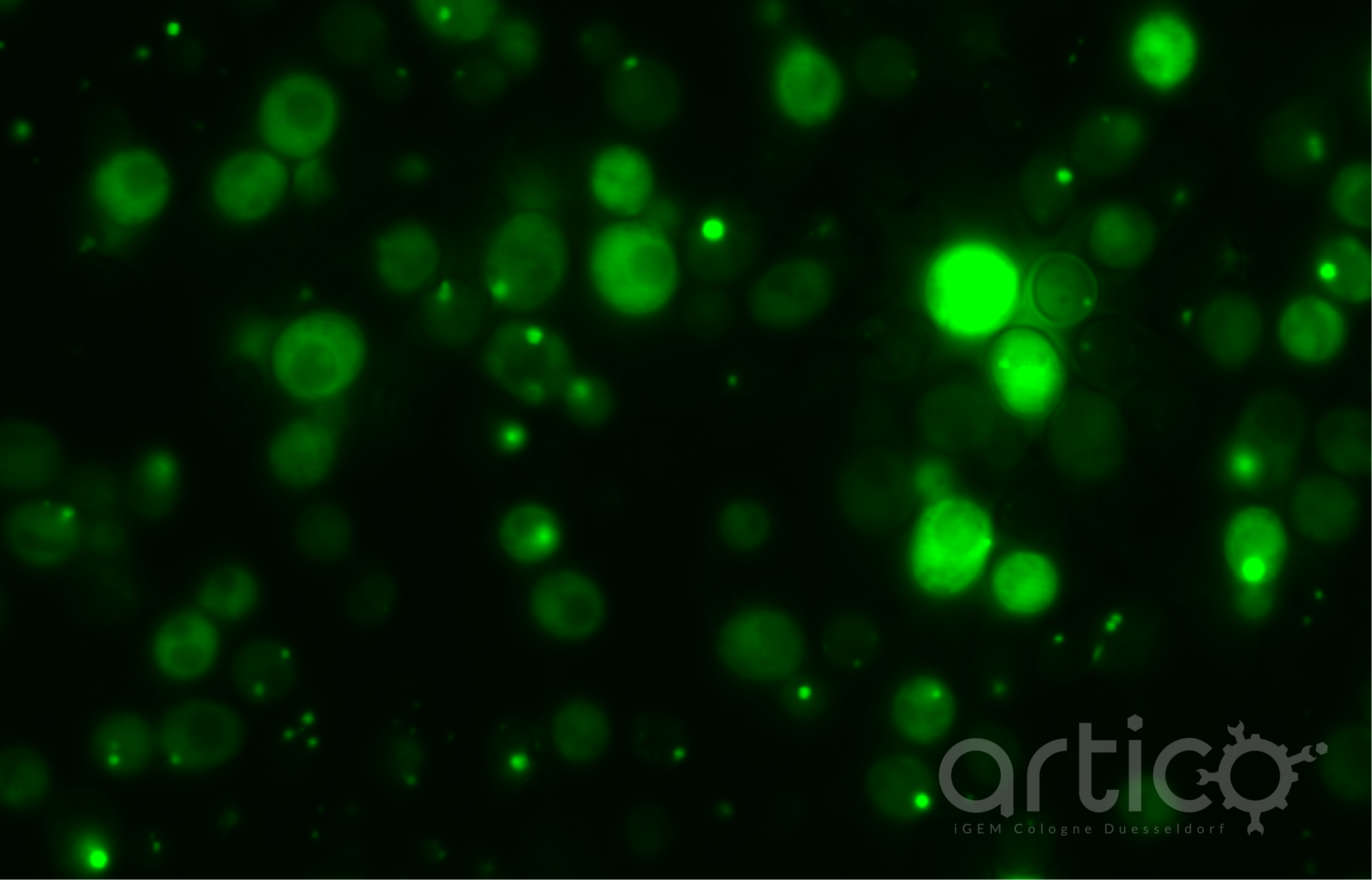 Last year's iGEM Team Duesseldorf started a postcard campaign which included seven german teams and the postcards were a great success. This year we wanted to create an even bigger campaign. At first we wanted it to be all over Europe, but after we put our campaign up on the collaboration page of iGEM, teams from all over the world asked us if they could join. We were quite surprised but loved the idea of a worldwide postcard campaign. In total, 28 teams took part in the campaign. Each team designed their own postcard with an image relating to synthetic biology in general or even their own project. On the back of the postcards you could often find a little text explaining the front of the card.

As we were the ones that started and organized this campaign, all teams sent us their postcards. So in the time it took all the cards to arrive our room was transformed into a post office and we became a regular at the actual post office to collect all the little presents we received. Each time a package of postcards arrived it felt like opening a present as we were all excited about how the different postcards would look. Oftentimes there even was a little treat for us, like sweets or a letter, contained in the boxes. These really made our days.
A few teams wanted to participate but couldn’t afford printing and sending the postcards, so we offered to print their designs from our own funds so they could be a part of this campaign.
After a few weeks the time finally came when all postcards had arrived. So we transformed our room into a Christmas workshop and started packing boxes, including all the different postcards we received, and sent them to all participating teams. 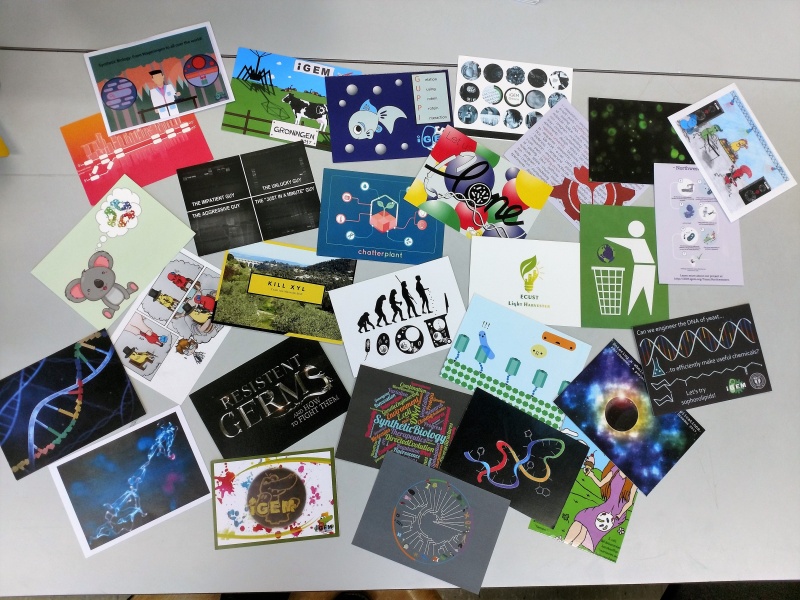 Afterwards all the postcards could be shared at public events. We distributed them in the Old town of Duesseldorf and at our synthetic biology meetup in the house of the university.

We want to thank all participating teams for making this postcard campaign as great as it is. We really appreciate all of your work and are proud that all these teams joined forces to bring synthetic biology closer to the public! If you are curious what all the different postcards look like come visit our poster in Zone 5, 268 and see all of them.

The synbio community is growing fast in Germany. As we are delighted by this development we wanted to support it. Therefore, we organised a Synbio-Meet up in Duessedorf to inform people about synthetic biology and to spread our iGEM spirit.
To provide a direct insight in this interesting field of research and to make it as accessible as possible for all audiencences, we invited different researchers who are working in the field of synthetic biology.

The event was held in the Haus der Universität in Duesseldorf and we were proud that seven researchers and three iGEM teams presented their projects . Our PI Prof. Dr. Matias Zurbriggen introduced the event with a talk about: What is Synthetic Biology? Having this information in mind the audience was prepared for the following talks which focused on very diverse topics including optogenetics, technology and artificial photosynthesis. Of course we also informed people about the iGEM competition.
Furthermore we invited various iGEM teams from Germany to attend our event and were glad that iGEM Aachen, Bielefeld and Stuttgart showed up and gave a talk about their projects. All the talks dealt with so many different questions but contained one big message – synthetic biology is the future!
Finally we organized an ethical debate where the whole audience was included. One main question was how scientists can inform the public about their research and how we can reduce the fear many people have regarding synthetic biology and genetic engineering.

The Synbio Meetup was very successful with many attendees and a lot of scientific exchange. We were really excited that so many people are interested in synthetic biology and we hope everyone got a take home message. 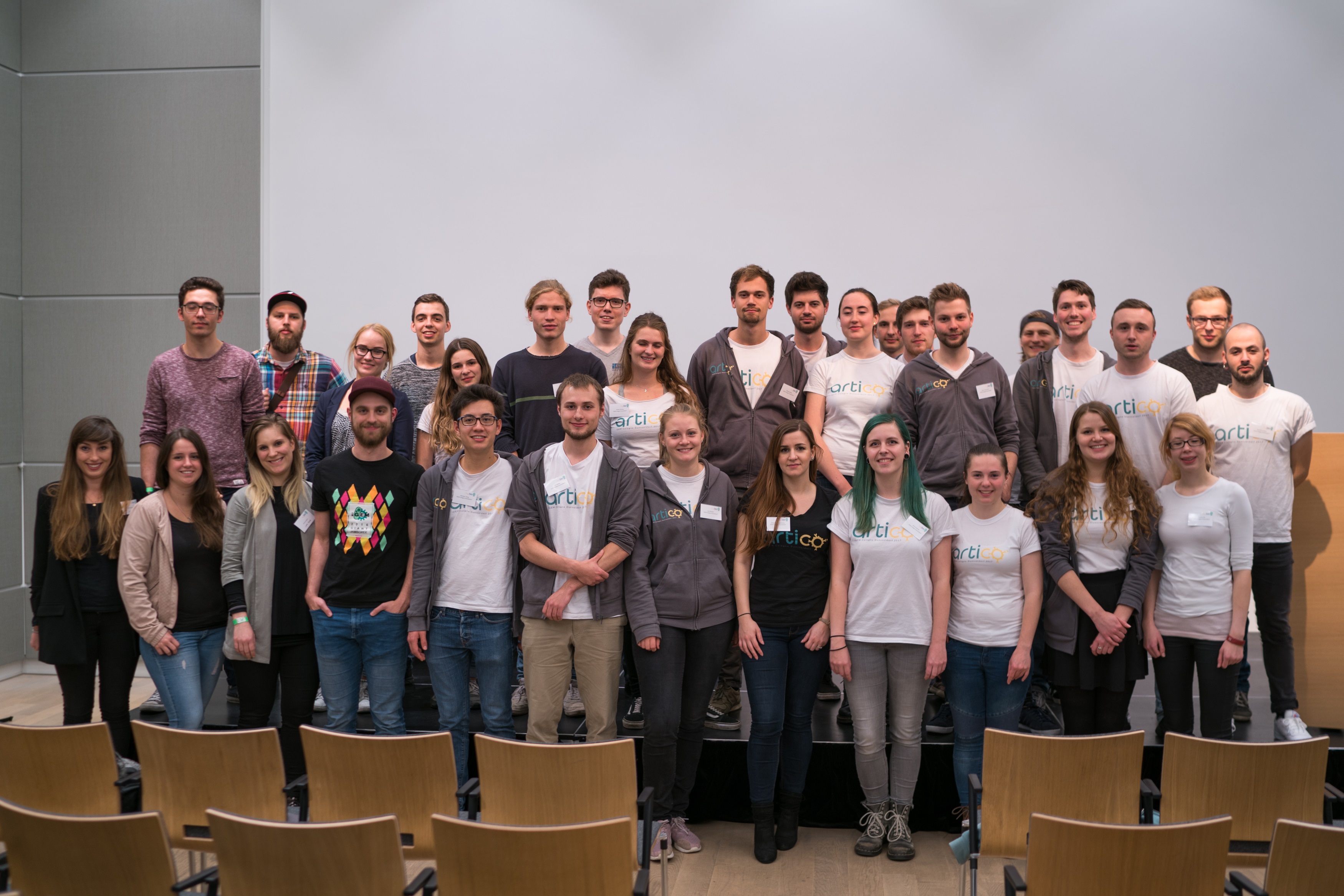 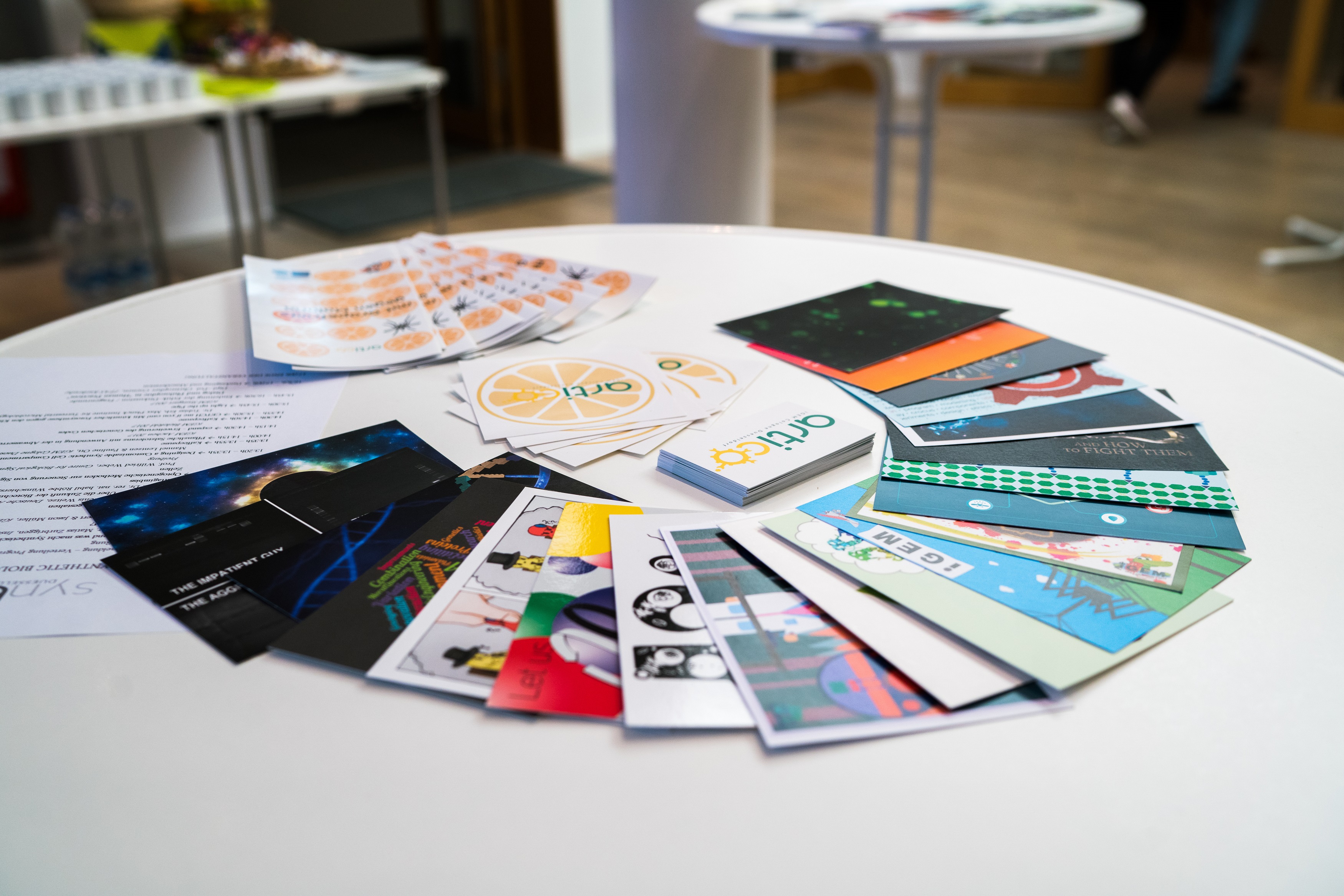 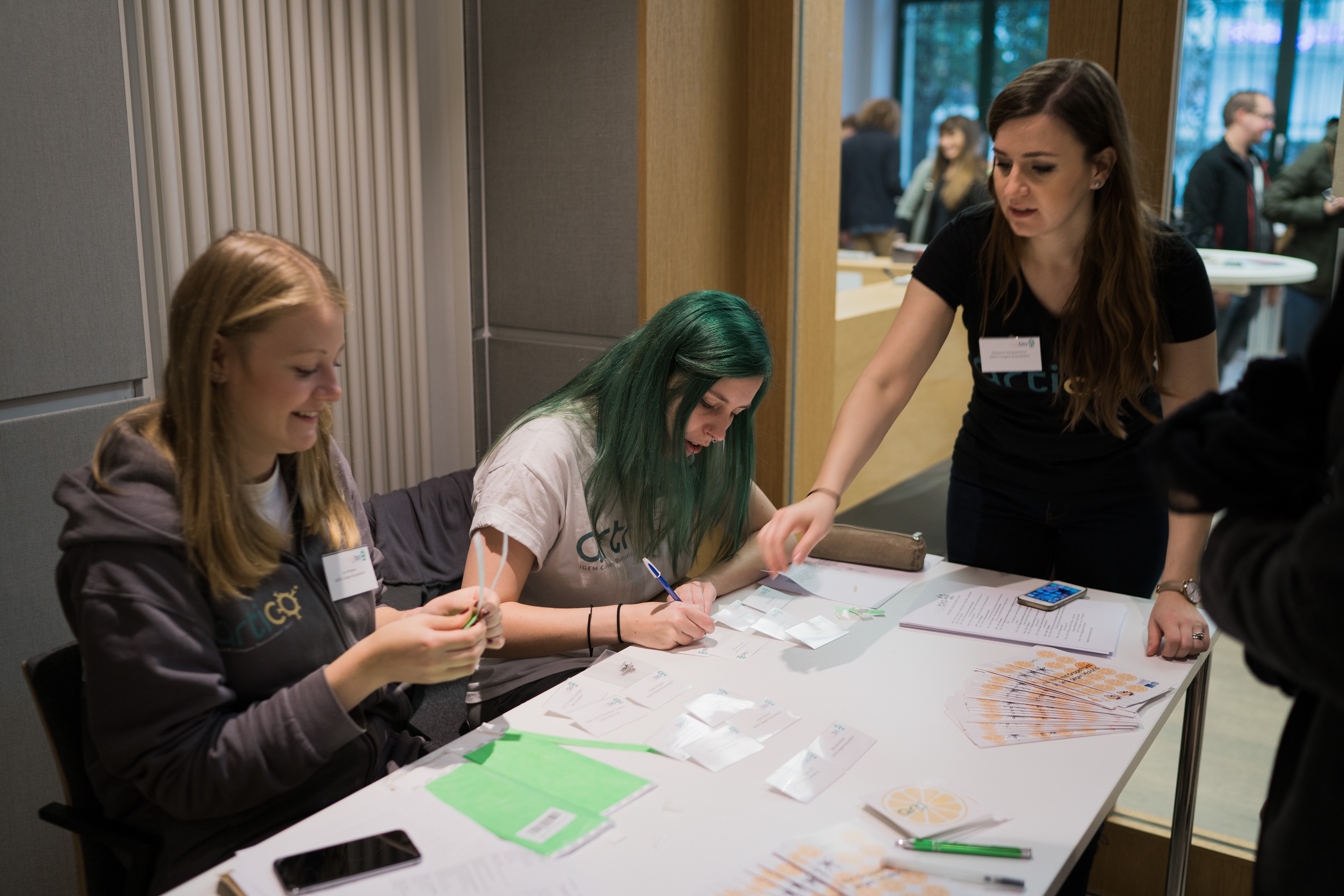 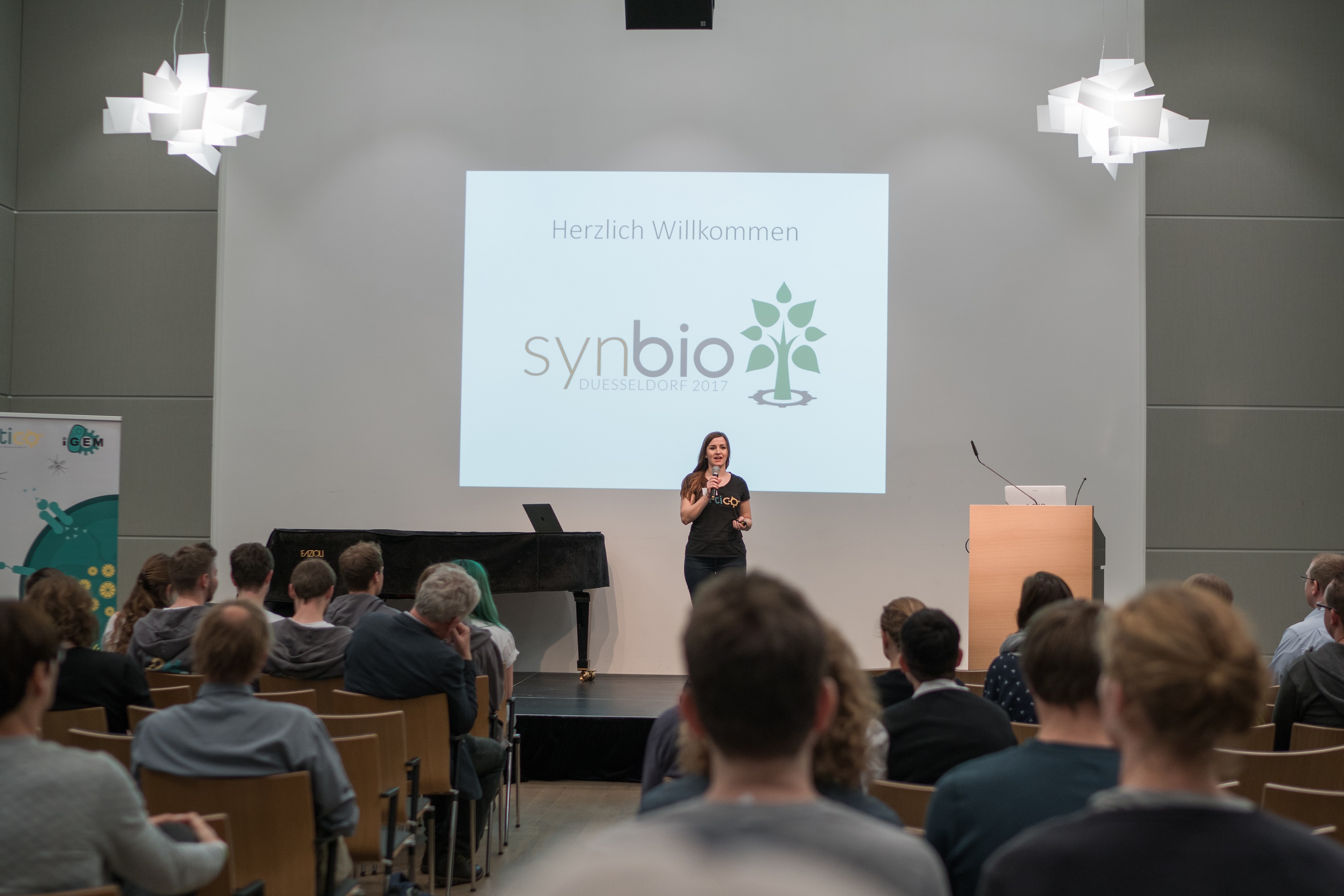 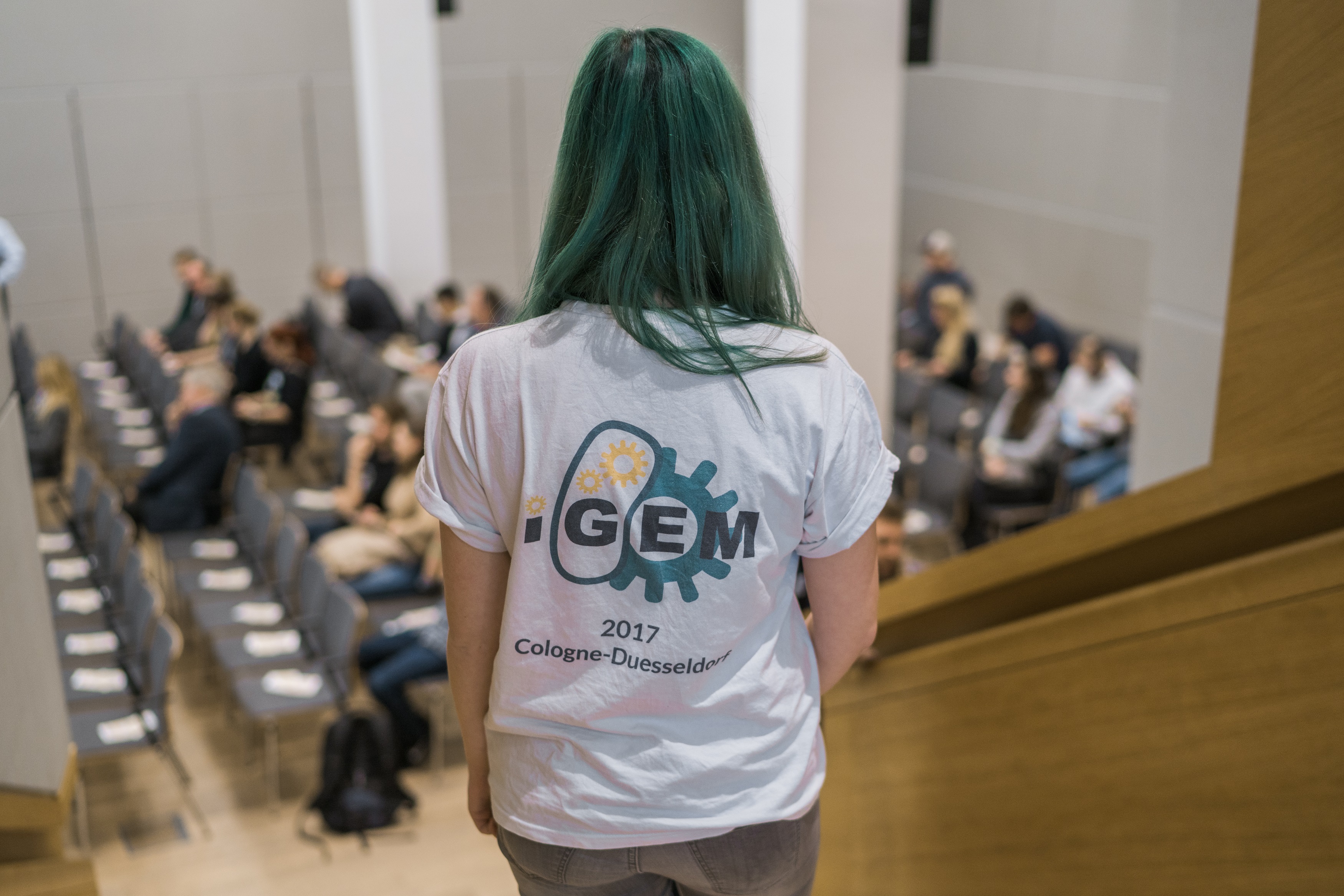 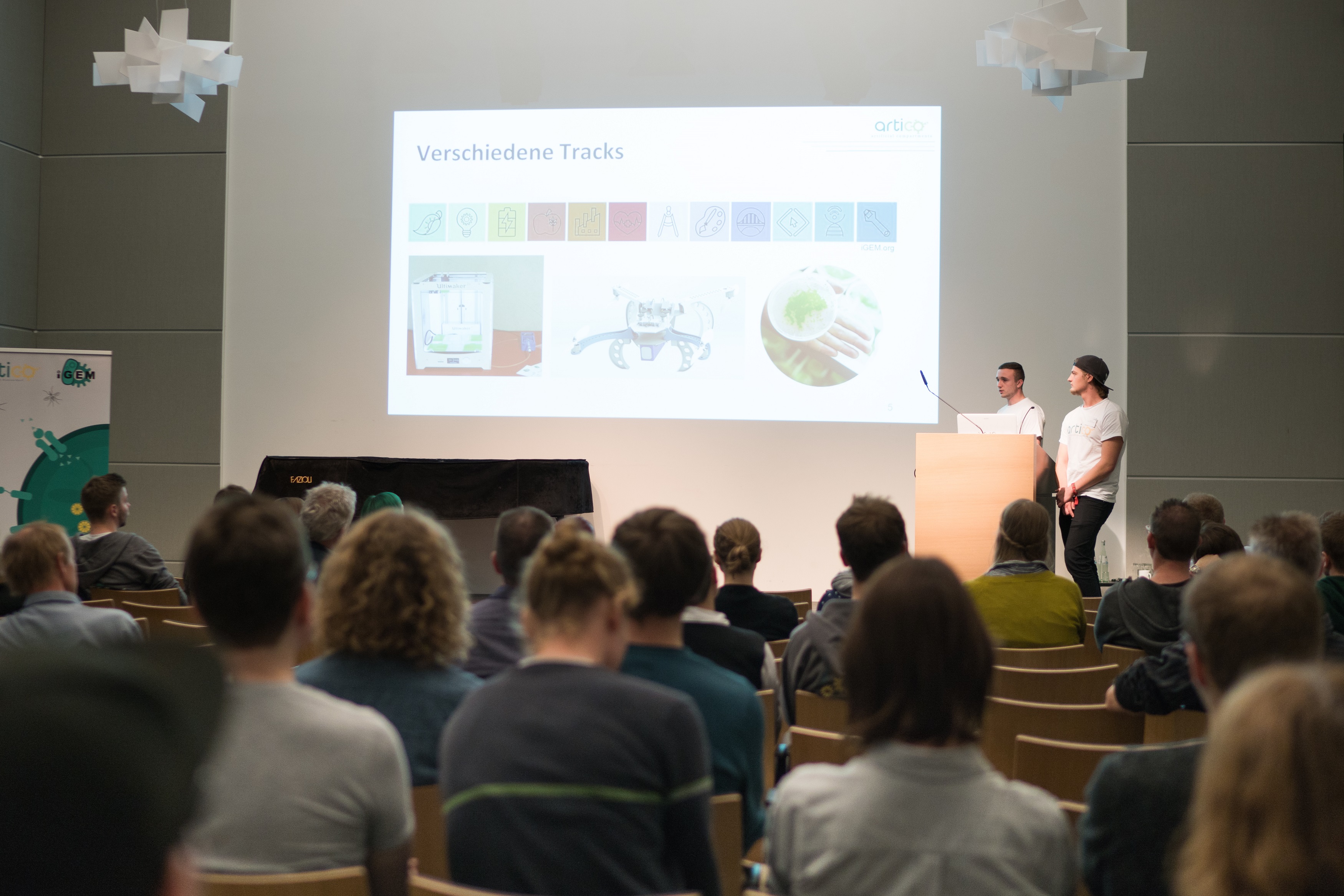 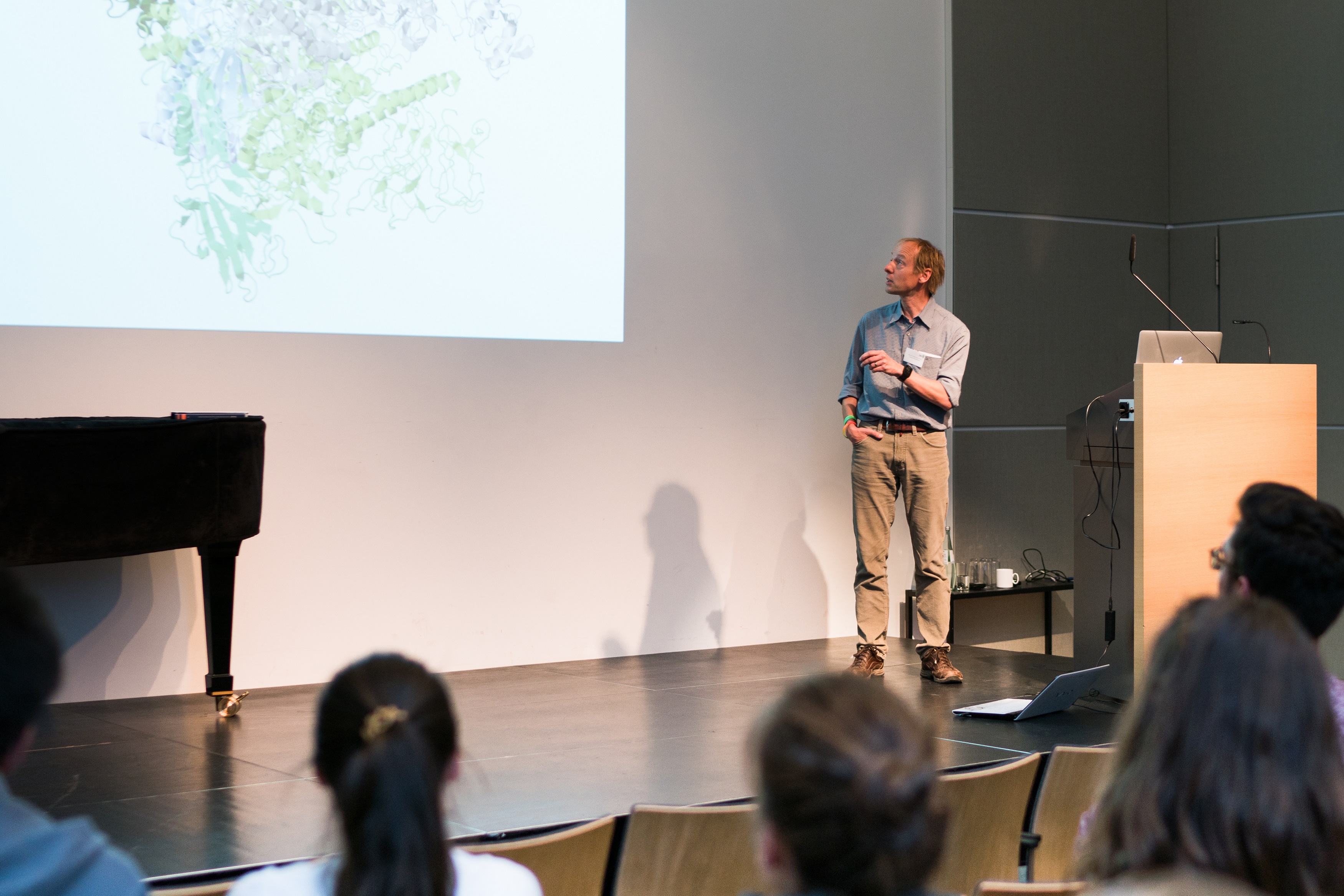 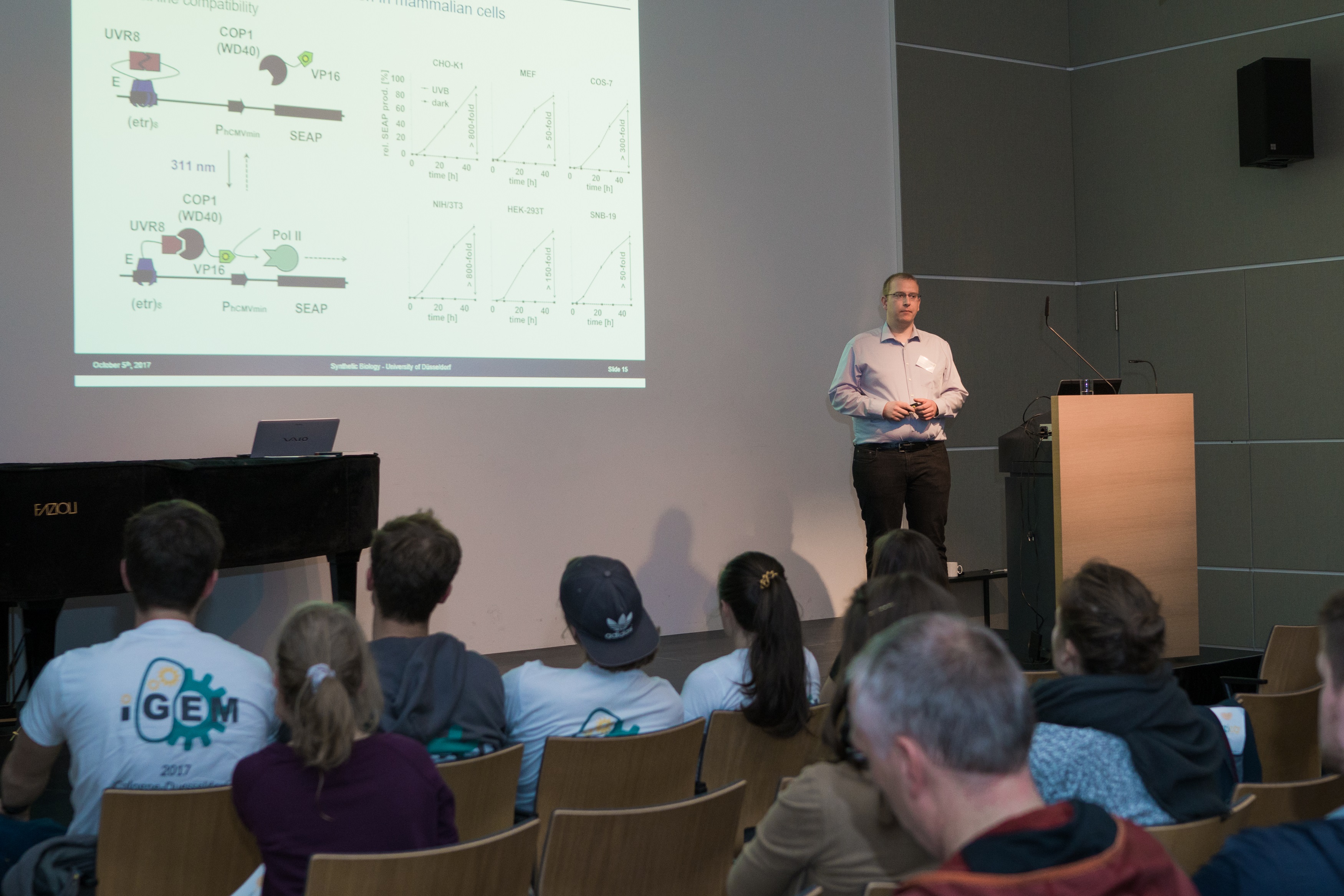 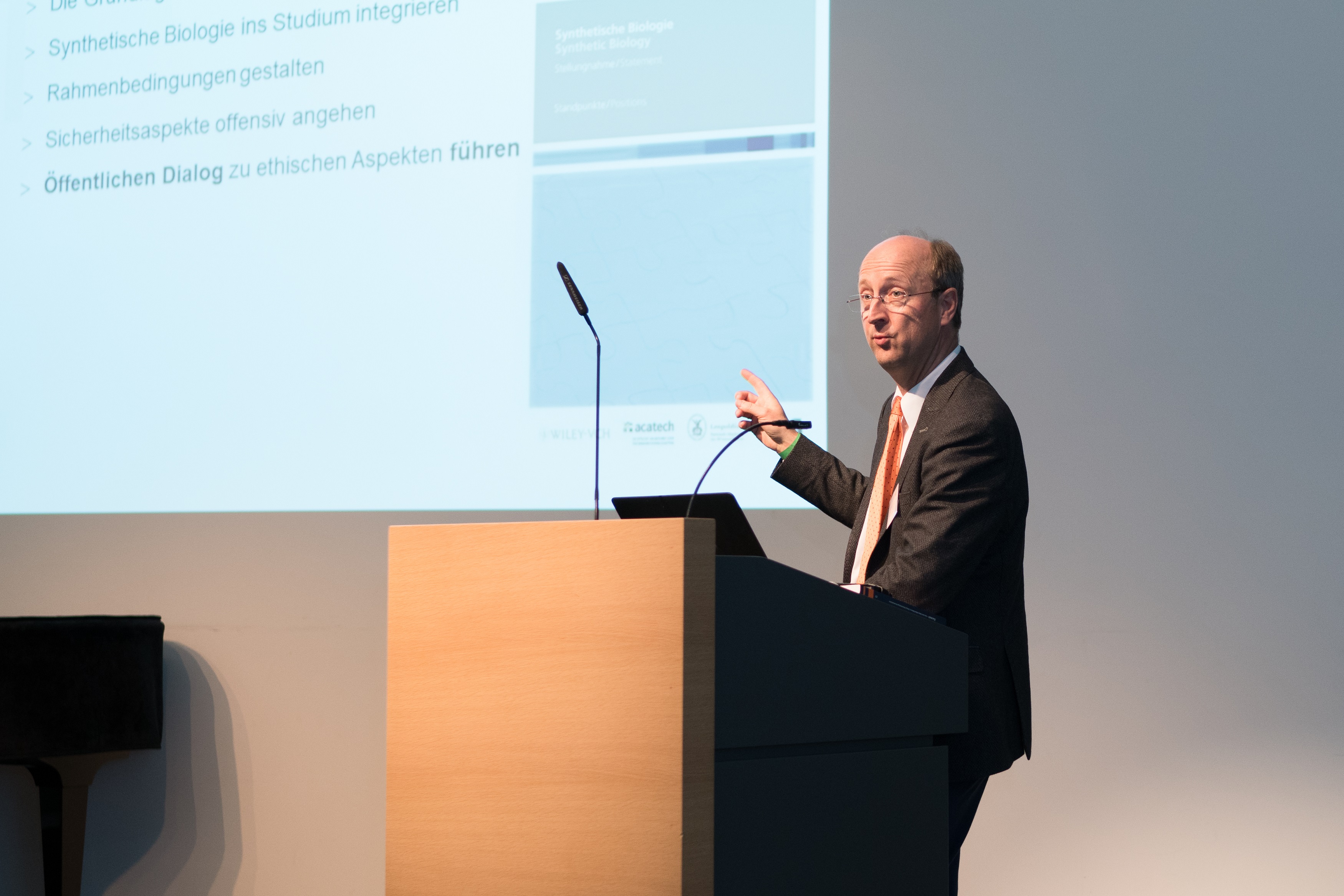 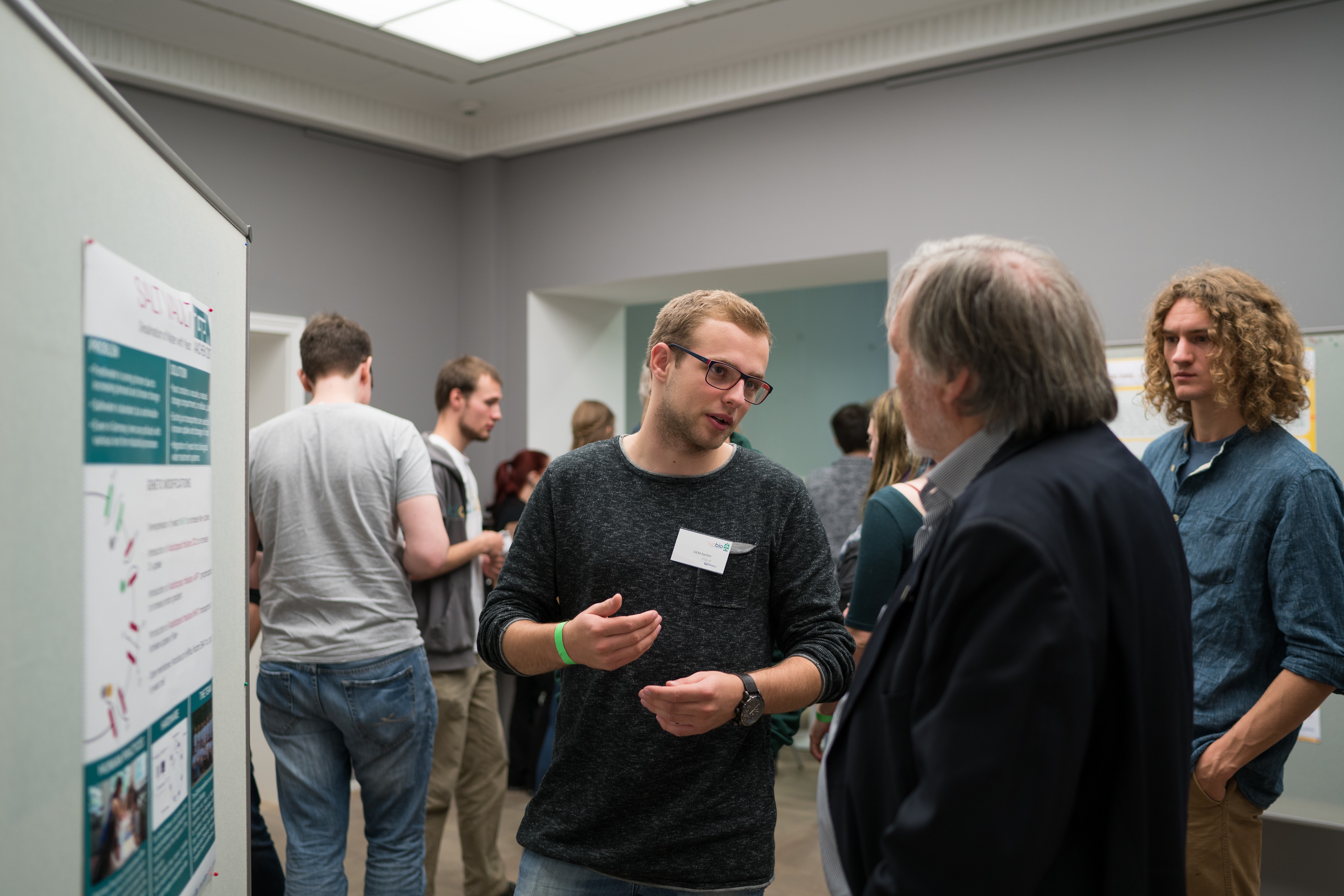 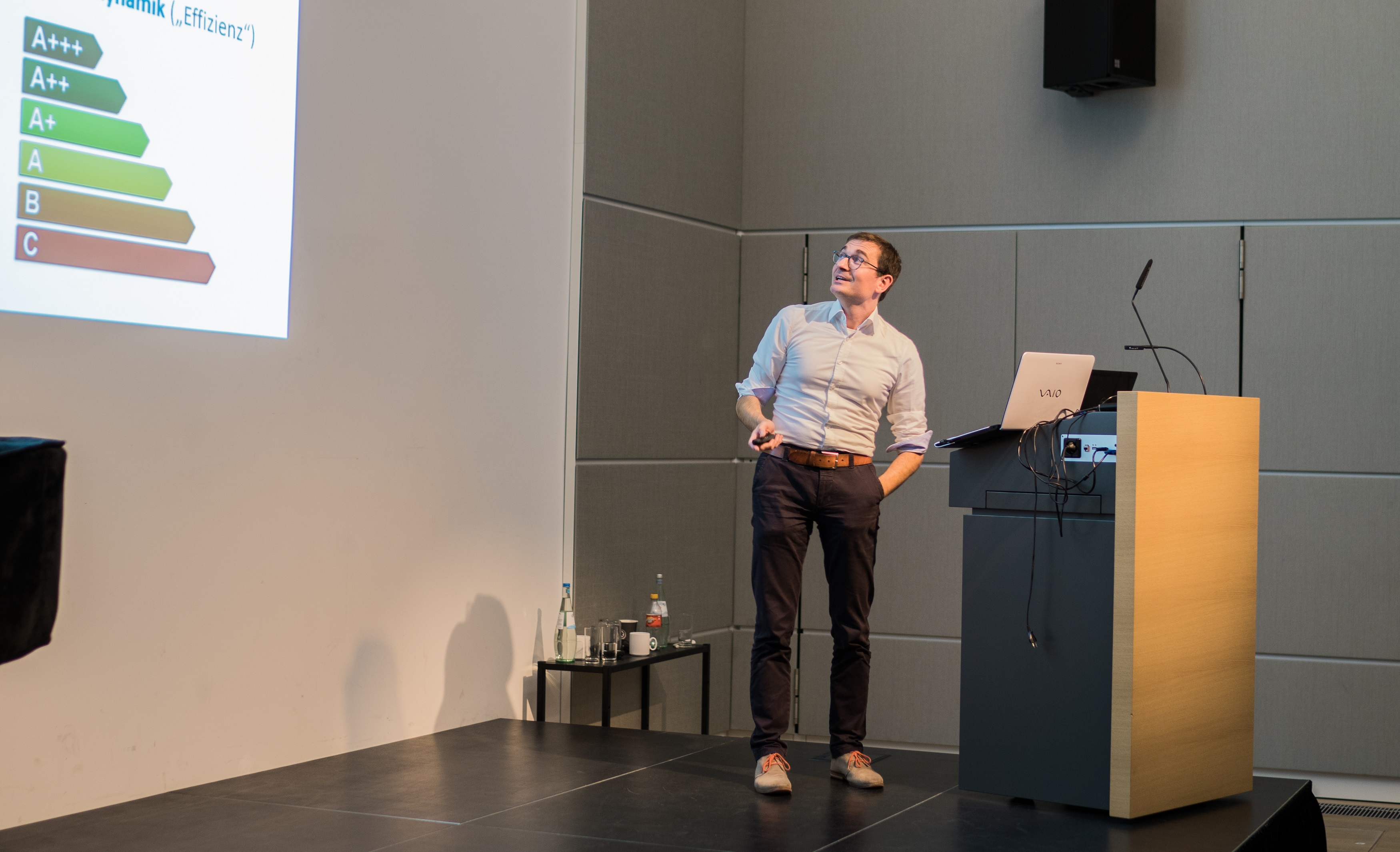 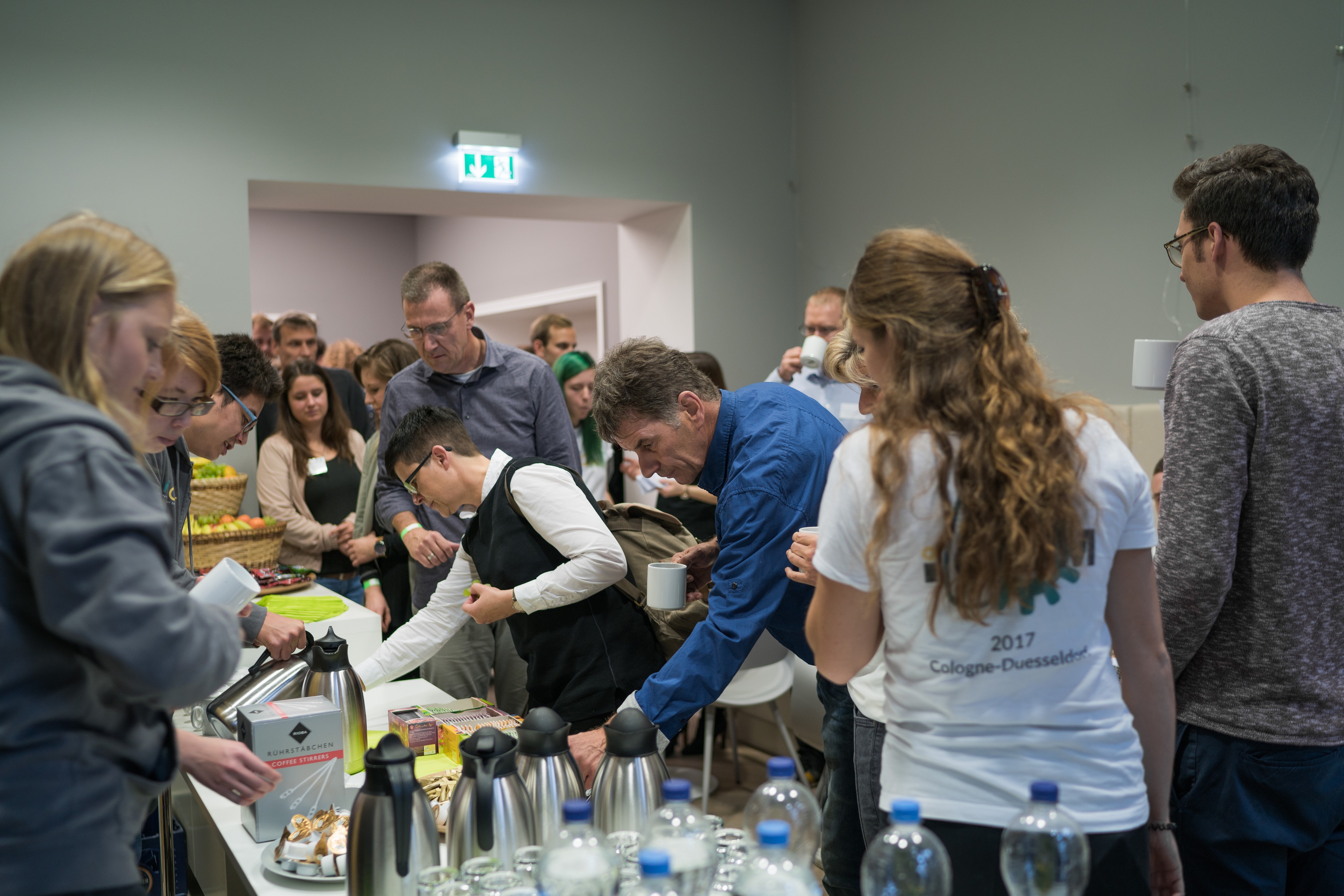 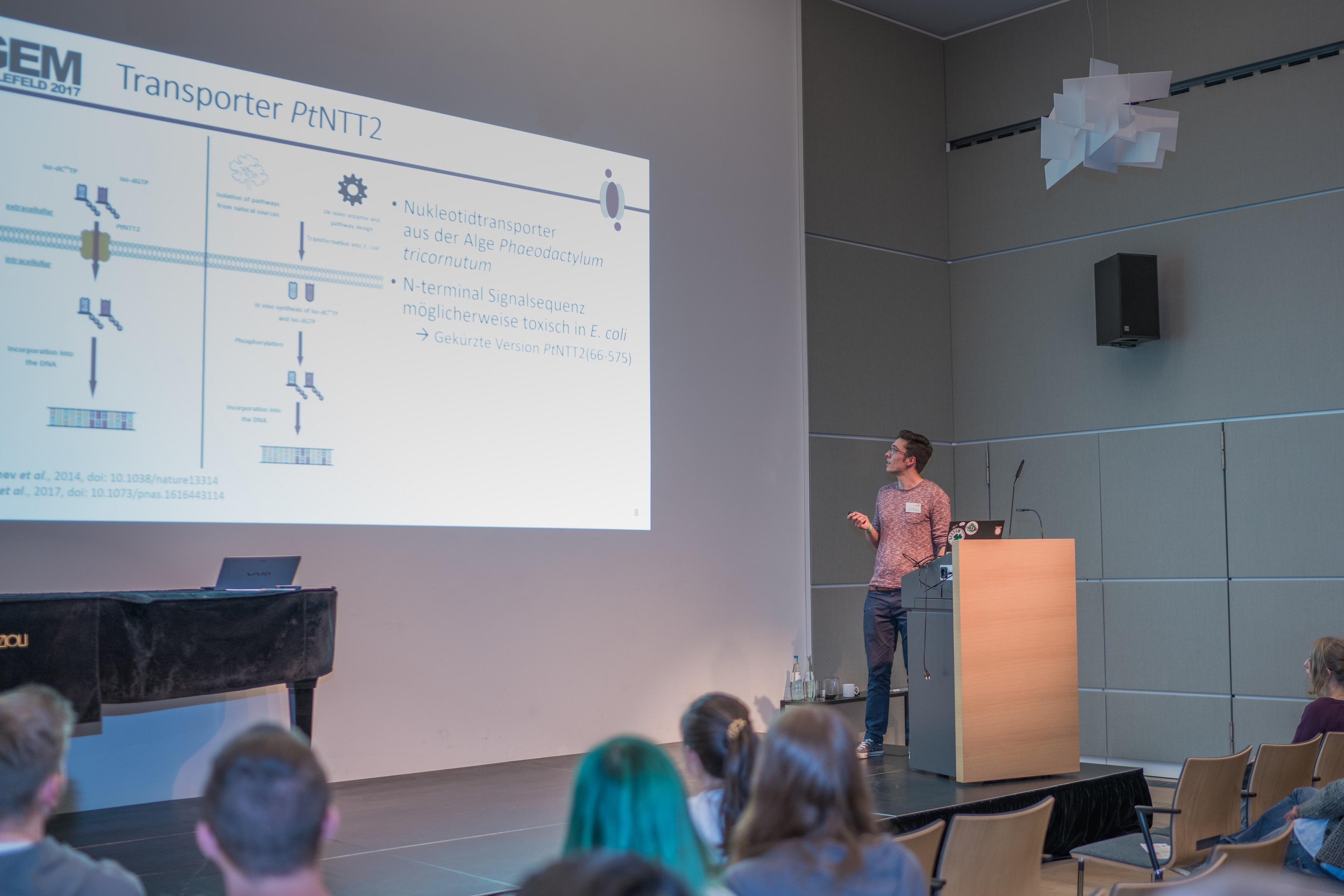 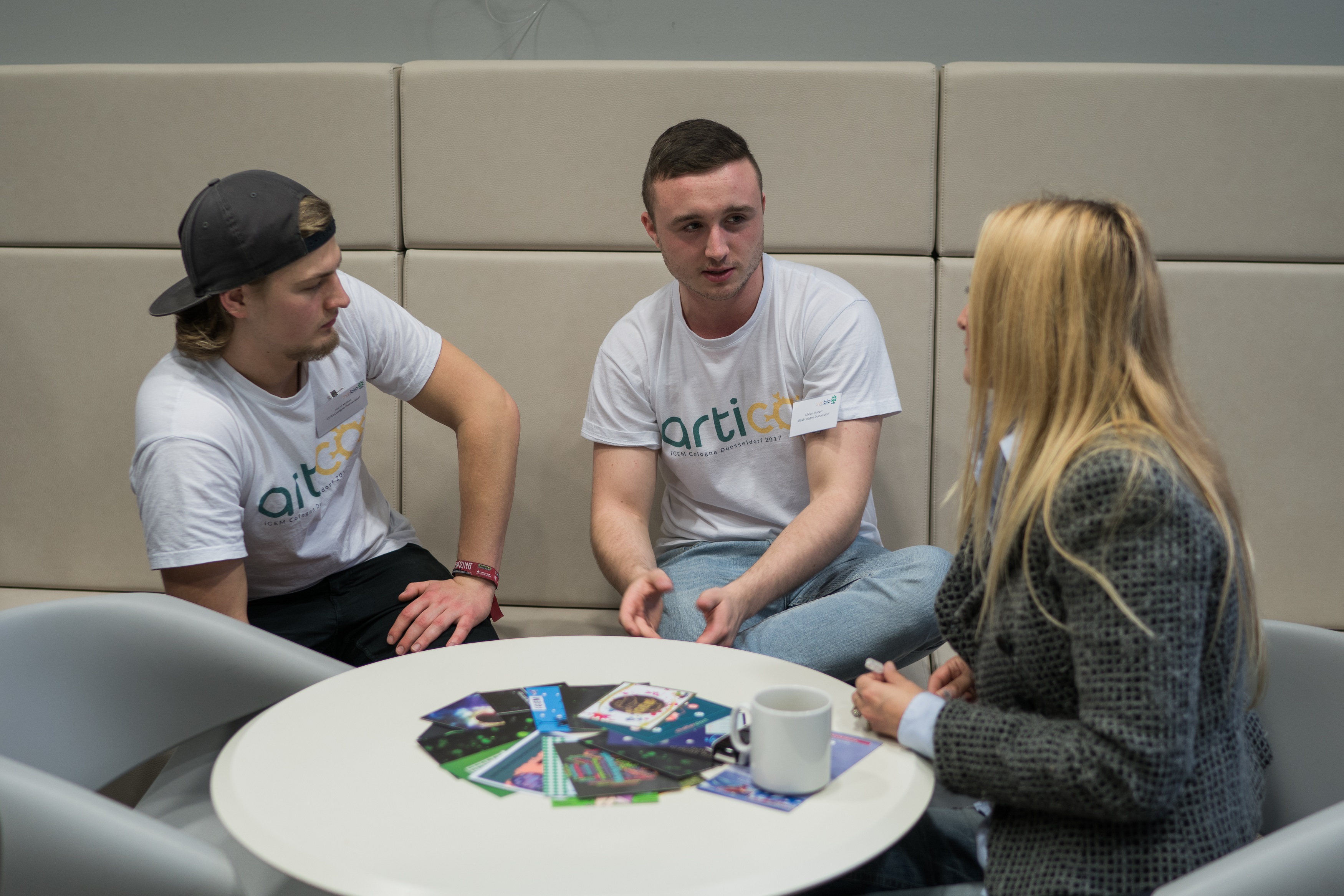 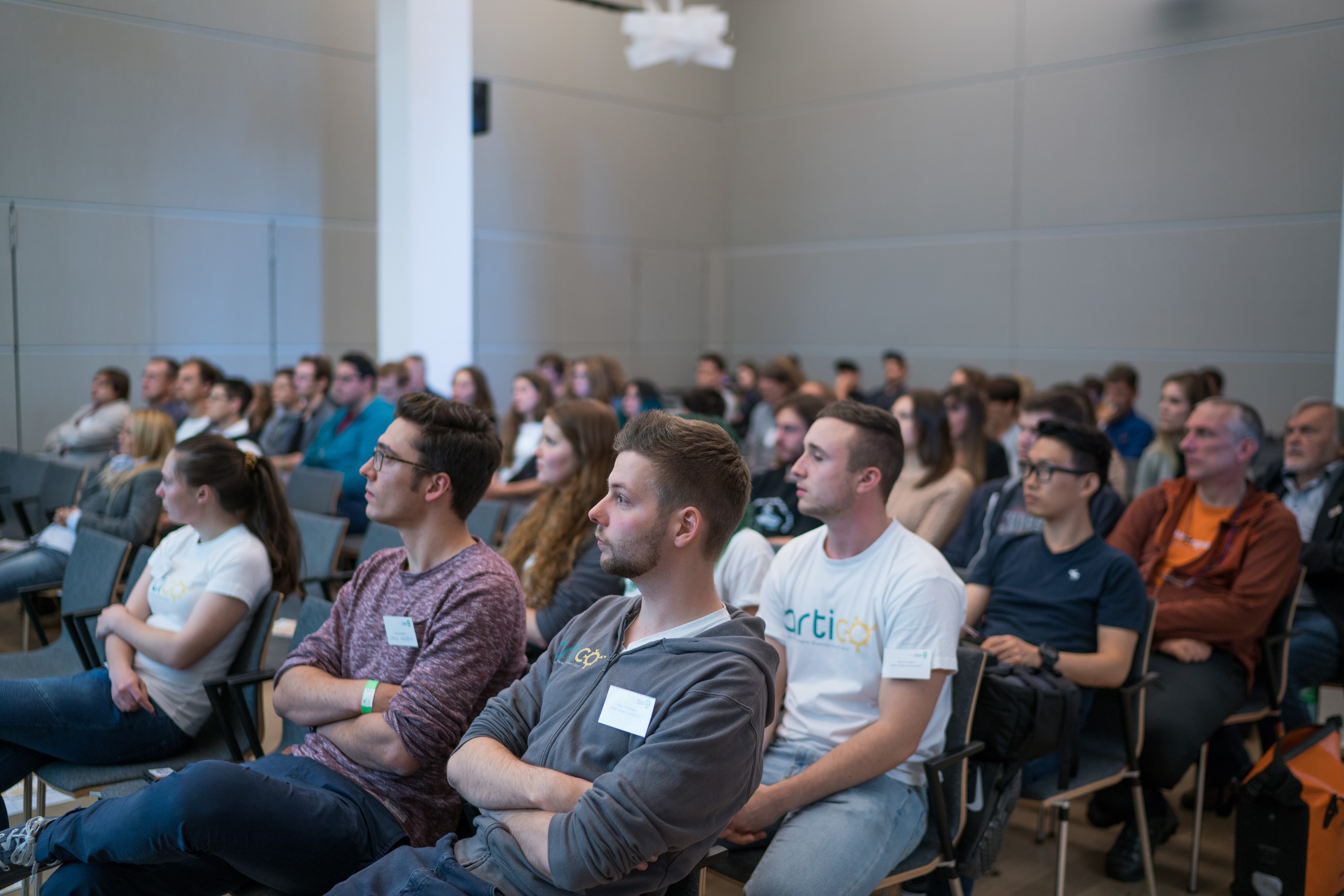 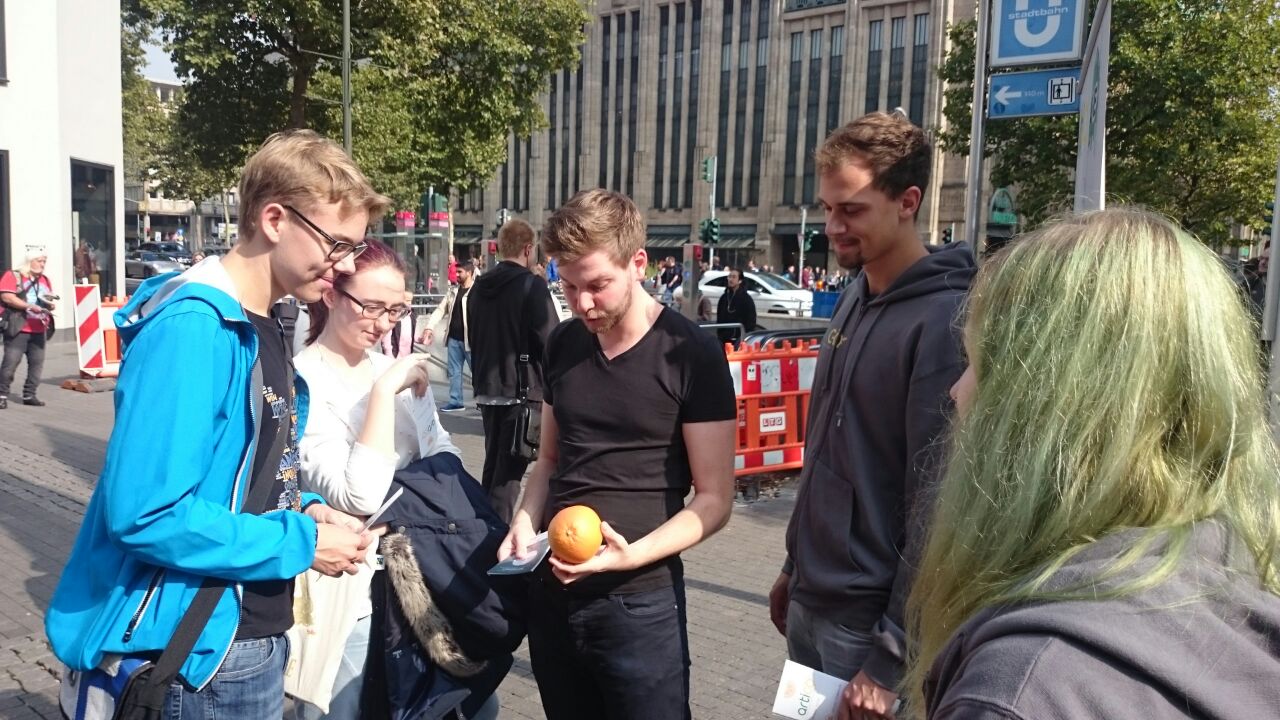 To spread the idea of iGEM and inform the public about synthetic biology in general we decided to set up an information desk on a public place in the downtown of Duesseldorf on September 23rd.
To get the attention of the people we created a little quiz in which they had to figure out what grapefruits, yeast and insect repellent had in common. Many people stepped by because they had no clue. We were happy to elaborate on the link between them and and our idea of fighting malaria.
We recognized on the given day, that a large percentage of the population is not at all informed or misinformed about synthetic biology which leads to a lot of unfounded fear. We had serious and intense talks with people who had negative feelings towards synthetic biology but could not exactly name why. We described the safety regulations and ethical aspects to them in detail and were often able to take away the undefined fear of bio-weapons and other things.
On the other hand people wanted to know how exactly our iGEM project works and elucidated us on what they know about synthetic biology and genetically engineered plants.
Whether knowing synbio or not the people started to be excited about its potential. We invited everyone to our “SynBio Day” to improve and consolidate their knowledge. They strongly appreciated our concept of comprehensive knowledge transfer.

The day was a huge success as we could talk to many people of all ages and education levels and show them what possibilities synthetic biology holds. We were able to inform people with no background information at all, overcome prejudices against synthetic biology and discuss our project with interested people. This project was a first important step to educate the population and create an open and friendly minded environment for synthetic biology. 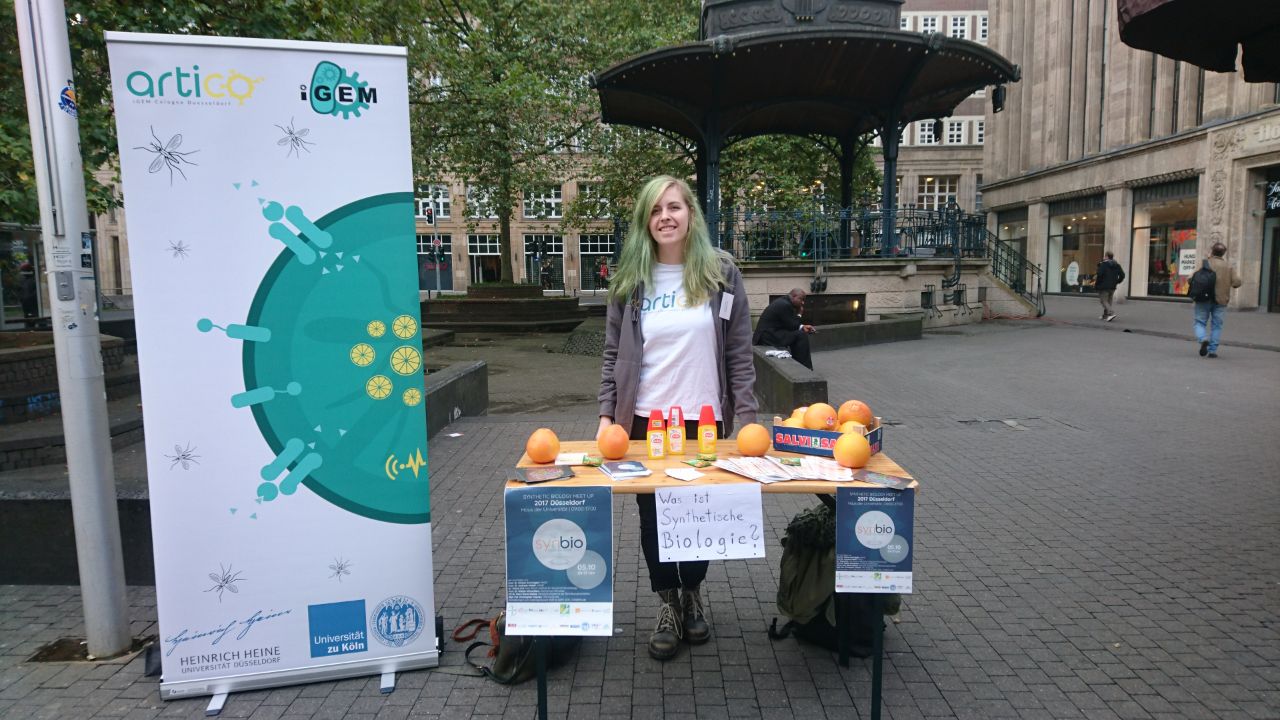 Being a scientist can be difficult these days. In our era, fake news, populism and pseudo sciences are found in all parts of society and social life, steadily diluting teachings about the true scientific method. Often, trust in rabble-rousers is higher than trust in medical doctors and evidence-based science. While some people are working hard towards finding solutions to deal with major threats to nature, certain governments are cutting funding for climate research and conservation of wildlife reserves [Guardian, Nature]. In some countries, people are waiting in line to get vaccinated against deadly diseases, while in others, "highly educated" parents risk the lives of their children by listening to fear mongers. Measle outbreaks thanks to holes in herd immunity threaten immunosuppressive patients even in rich countries [CDC, RKI (German), RKI (German)]. The decadent behavior of western civilizations is obvious: on the one hand they deny the positive impact of genetically engineered plants to developmental countries, dooming people to death by starvation and malnutrition [Al-Babili (2005), De Steur (2017)] . On the other hand they profit from genetically engineered organisms producing insulin and many other useful compounds [Bomgardner (2012), Goeddel (1979), Howard (2013)]. The two-faced nature of this is very disquieting.

Therefore it is our duty as scientists to work towards a more enlightened world. The international "March For Science" initiative is a wonderful way to shed light on these matters. On April 22nd, people all over the world took to the streets in protest against fake news, populism and pseudo sciences. Of course, our iGEM team wanted to be part of this movement. We also invited all other teams in North Rhine Westphalia: Aachen, Bielefeld-CeBiTec and UBonn_HBRS. In our opinion the best way to deal with misinformation about science is to show that science is not witchcraft but rather an open field of study clearly evident for everyone who is interested to (further) educate oneself. We want to talk to people about their fears and concerns rather than letting them alone with their questions. The march for science was a great opportunity to combine showing solidarity of the scientific community with socializing.

On a rainy Saturday morning, our team met at Duesseldorf main station. We had some empty signs and lots of pencils. To brighten up the gray day we drew some colorful signs, quoting the famous scientist Rick Sanchez or other scientific phrases. In Bonn we met up with the iGem teams from Aachen, Bielefeld-CeBiTec and UBonn_HBRS.

Arriving on time gave us an opportunity to get some refreshments and talk to the other teams about iGEM-related topics before the beginning of the ceremony. Unfortunately there was no actual “March” for Science in Bonn but rather a “Stand” for Science. On the other hand this offered the possibility for several speakers to give talks on science, freedom of thinking and researching, and education. At least 850 fellow scientists showed for the cause of facts and evidence-based research [Sciencemag]. After standing in the rain for a good cause, we - roughly 30 people - invaded a pizza-place for a little snack sharing one chair with two people helped breaking the ice. Lots of pizza makes for a sore throat so next we headed for a bar. Among playing charades and engaging in thought-provoking political discussions, we had a great time socializing with the other teams. Alas, all good days eventually come to an end. 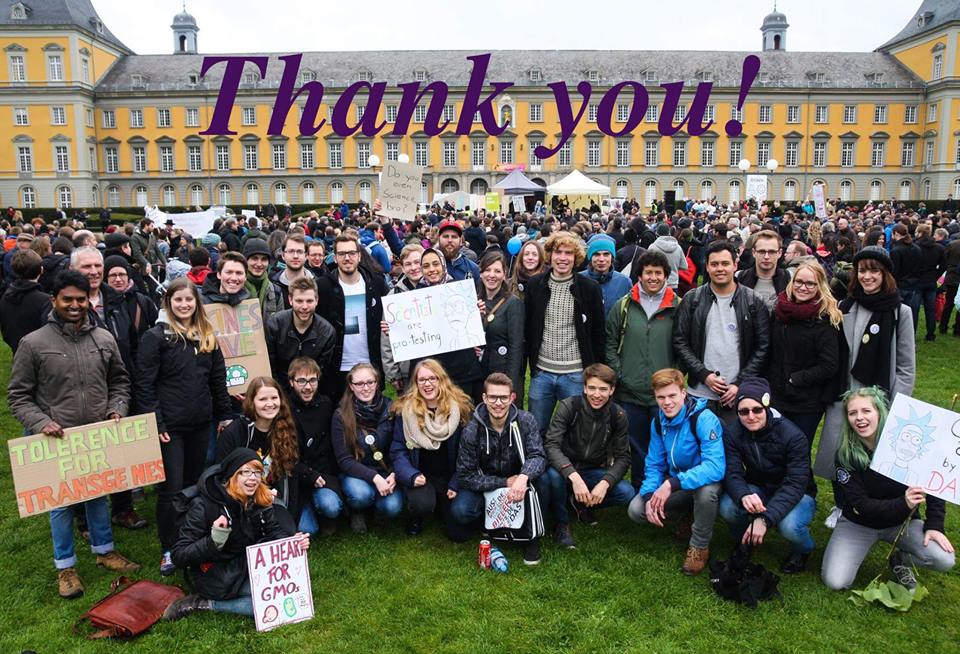 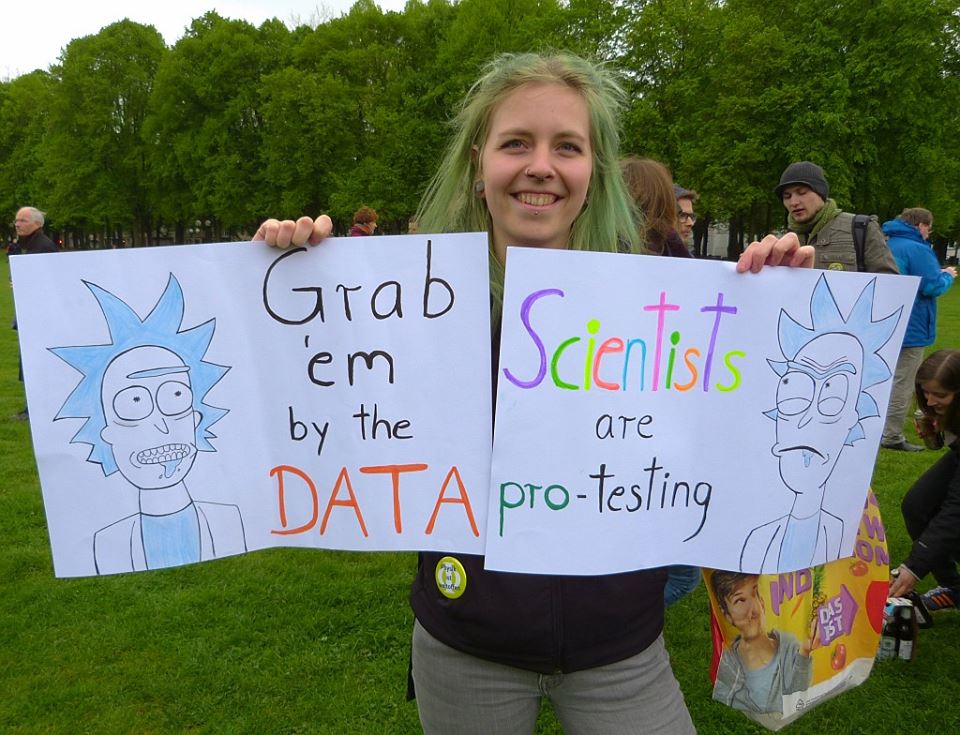 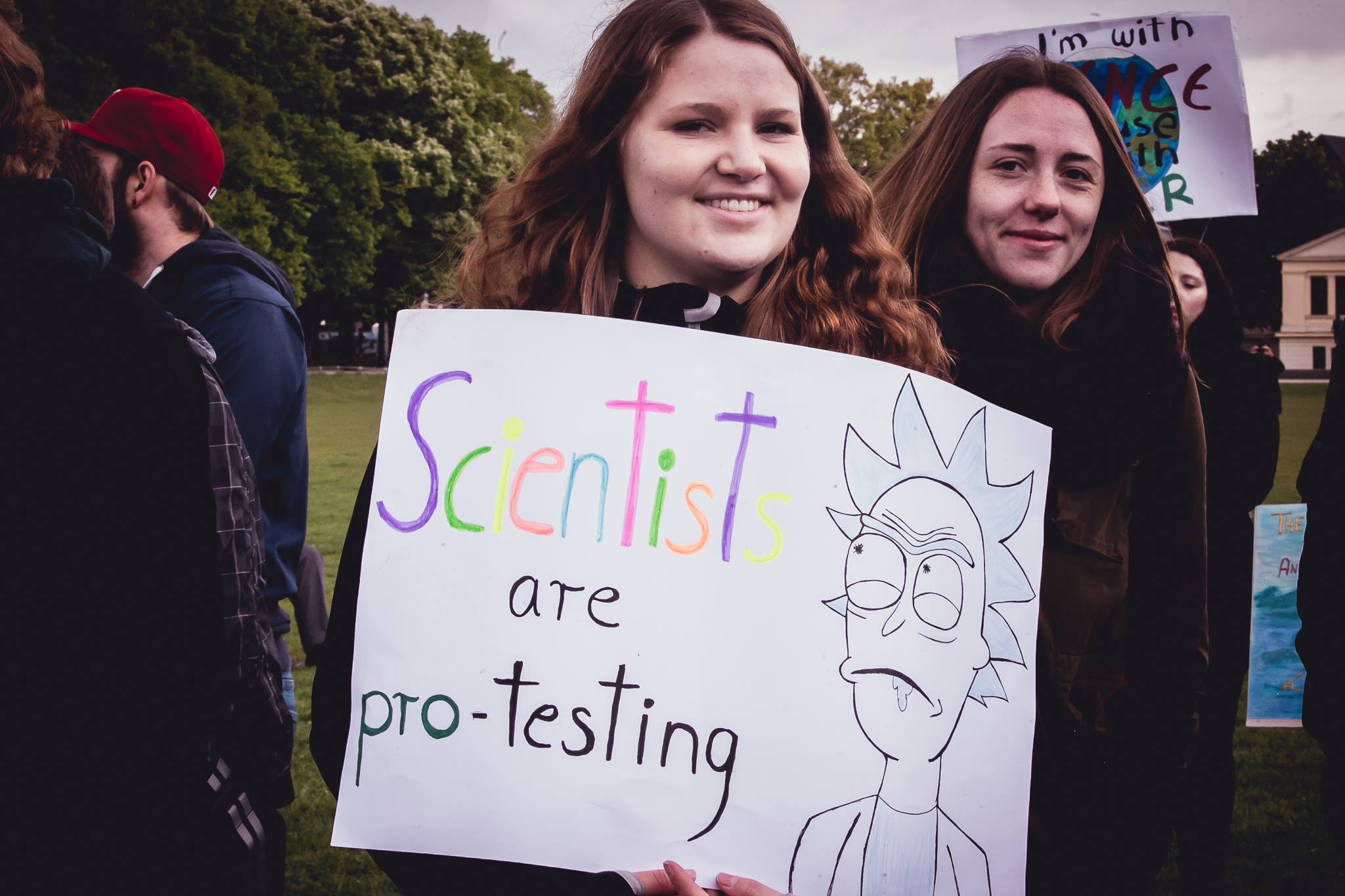 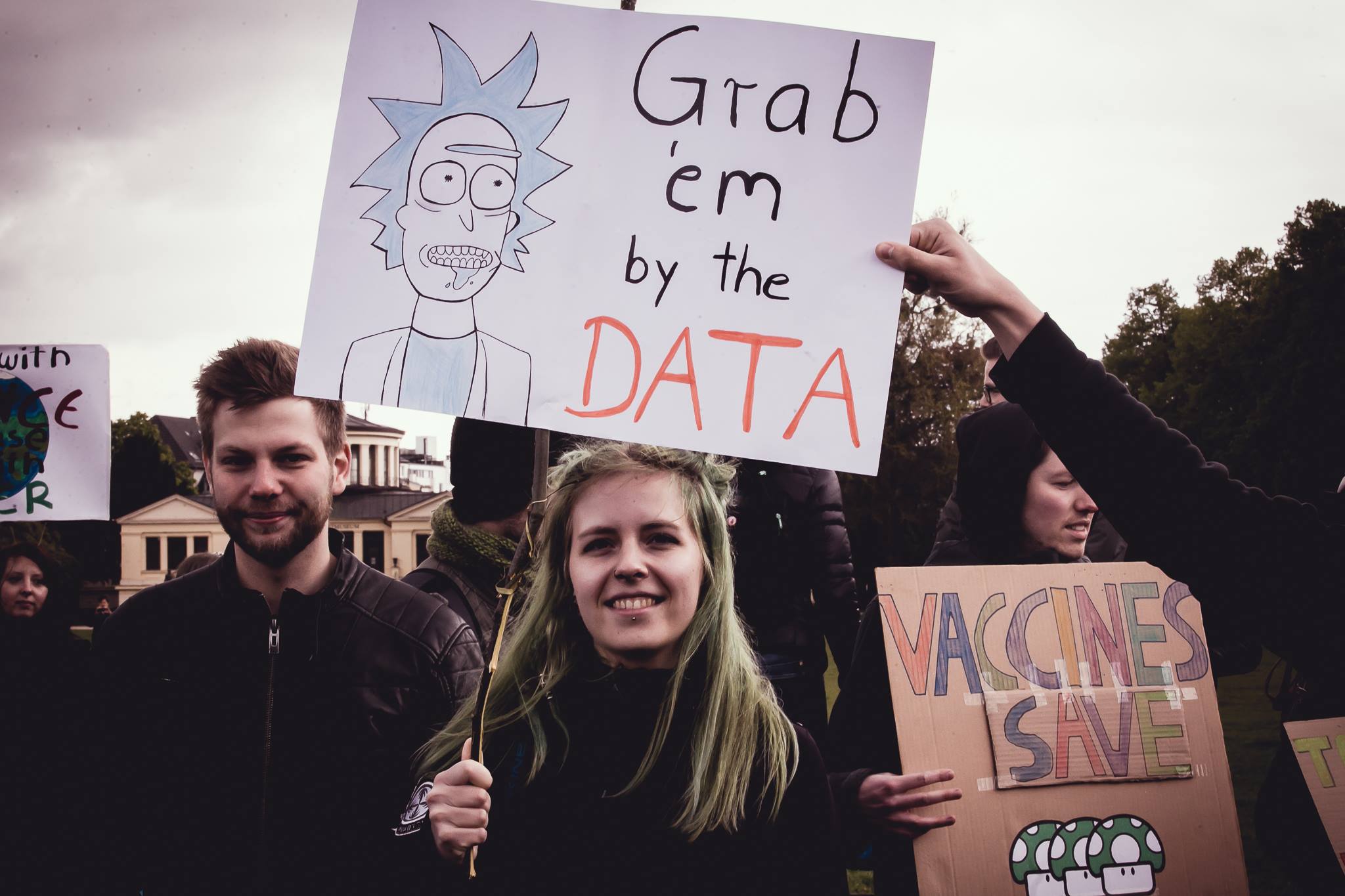 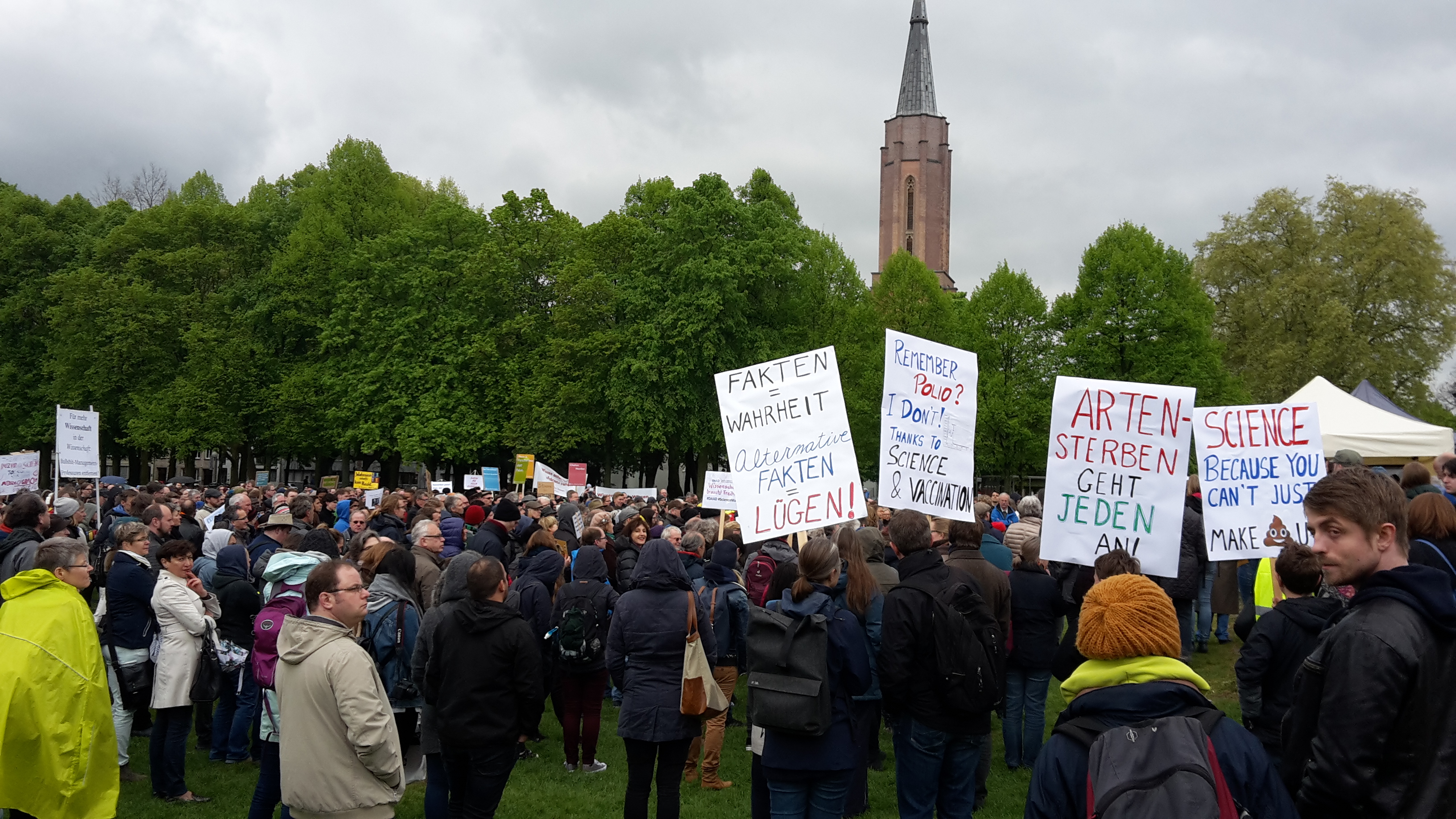 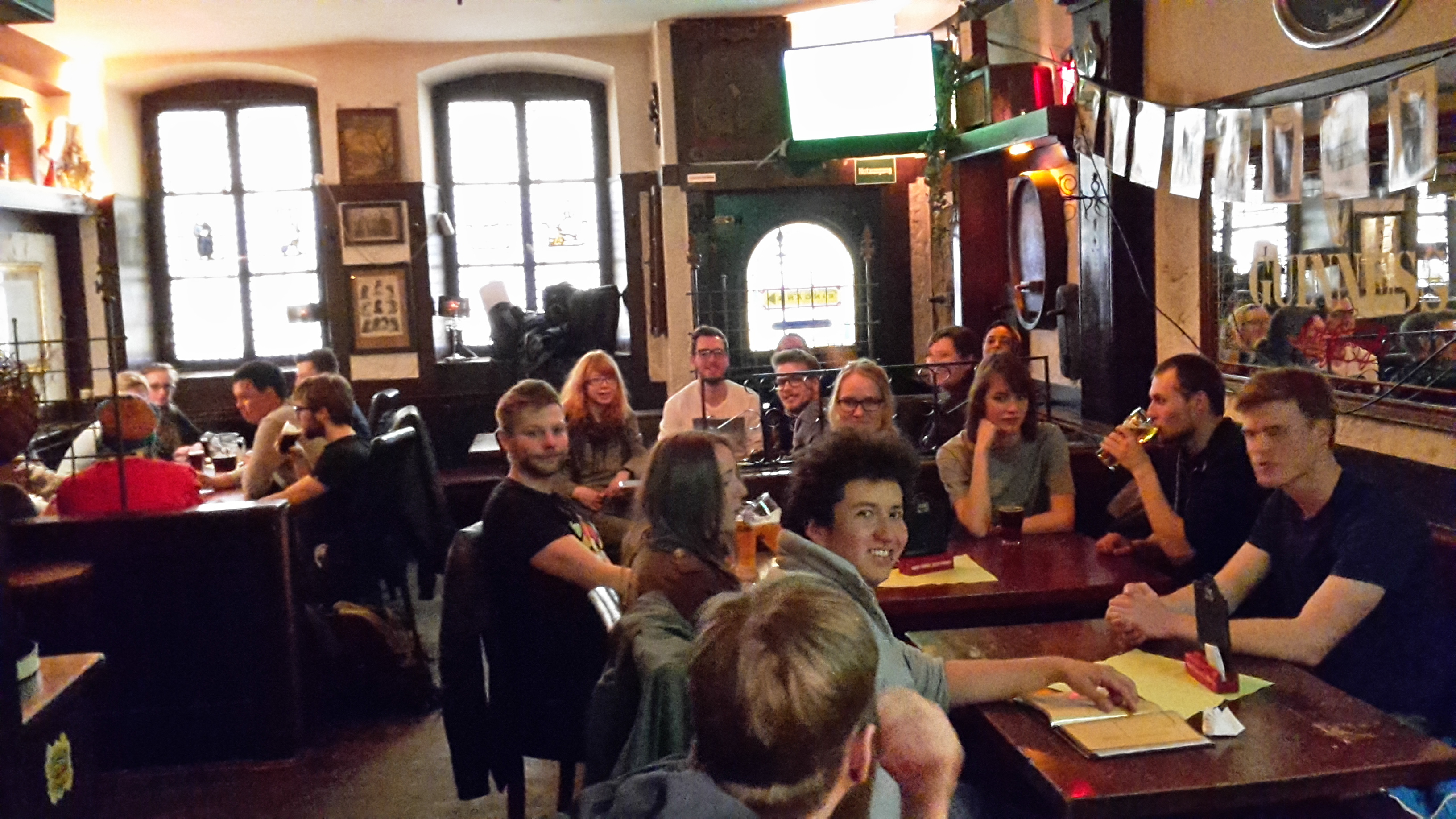 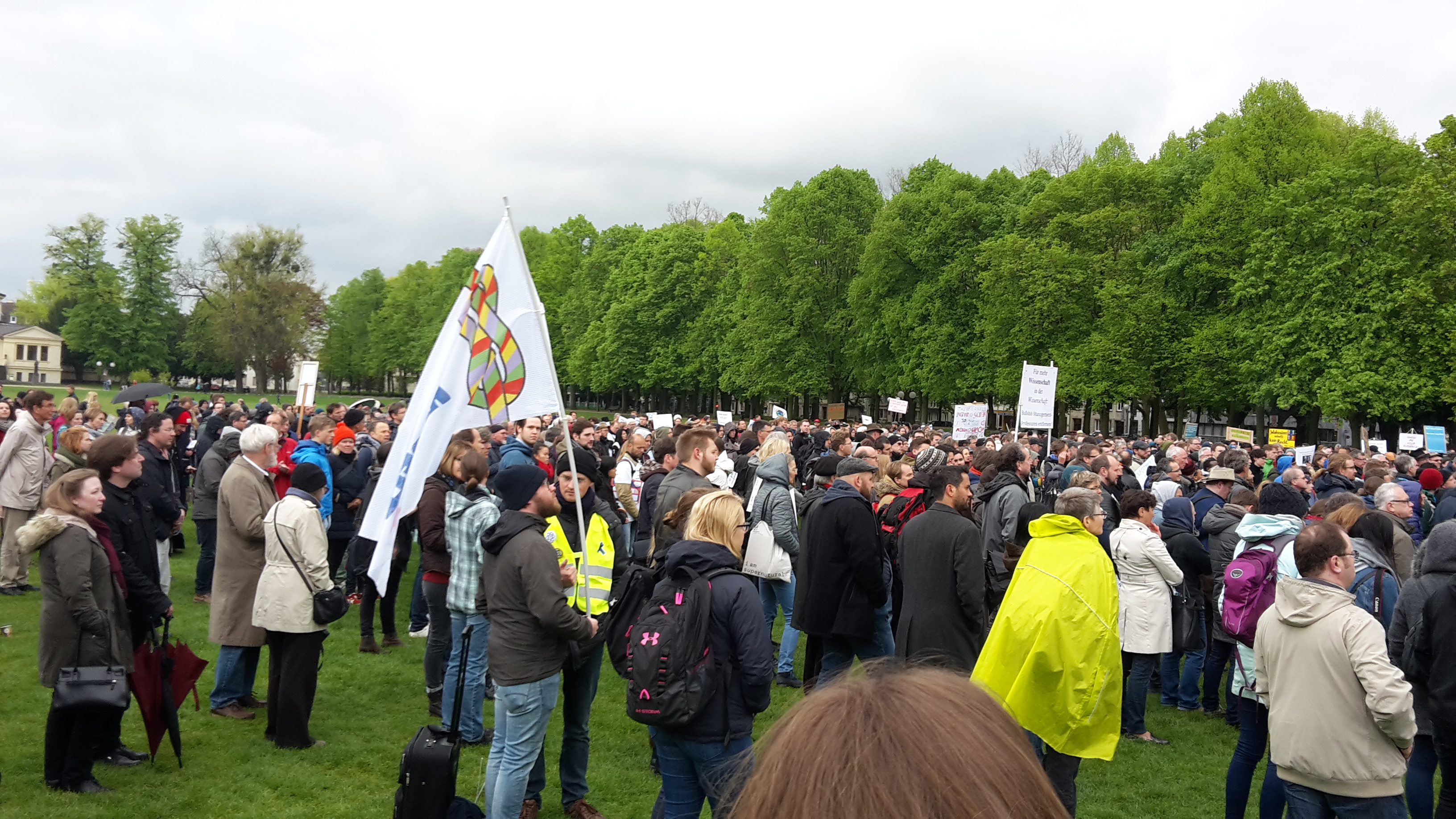