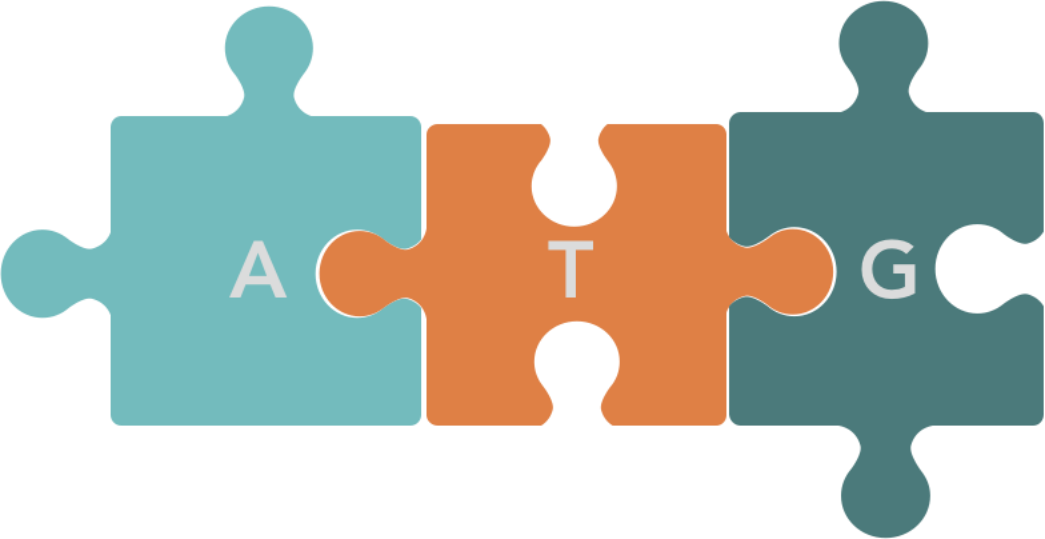 Each year, every team competing in the iGEM competition contributes to the iGEM Parts Registry. This growing collection of genetic parts can be mixed and matched to build synthetic biology devices and systems. During our project, we worked with tens of constructs and chose the two most interesting (and promising) genes to turn into BioBricks. We have designed two versatile Basic Parts that have the potential to be used beyond the scope of our project.

There is increasing interest from researchers and companies in the potential of cyanobacteria as green cell-factories to produce valuable compounds and contribute to a so called ‘biobased economy’. Such photosynthetic cell-factories are capable of producing directly from CO 2 using the energy of (sun)light. However, it is only the compound that is excreted from the cells that is readily available in a downstream process of a “real-world” scenario. Furthermore, if the compound is accumulated intracellularly, it may prove to inhibit its own production, and potentially even growth. Therefore, in order to anticipate product secretion from the cells, it is important to ensure that an effective transport system is available, and hence, the latter becomes an important engineering target in cell factories.
In our project, we engineered the cyanobacterium Synechocystis PCC6803 ( Synechocystis hereafter) to directly use the pollutant CO 2 as a resource for synthesizing fumarate - a versatile chemical traditionally manufactured from petroleum. Among other approaches, we aimed to increase fumarate yields through engineering an effective transport system. We expressed in Synechocystis the transporter leading to the highest fumarate yield increase in E. Coli (identified by Zhang et al.) [1]. This is a C 4 -dicarboxylate carrier, DcuC, with efflux as a major function (hereafter DcuC-ec) [2]. Bearing in mind that transporters are often not expressed or not correctly folded in a non-native host [1], we decided to also include a transporter from an organism that is more closely phylogenetically related. N.Spumigena , also a cyanobacterium, encodes a putative transporter (hereafter termed DcuC-NS), which is similar to the one used in the Zhang study [3].
DcuC is a family of transporters present only in (facultative) anaerobic bacteria capable of fumarate respiration. DcuC is able to catalyze the antiport uptake and efflux of C 4 -dicarboxylates (e.g. succinate, fumarate, malate) and C 4 -dicarboxylic amino acids (e.g. aspartate), but the K d values for the various substrates may differ [2]. It is only expressed under anaerobic growth conditions and has efflux as a major function. In the neutral pH range (pH 6-9) divalent C 4 -dicarboxylates (e.g. fumarate 2- ) are the substrates and can leave the cell in counter exchange with succinate (eq. 1) or through electrogenic symport (eq. 2).

DcuC-ec (Bba_K2385001) and DcuC-NS (Bba_K2385000) are versatile BioBricks that have the potential to increase the yields of any organic acid producing cell factory. Standard biological parts (like these) and molecular biology tools have been developed for widely studied organisms as E. Coli . These parts can also be used in other organisms, but characterization of parts in a non-native host, reveals differences in performance. This emphasizes the importance of detailed part-characterization for a specific biological chassis. Good characterization and documentation opens up the possibility of enhancing the productivity of traditional (algal) compounds and producing new ones through metabolic engineering, bringing us one step closer to a biobased economy.

Integrating DcuC-ec and DcuC-NS into the genome of Synechocystis
The BioBricks were gene synthesized using the sequence from NCBI (NC_000913.3 and AHJ29173.1). Each of the genes was integratedinto the genome of Synechocystis , using a method that is described elsewhere [4]. For the integrative expression, we cloned the gene into an integrative expression vector downstream of a native psbA2 promotor.
Synechocystis can take up foreign DNA spontaneously and integrate it into the genomic DNA by homologous recombination. However, it is a polyploid, each cell containing 4 to 20 copies of the genome [5]. To introduce genes into the genome, full segregation should preferentially be established. For the transformation to Synechocystis , cells were collected from liquid culture. After being washed twice with fresh BG11 medium by centrifuging at 5,000 rpm for 5 min, cells were further concentrated to a total liquid volume of 200 µl. The plasmid containing homologous regions of the psbA2 promotor and DcuC-ec or DcuC-NS downstream was added and mixed with cells to a final concentration of 10 μg mL-1, and subsequently the mixture was illuminated under moderate light for 4 to 6 hours. The mixture was then spread on a commercial membrane (Pall Corporation) resting on the BG11 plate. After further illumination for 16~24 hours, the membrane with the mixture was transferred to another BG11 plate with kanamycin (50 ug/ml). After about one week, colonies were picked and scratched sequentially on a new BG11 plate with kanamycin. Colonies were picked for PCR confirmation (with 35 cycles). Further segregation was done in the liquid culture. After another 2 weeks, the strain was fully segregated. (fig. 8.1).

Figure 8.1 PCR confirmation of gene expressions on Wild Type background of DcuC-NS and DcuC-es. A clean expression gives a single DNA band around 3.120 bp, while for wild type (WT) this is approximately 312 bp.

Studying the effect of heterologous gene expression on fumarate production
We cultivate the newly designed strain in a Multi-Cultivator (MC1000-OD, PSI, Czech Republic), with light intensity controlled through a “cool-white” LED panel (PSI, CZ). BG11 is the standard medium used, together with 10 mM TES-NaOH (pH = 8.0) cultivated at 30 ºC and bubbled a mix (v/v) of 99 % air and 1% CO 2 at a flow rate of ~150 ml min-1 and the working volume was 60 ml. Inoculation was done such that the initial OD 720 was roughly 0.05. Continuous light was given at fixed light intensity of 20 µmol photons m-2 s-1 after inoculation, and then switched to 120 µmol photons m-2 s-1 after 24 hours.
Cell culture samples were harvested at selected time points for OD and fumarate analysis. 1 ml of sample was centrifuged at 15.000 rpm for 10 min. Then 500 µl supernatant was taken and filtered (Sartorius Stedin Biotech, minisart SRP 4, 0.22 µm) for sample preparation. Fumarate concentration was measured by HPLC-UV/VIS (LC-20AT, Prominence, Shimadzu), with ion exclusion Rezex ROA-Organic Acid column (250x4.6 mm; Phenomenex) and UV detector (SPD-20A, Prominence, Shimadzu) at 210 nm wavelength. 10 µL of the HPLC samples were injected through an autosampler (SIL-20AC, Prominence, Shimadzu), with 5 mM H2SO4 as eluent at a flow rate of 0.15 ml min-1 and column temperature of 45 ºC.

We study the effect on fumarate efflux by cultivating the expression strain (DcuC-NS, n=3) with ΔfumC as a control (n=2, ΔfumC is a derivative of Synechocystis that produces fumarate). The strains are cultivated for 150 hours, while monitoring cell growth and fumarate production. Wild type Synechocystis produces fumarate as a part of the intracellular metabolome, but does not secrete it. Therefore, we hypothesize that, provided the intracellular concentration is sufficiently high (>K s ), we should see fumarate production in DcuC-NS strain.

However, after 150 hours, no extracellular fumarate is being produced by the DcuC-NS or DcuC-ec expression strains (fig. 8.2A). The ΔfumC is used as a control for fumarate production and produces roughly 1 mM of fumarate after 150 hours. This indicates that under these conditions heterologous expression of DcuC-NS alone is not sufficient for fumarate to be secreted above our detection limit (~0.05 mM). To our surprise, we measure extracellular lactate being produced by DcuC-NS with a maximum of 5 mM (fig. 8.2B). Lactate often indicates that there is a contaminant, but extensive contamination checks did not show contamination of any kind. 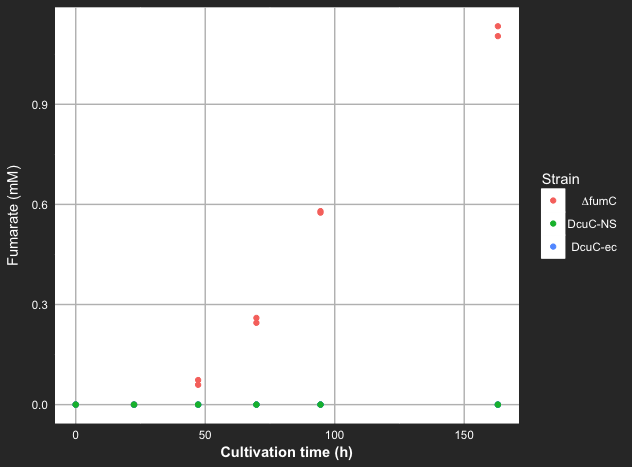 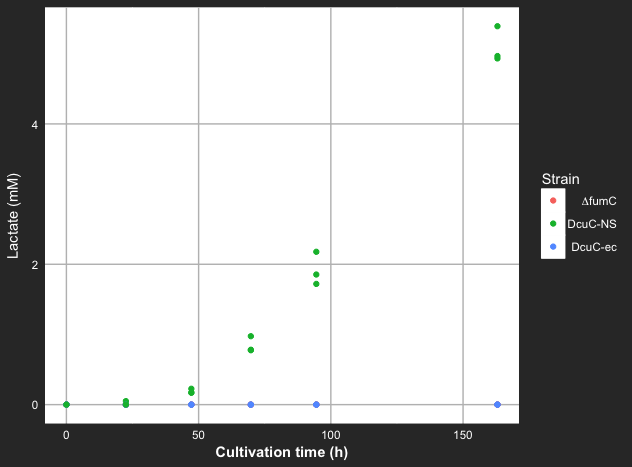 Figure 2.2 Extracellular fumarate (A) and lactate (B) production in different Synechocystis strains under constant light illumination for over 150 hours. (n=3 for expression strains, n=2 for ΔfumC).

We were able to integrate the heterologous transporters DcuC-ec and DcuC-NS into the genome of Synechocystis . When cultivating for 150 hours, no extracellular fumarate was produced by the DcuC-ec or DcuC-NS expression strain. DcuC-NS is a putative C 4 -dicarboxylate transporter, but yet no experimental evidence can support this. Therefore, more extensive experiment have to be done on this transporter to confirm its function. A next step would be to express DcuC-ec and DcuC-NS on the ΔfumC background that is already producing fumarate to see if this could further boost fumarate production. This will test simultaneously whether intracellular fumarate was the limiting factor in the experiment described above; and whether it is inhibiting its own production, and potentially even growth, in the strain with the ΔfumC genotype.