Although bacteria can naturally synthesize GABA, we wanted to increase expression of the gadB gene and subsequently GABA production in order to give our intended probiotic, Lactobacillus plantarum, a more potent medicinal quality, with the idea that this GABA-overproducing probiotic can then be consumed by patients with bowel disorders, hypertension or anxiety (1). Overexpression of the gadB gene will be accomplished by placing it under the control of either the P8 or P32 constitutive promoters from Lactococcus lactis (2).

To make our GABA-producing probiotic, we ultimately needed to assemble a GABA overexpression cassette plasmid. The intention is that bacteria containing this GABA overexpression cassette plasmid should produce high levels of GABA. In order to assemble this plasmid, we decided to utilize the Golden Gate Assembly method. In short, Golden Gate Assembly is a relatively new cloning method that allows for the creation of a multi-part DNA assembly (i.e. cassette plasmid) in a single reaction through the use of DNA parts containing specific, predefined suffixes and prefixes with recognition sites for Type IIs restriction enzymes (e.g. BsmBI and BsaI). The specificity of these suffixes and prefixes provides directionality of the desired DNA parts during the assembly process. For our purposes, we used the MoClo Yeast Tool Kit developed by John Dueber (3).


Click on one of the images below to learn more about our results! 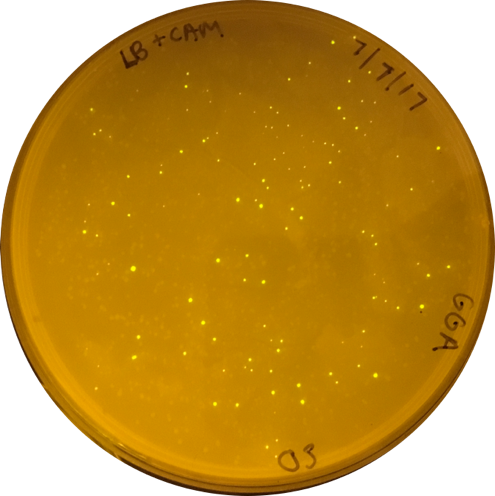 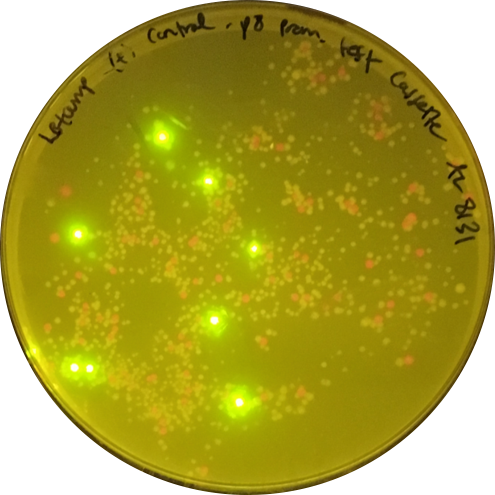 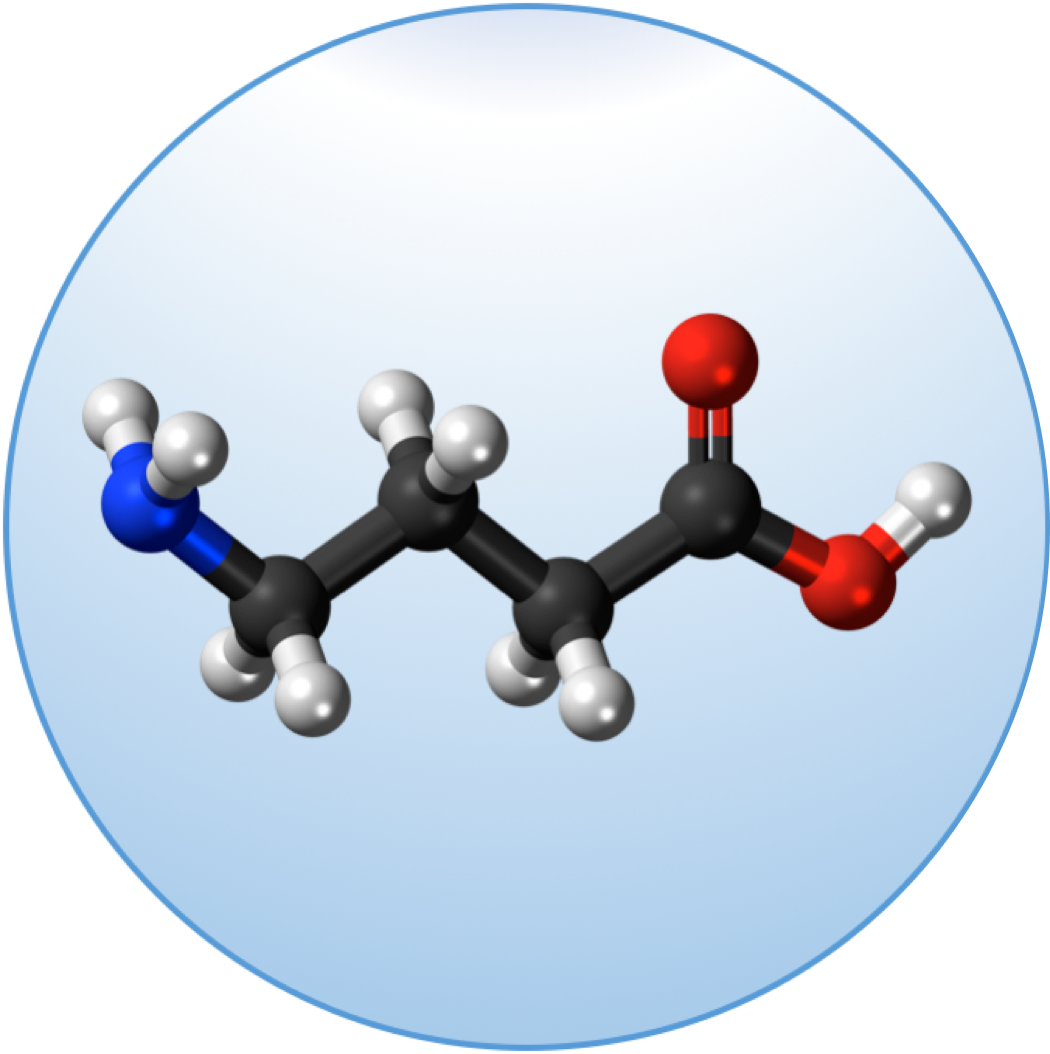 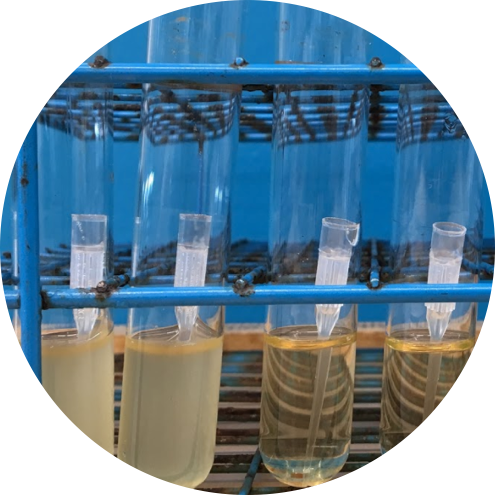 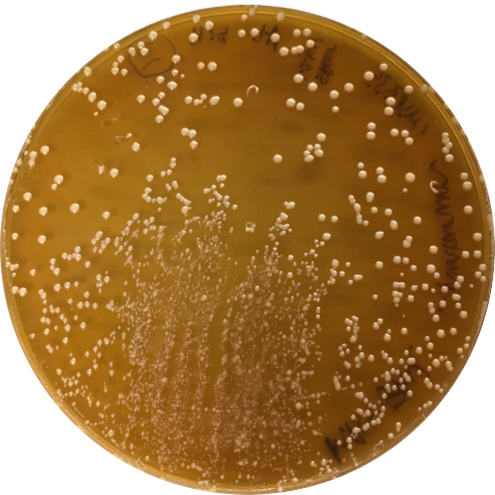 
Additionally, the BsmBI sites and overhangs in pYTK001 are flanking a gfp reporter gene. During the part assembly process, our DNA sequences of interest replaced this gfp reporter gene. This provided a phenotypic screen that allowed us to visually see which transformant colonies were negative and potentially positive. Under UV illumination, positive colonies containing our intended part plasmid assembly did not exhibit fluorescence under the UV illumination, while negative colonies did (Fig. 2). The non-fluorescent colonies on the part plasmid transformation plates were miniprepped and subsequently sequence verified. Other part plasmids used in subsequent cassette assemblies were directly obtained from UT's Golden Gate Part Repository.

After successfully creating the gadB gene and P8/P32 promoter part plasmids, the functionality of these part plasmids were then assessed by assembling them into cassette plasmids.


Although the functionality of the Lactococcal lactis P8 and P32 constitutive promoters has been well characterized in Gram-positive bacteria such as Lactobacillus, we wanted to test if these promoters could function well within E. coli. To do this, we created test cassette plasmids containing the E2-Crimson reporter gene (which encodes a red fluorescent protein) inserted downstream of either the P8 or P32 promoters using BsaI Golden Gate assembly. To create these test cassettes, we used the P8/P32 promoter part plasmids, the E2-Crimson part plasmid, an M13 terminator part plasmid, connector part plasmids, and the pYTK095 vector as the backbone (Fig. 3). If the P8 and P32 promoters are functional in E. coli, we expected to observe red fluorescence in colonies transformed with our test cassette plasmids. 
Upon first look, E. coli colonies transformed with these assemblies appeared purple-blue in color. This phenotype was due to the expression of the red fluorescent protein. Further, we noticed that E. coli colonies transformed with these assemblies fluoresced red under UV light, indicating that the P8 and P32 promoters are indeed expressing the E2-Crimson reporter gene and thus are functional in E. coli (Fig. 4). Similar to the pYTK001 entry vector in part assembly, the pYTK095 backbone used for cassette assembly contained a gfp reporter gene that is replaced by sequences of interest. This allowed us to easily perform a phenotypic screen for positive colonies. Non-fluorescent colonies may potentially have had the correct cassette assembly, while fluorescent colonies did not (Fig. 6).

The non-fluorescent colonies were then screened using colony PCR, and positive colonies were then miniprepped and sequenced. The sequencing results indicated that there were several mutations within the gadB gene in the samples. These mutations are recorded in Table 1.


Along with being one of the canonical amino acids utilized in protein synthesis, glutamate plays an important role as the main amino-group donor in the biosynthesis of nitrogen-containing compounds such as amino acids and nucleotides (4, 5). Thus, we hypothesized that gadB overexpression via the P8 and P32 constitutive promoters and the high-copy-number ColE1 origin induced a high metabolic load on the cells by shunting away glutamate from essential anabolic pathways. Additionally, having high gadB expression does not confer a selective advantage to the cells. We believed that transformants containing the mutationally inactivated gadB gene were favored in the population, as "breaking" the metabolically-taxing gadB gene gave these transformants a competitive advantage, allowing them to utilize glutamate sources towards growth. In contrast, transformants containing the functional gadB gene were selected against due to having a depletion of glutamate needed for important cellular processes.


To troubleshoot this problem, we decided to use a backbone containing the low-copy number p15A origin for the cassette assembly (Fig. 7). Copy number reduction of our gadB overexpression cassette plasmids (accomplished by replacing the ColE1 origin with the p15A origin) was expected to decrease the overall amount of gadB expression, thereby decreasing the metabolic load imposed on the cells and the mutation rates observed in the gadB gene. However, we also observed several mutations within the gadB gene in the potentially positive cassette plasmids sequenced. The observed mutations are detailed in Table 2.


Given our experimental results and the fact that inducibly expressed genetic devices are more evolutionarily stable than constitutively expressed ones (6), we attempted to inducibly express the gadB gene using the regulatory elements of the lac operon to see if expression and maintenance of a stable gadB gene was possible in E. coli. Our IPTG-inducible gadB expression cassette plasmid was assembled using a lac promoter and operator part plasmid, the gadB gene part plasmid, the M13 terminator part plasmid, connector part plasmids, a CP25 promoter part plasmid, a lacI part plasmid, and the SpecR and p15A origin part plasmid (Fig. 8). Under this assembled regulatory system, in the absence of IPTG (an analog of the allolactose inducer) the LacI repressor will bind to the lac operator region to block transcription of the gadB gene. When present, IPTG will act as an inducer and bind to the LacI repressor to decrease its binding affinity for the lac operator, thereby allowing for gadB expression. This IPTG-inducible system provides us with a mechanism of controlling gadB expression. Positive colonies have been identified and sequence verification is currently underway.

We wanted to assemble our final GABA overexpression cassette plasmid using the shuttle vector pMSP3535 as the backbone (Fig. 9). To do this, we first needed to make pMSP3535 Golden Gate compatible (i.e. free of BsaI restriction sites and containing correct overhangs for cassette assembly). We chose to work with pMSP3535 as it contains both a ColE1 origin for replication in E. coli and a pAMb1 origin for replication in Gram-positive bacteria including Lactobacillus species (7), allowing us to easily transplant our cassette plasmid from E. coli to Lactobacillus plantarum once assembled. Additionally, the pMSP3535 vector contains the resistance gene for erythromycin, of which Lactobacillus plantarum is naturally susceptible (8). Figure 10. Assembly workflow for creating the Golden Gate compatible pMSP3535 backbone. The first step involves replacing the ColE1 origin in the pMSP3535 backbone with a new ColE1 origin from pYTK001 to create a pMSP3535 + ColE1 assembly. The second step involves combining the pMSP3535 + ColE1 assembly with a gfp dropout to form the final Golden Gate compatible vector to be used to create our GABA overexpression plasmid. 
To this pMSP3535 + ColE1 assembly, we wanted to add a gfp dropout part containing internal BsaI sites that will generate overhangs compatible with those in the P8/P32 promoter and M13 terminator part plasmids. Additionally, the incorporation of this gfp dropout part will also allow us to visually screen for positive and negative transformants based on their fluorescence. BsmBI sites and compatible overhangs were added to the gfp dropout part by PCR amplifying it from pYTK047. We have been attempting to linearize and add BsmBI sites and overhangs to the positive pMSP3535 + ColE1 assemblies via PCR, with no success. However, results from diagnostic digests suggested that our assemblies may have contained extra, undesired DNA such as IS elements (Fig. 12). Thus, as of right now, we are screening for more positive pMSP3535 + ColE1 transformants. Once we have troubleshot this problem, the pMSP3535 + ColE1 and the gfp dropout PCR products will be joined through BsmBI assembly to form the final Golden Gate compatible pMSP3535 vector. 
Because we are creating our Golden Gate compatible pMSP3535 shuttle vector in E. coli, we wanted to determine the natural susceptibility of E. coli to erythromycin as the minimum concentration to use has not been established clearly in the literature. Thus, we performed an erythromycin minimum inhibitory concentration test in liquid LB media (Fig. 13). After one-day incubation, we observed that E. coli was resistant up to around 150 µg/mL of erythromycin. From this experiment, we have determined that the optimal erythromycin concentration for selecting against E. coli in liquid culture is around 200-250 µg/mL.


In order to grow Lactobacillus plantarum, we used MRS broth in a CO2 incubator without shaking. After characterizing the growth of the bacteria, we aimed to transform it with pMSP3535. We first attempted several protocols, including Landete 2014 (11) and Speer 2012 (12). However, we found success using a variation of the Welker protocol (13). After preparing the necessary solutions, we followed the Welker protocol with some minor differences, including inoculation of bacterial stocks in 10 mL of MRS broth rather than 25mL; utilizing a CO2 incubator without shaking; subculturing cells in 0.9M NaCl rather than glycine, transforming with 100 ng of plasmid DNA instead of the 200 ng that the protocol recommends, and electroporating with a resistance of 3kV and 600Ω. For more information about the protocols including broth recipe and transformation procedure, click here!


Our first plasmid we chose to transform Lactobacillus plantarum with was pMSP3535. This plasmid expresses erythromycin resistance and contains the pAMB1 origin. After cells were electroporated, they recovered overnight in the appropriate recovery media. They were plated on MRS agar plates supplemented with 10 μg/mL erythromycin and left to grow for 2 days. The results of our transformation can be seen in Figure 14.