Public engagement is a term that has recently been used to describe "the involvement of specialists listening to, developing their understanding of, and interacting with, non-specialists".


Now why would that be relevant to a competition regarding Synthetic Biology. The answer to this question is simple, it’s quite clear that iGEM is much more than just science. Given that this competition is of the academic nature, the main focus is science, however, it’s not the only focus.

iGEM really is a true multidisciplinary competition, targeting many real-life aspects. Going back to public engagement, it is one of the disciplines that iGEM is focused on. Within this track, students focus on reaching out to the public, spreading word about their achievements. It is extremely important to work on researching a new disease or optimizing a new technology, but it is even more important to be able to reach out and share this knowledge with the world. Therefore, public engagement is extremely important. This year, we really focused reaching out to the public, spreading the word about our science, synthetic biology, and of course, iGEM! Public Engagement as a concept was achieved through three phases, The European Practice Jamboree, The EOS Blog, and Social Media. First, we reached out to European teams to invite them to Belgium in an attempt to collaborate. We organized the European Practice Jamboree which was a huge success! Second, we reached out to those who already have a knack for science. Through a scientific magazine based in Belgium, EOS, we were able to post weekly blogs about our iGEM journey, where we shared our journey from the start till the last week before the Jamboree! Lastly, we used Social Media to reach out to all those who might be even slightly interested in our project. Using the power of Facebook, Twitter, and Instagram, we were able to reach people that were wouldn’t have been able to in any other way!


Since none of our team members had any experience when it came to extravagant events such as the giant jamboree, we wanted to recreate this atmosphere in Leuven. A presentation in front of hundreds of people sounds rather scary and overwhelming, so what better way to overcome such a feeling than by imitating it? So, to prepare our team and the other teams in the best way possible, we planned to bring as many teams together in Leuven for the European Practice Jamboree. The goal of this meet-up was to practice the presentations so the team members who are presenting in Boston get comfortable presenting to a rather sizable crowd. Of course, we could never reach the same number of attendees as the Giant Jamboree in Boston, but we could tried to bring together as many people as possible. 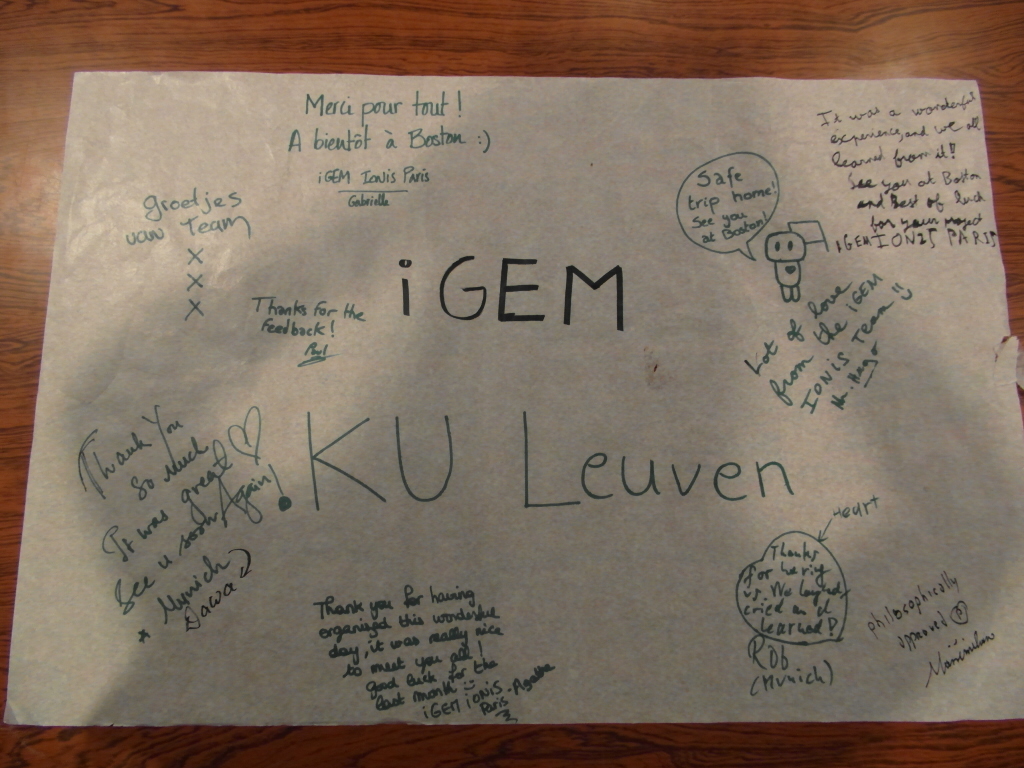 We planned this event from the beginning of our journey, because we were very enthusiastic to meet fellow iGEM participants. First, we went to the Benelux meet-up at Wageningen University, there we had a great time and got to know the Dutch teams. It was really nice to interact with so many young and enthusiastic people, all enrolled in the iGEM competition. The atmosphere there couldn’t be described. This meet-up took place in the beginning of the summer, so the only thing we could present was our project ideas since we weren’t able to start until the summer holidays. 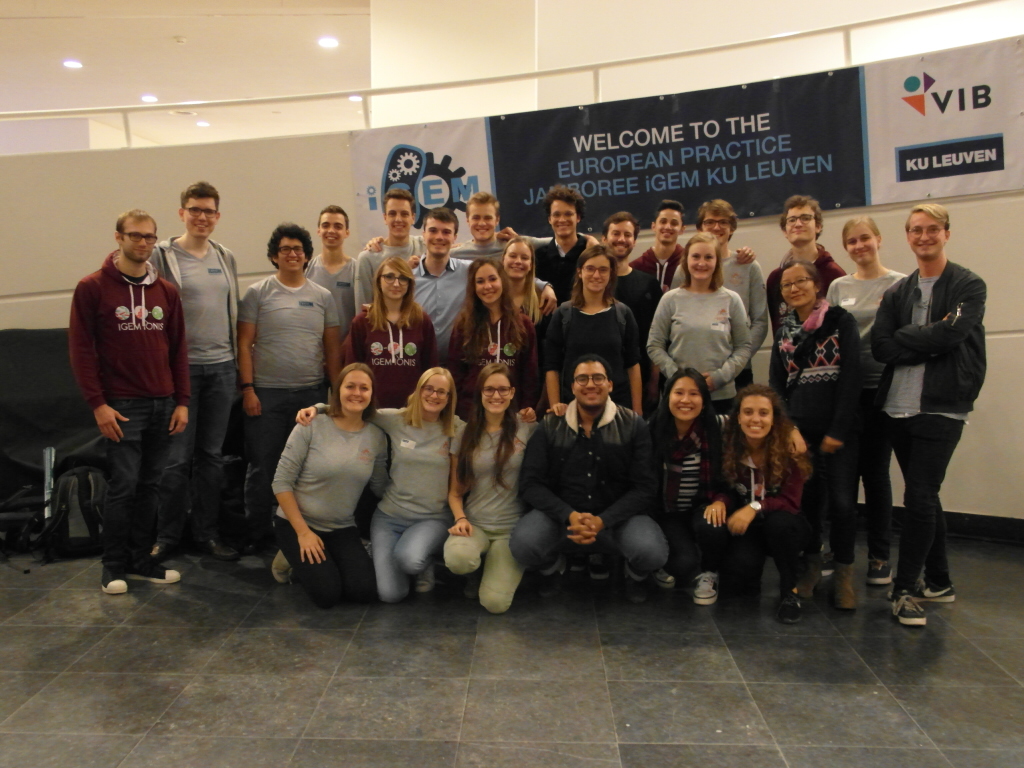 We wanted to take it a step further and waited till the 7th of October to make sure the teams finished or were nearly done with their projects. In that way they could present everything they had done during the summer. We invited all teams located in the European region to the European Practice Jamboree, eventually 4 teams responded and attended this event. Representatives of iGEM team Amsterdam, Ionis Paris, Aachen and Munich attended the event. They had prepared a presentation and a poster, every team had the chance to present their project and get feedback from the crowd. In this way the teams were able to adjust their presentation based on the critique and feedback from the other iGEM teams. In between the presentations we were given to remarkable talks by two keynote speakers (Professor Jos Vander Sloten and Professor Johan Swinnen). The latter, Prof, Swinnen, inspired us all with his life story as researcher. This summer he ran 2400 kilometers from Leuven to Santiago de Compostela, as a tribute to cancer patients all over the world. His story inspired the iGEM teams to go further and push through their limits in this project. Afterwards enjoyed tasteful dinner, were team members socialized and shared their excitement about Boston! Everyone had a great time and got to know their fellow iGEM students a bit better, we all share a common goal and that made it a little easier to break the ice. After dinner the teams presented their poster, everyone could freely move and ask questions when necessary. In this way they were able to change some of the details, so the posters would be perfect for Boston. We finished with a great group picture and a gift for everyone, our heart shaped stress balls as memorabilia to our event.

We would like to thank all the people who were present: Bram, Thijs and Josine from iGEM Amsterdam. Dawa and Robert form iGEM Munich. Svenja, Johanna, Sergio, Michael and Thori from iGEM Aachen. Paul, Nicolas, Gabrielle, Agathe, Antoine, Alicia and Eliott from iGEM Ionis Paris. We had an amazing day with you and can’t wait to meet you in Boston.


Aside from direct contact with kids, adults, patients and experts, we wanted to reach a bigger number of people at once. ‘Eos’ is a well-known scientific magazine designed to bring scientific news and developments to a Dutch-speaking audience with both scientific and non-scientific backgrounds. Naturally, we considered Eos an ideal environment to publish something about our iGEM project, given its broad target group. 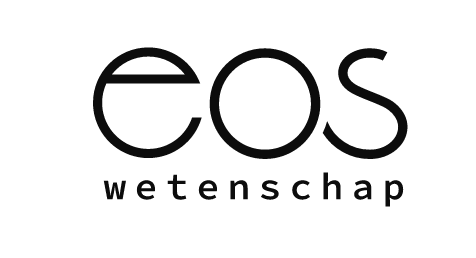 We started by kindly asking Eos to write an article about us. As we expected, they kindly declined. However, they surprisingly offered us a writer’s account on their website, and the opportunity to write one or more articles our self. Without hesitation, we accepted this opportunity thankfully, and started writing.

In total, we wrote four articles about iGEM. In the first one, we described how we got started with iGEM, and how we came up with our HEKcite project. Secondly, we wrote about the ‘dark’ side of science. The part of research where everything goes wrong, and how to deal with that. In our third article, we gave a more loose description of our activities outside the lab (sponsoring, meetings, education projects…). In our fourth and final article, we published a quick overview of our scientific results, and future directions.


According to the staff of Eos, every article reached around 1200 readers one week after publication. Therefore, we can conclude that we successfully brought synthetic biology, iGEM, and HEKcite, to a broad public. And that couldn’t make us more proud.

Nowadays, we live in a highly connected world, everything is now accessible via the click of a button. In such a scenario, one must mention the power that the internet plays in this equation. The internet is that one tool that facilitates all the magic. Through the internet, one can connect, communicate, buy, sell, reach out, educate, and so much more! However, our focus is not on the internet as a whole, but on Social Media, namely Facebook, Twitter, and Instagram. These three online platforms have changed the dynamic of interaction and communication between people all over the globe, and have cause an evident impact that could not be denied.

As one of the most important pillars of iGEM is outreach and public engagement, it’s needless to say that social media platforms were our first option going forward! It wasn’t a long wait after our first meeting as a team before we had a Facebook, Twitter, and Instagram page already up and running. News about launching our social media accounts spread like wildfire in the first weeks as we ensured to spread the message all around our family and friends and made sure that they would in turn share our pages! The aim was to get all the people around us, those we know and those we don’t know, to be informed about the amazing iGEM. Over the course of the first weeks since the launch, we introduced the team members, by posting pictures and descriptions so the followers could get a closer glimpse of who we are as a team. As the weeks advance, we would share pictures of our weekly activities, decisions, basically anything worth sharing on our social media accounts.

As we reached July, the real work was about to start. We started posting about our experiments, our daily hours at the office, and most importantly, all of our goofy/fun activities! All throughout the summer, we received tremendous amounts of support and positive feedback from those who followed our journey either through Facebook, Instagram, or Twitter. The accounts also helped us connect better with other teams, facilitating communication and collaboration with teams from all over the globe. Lastly, we were contacted by a PhD student, completing his degree in philosophy. He found about iGEM through our Facebook account and has contacted via Facebook. He was extremely interested in our iGEM journey and asked to follow us for a couple of days, documenting our work; something that we felt extremely honored about!

At the end of the day, we could safely say that it was indeed an excellent choice to use social media as a tool for reaching out and public engagement. The accounts racked up over 1500 followers, people who were interested to know what were up to, and it was in return a pleasure to share our hard work with all those interested in reading about it.