KU Leuven is participating in the 2017 interlab study! This year's goal of the interlab study was: How close can the numbers be when fluorescence is measured all around the world?
Not only did these experiments count towards the bronze medal requirements, we also assisted in iGEM's efforts to improve reproducibility and reliability of experiments worldwide.


The KU Leuven team believes that lots of hands can make hard work lighter, with this attitude we decided to take part in the Interlab studies of iGEM 2017. Besides the acknowledgement of the team in the publication of this research, our main motivation was being part a bigger scientific community where results are shared and checked. This community allows to produce and create much more reliable results then when you would do it on your own. If you want to create an efficient, reliable and repeatable measurement protocol, you need to test the protocol numerous times. Results may vary because you are not always going to perform this protocol in the same lab and under the same conditions. To minimize the risk of false negative or false positive data, this protocol should be tested in as much different conditions as possible. iGEM used the opportunity of access to more than 300 different labs, with different equipment, well by introducing the Interlab Studies, in this way they are able to test their protocol in the best way possible. By generalizing a standard procedure in 1 protocol that would been used by all the researchers worldwide, lots of miscommunication and confusing data-analysis can be avoided. If everyone works with the same protocol, sharing and comparing information will get a lot easier which will benefit science and research in general.

We started our Interlab journey by transforming the parts (positive and negative control and 6 test devices) into Sub-Cloning Efficiency™ DH5α™ E. coli cells obtained from Invitrogen. We obtained several colonies for each plasmid, and were ready to continue to the next steps.

In the meantime, we have become more familiar with the plate reader: Perkin-Elmer Victor X4. First, we aimed to measure the OD600 reference point. For this, we used the closest available filter, at 595nm. Next, we calibrated the plate reader and prepared the fluorescein fluorescence standard curve. For this, we prepared the plate according to the protocol and measured the fluorescence using two different programs: Fluororescine 1s and Fluorescine 0.1s. Unfortunately, no further modes or options were available. The best results were obtained using the Fluorescine 0.1s program, and we used these settings for the further experiments.

We then selected two colonies from each plate and grew them overnight in LB medium containing chloramphenicol to activate the resistance marker. During this step, we were assisted by the iGEM Little Snazzy Man. Thank you, US AFRL CarrollHS team! The next morning, we continued with the cell measurement protocol. Our cells were diluted based on the OD600 measured in a spectrophotometer. 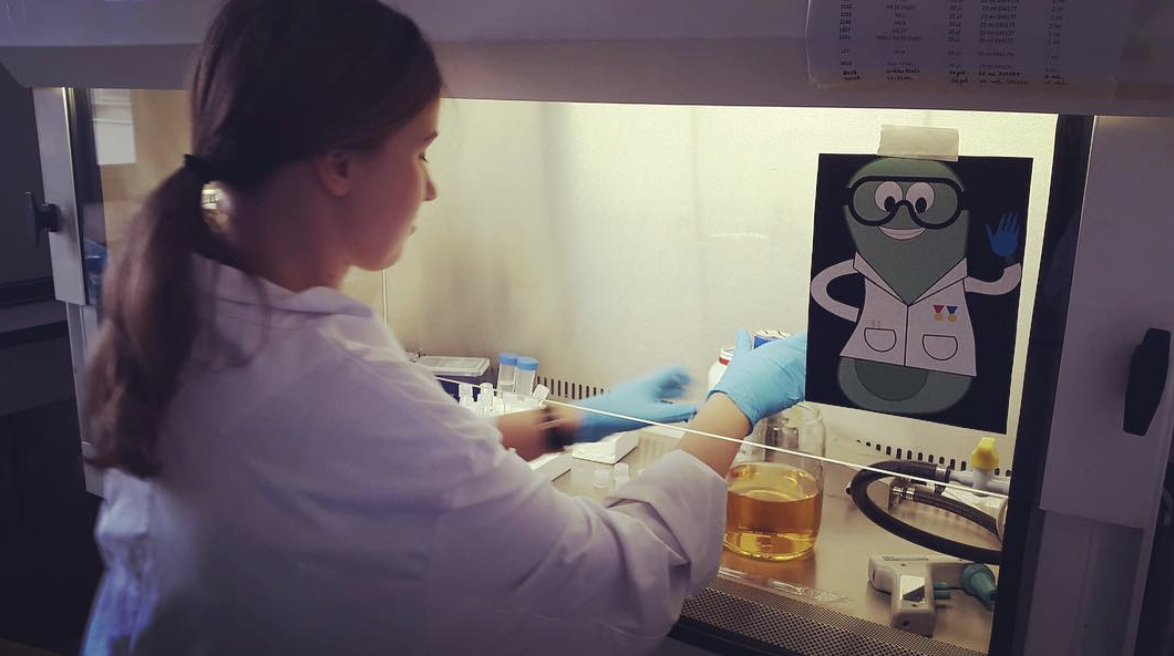 We also shared our adventures with the iGEM Little Snazzy Man on our instagram page.
We then immediately collected the samples after 2, 4 and 6 hours. They were kept on ice until the OD and fluorescence were measured using the plate reader. The obtained results are shown in figure 1. 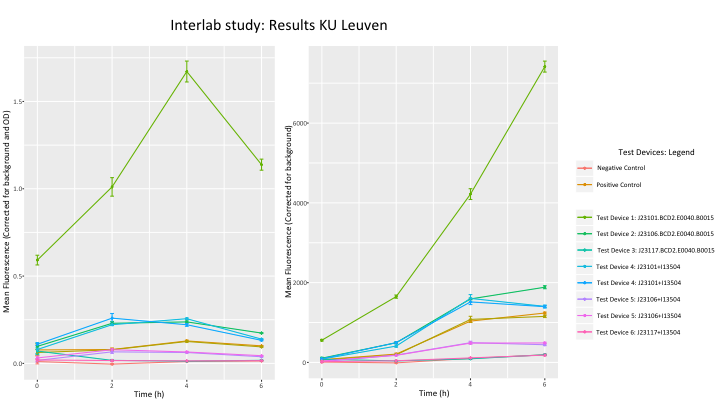 Figure 1: The results of the measurements for the Interlab study. On the left, the mean fluorescence value, corrected for both background signal and the OD of the samples, is plotted for each device. The line colors indicate the different devices, while the error bars indicate the standard error based on the two biological duplicates (originating from different colonies), each measured in four duplicates. On the right, the mean fluorescence value is shown, corrected only for background signal, not for the OD of the samples.
All data has been shared with the iGEM HQ and we are happy to have contributed to the interlab study! We hope these results can help improving the measurement tools available to labs worldwide.