The ability for parts to provide repeatable outputs is key to engineering applications, including design aspects found in synthetic biology. The purpose of the 2017 InterLab study was to address how reproducible outputs from standardized parts can be in different lab settings. The study also addressed what levels of protein expression could be driven by standardized promoters and ribosomal binding sites (RBS). Constructs were provided by the iGEM measurement committee which utilized green fluorescent protein as a reporter. This allowed the InterLab study contributors to easily follow protein expression driven by these standardized parts.

In order to better compare expression levels between research groups, the 2017 InterLab study incorporated calibration protocols to allow for reporting of fluorescence in absolute levels. Specifically, fluorescence levels from biological samples were calibrated against a fluorescein standard curve. Therefore, the resulting fluorescence results are reported in terms of the amount of fluorescence produced by a certain concentration of fluorescein.

The negative control for the InterLab study did not contain DNA coding for recombinant fluorescent-protein expression, thus this was well-suited for examining and accounting for background fluorescence of cellular components. The remaining constructs contained GFP (E0040) under the control of various promoters and ribosomal binding sites. The promoters and ribosomal binding sites utilized for Test Devices 1-6 are outlined below. All constructs contained E0040 (GFP protein sequence), B0010 (transcription terminator T1 rrnB from E.coli), and B0012 (transcription terminator TE from coliphage T7) following the promoter and ribosomal binding site.

All methods were based on the iGEM InterLab 2017 Plate Reader Protocol found here:

Day 2
Two colonies were picked from each sample plate and grown overnight in 5mL of LB + Chloramphenicol at 37ºC and 220 rpm.

Day 3
According to the provided InterLab study protocol, the OD600 and fluorescence were measured (excitation 485 nm, emission 530 nm) by our Microplate reader(SpectraMax® i3x Multi-Mode Detection Platform) at 0, 2, 4 and 6 hours. Clear plates for reading the samples were used. Full details of the protocol can be found here:

Calibration: Fluorescein Standard Curve
The SpectraMax® plate reader utilized for our data displayed a fluorescein-dependent increase in fluorescence. The data was plotted with both a linear, and a log scale x-axis (Figure 1). At very high fluorescein concentrations (25 and 50 μM), the data displayed a non-linear trend when plotted with a linear x-axis (Figure 1A), likely due to over saturation of the detector. However, the remaining details of the calibration curves are consistent with the result desired by the iGEM InterLab committee (values forming a straight line on linear and log scale x-axis, 1:1 slope, etc.).

Figure 1 - Fluorescein Calibration Curves showing the emission (530nm) due to the concentration of fluorophore in solution. A Linear x-axis. B Log scale x-axis. 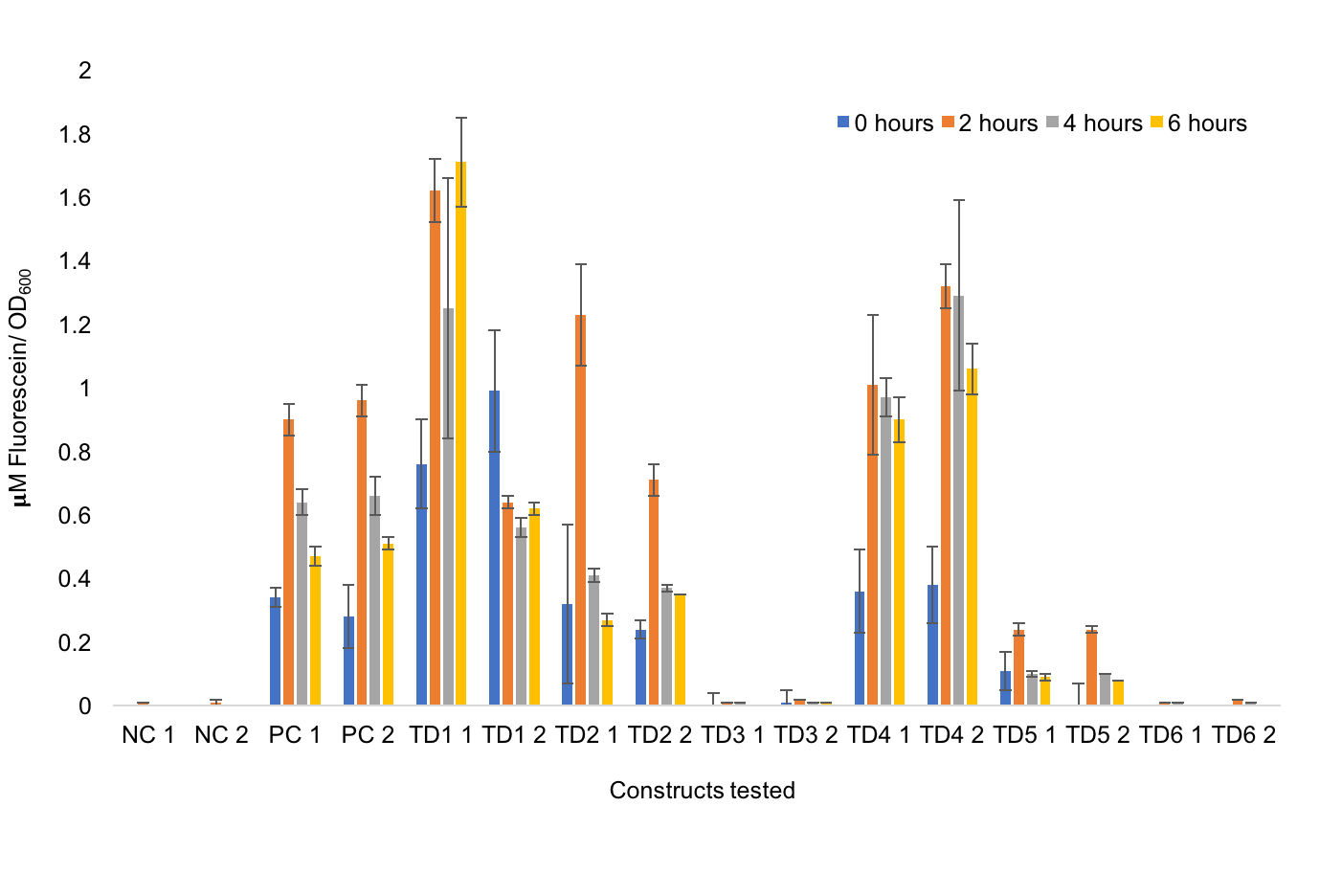 Figure 2 - Fluorescent Protein Expression of Test Devices. Fluorescent and OD600 measurements obtained at 0, 2, 4 and 6 hours represented as a bar graph in μM Fluorescein/ OD600 for the two controls and 6 test devices.

Promoter Influence
The lowest levels of fluorescent protein expression came from Test Devices 3 and 6. These devices both utilized the J23117 promoter, which had been previously characterized as being the weakest-strength of the promoters tested in the 2017 InterLab study (see J23100-J23119 on the registry of standard biological parts: http://parts.igem.org/Part:BBa_J23117). In terms of the remaining two promoters, constructs utilizing J23101 displayed higher fluorescence levels than constructs utilizing J23106. Because of this, we claim the relative strength of the promoters is J23101>J23106>J23117.