Testing for the Effect of Fluoride on CHOP on E. coli Growth at Different Concentrations of Chloramphenicol 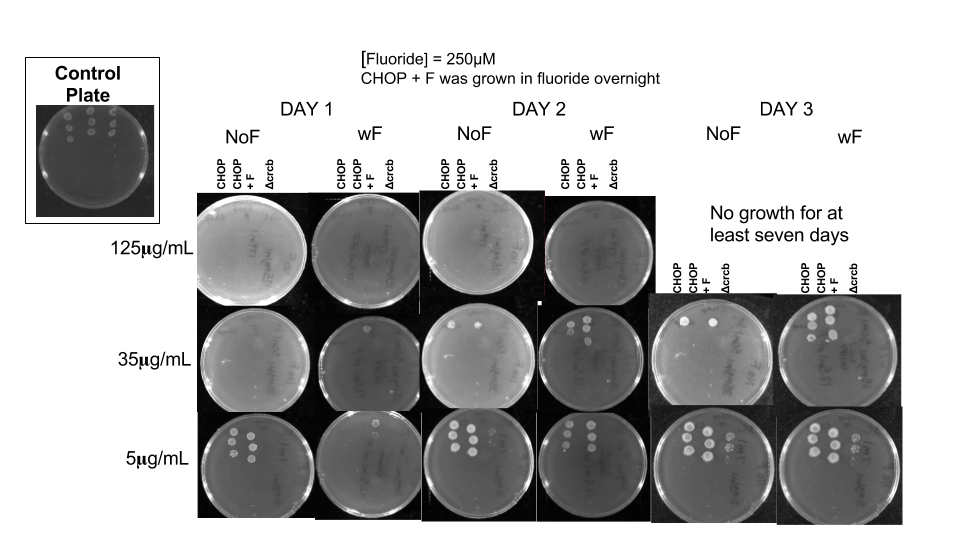 For 5ug/mL of chloramphenicol, both CHOP and delta-crcB grew, while for 125 ug/mL, none of them grew for all three days. However, on 35ug/mL, there was differential growth of CHOP on plates with and without fluoride. This allowed us to determine 35ug/mL as a reasonable concentration of chloramphenicol for future experiments.

Characterizing the Growth of ΔcrcB at Various Levels of Fluoride in the Presence and Absence of the Wild Type E. coli 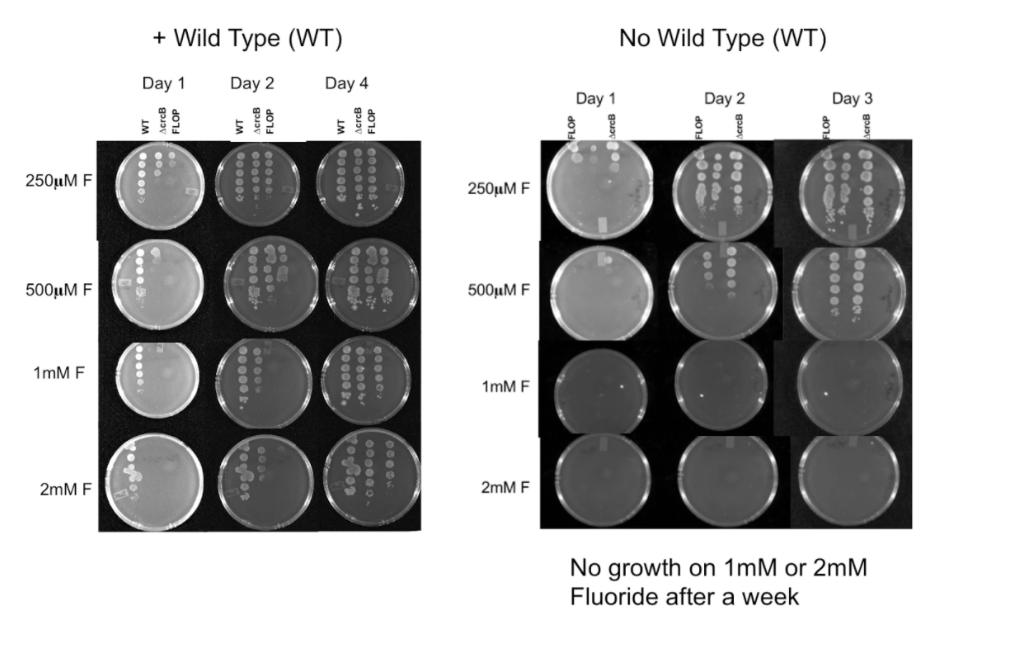 Wild type and ∆crcB were grown directly next to each other at varying levels of fluoride. As described in literature, ∆crcB should not grow when exposed to fluoride levels over 500µM. Unexpectedly, ∆crcB did grow on high levels of fluoride when placed on the same plates as wild type E. coli. Without wild type E. coli, no growth of ∆crcB was seen on 1mM and 2mM fluoride.
In order to figure out the cause of the unexpected growth, we reached out to Dr. Randy Stockbridge at University of Michigan for possible explanations. Dr. Stockbridge informed us that fluoride can only cross the membrane in acidic conditions as hydrofluoric acid. Therefore, we hypothesized that the wild type altered the pH of the agar to a more basic level, facilitating the growth of ∆crcB.

In order to test the hypothesis that the Wild Type E. coli changes the pH of the agar to allow growth of ΔcrcB, we plated WT and ΔcrcB together, and one without WT. All plates had either no buffer, or 20mM/50mM of MES (pH 6.5, slightly acidic), or 50mM of TRIS at pH 8 (slightly basic). All plates had 1mM fluoride. 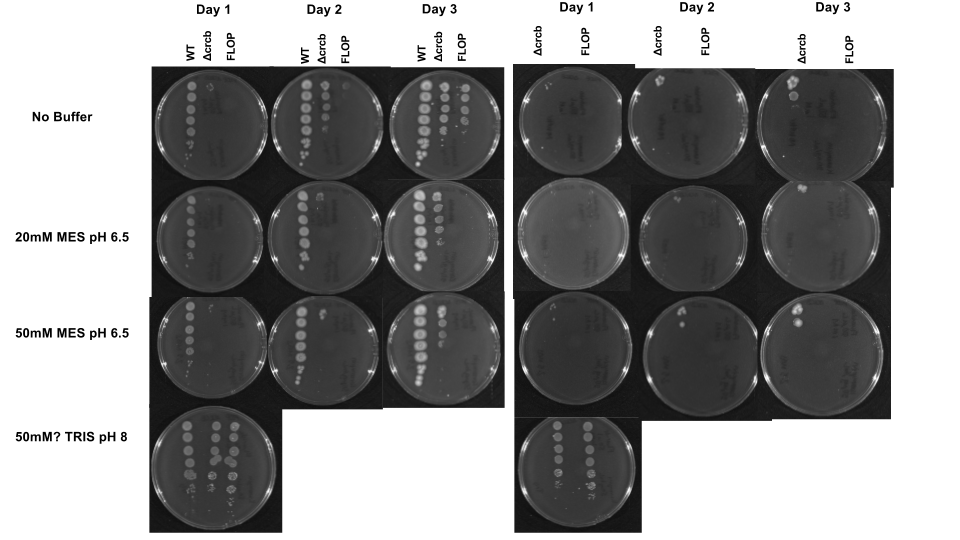 In this experiment, we show the role of pH contributes to fluoride toxicity. When we grew ΔcrcB on pH 8 in 1mM fluoride we saw robust growth regardless of the presence of Wild Type because fluoride is not entering the bacteria. On non-buffered plates our results mirrored our previous results, ΔcrcB can grow on high concentrations of Fluoride only after the Wild-Type grows. When we buffered the plates with MES pH 6.5 we observed even more delayed growth of ΔcrcB compared to the unbuffered plates when grown next to Wild-Type, and this delay was dependent on the concentration of buffer. This results show the the Wild-Type are increasing the pH of the plate as they grow, thereby providing protection to the ΔcrcB on toxic concentrations of Fluoride.

To confirm our hypothesis that Wild Type E. coli are increasing the pH of the agar plates, we prepared a similar set of plates, but with the pH indicator phenol red, for visual confirmation

Phenol red appears red at basic pH and turns yellow at acidic pH. In the absence of a buffer, wild type is able to alter the pH of the plate visibly turning it red. Accordingly, once the region of the plate where ∆crcB is plated turns red, the E. coli can grow.

To further confirm our results, we prepared the same plates with a MES buffer, which kept the agar at a 6.5 pH, which is slightly acidic.

Upon addition of the buffer, the change in pH was delayed, so fluoride could enter the cells and inhibit the growth of the ∆crcB strain.

Testing for Optimal Fluoride Levels and Dilutions for CHOP Growth

CHOP and ∆crcB (E. coli with the Fluoride Channel deleted) were added to 50µg/mL chloramphenicol plates and observed over the course of 4 days.