Scale insects like to be parasitic on many kinds of fruit trees, flowers, and crops. For example, succulent plants, apricot, and apple trees attract them a lot. Besides, the honeydew they secrete can cause sooty mould. Therefore, it is extremely important for farmers to prevent the rampancy of scale insects.

However, the way people use to kill the scale insect now is contaminant and inconvenient. The most effective method is to inject pesticide into the trunk, so when the scale insect bites the trees, they would be killed. However, chemicals into their body would also let them develop resistance to pesticides, and these traditional pesticides would cause other animals’ death in the earth and pounds*1. Another method for farmers is to use contact pesticides, which can be easily applied but have to be in a great amount. Though direct and convenient, the large amount of chemicals into the environment would cause damage to the trees surface*2. In order to bring convenience and safe to farmers, we decided to develop a bio-safe contact pesticide, which makes the pests-controlling process faster, stronger and better. 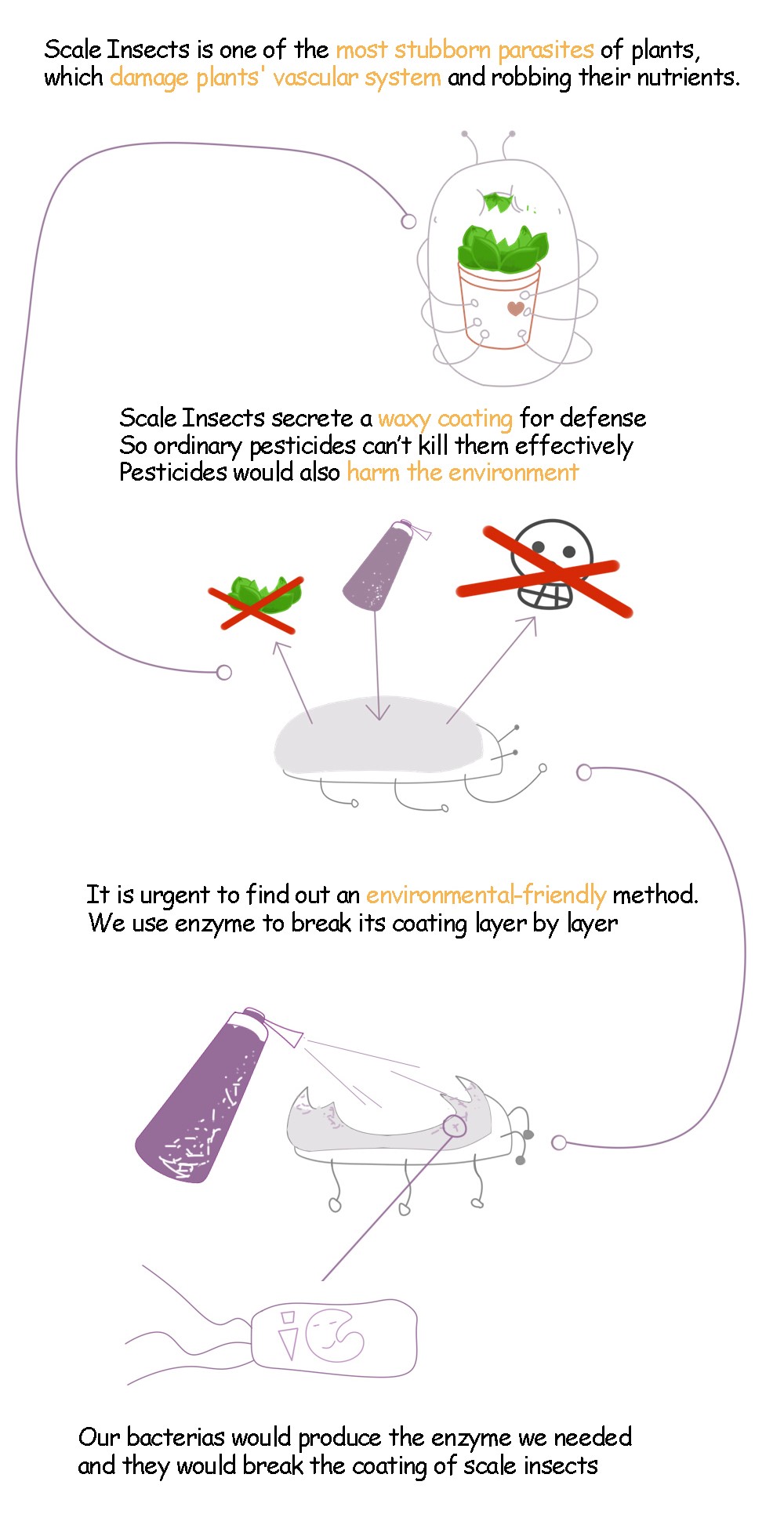 Without its shell as a protection, scale insects would find it difficult to make a living in the harsh environment, or at least, a little amount of pesticides is able to kill it. Therefore, we put forward our solution: decomposing the layers of scale insect with natural, safe enzymes.

In our project, we tested our enzymes which were transformed into E. coli and proved that they function well in degrading the shell. However, after we contacted some experts[], we realized that these enzymes may also cause harm to the plants. Thus, we developed a system to let the bacteria release pest-killing factors only when scale insect exists. Scale insect secrets sucrose (sugar) for ecological reasons. We then introduced a ‘sucrose-induced enzyme release’ system into E. coli. When contacting with the sucrose on the surface of scale insect, our engineered bacteria would kill themselves and release the factors, while they would not cause harm to the plants which do not secret sucrose.

Besides, we introduced another safety system into our bacteria to make sure that they would pollute the environment. A suicide process to let bacteria suicide after wipe out those pests. After killing the insect, bacteria would kill themselves because of the suicide gene. In this way, we can ensure that our method won’t affect any plants or fruits.

From past research, we know that chitinase and protease play the important roles when the entomopathogen is infecting scale insects. We found a specific entomopathogen named Verticillium lecanii. This kind of fungus feeds on scale insects, and it uses chitinase, protease to “open” the shell of scale insects. Thus, we use the chitinase gene (Genbank number: DQ412944.1) and Protease gene (Genbank number: HQ840790.1) from Verticillium lecanii to build two parts that compose of promoter, RBS, the coding sequence and the terminator.

There is also evidence that shows the ability of the cerase in Verticillium lecanii that degrades the wax layer*4, but the specific enzyme that function in this process has not been observed and sequenced. Thus, basing on these factors, we first transformed the chitinase gene and the protease gene into E. coli. To deal with the wax layer problem, we rely on the industrial enzyme and hope that future team can figure out the specific sequence of Verticillium lecanii’s wax enzyme.

Now with the ‘swords’ of chitinase and protease, we can open the shell of scale insects easily. But how can our E. coli sense the scale insects successfully? We do not want our E. coli to spread chitinase and protease everywhere, since those two enzymes especially the protease may cause damage to plants’ surface. We solve this problem by introducing the SacB ‘sucrose inducing enzyme release’ system.

‘SacB encodes the Bacillus subtilis levansucrase, which catalyses hydrolysis of sucrose and synthesis of levans (high molecular weight fructose polymers). It is lethal to gram-negative bacteria E-coli.’*5 And we know that scale insects secrete honeydew that contains amino acid and sugar, such as cane sugar. Those secretions can cling on the surface of the scale insect’s shell. Above all, if we put SacB gene into our E. coli, they would recognize scale insects easily and specifically. Then, if our E. coli meet some cane sugar that is placed on the surface of scale insects, the bacteria would suicide and release the pest-killing factors.

In general, we introduced three core parts in our project. First are two parts expressing enzymes that would degrade the thick layers of scale insect. Second is a part called SacB which makes sure that the powerful factors would only to secreted on the pests. With these three parts, the main body of our research has been done and our experiments were able to be carried our.

According to our explanation above, it is necessary to predict the result we would get from this project. As we all know, scale insect is the nightmare of many succulent plants and fruit, so probably this project would be used in agriculture and farming.

We can design a pesticide kit that contains 3 kinds of engineered E.coli, which are separately designed to produce 3 kinds of enzymes. Farmers can easily mix them together at a certain portion and spread the pesticide to the scale insect. Since we don't want E.coli to have any competition with each other, those 3 kinds of E.coli should be cultivated and kept separately, and they would only be mixed just before people spray trees or crops with the final insecticide.

In order to eliminate the possibility of damage during transportation process from the lab or pesticide company to the customer, we collaborate with team SIAT-SCIE. The special technique developed by team SIAT-SCIE would keep our product safe and make it convenient enough for long-time transportation. Thanks to team SIAT-SCIE, our project becomes more reliable, controllable and applicable.

*2 This information was given by Heng Gui, a botanist from Kunming Institute of Botany.