The outcome of an environmental project, like the Salt Vault, depends on thoughts on its feasibility and application. If no thought is given to application or use, the picture is not complete, just like a puzzle. Within our project we developed a design for the possible implementation of desalinating yeast into wastewater treatment and discussed its necessity in comparison to conventional desalination methods. Follow the flowchart to gather information on the applied design of a new way to handle wastewater – the Salt Vault.

Reverse Osmosis is an established technology to remove salt from water by retaining solvent molecules on a semipermeable membrane. This method is used in a variety of applications in saltwater desalination plants of countries struggling with freshwater supply. Reverse osmosis purifies water completely from all kinds of pollutants and molecules. However, it has got significant disadvantages, making it necessary to think about alternative solutions.

The theoretical approach of reverse osmosis is rather simple: A high external pressure is applied to the contaminated solution resulting in water moving to the permeate side while diluted substances even on molecular basis are hold back. Since this application is used in an extensive way worldwide, it is necessary to talk about this method in detail. We want to showcase some of the disadvantages of reverse osmosis and some applications where reverse osmosis might not be a good method to clean water from certain contaminants. Summed up, there are three main disadvantages to reverse osmosis: 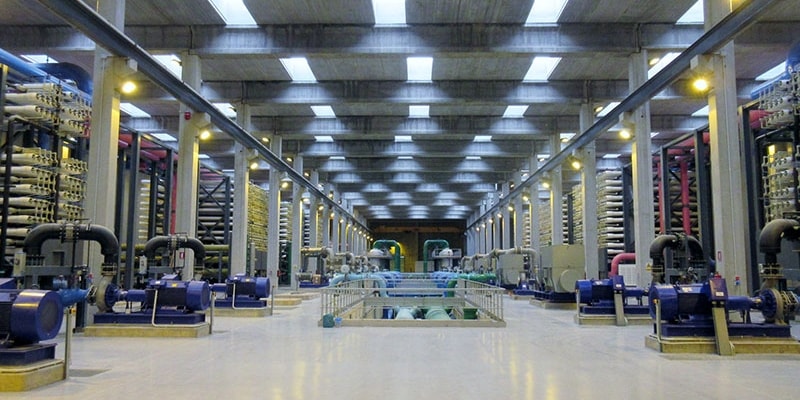 Energy consumption and maintenance are responsible for up to 95% of the running costs of a reverse osmosis plant [1]. Not considered in this are the high building costs of such a plant. Most plants experience severe maintenance problems caused by fouling or breakage of pumps and compressors [1]. As a result most plants run with only 40-80% of their maximum performance and cause increasing water costs due to low productivity [1]. When plants struggle with their productivity production costs for water can rise up to more than $3.50/m3 [1]. A water distributor in Aachen, as a comparison, produces its drinking water from surface water with production costs of $0.8/m3.

Reverse osmosis guarantees complete purification of water from solvents, making it best suited for seawater desalination. However, water, free from every solvent is not needed for ecological applications. Therefore, important ions and solvents are resolved in the right concentrations after treatment, making reverse osmosis unspecific and the application inefficient. Organisms on the other hand express highly specific transporters, making our Salt Vaults specific for differing ions. In conclusion, resolving of solvents needed for households or agriculture is not needed, making the process significantly more straight-lined.

Reverse osmosis plants consist of multiple treatment steps that all produce different effluents. The biggest part of these effluents is the concentrate from the reverse osmosis lines [2]. Its volume is huge and varies between 40 and 60% of the feed flow rate [2]. Resulting from the principle of reverse osmosis, the concentrate has a highly increased salt load (up to 9g/l of chloride [3]) making its discharge, at least in the inland, complicated and expensive. As reverse osmosis is commonly used in salt water desalination plants at the coast it is obvious to discharge the salt concentrate back into the marine environment without treating it, which was the common method for many years [3]. This practice has been clearly linked to a list of detrimental effects on some of the ecosystems around the outlets of the salt concentrate [4], like massive losses of coral, plankton and fish in regions of the red sea [5] or reductions in the abundance of plankton, sessile invertebrates and echinoderms [6]. Because of these negative effects the concentrates are a potentially serious threat to marine ecosystem making environmentally friendly alternatives necessary [3,2]. 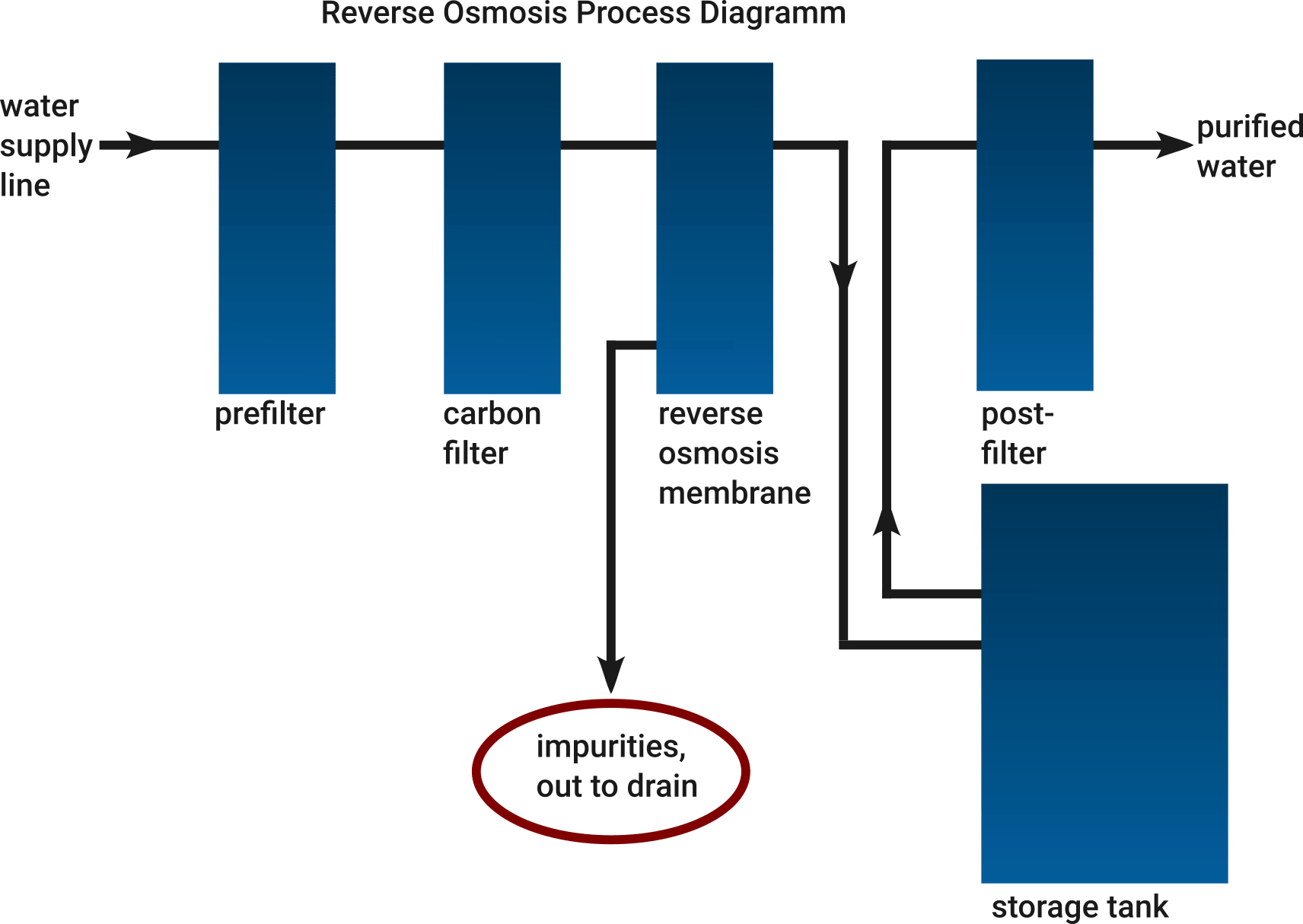 At the moment it is established to dilute these concentrates with other waste water to lower the salt concentration [2,4]. But there are also problems with chemical burden from agents to enhance flocculation, prevent foaming or to avoid membrane deterioration [7].

When reverse osmotic plants are located inland there is no possibility to pump the concentrate into seawater, making it even more complicated to discharge it [3]. The cost of this process increases the total production costs for inland desalination plants up to 33%, making it an inefficient solution for e.g. industries or municipal sewage treatment plants [8,9]. There are alternative possibilities to discharge the concentrate into the sea but these methods often have low productivity, need high chemical dosages and have high investment costs combined with high energy consumption [3]. 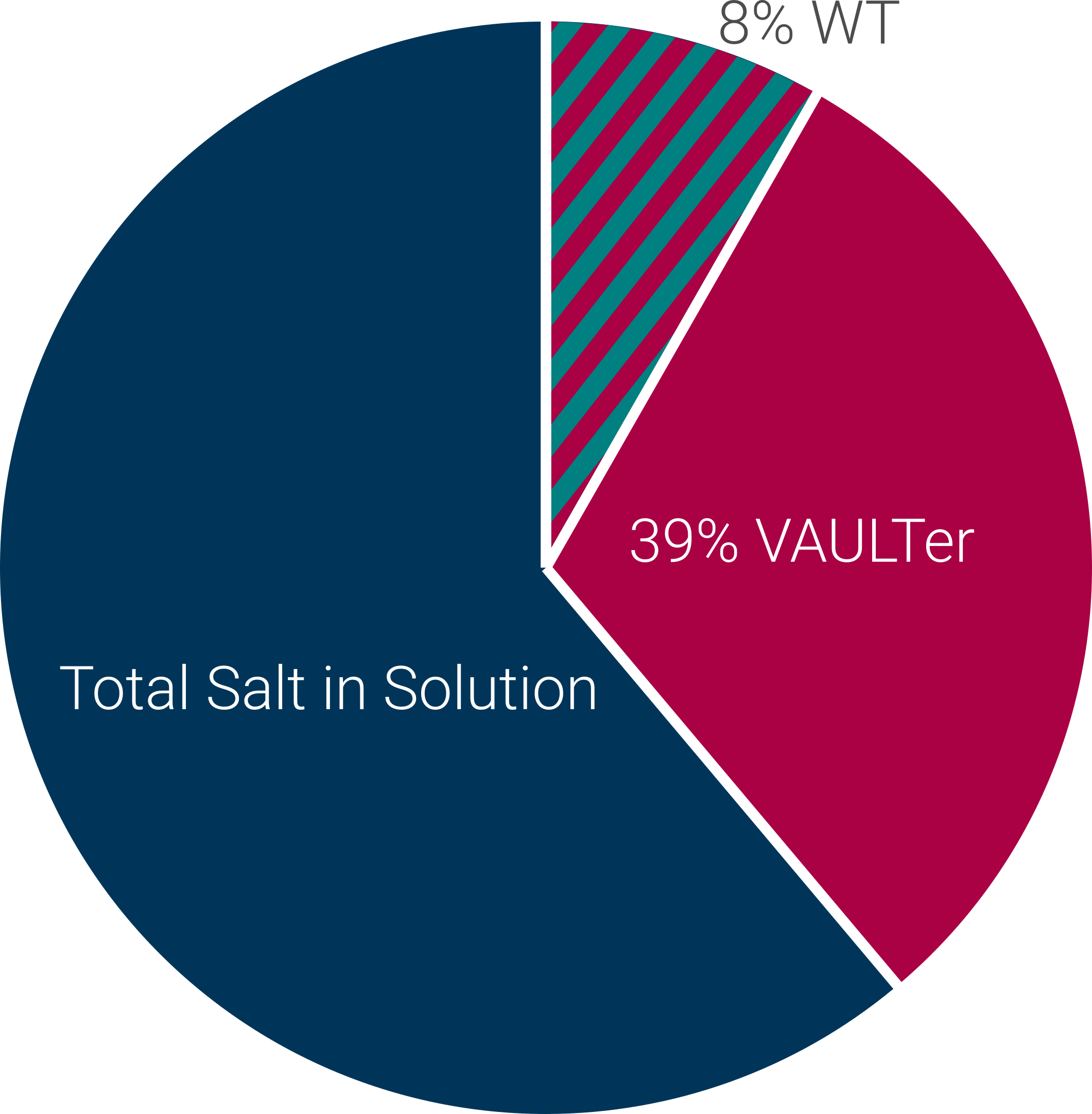 Salt taken up from solution

The most promising Salt Vault we created is capable of taking up X times more NaCl than the native wildtype. This Salt Vault with a dry mass of X g/L sequestrates X % NaCl of a media containing 0.6 M NaCl (35,1g per Liter), which is equal to the average salt content of sea water. A dry mass of X g/L is roughly equal to the concentrations of bacteria in industrial wastewater treatment plants. Being specific for certain ions, the Salt Vault purifies the water only from wished solvents, in this case NaCl, making it more efficient than reverse osmosis. With the vision of a microbial supercollector, a huge range of specific pollutants could be removed from differing wastewaters.

The use of a genetically modified organism raises the question how to separate the yeast from water. The answer is membrane technology - the much more energy- and maintenance-efficient micro- or ultrafiltration, which guarantees complete separation of the yeast from the purified water. 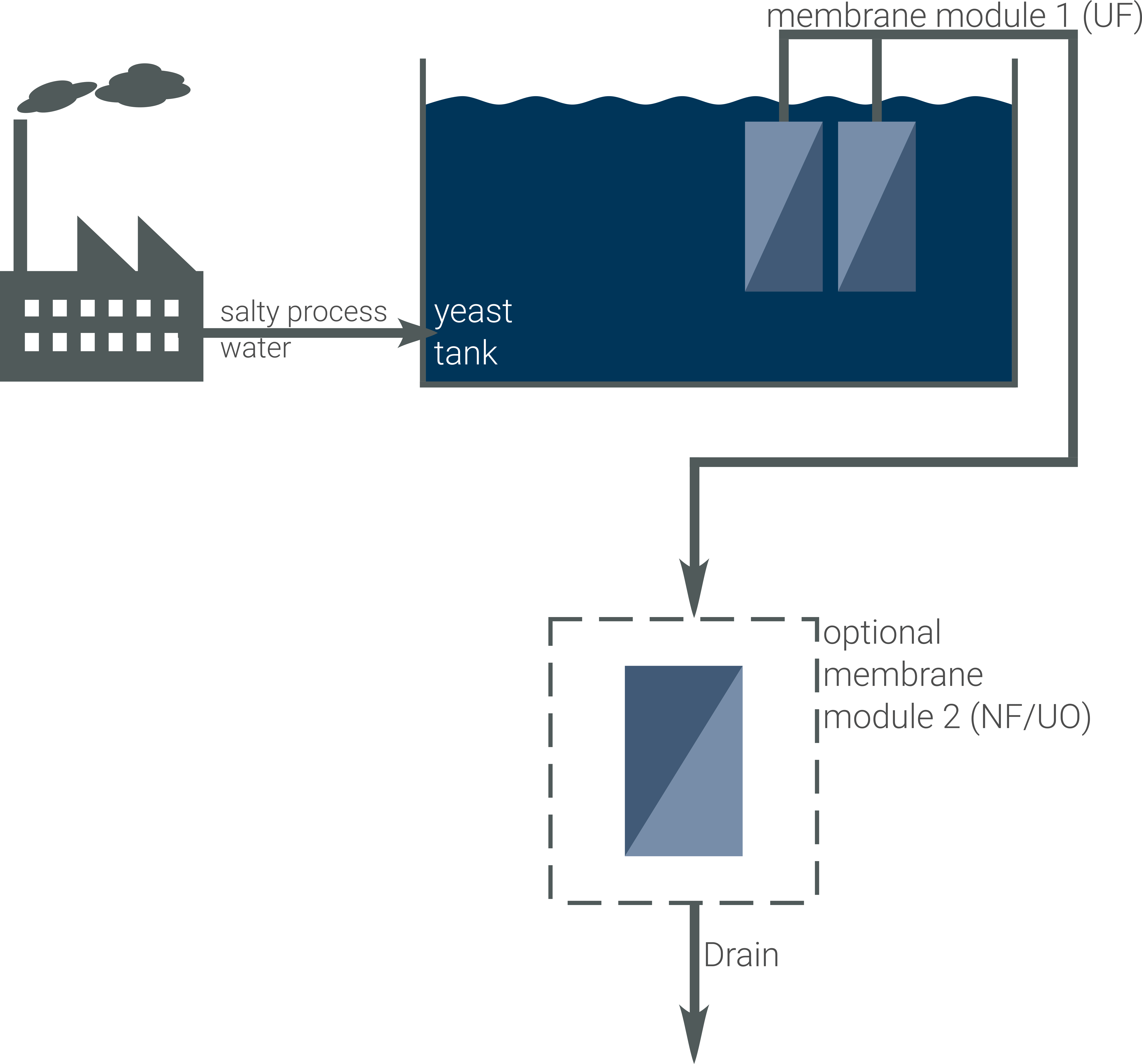 Different pore sizes conclude in different pressures needed to press water through the membrane. Reverse osmosis is highly energy-consuming with pressure differences across the membrane of up to 120 bar. Micro- and ultrafiltration on the other side are significantly more energy-efficient with needed pressure differences of 0.1-3 (microfiltration) and 0.5-10 bar (ultrafiltration) [1].

The use of micro- or ultrafiltration concludes in lower costs due to lower pressures and redundant pressure stability of machine parts. Additionally, the whole set-up of the filtration-methods is simpler and less maintenance intensive, which is one of the main disadvantages of reverse osmosis.

In cooperation with GE, a producer of membrane modules, we were able to prove the crude and maintenance efforts needed for ultrafiltration by conducting a membrane experiment to separate yeast from water with a small-scale ultrafiltration membrane, which is commonly used in wastewater treatment. See Integrated Human Practice – GE

Together with the membrane, provided by GE, we used a conventional piston pump creating a low-pressure of around 0.5 bar to purify 0.625 liters of water per hour from yeast with success. The flux of 0.625L/h is equal to a flux of 7500L/h through a membrane surface of 300m2.These numbers approximately simulate the fluxes in small wastewater treatment plants using membrane technology.

Together with micro- or ultrafiltration, well-established methods in wastewater handling, the desalinization of water from ions using a modified yeast is significantly more energy- and maintenance-efficient than using reverse osmosis to separate the ions. 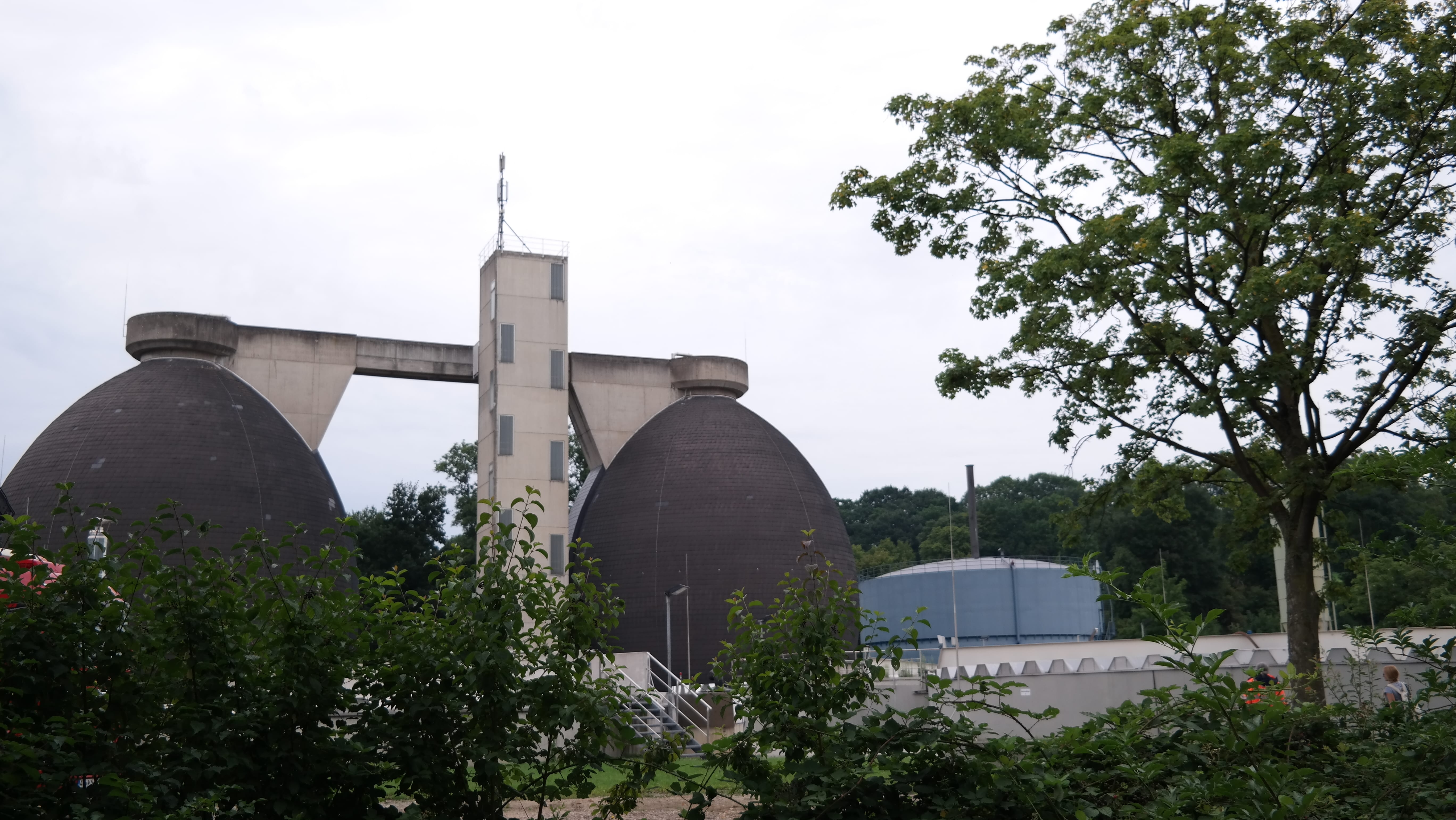 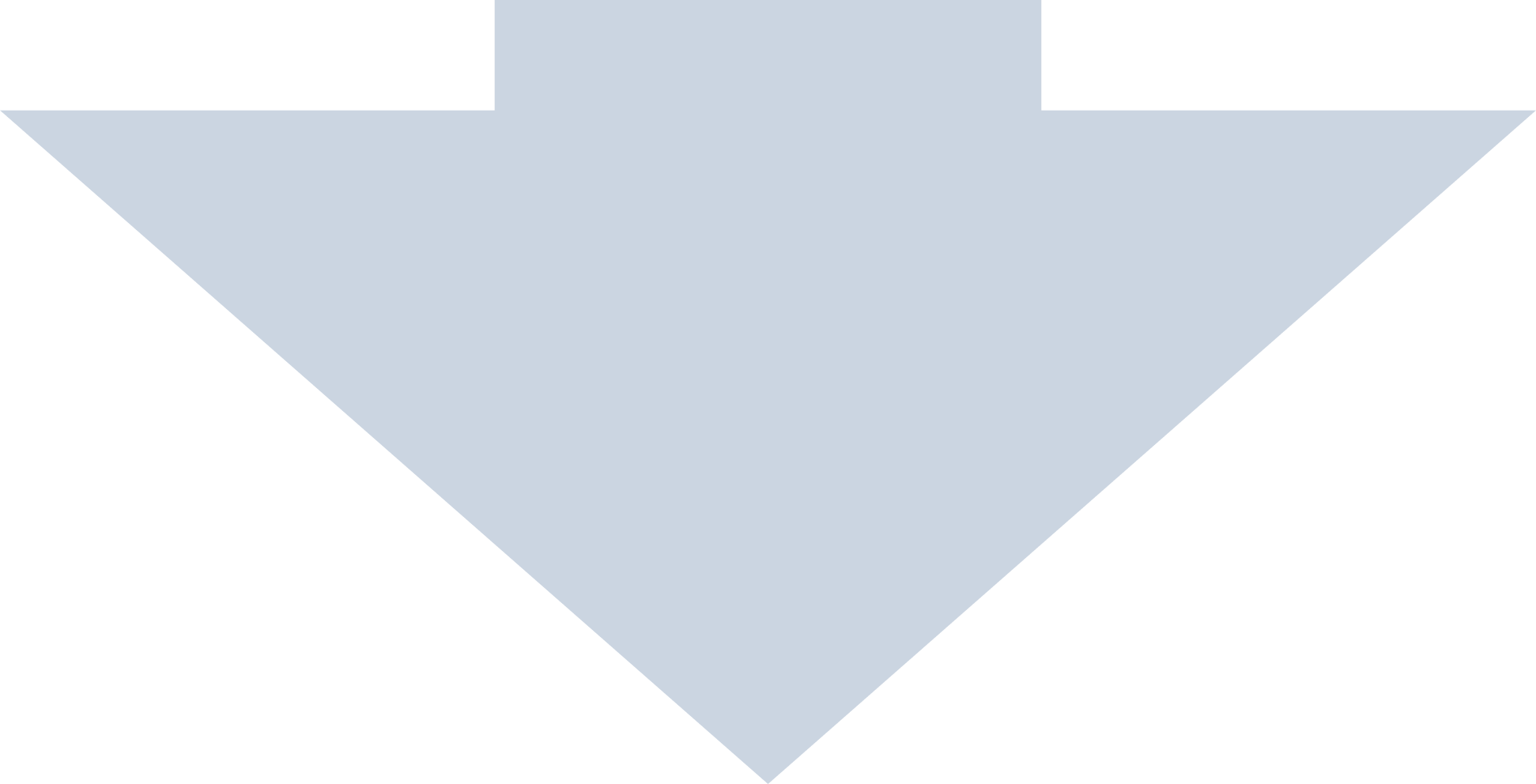 Nutrition and after-usage of the yeast remain as unsettled questions for an application in wastewater treatment. Yeast is not able to grow directly in salinized water, making separate breeding necessary. Growth of the yeast depends on the availability of an external C-source, a cheap by-product of many industrial processes. A meaningful nutrition of the yeast must be set-up for specific industrial applications. After separation of the water, yeast, filled with ions, drop behind. We utilize the nutritional value of yeast and add it to fouling towers for enhanced gas production. Final burning of the cells would leave behind dry salt, which must be re-used or stored permanently.

We conducted measurements of the salt uptake capabilities of different mutants by inoculating a diluted pre-culture in growth medium containing 0.6 M of NaCl. The mutants which showed high ion uptake did not show significant growth. In application, a preculture has to be inoculated separately before desalinization of wastewater, which means another installation for breeding the preculture has to be built. Nevertheless, the yeast is a self- renewing desalination method, which has low maintenance costs. In comparison to the maintenance-intensive reverse osmosis, this depicts another advantage.

The relative cell mass over time measured by a growth profiler 960 (EnzyScreen) in 0,6 M NaCl YPDGal.

A specific nutrition-plan is important to check if by-products of industrial processes could be reused or external sugar must be bought from food industry. The cooperation with Sitech has shown that industrial wastewater treatment plants buy cheap sugar from food industry to feed their bacterial mix and do not assume it to be a big cost factor. (Link: NL) Use of a C-source which is by-product of a corresponding industrial process is an optimal solution to confirm the general trend of industries towards a recycling economy.

In conventional plants the bacterial sludge is drained and fouled in fouling towers over weeks. There, methane is produced, which can be transferred into electrical energy. A wastewater treatment plant like the one in Düren, Germany, is capable of producing up to 60% of their energy household with fouling. (See Sewage Treatment plant)

Yeast is an optimal nutrient for these bacteria. Cases in wastewater treatment plants in Germany have shown that yeast added to the fouling tower significantly enhanced the energy production. We take advantage of the high nutritional value of Salt Vaults to enhance energy production. Substances like H2S disturb the gas production of bacteria, NaCl or heavy metals on the other side do not have impact on the fouling. These effects support our application for enhanced energy production. However, with our vision of microbial supercollectors for various kinds of pollutants, the possibility of fouling should be discussed for every specific kind of pollutant.

Most wastewater treatment plants, like the one in Aachen (Link: IHP sewage treatment plant), have traces of heavy metals in their fouling sludge, therefore the sludge is burned after fouling. Industrial plants, like the one at the Chemelot Industrial Site in the Netherlands (Link: sewage treatment plant) burn the sludge directly without fouling, telling us that burning is a well-established method to handle the cells after water treatment. Burning of Salt Vaults leaves behind dry salt. This salt, like heavy metals, has to be stored permanently after burning. Depending on the purity of the salt, it could be re-used for industrial processes. An example is chloride chemistry, where chloride is needed as a central molecule. 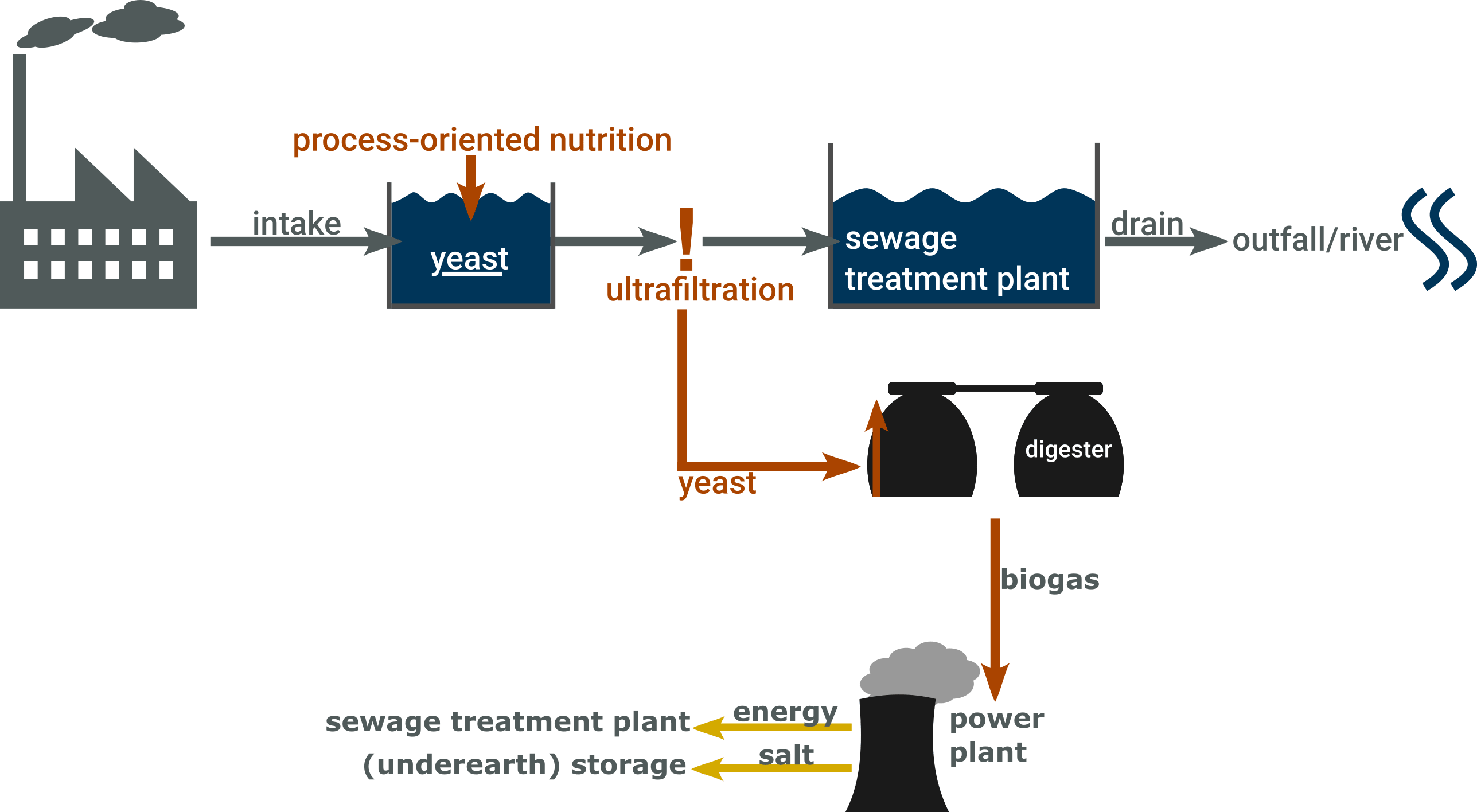