Being one of the biggest interlaboratory studies done in synthetic biology, iGEM’s InterLab Study aims to aid the Measurement Committee in the development of a robust GFP measurement procedure. The 4rth InterLab happening this year wants to establish a universal GFP measurement protocol. Following different established fluorescence protocols from labs around the world will help us understand how reliable different plate readers are and how close these worldwide results are to one another.

We calibrated the (TECAN Infinite M1000) following the calibration protocol. The same cuvettes, plates and volumes were used to avoid calibration errors. Next, we determined the fluorescein standard curve through dilution series in 4 different replicate rows. Using the settings for GFP, the 4 rows were measured and the results were used to determine the resulting curve.

Once the calibration and fluorescein standard curve measurements were completed, we performed the cell measurements using the transformed E. coli DH5 alpha strains. The colony containing test device #1 presented problems when transforming. Following the protocol, all cultures were measures and the results recorded. 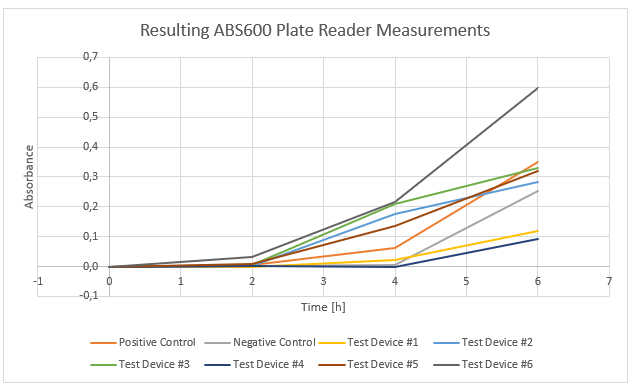 Resulting ABS600 Plate Reader Measurements The differences between the raw ABS600 plate reader and the blank measurements were calculated. The graph shows the relationship between this difference to time, measured in hours. 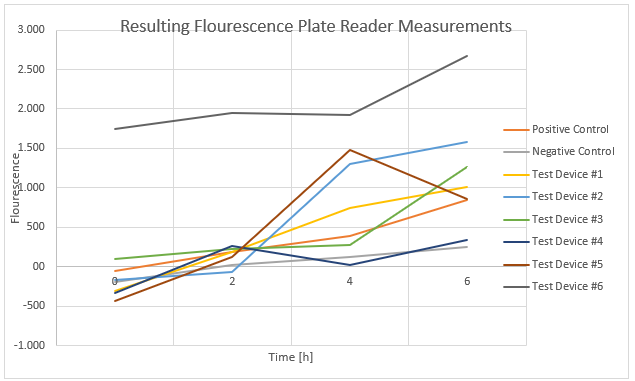 Even though the measurements were performed on a transparent micro plate, the results came out as expected. We noticed that the preferred wavelength (495 nm) made the fluorescence values with lower pigments concentrations rather unmeasurable. The results became relevant about 4 hours in. The values using this wavelength did not show the expected linear relationship between the fluorescence intensity and fluorescein concentrations. Therefore, we decided to redo the measurements series using a wavelength of 398 nm as stated in our labs protocol. This choice seemed to be a good decision since the results showed the expected linear relationship.