What is Parkinson's Disease?

Parkinson’s disease (PD) is a neurodegenerative disorder affecting dopamine-producing neurons in the substantia nigra in the brain. Dopamine, a neurotransmitter and important messenger between two brain regions, the substantia nigra and the corpus striatum, is necessary for controlled movements. Shortages of dopamine cause communication between the substantia nigra and the corpus striatum to become ineffective and, as a result, basic movement becomes impaired. The greater the loss of dopamine, the worse the movement-related symptoms. This is why many individuals afflicted with PD express symptoms of shaking, rigidity, slowness in movement, impaired balance, and difficulty in walking, among other things. As symptoms get worse, essential actions such as chewing, talking, or even swallowing may become difficult for an individual. Dementia, loss of sense of smell, and cognitive impairment are also apparent in the most advanced stages of PD.


What are the current Treatments?

While it is well known that a lack of dopamine causes the motor symptoms of Parkinson’s, it is unclear why PD develops and why dopamine-producing cells in the brain begin to deteriorate. Despite this, there are a number of established treatments that aid individuals in overcoming PD. However, these treatments, as with all treatments, have theirs own cons:


What is our project?

Quite simply, our project involves building DNA circuits that produce and sense L-DOPA using bacteria. But, why have bacteria producing L-DOPA? Our answer lies in the gut microbiome; although still not fully understood, the bacteria living in the intestinal tract could potentially serve as a chassis for L-DOPA producing circuits. Similarly to Levodopa treatments by way of orally-taken pills, L-DOPA would be absorbed into the bloodstream from the digestive tract and could pass through the blood-brain barrier to the brain, where L-DOPA would be converted into dopamine. 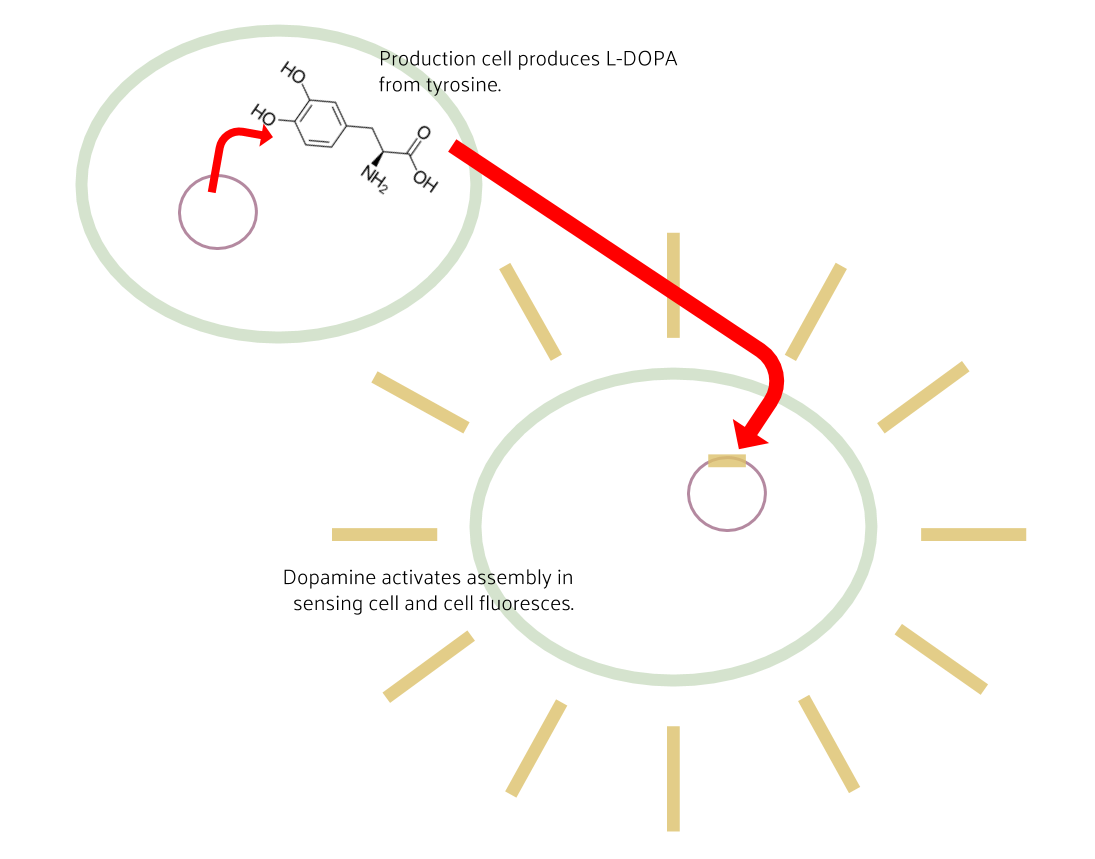 Unfortunately, our project never reached the stage where we were able to test our circuits in any gut bacteria, be they human or otherwise, but we did build and test our circuits in lab strain E. coli.
Our project consists of two separate E. coli cells, each with its own specific circuit: one cell, the ‘production’ cell, focuses on the production of L-DOPA while the other cell, the ‘sensing’ cell, senses and reports the production of L-DOPA by the ‘production’ cell.