Part of our project concerned an assembly that produced L-DOPA (levodopa or L-3,4-dihydroxyphenylalanine) from L-tyrosine in E. coli.


L-tyrosine can be converted to L-DOPA by the enzyme tyrosine hydroxylase. An equivalent of tyrosine hydroxylase in bacteria is 4-hydroxyphenylacetate 3-monooxygenase which is expressed by the genes hpaB and hpaC in E. coli. To simplify our assembly, we designed our construct to position hpaB and hpaC coding sequences in succession under the control of CP25 promoter which constitutively expresses downstream coding genes.


We constructed our production assembly by cloning a CP25-hpaBC-rpoc transcriptional unit into a vector containing a pMMB67EH ori and spectinomycin resistance marker. Our construct was assembled using golden gate cloning techniques. To do so, we first used golden gate to assemble all individual parts (CP25 promoter, hpaBC, rpoc terminator, and backbone) into entry vectors with the Type II restriction enzyme BsmBI. From there, the entry vectors were used to assemble a cassette plasmid with the Type II restriction enzyme BsaI. Cut sites for BsmBI and BsaI had been added previously to all parts by the Ellington Lab through the use of primers and PCR amplification.


We made a similar assembly using the same methods; in this assembly, however, we used PA3 promoter, another constitutively expressed promoter, in place of CP25 because we were afraid CP25 was too strong of a promoter.


Here is a brief overview of each main constituent of the hpaBC transcriptional unit:

The second half of our project revolved around an assembly that sensed the production of L-DOPA.

Our sensing construct consisted of two primary transcriptional units: one with the pp2551 coding gene and one with the Venus fluorescent protein coding gene. We constructed this assembly using golden gate, gibson, and traditional cloning techniques. 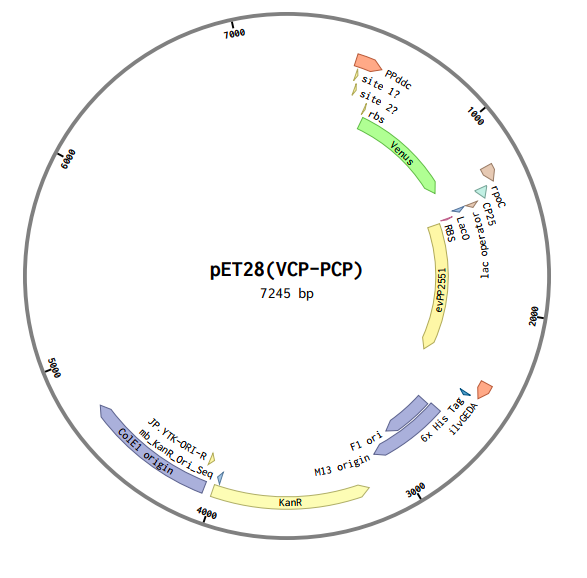