Vector construction:
pHisx6 is an IPTG-induced expression vector with a 6xHis tag at the N-terminal of its fused protein and a PelB-CALB exocrine lipase cDNA inserted at the multiple cloning site. Since a signal peptide of an expressed protein can be always cleaved in the periplasmic space of bacteria, the His tag at the N-terminal is generally excised together with the signal peptide. To trace the synthesis and secretion of the recombinant lipase, we also added another Hisx6 tag at the C-terminal of the PelB-CALB lipase. Meanwhile, to enhance the flexibility of Hisx6 tag, a peptide with seven glycines + one serine was used to link the exocrine lipase with the C-terminal Hisx6 tag. As showed in Fig. 1A, the predicted cDNA size of PelB-CALB is 1,024 bp, which matched our experimental results. The diagram of the expression cassette was shown in Fig. 1B.

Figure 1. Electrophoresis of PelB-CALB coding fragment (A) and expression cassette of pHisx6-Pelb-CALB (B). 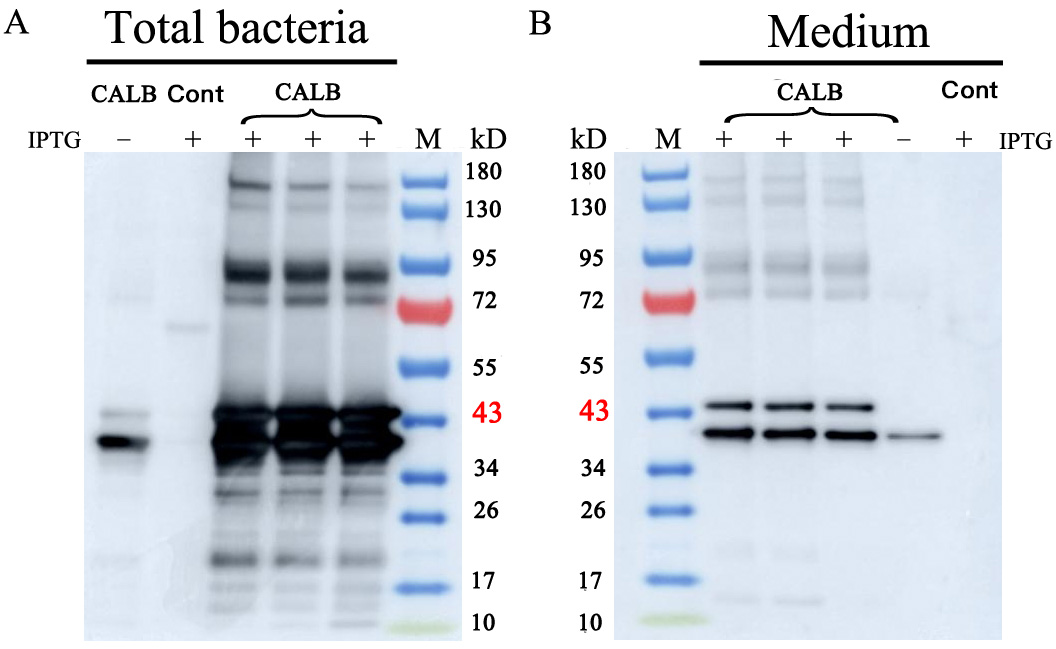 According to the theory that copper can combine with fatty acids and then be extracted by organic solvent, we measured the levels of associated copper to indirectly quantify fatty acids generated by Follower D. As compared to the control, the fatty acid concentrations dramatically increased in Follower D group, and reached to a plateau from 200 μM to 800μM of glyceryl tributyrate (Fig. 5). The result indicated that the CALB secreted by Follower D could efficiently convert glyceryl tributyrate into fatty acids. 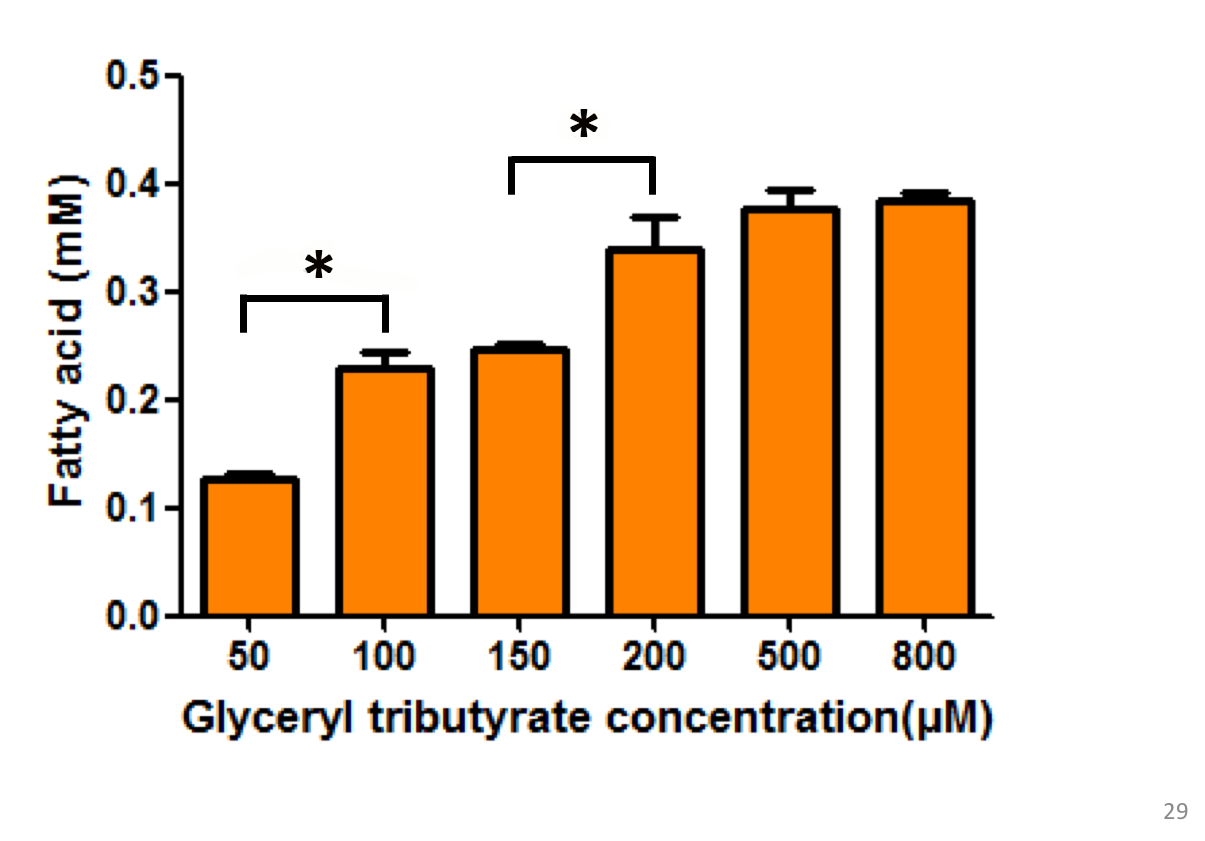 Function: It expresses a fatty acid binding protein (FABP) on its membrane to make the bacteria carry fatty acids. 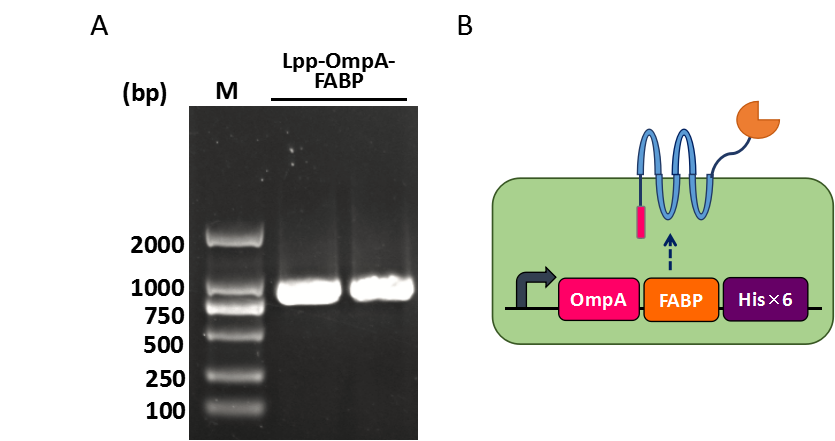 Figure 6. Electrophoresis of Lpp-OmpA-FABP coding fragment (A) and the expression cassette in pHisx6-Lpp-OmpA-FABP vector (B).
M, the DL2000 DNA ladder.

To confirm whether the pHisx6-Lpp-OmpA-FABP vector could successfully express the fusion protein, we used Western blot to analyze both total bacterial proteins and cytomembrane proteins. The results showed that a protein with a size of predicted Lpp-OmpA-FABP fusion protein was clearly detected in samples with Follower E compared to the control group (Fig. 7A). Because Lpp-OmpA was designed to anchor FABP on the outer membrane, we determined whether FABP was indeed present in the bacterial outer membrane. As we expected, FABP protein expression was steadily detected in outer membrane, but showed relatively low levels in cytoplasmic portion of Follower E (Fig. 7B). These results demonstrated that Lpp-OmpA could anchor FABP onto membrane; thus, pHisx6-Lpp-OmpA-FABP vector could work successfully, as we predicted. 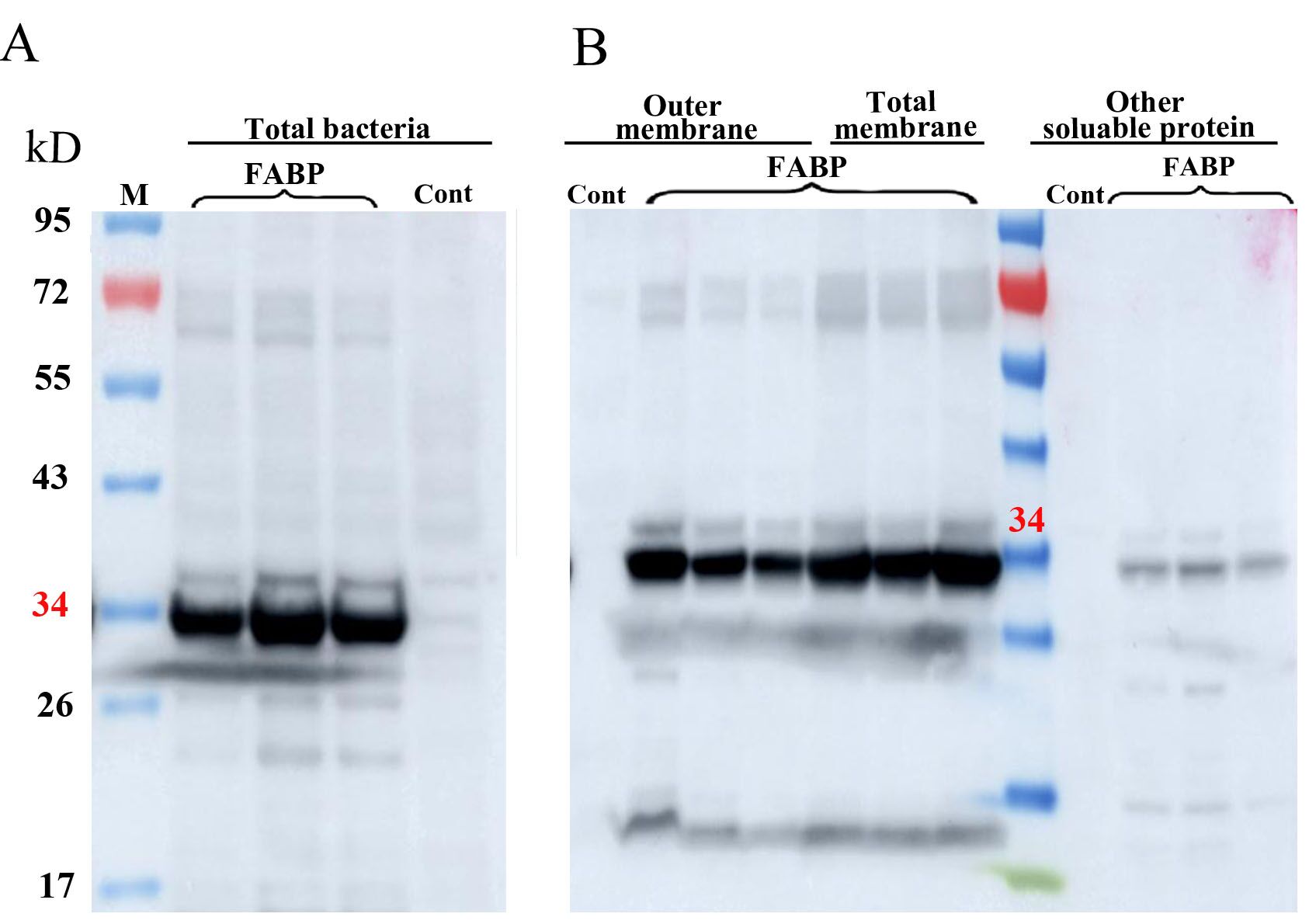 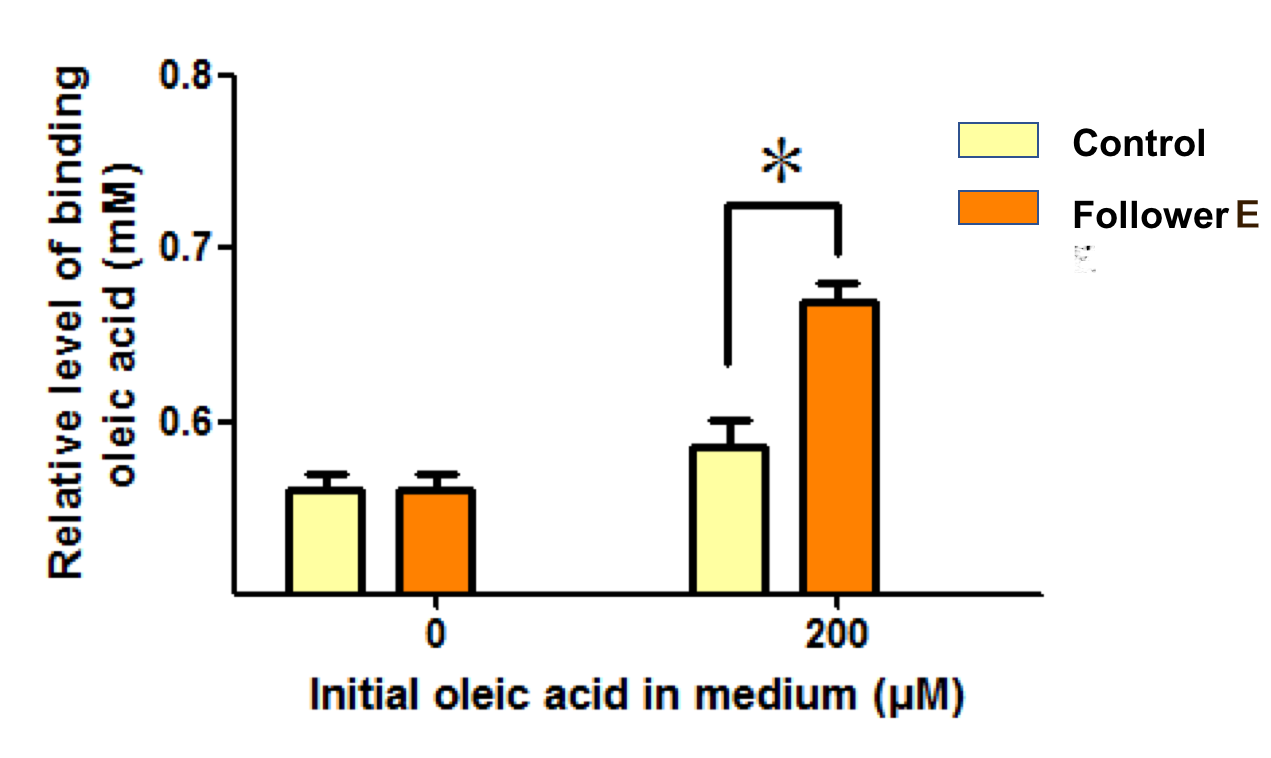 We will continue our experiment on proving whether the whole system works as we initially designed (Fig. 9). The experiments to be conducted in near future include: we will add Followers and embedded Leaders into a pond of still water with fat pollution; we expect that Leaders will repel Followers by secreting leucine; Followers will decompose fat into fatty acids and then carry them the fatty acids on the membrane; we will add arabinose to induce serine synthesis and secretion, which will make Leaders attract fatty acids-loaded Followers to allow efficient metabolism of fatty acids into sophora. In these experiments, we will monitor the concentrations of fat and fatty acids regularly, and determine the production of sophora by HPLC. 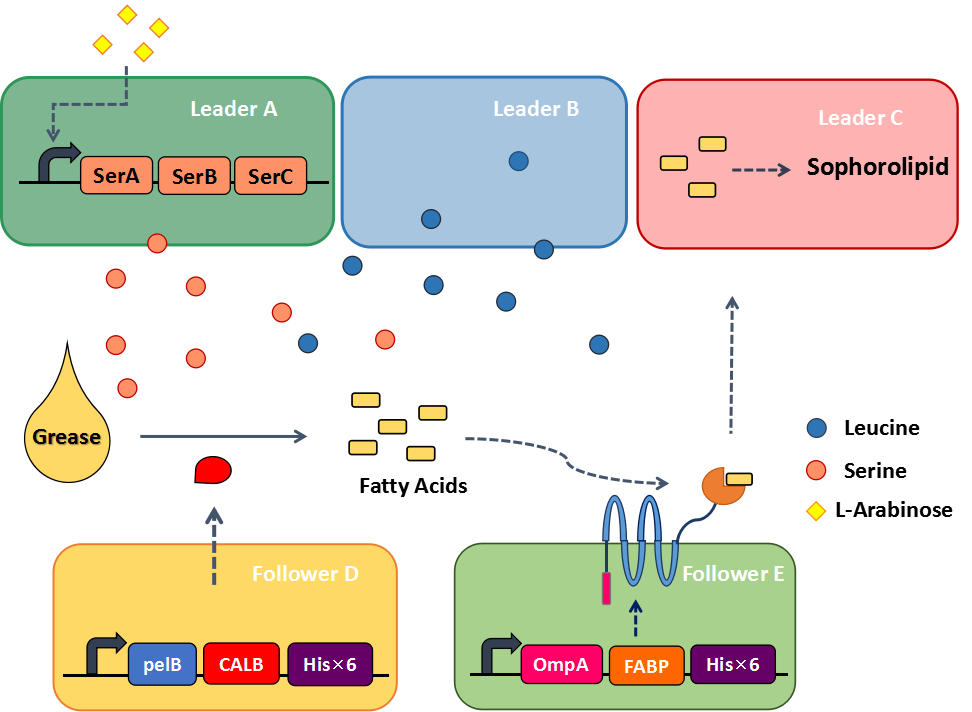 Figure 9. The overall working model of Leaders and Followers in our designed system

In this project, Leaders play a role of a center for command and reaction, and Followers act as substrate catchers or collectors. We constructed Leader A, Follower D and Follower E successfully, and obtained Leader B and Leader C commercially. After that, we verified the function of each part of our system and got the results as we expected. Leader A can secrete serine; Leader B can secrete leucine; and Leader C metabolizes fatty acid into sophora. As for Followers, we demonstrated that Follower D synthesizes active lipase CALB and transports it extracellularly, which can convert fat into fatty acids. Follower E synthesizes FABP and anchors it on the outer membrane, which can decrease levels of free fatty acids by effectively binding to them. In summary, we proposed and preliminarily developed a novel grease-degrading system consisting of differentially engineered microbial groups, resembling an assembly line in a human society.

In summary, we proposed and preliminarily developed a novel grease-degrading system consisting of differentially engineered microbial groups, resembling an assembly line in a human society.

It is known that a chemical or enzymatic reaction has a reactivity limit; at a very low concentration of substrate, high efficiency of reaction with sufficient fat for thorough degradation will be difficult to be achieved. Our system is aimed to resolve this problem in an innovative way. In an environment with very low levels of substrate, Followers can be spread out to catch these molecules and then be attracted back to form a niche with enriched substrate around Leaders, so that the reaction can be processed more efficiently.

This system can be used not only in sewage treatment, but also in other applications, such as factories, biomass power stations and so on. In other applications, only Leader C or Followers need to be accordingly modified. In our project, alternative enzymes can be used for the production of other end products. For example, if we make Leader C as bacteria expressing FadD (Acyl-CoA synthase) and ArcI (Fatty Acyl-CoA reductase), the system will have the function of transforming fatty acids into fatty alcohol. Therefore, this case provides a novel insight of enriching various substances into a microenvironment; thus, we believe our model has a broad prospect.