Antimicrobial resistance (AMR) is responsible for more than 700,000 deaths each year, with this number predicted to rise up to 10 million per year by 2050 (O’Neill, 2014). Whereas conventional antibiotics proved not to be the long-lasting solution due to the appearance of resistance, the combination of synthetic biology and phages represent an intriguing opportunity. Phages are the natural predators of bacteria and have always co-existed with their prey - suggesting that once the bacteria mutate and become resistant to the phage, the phage mutate as well.

PhagED is based on work by Yosef et al. (2015). They engineered lysogenic bacteriophages to deliver CRISPR-Cas3 systems which eliminated antibiotic resistant plasmids. The system simultaneously provided resistance against engineered lytic bacteriophages administered after lysogenic infection. The re-sensitised bacteria therefore have a survival advantage over the resistant bacteria to lytic phages, ensuring that lysogenic phage resistance would not arise. In this way, antibiotics to which resistance has previously developed can be re-used. We made this work more modular by adding restriction sites around spacers and repeats on the lysogenic phagemid. Thus, any sequence could be swapped in, reprogramming CRISPR endonucleases to target new resistant genes. We used new phages, P1 and T4, and CRISPR proteins, Cpf1 and SaCas9, aiming to demonstrate different systems can produce unanimous results (Figure 1). We improved the design further by planning to deliver the phages in a single application as a powder. Lytic phages will be encapsulated with water-degradable materials, and nutrients added to ease lysogenic phage infection. This will be integrated with the already-existing procedures. 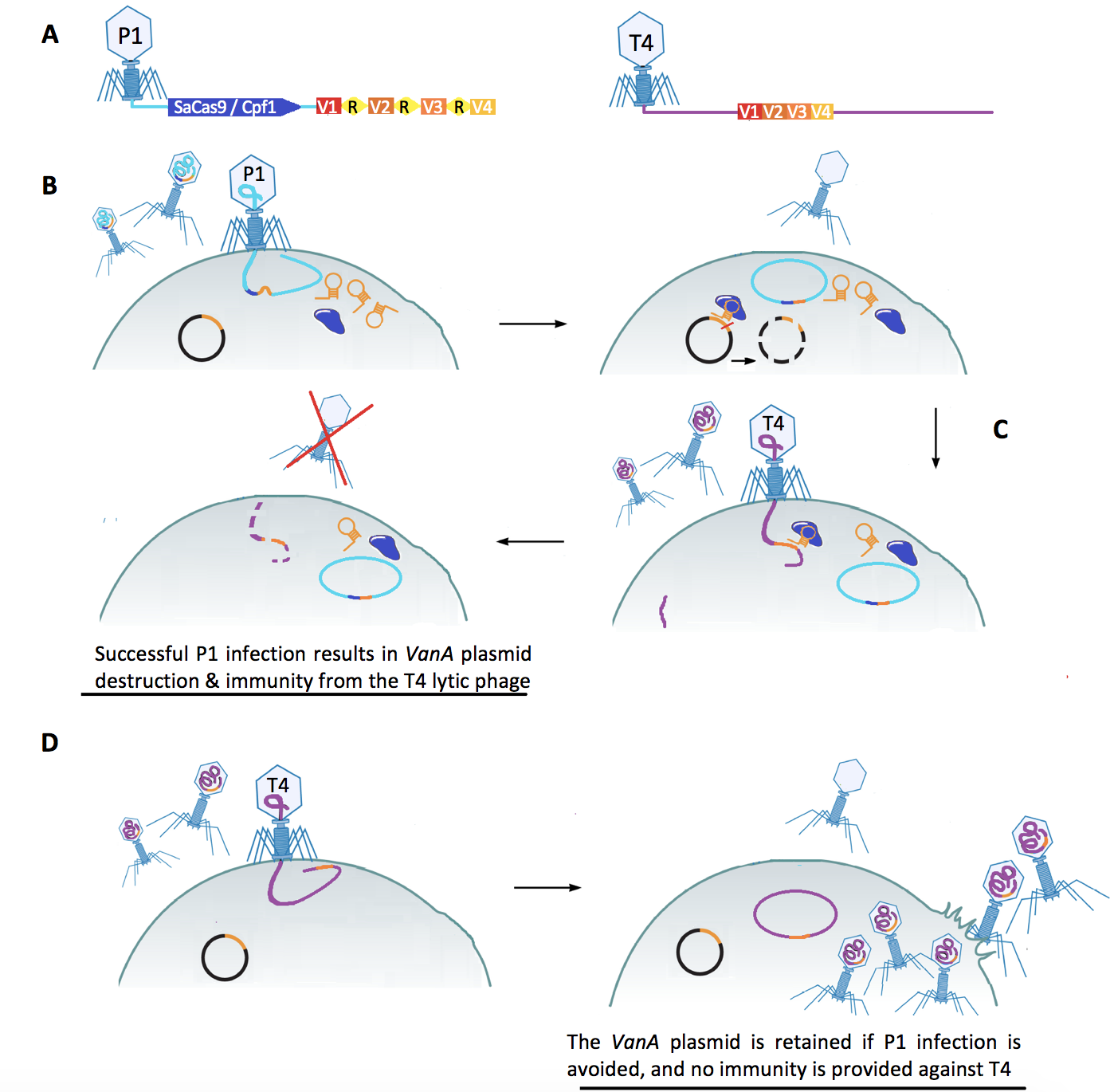 Improvement to the delivery system design

The biggest weakness of the system is that two applications of phage are required, which makes it too time-consuming for potential users. Yosef et al. suggested using this system as a disinfectant spray in hospitals, but this is also impractical as hospitals mostly use outsourced disposable kits made sterile by autoclaving - therefore any phages sprayed on before this process would be destroyed. Also, opening a kit up after autoclaving to spray it with phages would likely be viewed as too great a contamination risk. Furthermore, hospitals do not use sprays for cleaning surfaces. Instead they often use powdered chlorine and mix it with water.

After learning this, we changed the plan for how to deliver PhagED. Instead of incorporating it into a spray, we would produce a powder which will contain a mix of lysogenic and lytic phages (Figure 2). The lytic phages would be encapsulated within a material which would be degraded upon contain with water, in a similar way to how sugar coats pills. This would provide a time delay for the lysogenic phages to first infect any bacteria they come into contact with. Once the material encapsulating the phage has dissolved, the lytic phages will be released. This could be incorporated into the chlorine powder currently used. One study has already demonstrated a mix of lytic phages and chlorine is more effective at removing biofilms than chlorine or phages alone (Zhang, 2013). Therefore PhagED would take this one step further - the lysogenic phages would re-sensitise some bacteria to antibiotics and the lytic phages will contribute to breaking down biofilms with chlorine. 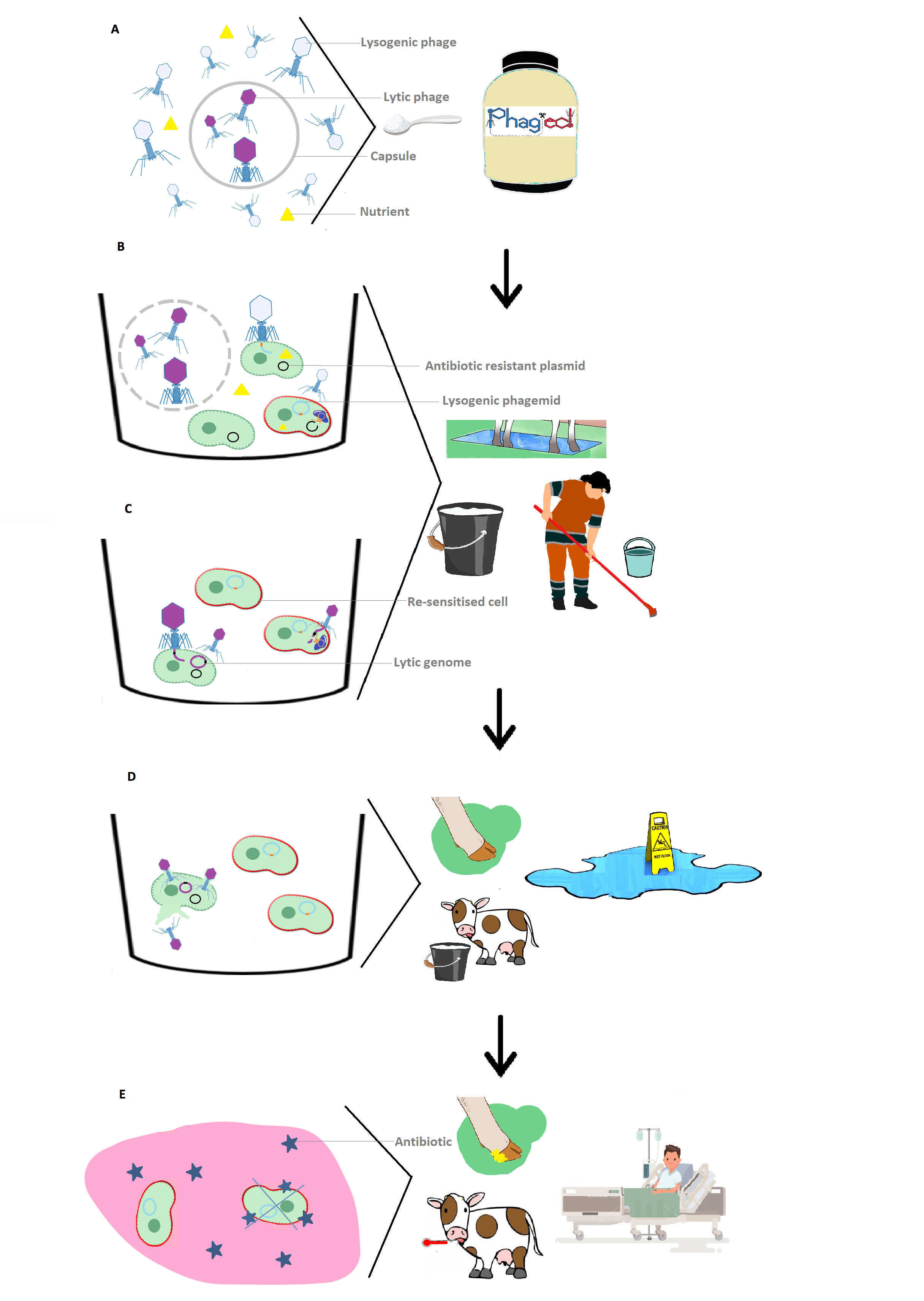 Figure 2: Overview of how PhagED can be applied to real world applications. A: PhagED will exist as a powder, containing encapsulated engineered lytic phages, lysogenic phages and nutrients. B: PhagED can then be added to a variety of applications, such as antiseptic foot baths, antibiotic contaminated milk, or water / chlorine mixes for cleaning. After PhagED is introduced, the Lysogenic phages seek bacteria present and inject their phagemids into cells, CRISPR-Cas/Cpf1 complexes (orange hairpin and blue protein) then form and cleave the antibiotic resistant plasmid. Meanwhile the material encapsulating the lytic phages begins to dissolve. Cells encircled in red have working CRISPR-Cas/Cpf1 CRISPR systems, their plasmid has degraded - making them re-sensitized to antibiotics and immune to Lytic phage infection. C: The Lytic phages are free and start infecting the bacteria. The cells containing the Lysogenic phagemid cleave Lytic DNA at the site where the spacers for the resistant gene has been placed, and therefore survive infection as the Lytic genome is degraded. Cells which still retain their resistant plasmid due to avoiding Lysogenic phage infection are successfully infected with the Lytic phage. Therefore the calf can drink the milk, the animal can get out of the footbath and the bacteria on the floor become re- sensitised. D: The antibiotic resistant bacteria begin to lyse, resulting in the only remaining bacteria on the foot / in the milk / on the floor susceptible to antibiotics. E: If infection does occur, it can be quickly treated with an antibiotic - the same antibiotic the bacteria were originally resistant to!

Another way in which the two-phage system could be delivered which was not proposed by Yosef et al. was the potential for it to be incorporated into agricultural practices. An astounding 80% of antibiotics bought in America are used on livestock (Bartlett 2013). By discussing PhagED with a vet and a farmer we also realised a spray was not a practical method for delivering the system. They argued their equipment was often not where the issue of antibiotic resistance arose. Instead, it was brought in by the animal from their bedding or the field. Antibiotics are also introduced in animal feed. For example when cows are given antibiotics their milk cannot be sold for consumption as the drugs will be present in the milk. Vets encourage farmers to throw the milk away. However, many farmers feed it to their calves in order to reduce wastage. This means calves become living vessels for bacteria to be exposed to antibiotics and gain resistance. Pigs and chickens are also given antibiotics with their feed, producing ‘antibiotic broths’ as described by the vet.

This knowledge made us re-evaluate the potential applications for using PhagED on farms. As a powder, PhagED could be easily added to milk and animal feed. Again the lytic phages would be encapsulated to activate after lysogenic infection within the foodstuff. This would provide a economic benefit to farmers in terms of milk wastage - whilst appeasing the vets. PhagED could also be easily integrated with other antibiotic treatments used on farms. For example it could be added as a powder to teats prior to milking, as all teats get cleaned before this process. PhagED could be added to footbaths (often laced with antibiotics) that the animals walk through to deter foot infections. We could also see potential for PhagED to be added to pre-antibiotic treatments for preparing cow’s udders to be milk free before giving birth - an area which often gets infected.

We also developed a model to evaluate the effectiveness of PhagED. We wanted to investigate the ratio of re-sensitised bacteria against the bacteria which evade the lysogenic infection, and the number of bacteria which would be killed after lytic phage exposure. One interesting discovery from producing this model is the requirement for extra nutrients to encourage successful lysogenic infection. Without nutrients available, lysogenic infection does not occur fast enough and the lytic phage destroys all the bacteria. This is undesirable as not enough bacteria would get re-sensitised, and resistance would quickly appear against the lytic phage. To prevent this from occurring we have decided to put nutrients into the powder.

Why is PhagED better than alternatives?

Bacteriophages are also incredibly cheap and easy to produce, making this a better alternative than other methods being developed - such as antimicrobial proteins, for example lysins, peptides and antibodies (Figure 3). Protein extraction is expensive and requires cells to grow sub-optimally to produce large quantities. In contrast, bacteriophage production is a slick process - honed by millions of years of evolution. Therefore once the initial phage engineering is completed, PhagED would be relatively simple to up-scale.

PhagED is also better than conventional phage therapy. This is because phage therapy has the same fundamental issue of antibiotics - if bacteria are exposed to a large number or lytic or even CRISPR-cas engineered lysogenic phages, resistance will rapidly arise. This is because there is a huge selection pressure for phage-resistant bacteria to be selected for under a phage onslaught. PhagED instead provides a temporary survival advantage for the bacteria re-sensitized to antibiotics over resistant bacteria, which makes the system easily maintainable. Furthermore, to evade the system completely bacteria will have to be resistant to two type of phages, which is very unlikely. We would also plan to use a mix of different bacteriophages targeting different genes, making it virtually impossible for resistance to PhagED to arise. 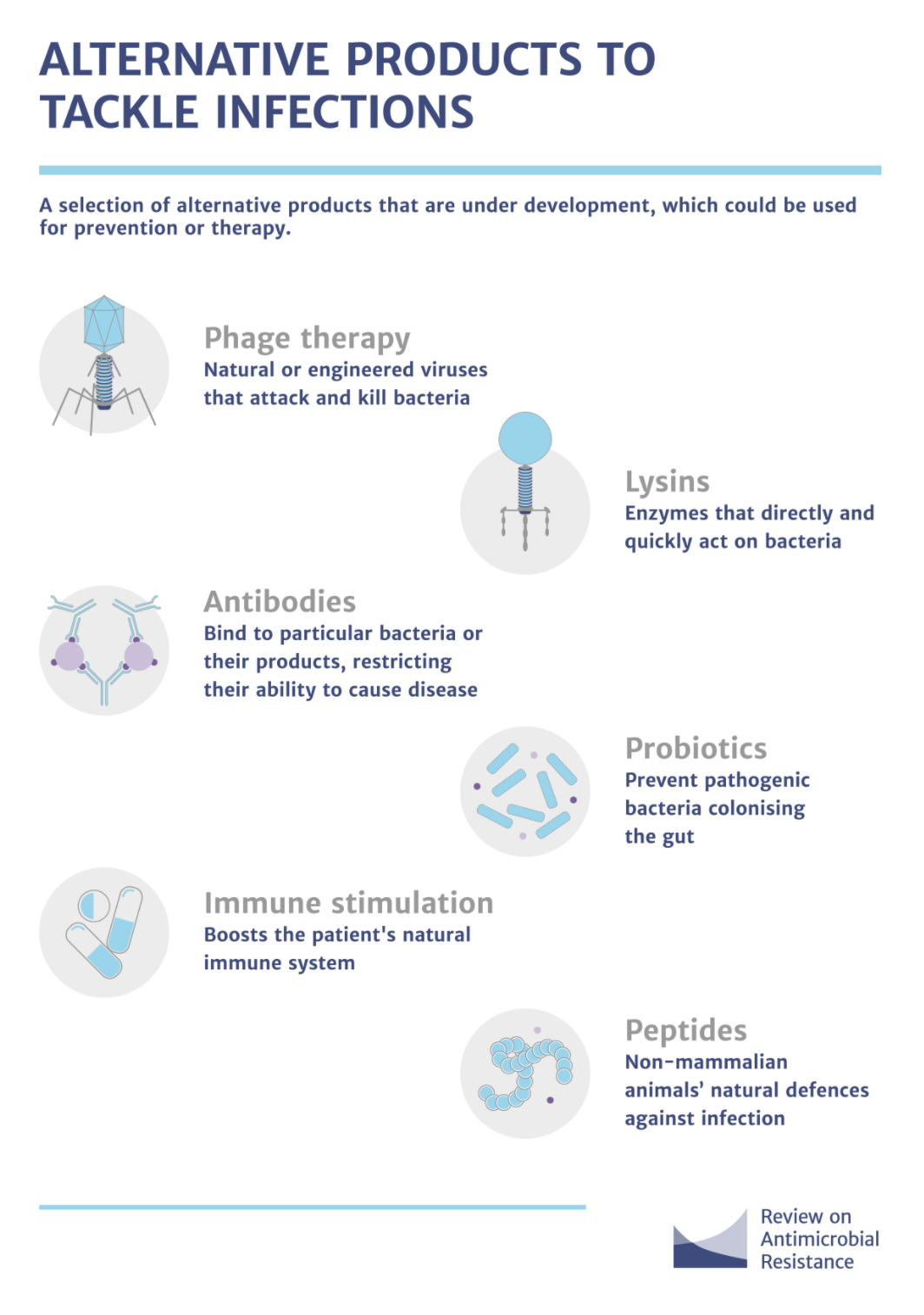 Figure 3: An example of the alternative methods being developed in antibiotic resistant. Originally from O’Neill (2014).

Our human practices and model work has drastically changed the applied design of our project. PhagED delivery has transformed from an abstract ‘spray’ to be vaguely used for ‘sterilization’ into a powder with encapsulated lytic phages and added nutrients. PhagED in powder form is extremely flexible - it can be used for sterilizing surfaces with chlorine in hospitals, as a food supplement in agriculture, and incorporated into antibiotic treatments for farm animals. We also predict resistance to PhagED would be much reduced compared to other alternative treatments to antibiotic resistance, and much cheaper and easier to use. The use of PhagED therefore has far-reaching applications. We strongly believe it could be a game changer in the face of the upcoming post-antibiotic era.

Yosef, M. Manor, R. Kiro, U. Qimron, Temperate and lytic bacteriophages programmed to sensitize and kill antibiotic-resistant bacteria. Proceedings of the National Academy of Sciences of the United States of America 112, 7267-7272