Safety was one of our top priorities during the design and implementation of our project. Our plan went through several iterations to ensure it met iGEM, university and national safety standards.

When we first started thinking about our project, we had grand plans to carry out our initial experiments in E. coli before completing proof-of-concept in the ESKAPE pathogens themselves. We soon realised that working with these pathogens was unwise from a safety standpoint, and was not permitted by either iGEM and University of Edinburgh safety guidelines, so we altered our plan and developed new experiments so that all proof-of-concept work could be carried out in non-pathogenic E. coli. We liaised with the University of Edinburgh Biological Safety Committee to create a safe system that would allow us to achieve our goals.

Our first plan for the E. coli system was to use promoter-less resistance genes. Through discussions with the safety committee we realised that the risks of expression due to cryptic promoters or spread through horizontal gene transfer were not insignificant. We altered the design of our system to ensure that no functional resistance gene products would be expressed by using short “chunks” of the gene, rather than the full sequence.

Figure 1: Structure of the protospacer DNA system, showing the 4 protospacer chunks (purple, labelled “P”) separated by linkers. This sequence was combined with the GFP system in Figure 2 using MoClo.

Figure 2: Structure of the GFP system, showing the double terminators used to ensure a complete halting of translation at the desired point. This sequence was combined with the protospacer system in Figure 1 using MoClo.

The protospacer regions were chosen carefully so as to avoid any active sites that could confer antibiotic resistance to the chassis E. coli, while also maintaining a high level of sequence conservation so that in future this system can be applied to a range of species that possess each gene. The gene regions were placed in a different order than that in which they would be found in a natural system (e.g. 4 2 3 1) to further minimise the chances of any functional protein being formed. The GFP sequence was followed by two terminators (T1 and His terminators from E. coli) to ensure complete halting of translation at the desired point. These were then ligated together in one vector using MoClo assembly (Figure 3). 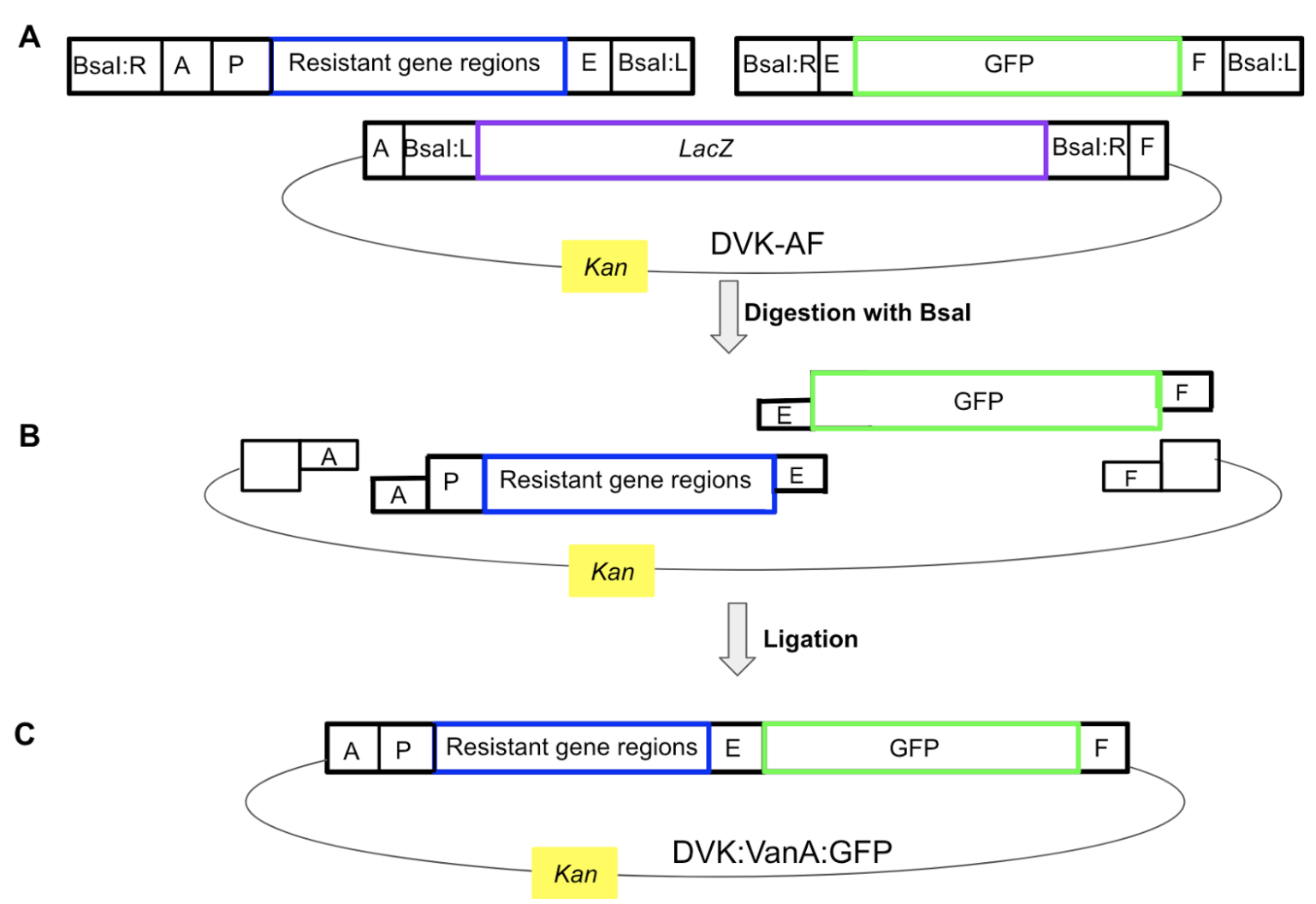 Figure 3: Overview of MoClo assembly with the construct containing the resistant gene regions and construct for GFP being inserted into a DVK-AF plasmid. A: Displays construct assembly, BsaI:R indicates the enzyme will cut to the right, BsaI:L indicates it will cut to the left. A, E and F = MoClo fusion sites. B: Overview of each construct and DVK-AF once it has been cut by BsaI. C: After ligation DVK will contain VanA fused to GFP.

Risk assessment forms were filled in and signed by each team member to ensure that we were all aware of any safety precautions necessary for our reagents, equipment, and organisms.

We used several non-pathogenic E. coli strains as chassis - TOP10, DH5ɑ, C600, RecD-, and BL21 DE3. These strains are not harmful to humans, and were worked on inside a class 1 laboratory following standard laboratory safety procedures. Plates containing E. coli were sealed with parafilm prior to storage at 4°C. Once no longer required, plates were destroyed by autoclaving. All culture waste was treated with Virkon prior to autoclaving.

We also used several strains of bacteriophages as chassis during our project - P1, λ, and T4. All the work with phages was carried out in a class 2 cabinet, housed in a class 1 laboratory separate to the rest of our work. Phages were not removed from this lab, and all equipment was sterilised by ethanol/autoclaving before being moved out of the lab.

In the preparation phase of our project we took into account the hurdles and difficulties of working with phages. Despite phages seeming easy to work with, most labs are not equipped to work with them. Bacteriophages do not infect human cells, and the strains that we used were specific to E. coli. While this meant that they did not pose a threat to us, there was still a risk of contaminating the laboratory and unintentionally killing E. coli that other researchers were using/storing. As part of scientific and responsible community, we took extra care while working with phages trying to keep the working benches sterile and avoid any contamination.

Chloroform was used in phage purification procedures. All chloroform work was carried out in the fume hood.

Lab coats and gloves were worn at all times during the lab. Face masks were worn when working with powdered reagents such as kanamycin. Long hair was tied back, and closed-toe shoes were worn in the lab. Where cultures/reagents had to be transported between buildings, they were carried in sealed containers. Protective gloves were worn when handling hot glassware. PPE was removed and hands were thoroughly washed prior to exiting the lab.

While shipping our biobricks we encountered some issues. Despite having only a few biobricks, it took us three attempts to ship them! The first plate was sent by us and received by iGEM before the deadline but a miscommunication with our store - the import/export centre of the University of Edinburgh - resulted in the parcel being labelled as the store normally does instead of according to iGEM regulations. We sent the same biobricks again in a new plate. This time, we correctly gave the shipping address and information to the store but the store did not include the complete label requested by iGEM. Finally, the third parcel was sent and properly labelled.