This year the iGEM Edinburgh_OG team improved the BBa_K191006 part to fulfil the gold medal criteria.

A core principle of the Biobrick foundation is to bring standardisation in a field that is constantly changing and evolving. Standardising biological parts and their assembly allows for projects to focus less on assembly of genetic constructs and more on design and testing.

LovTAP is a DNA binding fusion protein between a Light-oxygen-voltage-sensing (LOV2) domain from Avena sativa and tryptophan repressor (TrpR) common in E. coli developed and improved in 2008[1],[2]. The LovTAP fusion protein was initially submitted to the registry by the École Polytechnique Fédérale de Lausanne 2009 iGEM team[3]. The LovTAP fusion protein acts as a photoswitch allowing selective DNA binding through the TrpR domain regulated by the asLOV2 domain. The asLOV2 domain sensitive to photoexitation at 470 nm exists in two conformational; a dark state and light state. Photoexcitation at 470 nm of the LOV domain results in the conformational change of the trpR domain allowing DNA binding, DNA disassociation occurs when the LOV domain returns to the inactive dark state causing the conformation to revert. 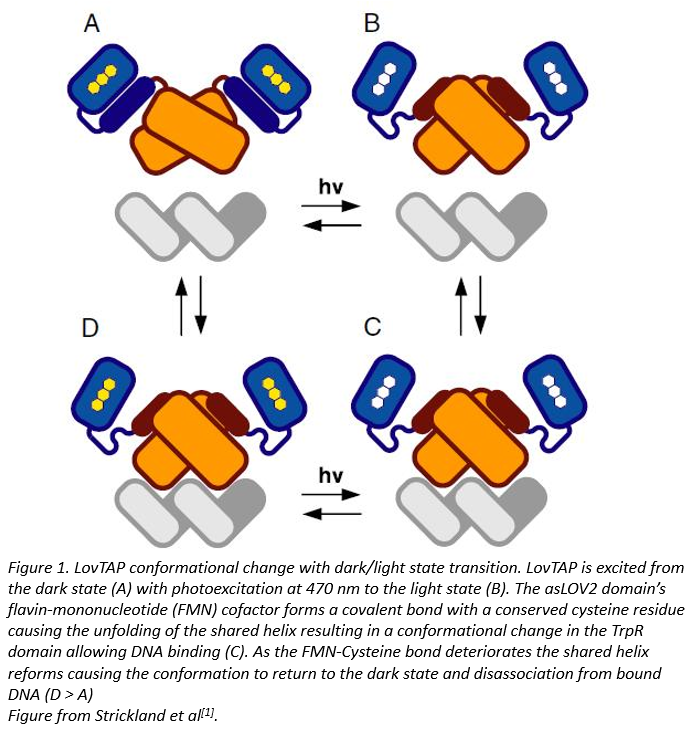 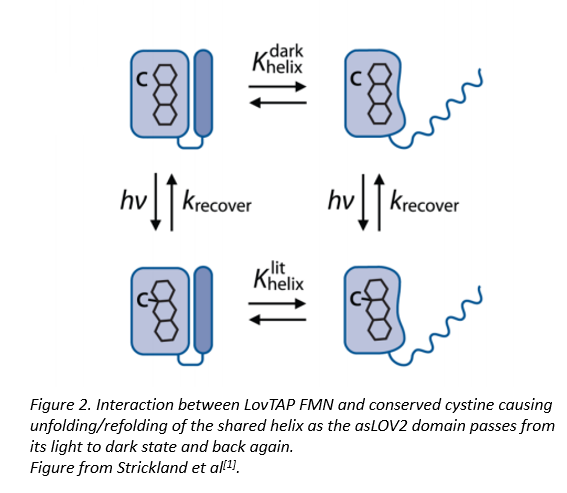 The original Biobrick BBa_K191006 is only compatible with a single assembly method (RFC 21), limiting availability on the registry and hence hindering further future work. Redesigning of the original brick and optimising the coding sequence for the iGEM registry would result in extended compatibility, facilitating future work and characterisation. Our aim is to create a variation of the original Biobrick completely compatible with all iGEM assembly standards without resulting in loss of function.

The optimised biobrick BBa_K2330002 was initially tested by ligation into plasmid backbone pSB1C3 assembled through the RFC10 standard. Successful ligation was determined through colony PCR. Previous work on the origional LovTAP part indicated that LovTAP under a lacl operator was highly expressed even without IPTG induction. To test experimental activity, the optimised Biobrick was assembled into a low copy number plasmid pSB3K5 in an attempt to control overexpression and reduce the impact the 'leakyness' of the lacl operator had on the system.

The system was tested in the composite part under the lacl promotor BBa_K2330001 with the same composite reporter N.o 2 both described by iGEM09 EPF Lausanne team BBa_K191005, an inverted RFP reporter induced by the double repression of the TrpR and TetR promotors. Under this system LovTAP activity can be directly associated with RFP expression. The reporter construct was ligated into a higher copy number plasmid pSB1C3 and a double transformation was carried out in DH5a cells. Successful transformants were screened using Kanamycin and Chloramphenicol antibiotics. Previous work shows that when colonies containing the reporter construct are grown in LB medium there is very little response to the addition of tryptophan, suggesting the reporter is already saturated with tryptophan from the medium. In an attempt to combat this cells were grown initially in LB, pelleted by centrifucation and resuspended in amino acid supplemented M9 minimal media and incubated for an hour prior to testing. To aid cell growth glucose was used for the mediums carbon source in lieu of glycerol.

Cell cultures were tested for the effect exposure to 470 nm light in addition to the effect exposure to IPTG and tryptophan had on RFP expression and LovTAP activity. The following test conditions were carried out in quadruplicate analysed over a 16 hour period using an orbital shaking plate reader incubated at 37 Celsius.

To reduce unwanted interference from tryptophan in the growth medium and lacl promotor 'leak' the assessment medium was swapped for M9, and LovTAP was ligated into a low-medium low copy number plasmid to control LovTAP over expression. The induction and activation of the LovTAP system (exposure to blue light and addition of IPTG) should have a similar effect as addition of tryptophan on the readout of the reporter system. Whereas little to no activity is expected in samples not exposed to blue light or lacking IPTG. 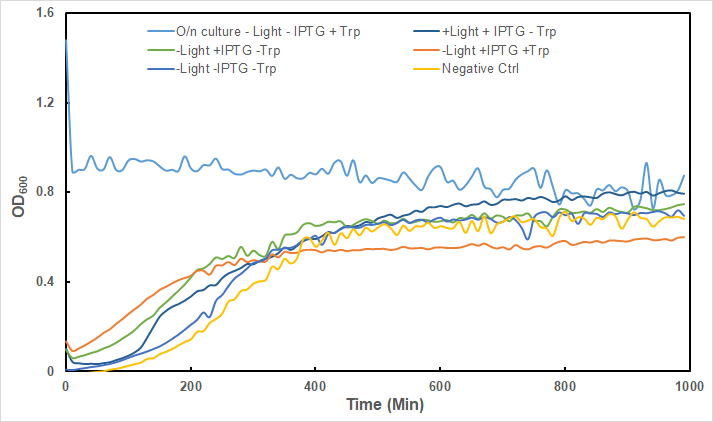 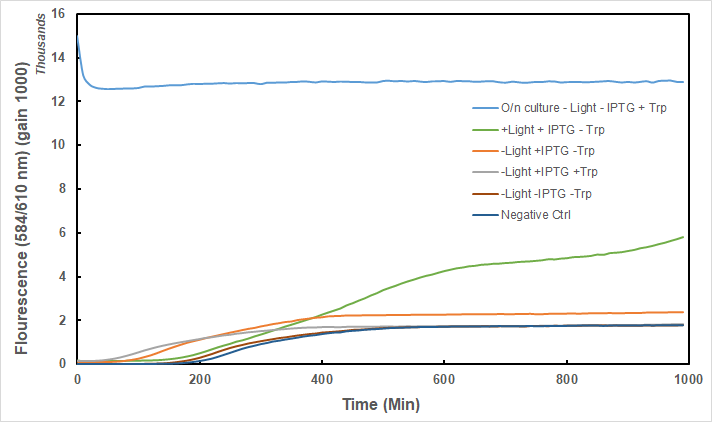 From these results we can see optimised LovTAP is active and has a definite effect on RFP expression when induced with IPTG and activated with blue light. We can also see a basal level of expression for other test conditions which appears slightly elevated for the sample with LovTAP induced but not activated. Indicating there is a basal level of activity for LovTAP when expressed. The sample where LovTAP was induced and also trptophan was added expected higher levels of expressed RFP were expected. This could indicate the colony had lost the LovTAP plasmid when resuspended in M9 media as no antibiotic selectors were used to prevent antibiotic preventing cell growth.