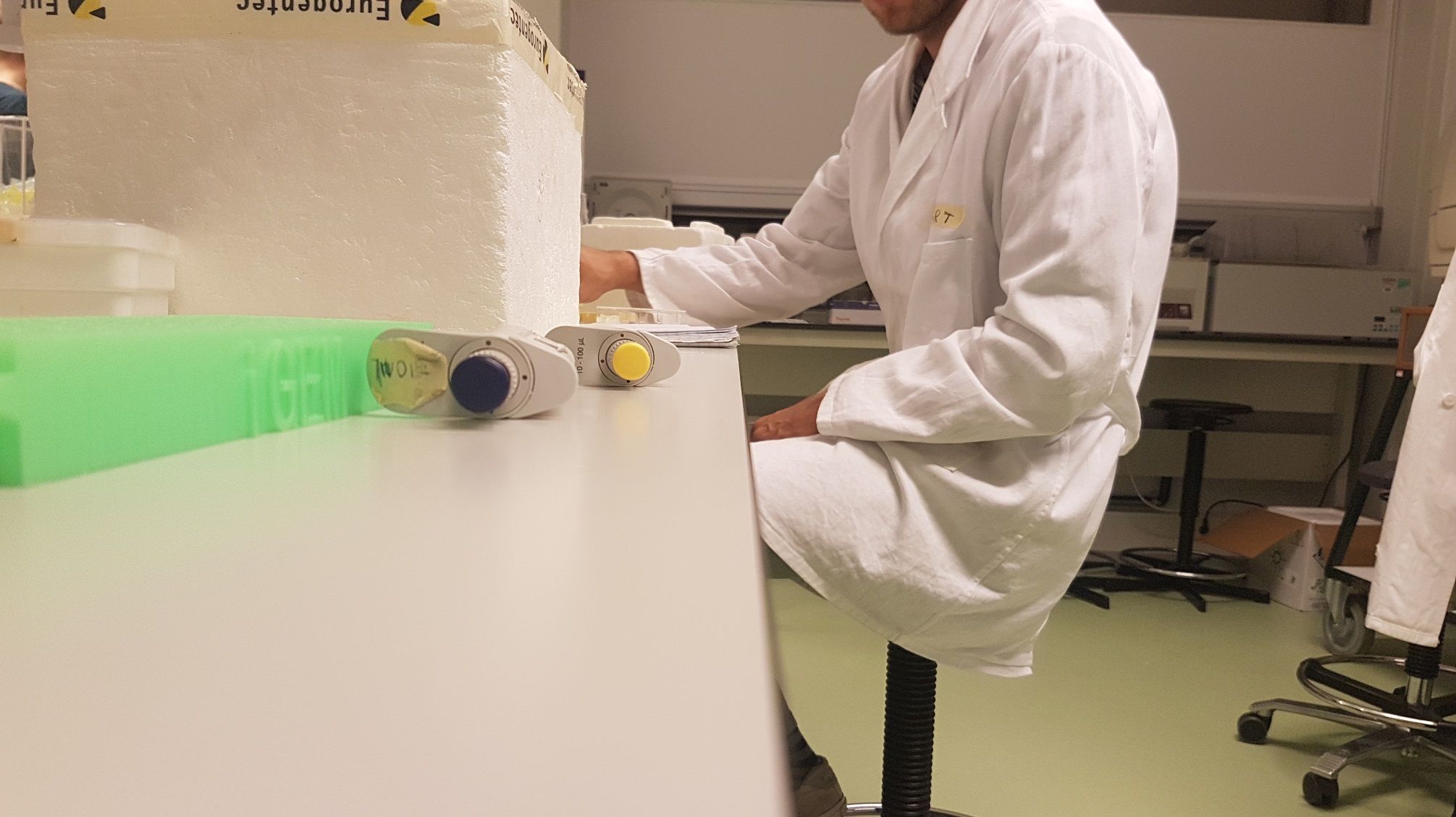 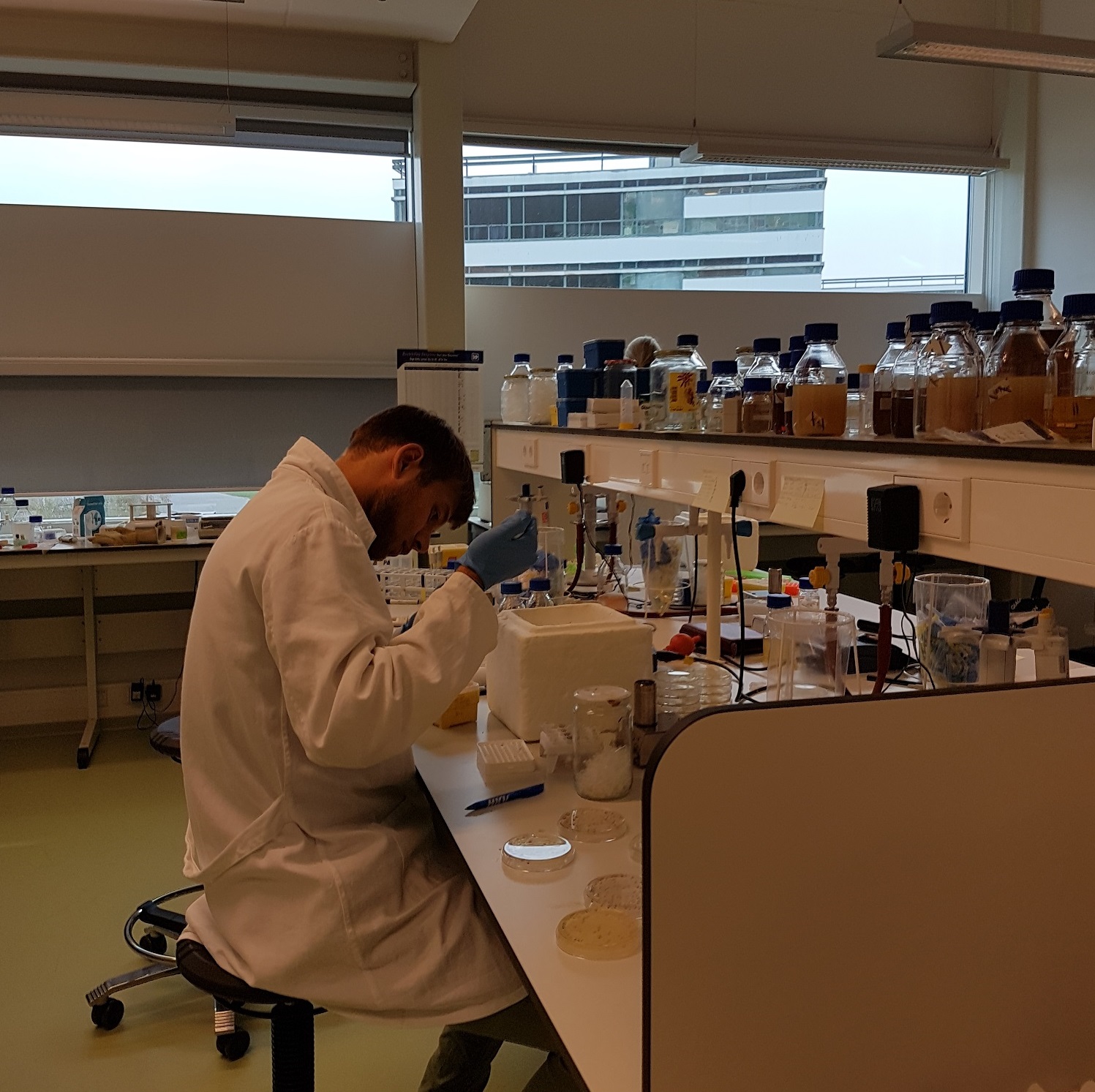 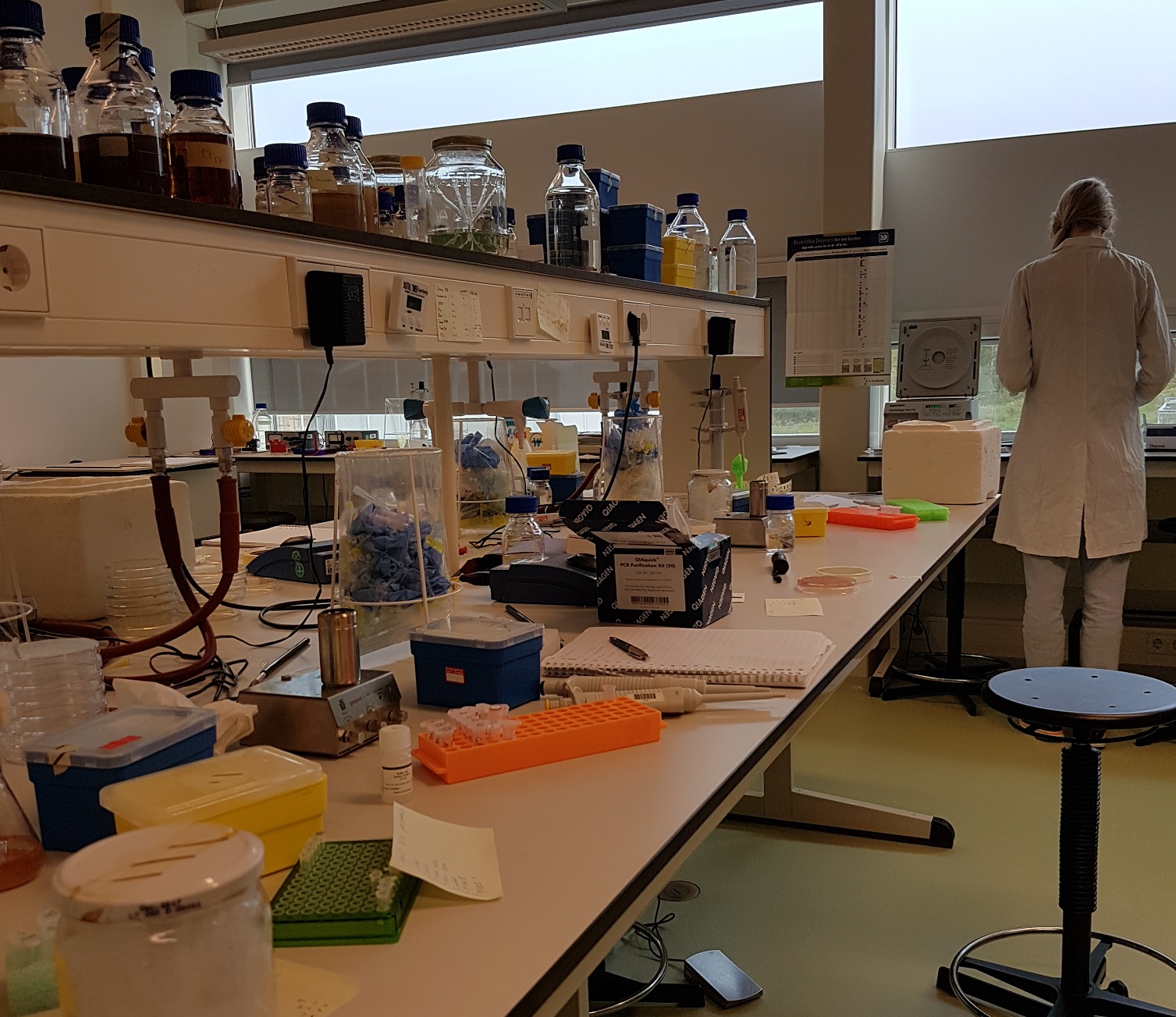 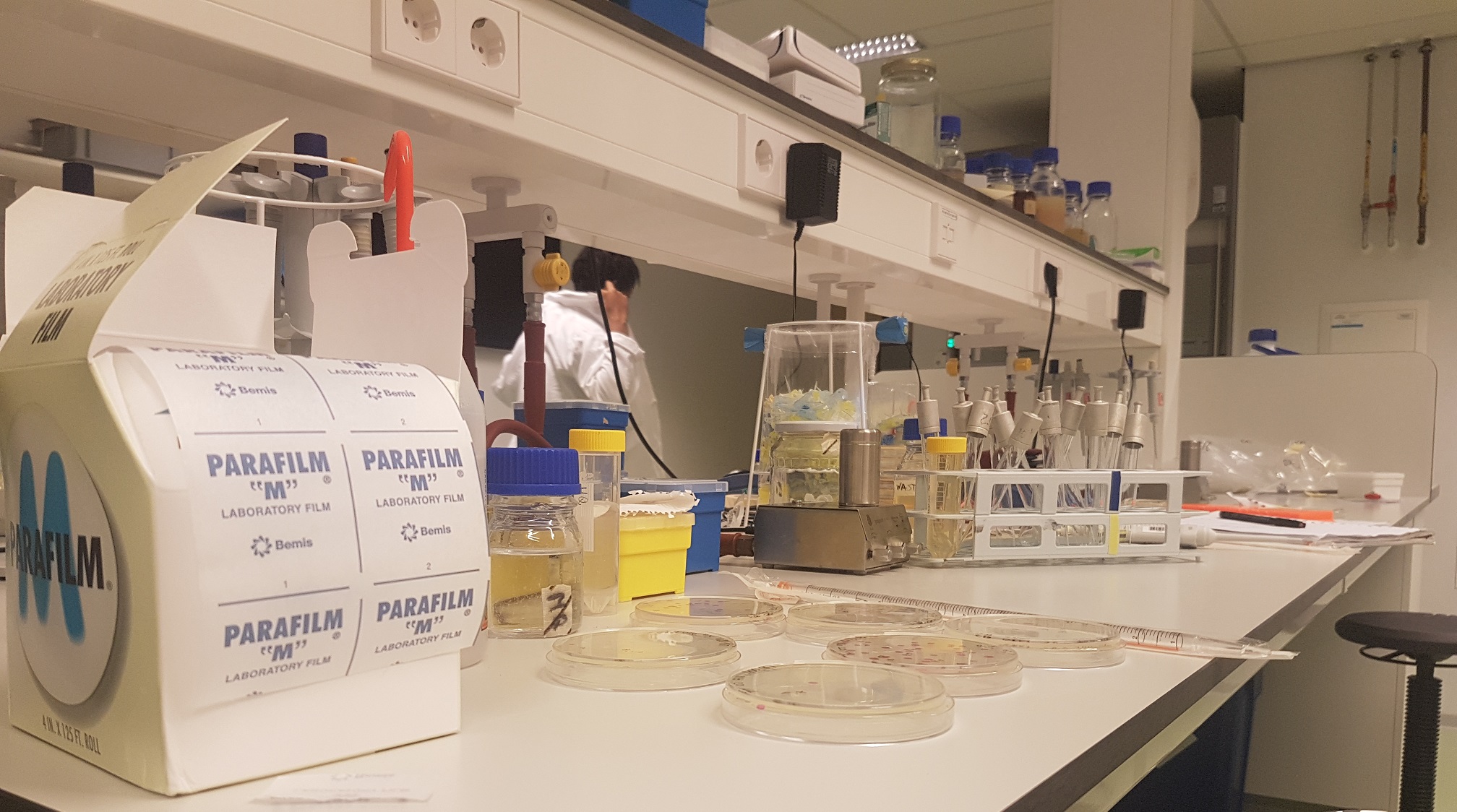 As it became apparent during our conversations with dairy companies that our product should be used on the factory work floor, we designed a cartridge that could be used easily and safely. Regarding legislation, this is still a problem as any company or lab using GMO's needs a special GMO permit throughout European countries. In most cases food industry companies we went to are very opposed to acquiring such permits for factories as the public image of GMO's is often considered dangerous, especially in the food industry.

The cartridge we designed to be very cheap to produce and very easy-to-use. It does not require extensive laboratory work nor would the person using it need much training. This has clear advantages compared to more demanding methods such as PCR analysis which requires a well-stocked lab with highly trained personnel.

Taking into account all our findings during our project we came up with two scenarios in which our detection device could be used.

As current regulation and perceptions regarding GMO use would prevent the use of our product in a dairy factory, we would like to propose the IMPACT truck, a mobile lab inside a van. The IMPACT truck is a lab on wheels. This lab meets all the safety regulations to be a biosafety level one lab (BSL1). In a BSL1 lab it is allowed to work with non-pathogenic micro-organisms such as Escherichia coli DH5α and Lactococcus lactis. All the equipment currently necessary in our design, such as a fluorescence detection, could be present as well. When our device would be further developed, such as the incorporation of a chromoprotein instead of GFP and RFP, this will not be a requirement anymore. All waste needs to be sterilized before it can leave the lab. The person working in the van needs to have a certificate, which states that he or she knows how to work safely with GMOs. A positive aspect of this lab on wheels is that the factories do not need to send their samples to a special facility. The truck drives by, the samples will be tested and the results will be quick and basically on-site. The main positive aspect is that the factory using this test does not need a permit for the use of GMOs. The company operating the IMPACT truck needs a permit and is responsible for the testing. This would solve the problem of having a public permit by the dairy company itself. 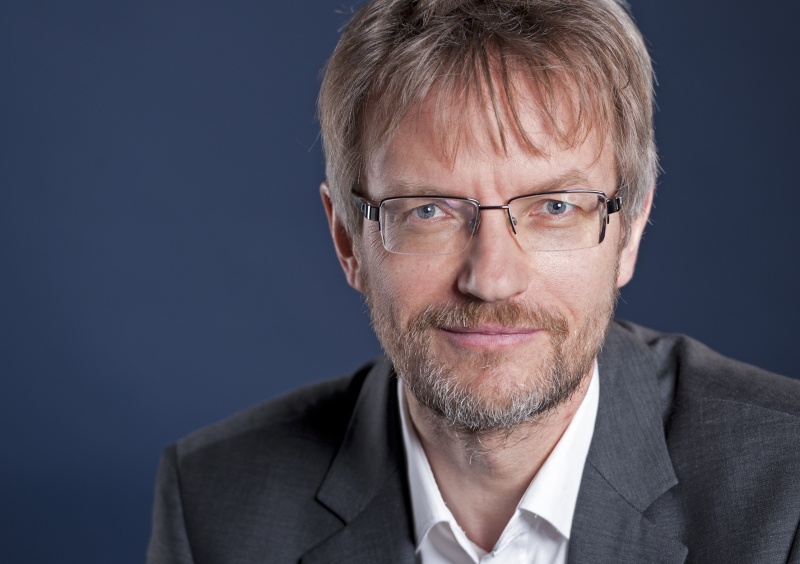 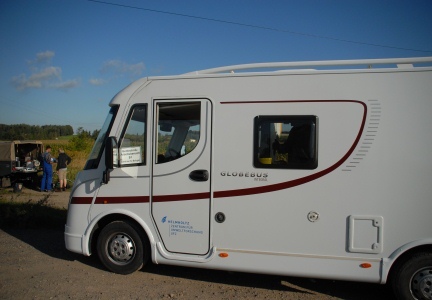 On Monday 23rd of October, we contacted Hauke Harms from ARSOlux. Previously we heard from Wouter Ghering that ARSOlux used a truck in which they could use their GMO arsenic biosensor. According to Auke the use of a truck as a mobile GMO lab was fairly easy to realize concerning legislation challenges. They bought a regular van, changed the inside to a lab including a special waste bin and made sure it was clear from the outside that it was a GMO lab. The difficulty in their own project was due to the costs of developing the product to market maturity. It was uncertain whether the product had any market value once it would be approved, especially since it targeted NGOs and other organisations not particularly known for their lavish financial spending. The project came to a halt due to this uncertainty, sponsors backed away. As most companies we contacted during our project were quite reluctant on using GMOs inside their factory, due to public permits, the use of a truck not associated with the factory seemed the perfect solution.

Future scenario where the use of GMOs is more accepted

During our meetings with multiple facilities of a big dairy operator in the Netherlands we learned that all bacteriophage testing is done in Leeuwarden for their factories in the Netherlands, Germany and Belgium. The milk samples need to be shipped from the factories all the way to the laboratory. From sending a sample to getting a result can take up to one week. As our detection cartridge is easy to use by any factory employee and easily disposable by the built-in hydrogen peroxide unit. This could save lots of time and money since samples do not have to be shipped over a long distance anymore. The factory will have results in a matter of hours instead of days or even a week. The fast and specific results will allow operators to more dynamically react to threads and efficiently implement countermeasures. Milk or whey samples can be taken whenever they deem it to be necessary and can immediately be tested. The results will give more insight into the fermentation process and associated phage occurrences. Hopefully, it will lead to lead to more efficient fermentation, saving materials and energy. This will be even more practical than when the factory that has to ‘wait’ on the IMPACT truck to come by.

Chr-Hansen and DSM told us that there is a need for a product which could be used on site. These companies offer bacteriophage testing as a service for their customers. If they could send a testing device to their customers instead, this could save time and money. Currently, this would not be possible to do with our device since a permit is necessary. Hopefully, in the future, these legislative hurdles will not exist anymore and the use of GMOs is more accepted, making this self-test feasible. We expect the laws to be different, which will make it easier to bring a product like ours on the market.