After discussing our project with family and friends, it became clear to us, that there are big gaps in the knowledge about what genetic engineering and synthetic biology really is. Especially, about the molecular backgrounds there is hardly any general knowledge. That is why we decided to organize a discussion evening on the topic "Perception of Genetic Engineering and Synthetic Biology in Public". In order to bring the background a little closer to the general public. Besides the discussion night, we also co-hosted the Nerd Nite, where we talked about the subjects mentioned above, with everyone who was interested in learning a little bit more about genetic engineering and synthetic biology or our project.

For support, we invited following experts:

Günter Getzinger studied chemical engineering at the Technical University of Graz, as well as philosophy at the Karl-Franzens Universtiy of Graz. He is working in the field of philosophy of technology, theoretical and practical aspects of sustainable technology design and technology assessment and product evaluation.

Schober Michael Maximilian studied medicine at Medical University of Graz and was working at ZMF (“Zentrum für molekulare Forschung”) in the field of diabetes research. Now, he is more focusing on working with biomarkers at CBmed.

Merle David Adrian studies medicine at Medical University of Graz and has a bachelor in molecular biology at the Karl-Franzens University of Graz. He is working at the CBmed, Customized Soutions for international Biomarker Research, a company working in the field of biomarker research to develop solutions and products for patient care and cure.

Tomislav Cernava, who did his bachelor in molecular biology and his master in biochemistry and molecular biomedicine at the Karl-Franzens University of Graz. For his PhD, he specialized deeper into the field of biotechnology at the Technical University of Graz, followed by his post-doc at ACIB and Roombiotic GmbH. Now, he is working at the institute for environmental biotechnology as an university assistant.

Martin Stefanec, who did his bachelor in biology and his master in behavioral physiology at the Karl-Franzens University of Graz. He is now working as a researcher in the field of algorithm development and implementation, as well as an experiment designer and modeler at ALL (Artificial Life Lab). 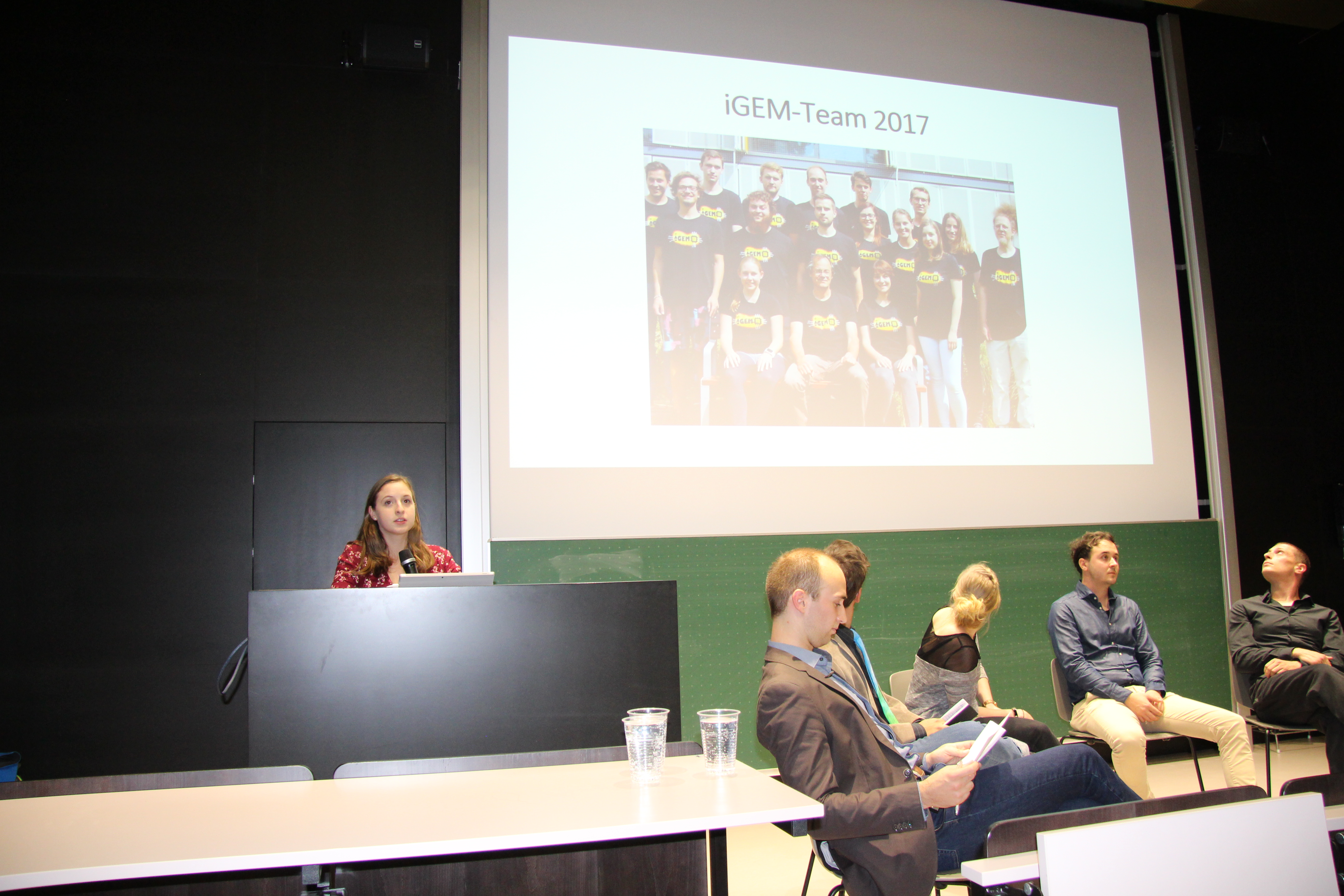 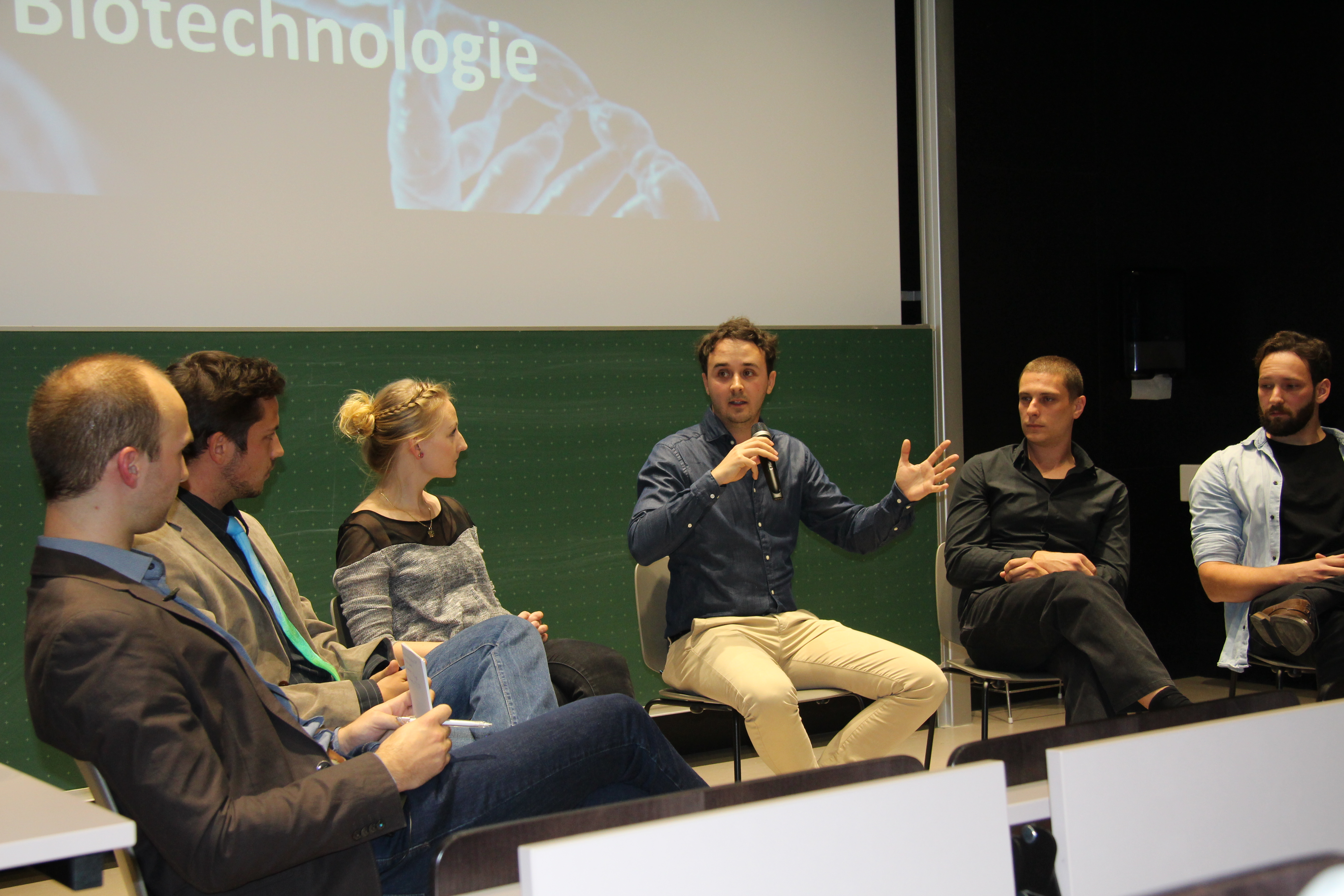 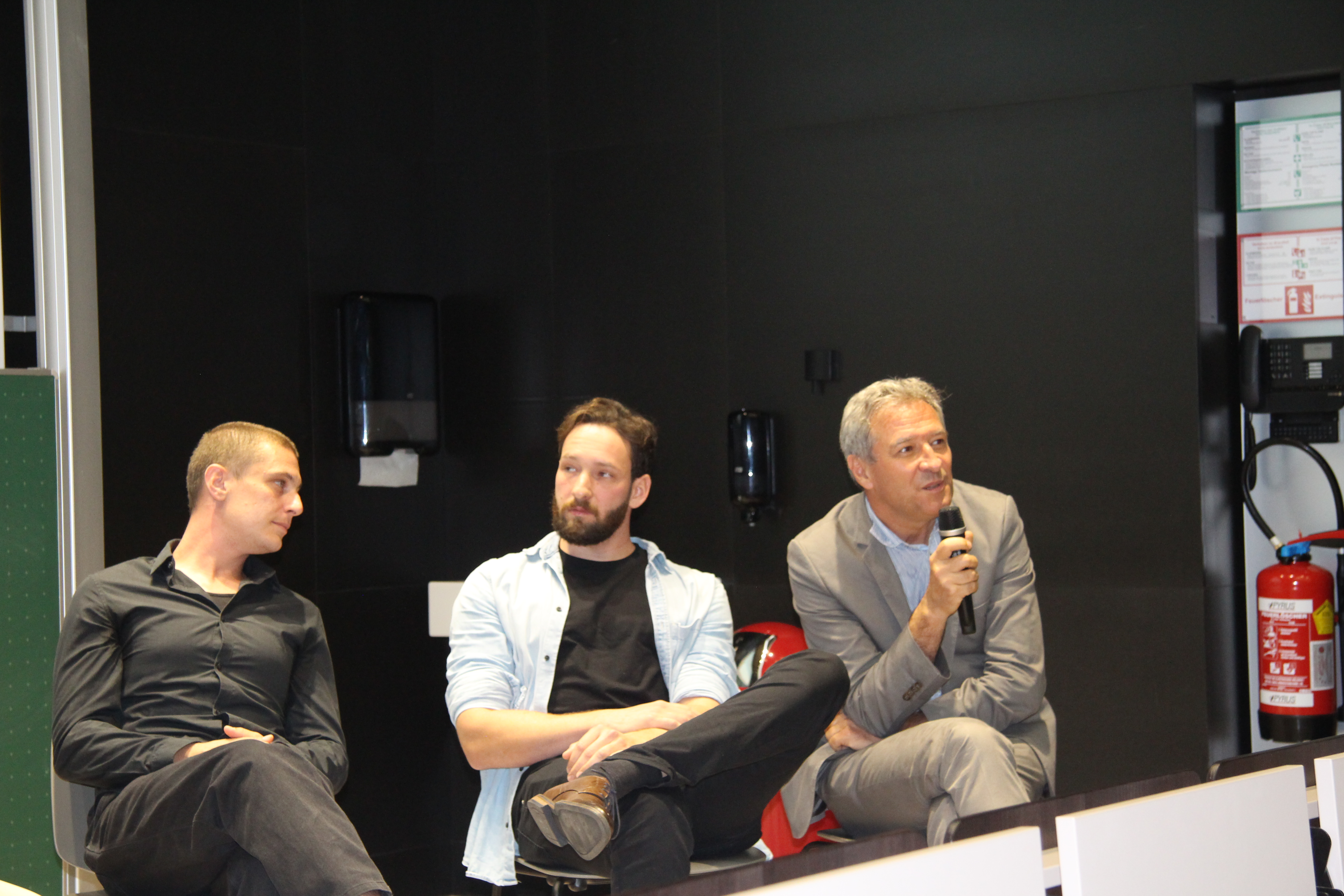 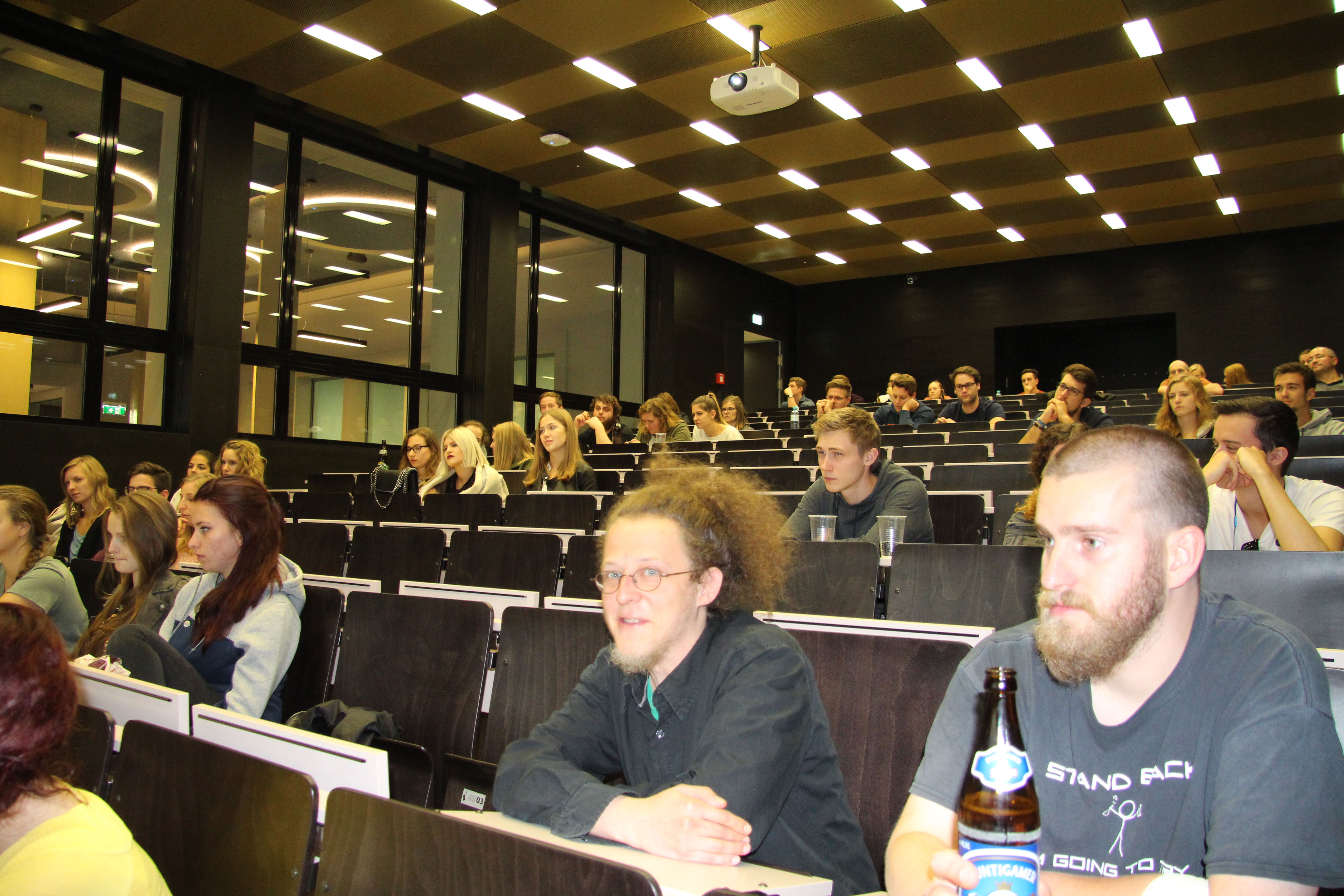 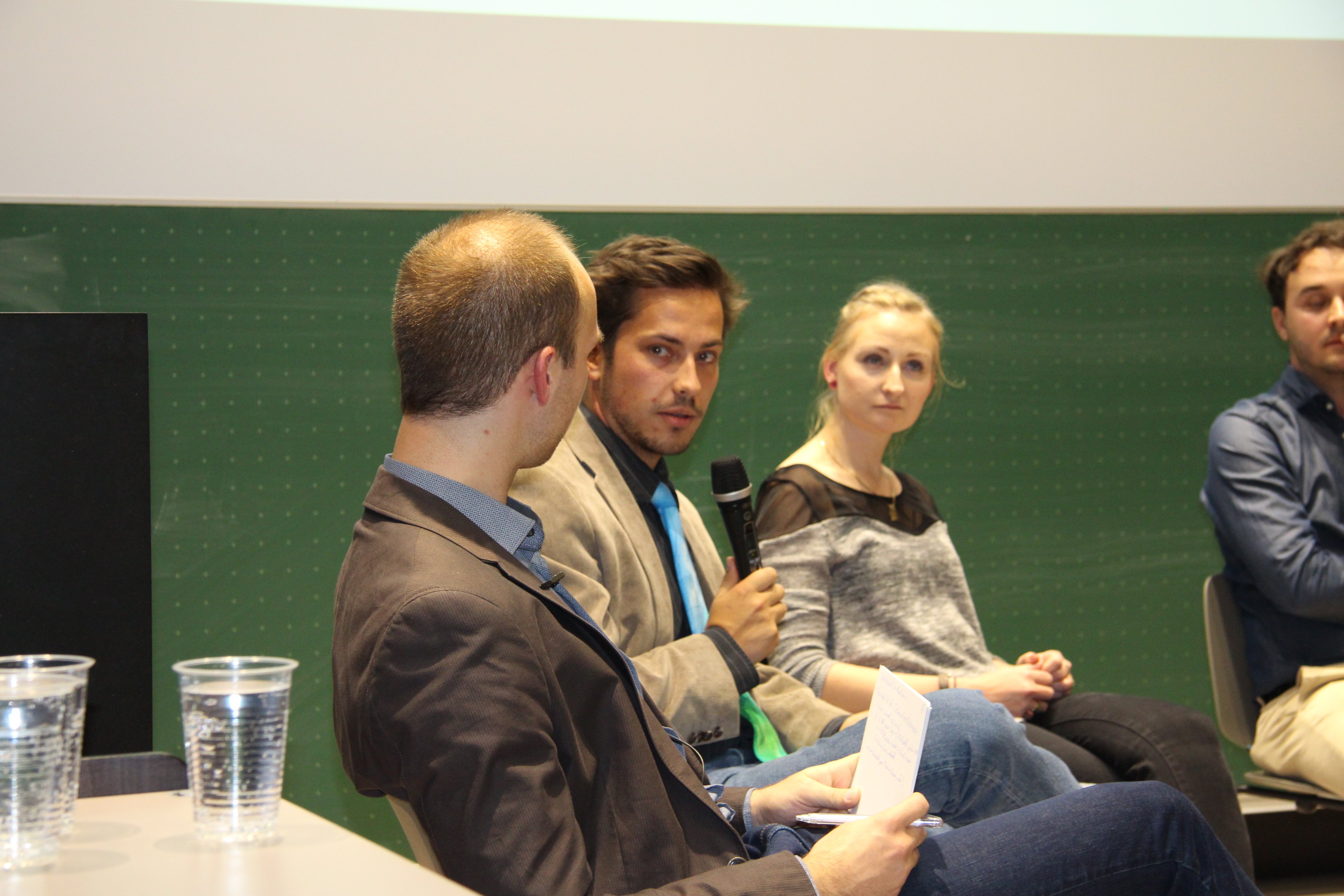 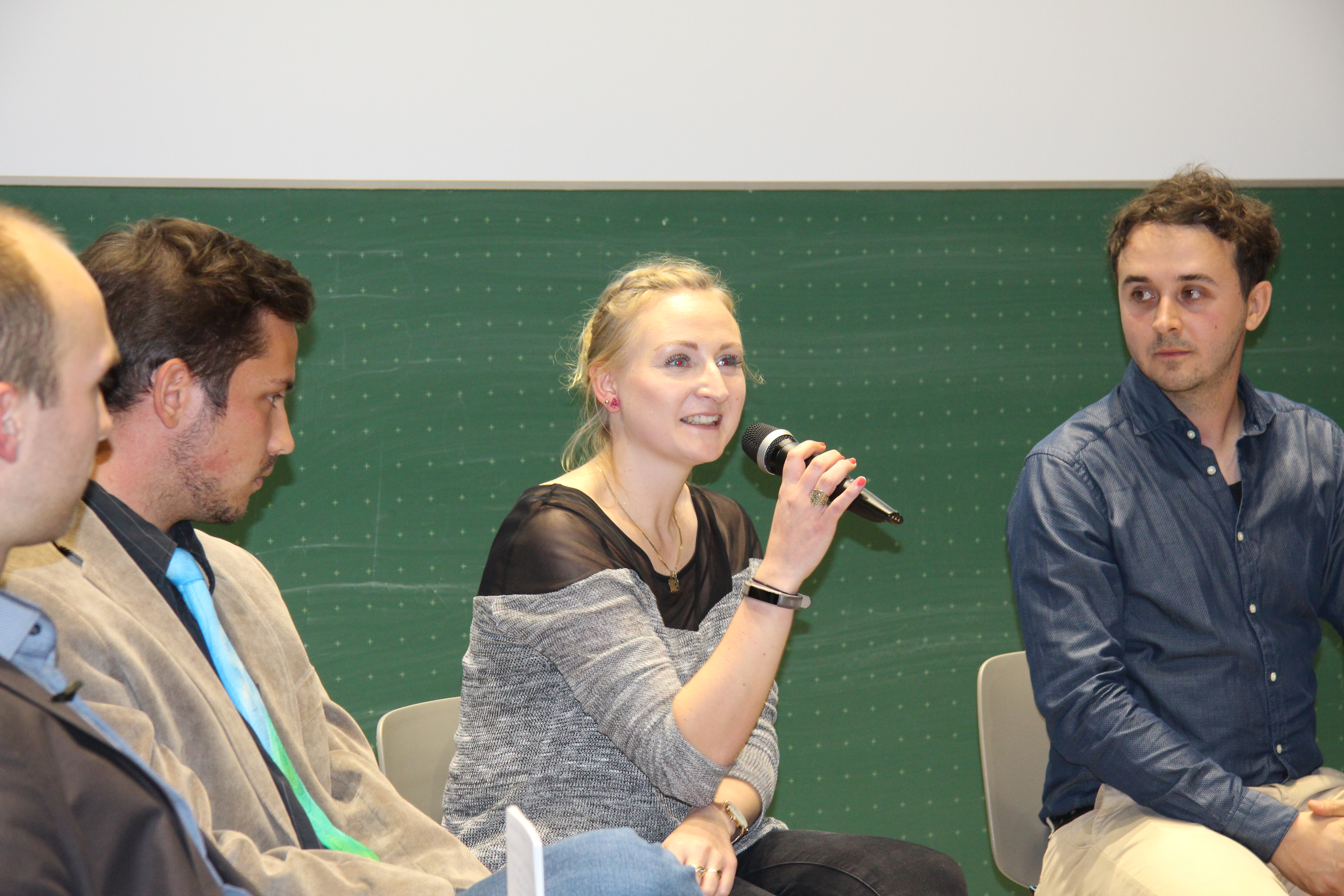 Slideshow 1: Discussion night regarding "Perception of Genetic Engineering and Synthetic Biology in Public"
Previous Next

Together with Nerd Nite, we hosted their first ever event in Graz. If you are wondering what Nerd Nite is – it is an event format, where people from different fields are holding 15-minutes presentations about certain scientific topics they are interested in. These can be subjects with which the persons are intensively engaged or an area in which they are working in, but of course, all scientifically related.

It all started, when the inventor of the event was asked, why he had been absent in his local pub for the last three months. He started a presentation about the expedition he did before and because the audience was so excited about it, it became a regular event.

By now, Nerd Nite is a monthly event in more than 90 cities across the world, during which several people give short and funny, but informative presentations about different topics

As we were able to host the first Nerd Nite ever in Austria, we were very proud to present our iGEM project there as well.

One of the participants at the event was Alexander Murer, former molecular biology student, who did present his start-up “Briefcase Biotech GmbH”. He is now working on a DNA-printer that makes it possible to print primer in the shortest possible time. “Producing your own DNA Primers becomes as convenient as brewing a nice cup of coffee”, Alexander Murer. Check out their homepage!

Daniel Derndorfer, another participant, did present “OLGA”, Open bioLab Graz Austria, the first biohacker laboratory in Austria, where people can meet and discuss scientific topics and work on their own research.

Martin Stefanec presented “ALL”, Artificial Life Lab, an interdisciplinary workgroup of the Department of Zoology from the Karl-Franzens University of Graz. In this group, students are working on bio-inspired robots, bee simulations, virtual brains or robot swarms for example. Take a look at their homepage!

After the presentations, there were lots of exciting discussions about future possibilities in the field of research and science. In addition, new ideas were raised about how to make laboratory life easier for scientists. We are curious to see, which of these great ideas might be implemented. 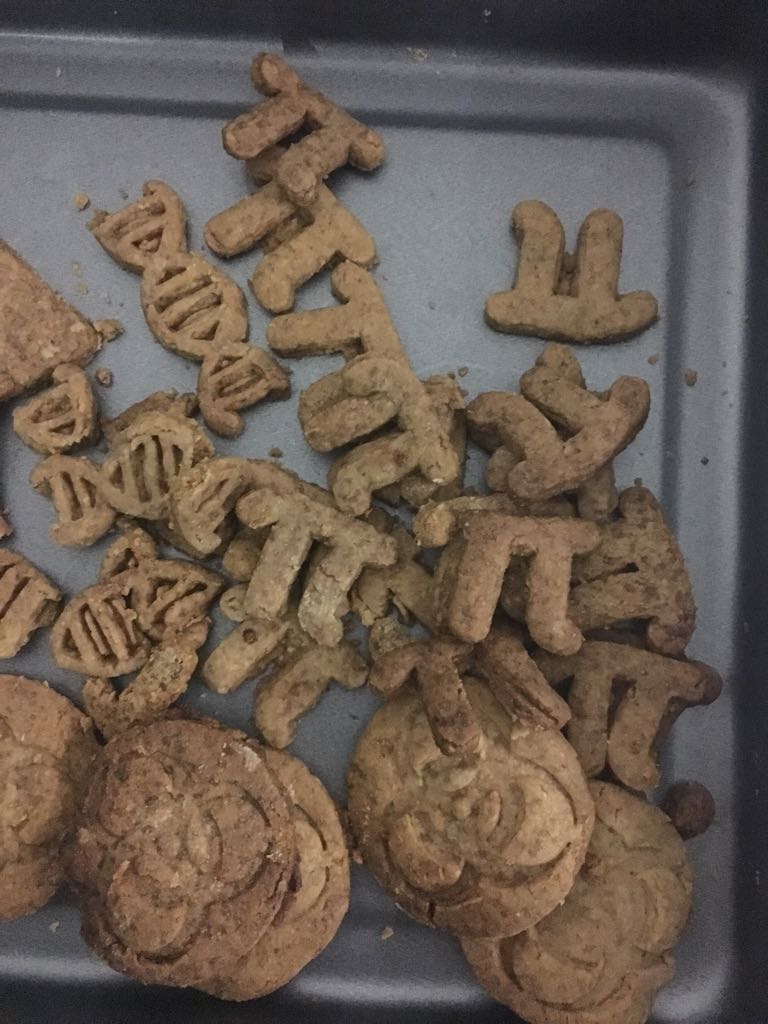 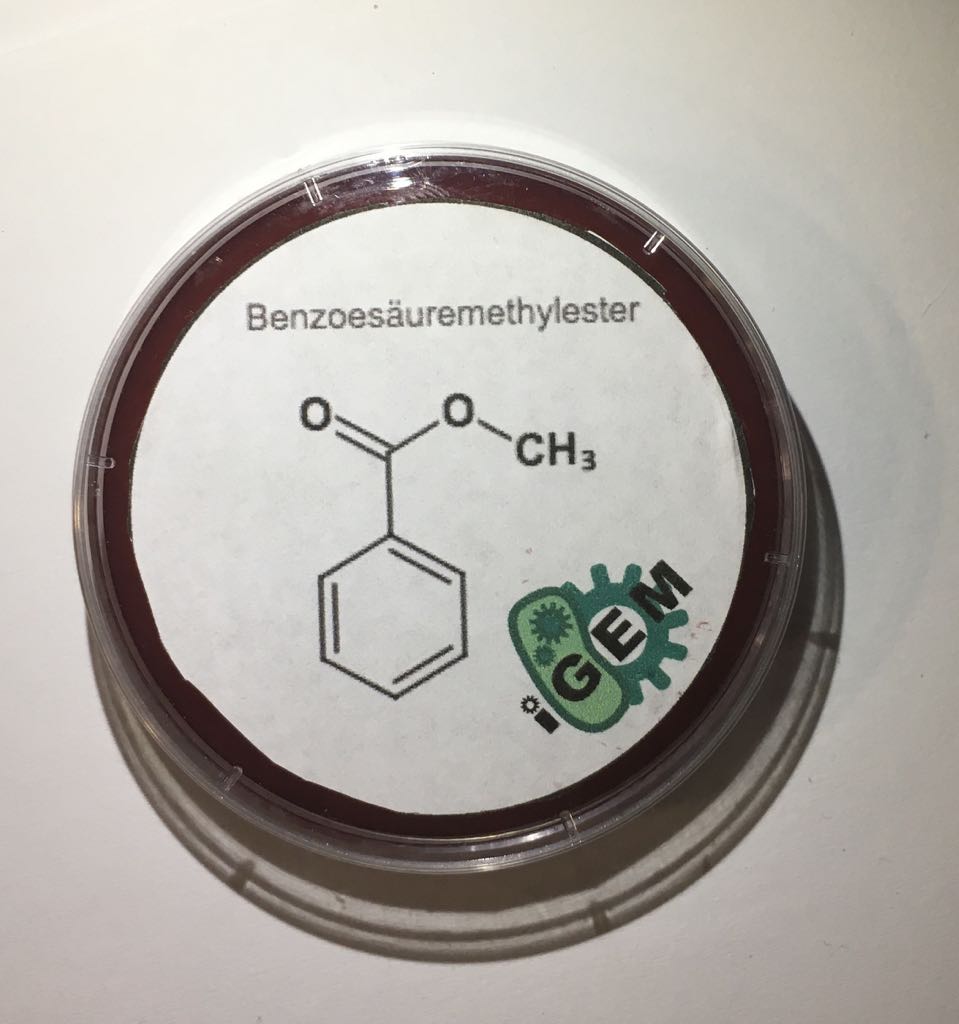 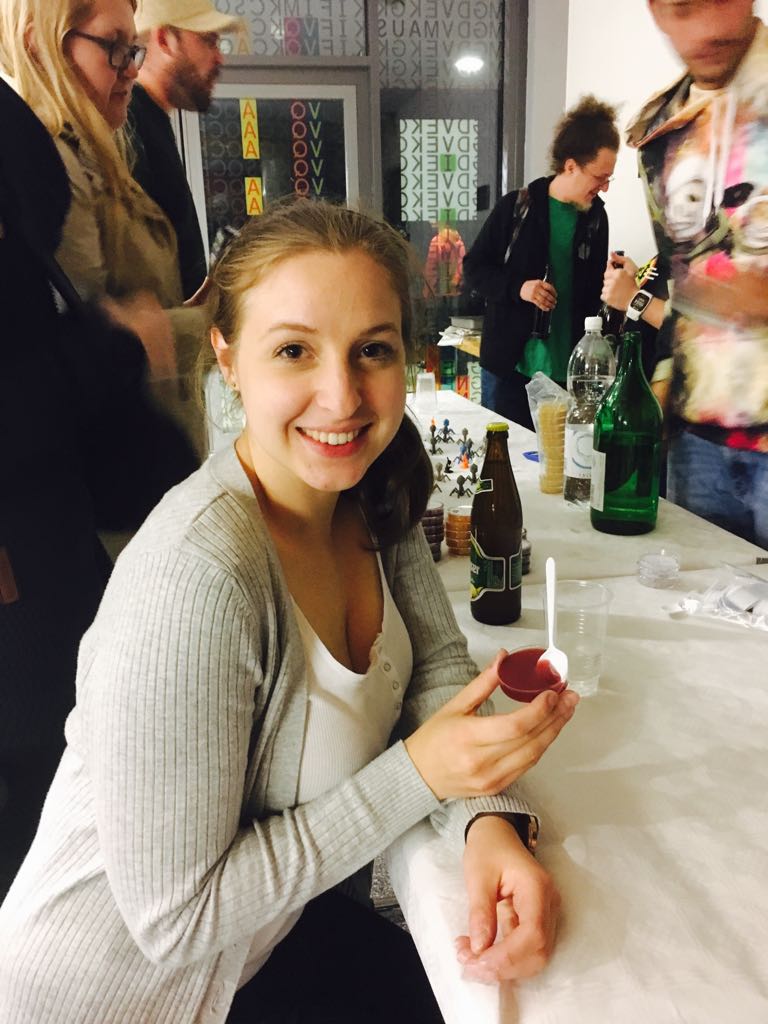 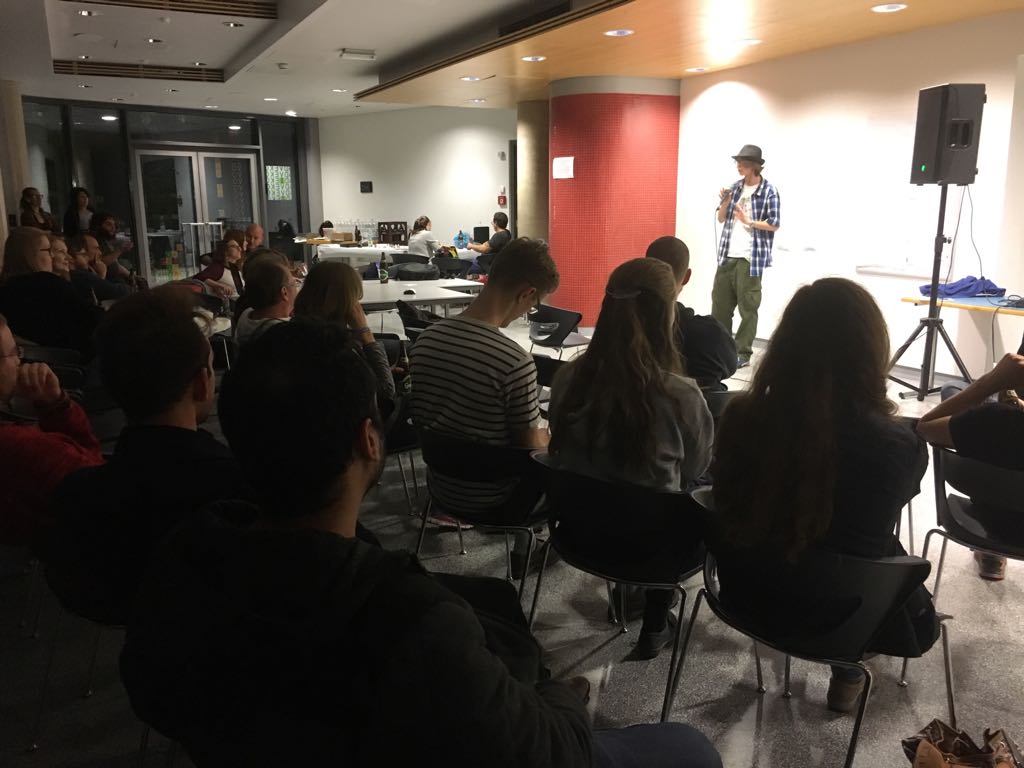 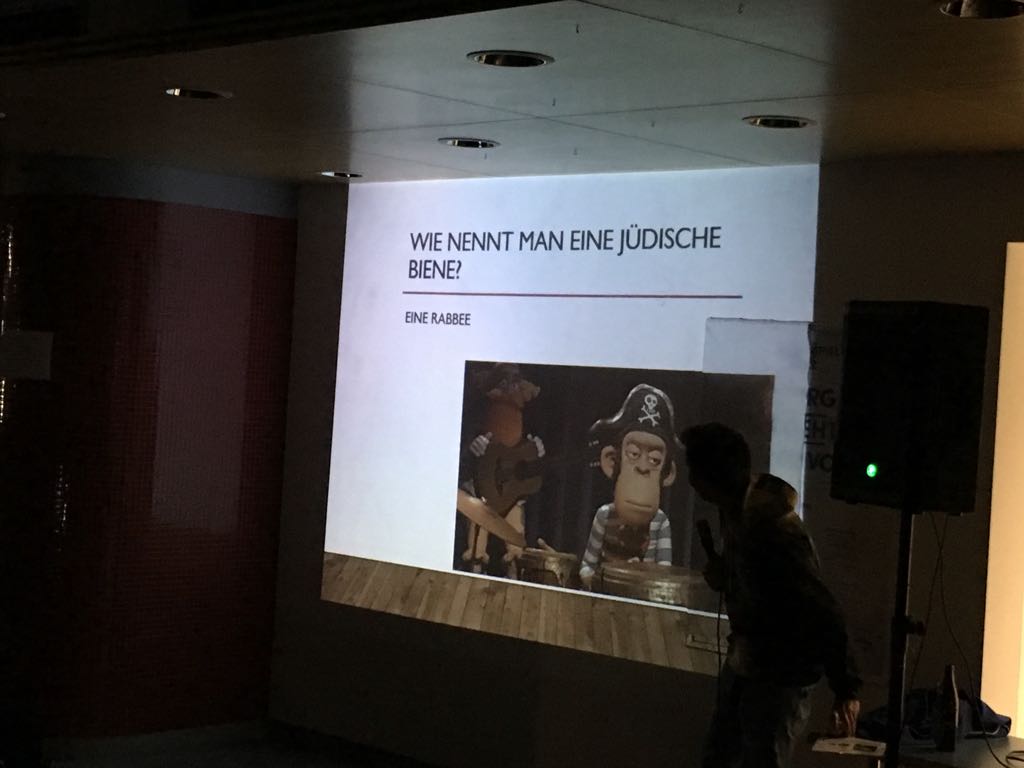 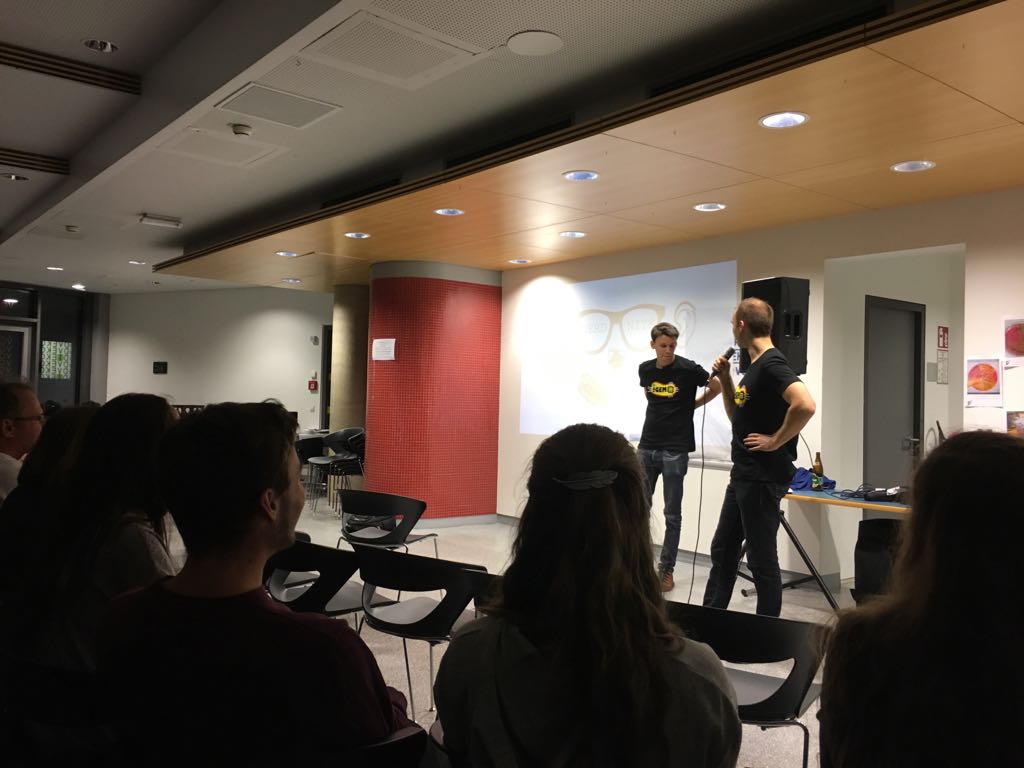 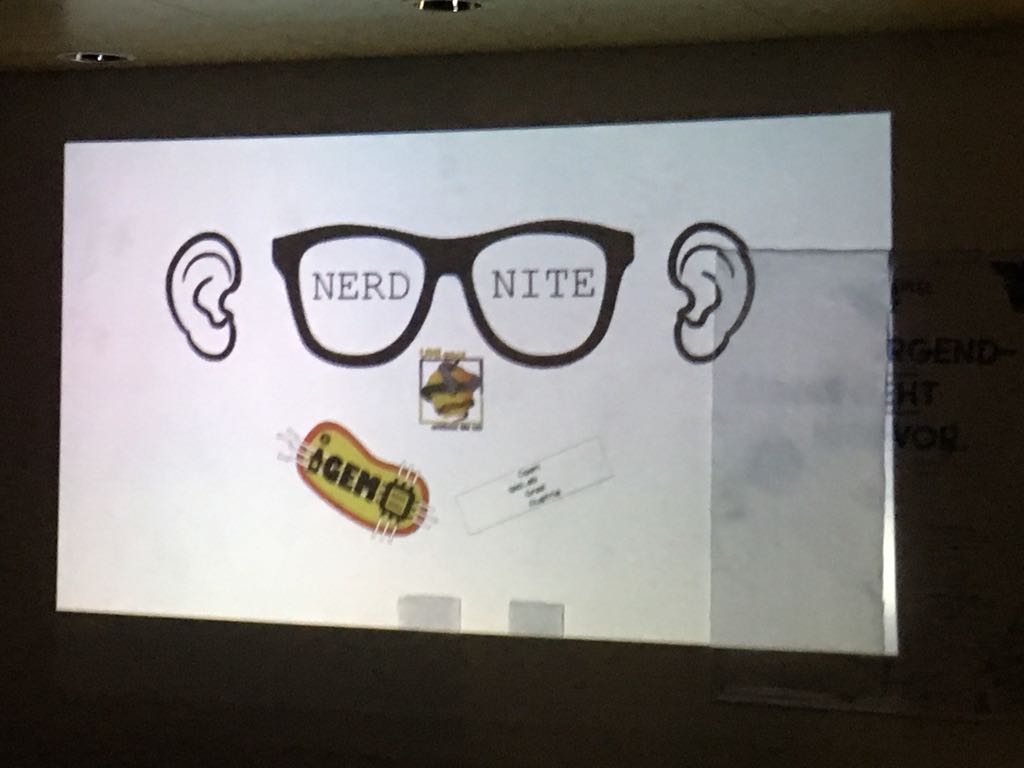 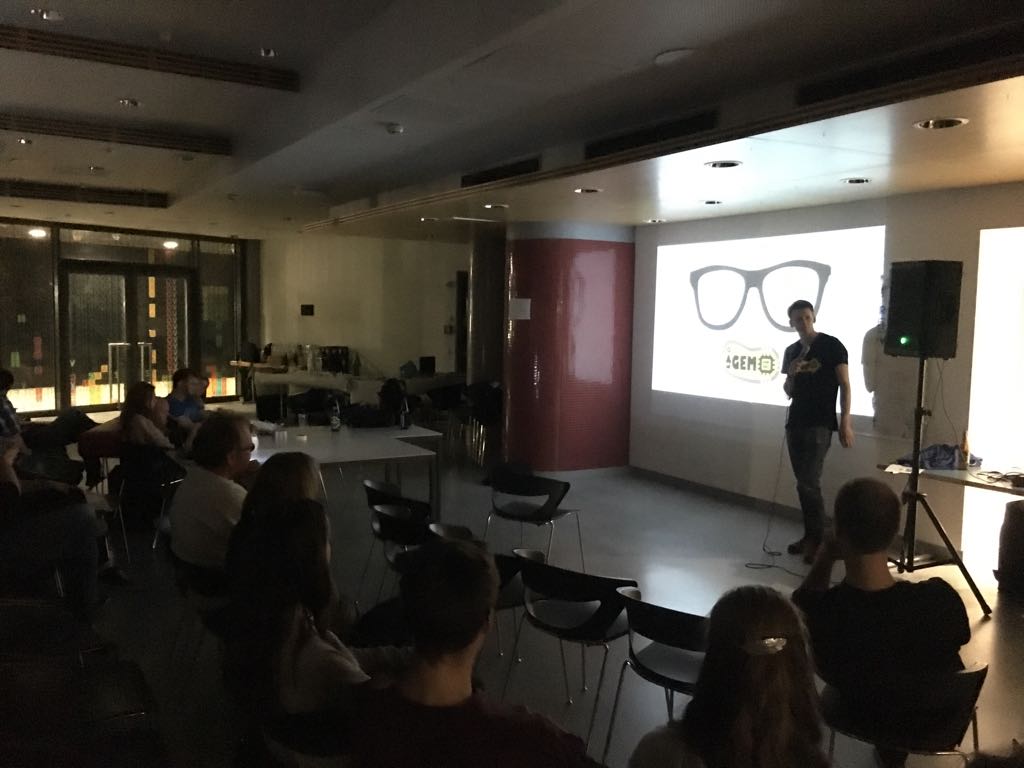 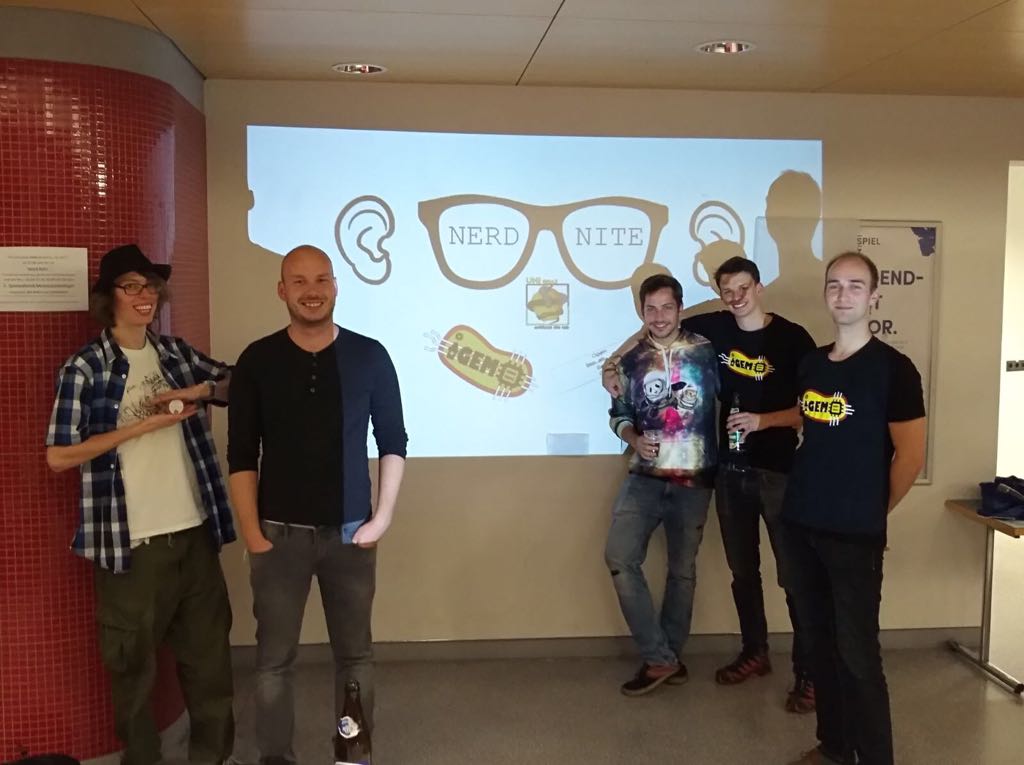 Slideshow 2: Lots of stimulating talks about science at Nerd Nite
Previous Next