To test the hypothesis that our yeast ‘capsules’ and molecule modification can increase thermal stability of Obesumbacterium proteus phytase we will carry out the following experiment. 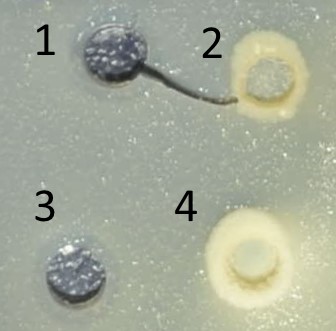 As shown in the picture, reaction has passed in both experiment wells and has not passed in the control wells. Besides, we can see that the radius of activity of the modified phytase exceeds the radius of activity of the normal phytase. This is due to the fact that when heated, the cell wall can reduce thermal impact destroying the enzyme but cannot fully protect it from such impact. Besides, normal phytase is partially destroyed because of proteolysis in yeasts and efficiency of the sample decreases, while the modified phytase retains its efficiency as in our project we have increased its stability by protecting its N-end with a compact protein

After obtaining first results proving that our hypothesis is valid and the experiment is successful, we will perform one more test using more sensitive medium. The picture shows the radius of activity of our modified and normal phytases. The difference of the radii demonstrates higher activity of the modified enzyme.

Method: agarose gel with sodium phytate and calcium salts is prepared, poured onto Petri dishes and given time to cool down. After that wells of 5 mm in diameter are made with 2.5 – 3 cm left between them and filled with homogenate or intact cells preheated at 70°C. When phytin is broken down by phytase a complex is produced which precipitates and produces visible circles. Their radii make it possible to assess phytase activity and success of the experiment in general.