Whether your project has any chances to be applied in everyday life largely depends on how it will be accepted by the general public – especially if it has something to do with gene engineering.

Recently the problem of GMOs has been widely discussed in Russia. According to the Russian Public Opinion Research Center, in May 2014 54% of our citizens would refuse to buy products containing GMOs, and the research conducted in the beginning of 2015 showed that 82% of our country’s population would approve a ban on GMO products. More than a half of Russian citizens do not buy GMO food on principle and about the same number of people do not even know the meaning of the abbreviation.

iGEM as we see it is not just a competition: it is a perfect platform for us to popularize the ideas of genetic engineering and a promising opportunity to increase public’s interest in synthetic biology and science in general (among young people in particular) and oppose current widespread hostility towards GMOs. As in most cases such low interest and high hostility are determined by low awareness we decided to attack this unawareness on all fronts.

First of all, in order to obtain information on public opinion not only from official open sources but directly from people surrounding us and assess their level of awareness and – which is even more important – their desire to be aware we developed a questionnaire for a survey that was conducted in partnership with Smart Cities, the leading Russian commercial educational project for children. Our survey covered over 160 on-line and direct respondents of various background mostly 25 to 45 years of age. The results we obtained are presented below.

The survey has demonstrated that in general people have more prejudice against gene engineering when it concerns humans than when it concerns animals. More than a half of respondents do not pay attention to whether the food products they buy contain any GMOs. About one fifth of them do not even know the meaning of the abbreviation, which can probably mean that they don’t care about it much and only 27% really care about what they consume.

The survey also included questions regarding the future of the science in general and showed that people believe in scientific achievements. About 90% of our respondents would like their children to choose an academic profession and have a chance to obtain special skills and knowledge in their school years already. They suppose that biology programs at schools should be expanded with such disciplines as genetics, molecular biology, embryology, gene engineering, bioinformatics, etc.

Presentation at the Agency for Strategic Initiatives 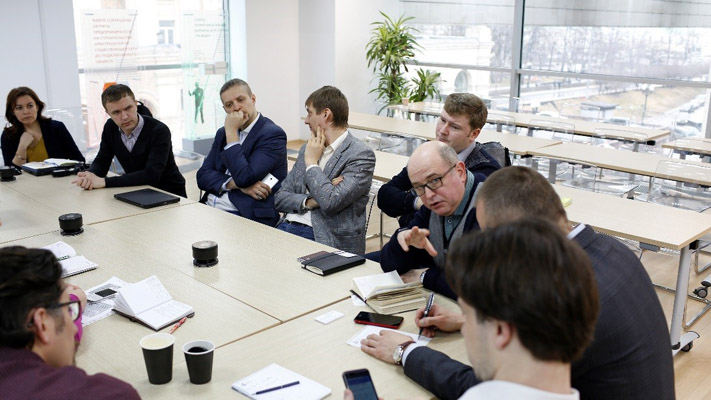 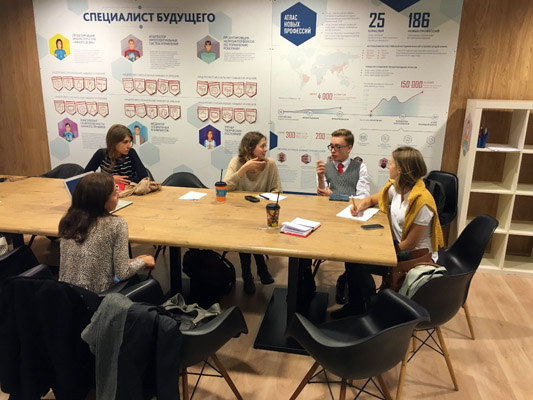 In March our team’s project was presented at the Agency for Strategic Initiatives (ASI). ASI is a non-commercial organization established by the Government of the Russian Federation for promoting social and professional mobility of young specialists in Russia. The participants of the meeting were representatives of leading Russian higher educational institutions that arrange their own competitions for students specializing in biology. One of our team’s targets at the meeting was popularizing the ideas of synthetic biology in general and the iGEM competition in particular as an opportunity for local and national competition participants to develop their projects further and present them at the international level. Our guests appreciated the principles and the format of the iGEM competition As a result of the meeting Russia’s team participation in iGEM-2017 was included in ASI’s strategic initiatives of the ‘Young Professionals’ sector. After the presentation our team was invited to hold our weekly non-lab meetings in the ASI’s premises.

Our visit to Sirius 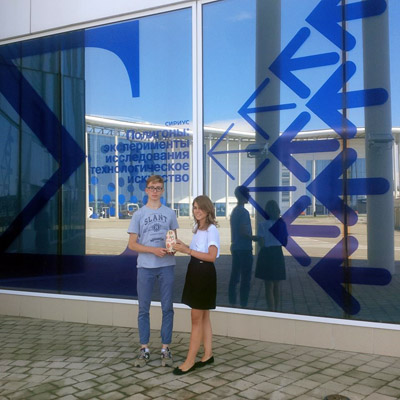 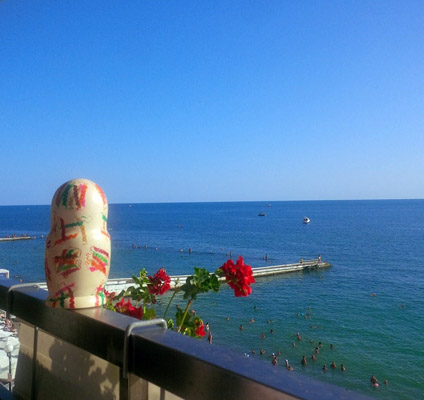 In July our team members visited Sirius, an educational center in the Olympic city of Sochi that was founded by the Talent and Success Foundation under the Russian President’s initiative. The activities of the center are aimed at early discovery, development of and further professional support for talented children having outstanding skills in arts, sports, science, and technical creativity. Over 600 gifted schoolchildren aged 10 to 17 come to Sirius every month from all over the country to spend time among their peers, share their knowledge and experience and have fun. It was a great opportunity for us to communicate with highly motivated schoolers inspired with fantastic ideas which they presented at the final conference. In our turn, we used this opportunity to present our project and the iGEM competition itself as we believe that popularizing synthetic biology among the youngest paves the way for its great future.

Wer nichts weiß, muss alles glauben ©. Those who know nothing must believe everything, and those who know nothing about synthetic biology and gene engineering easily believe the rumors that they are harmful and even dangerous not even trying to find out why. And the most effective way to change the situation for the better is educating. So, we decided to start from ‘planting seeds of doubt’ among the young who seem to be more inclined to accepting the new than their parents and grandparents: we decided to start from schoolers. 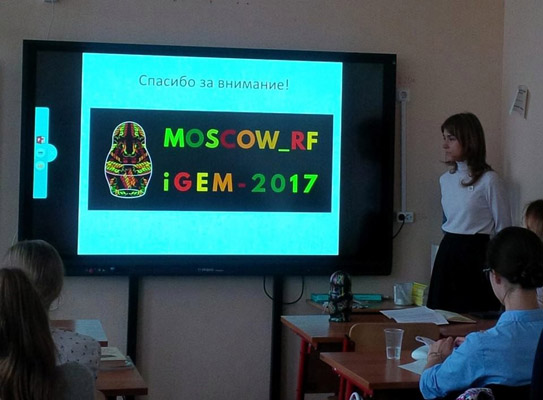 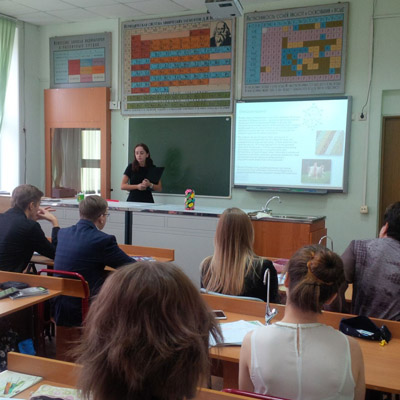 First of all, our team arranged a series of lectures for high school students. The main goal we set was awaking their interest in biotechnologies and the best way to do it was to tell them about iGEM and our project itself. We believe that such lectures will help at least some of them to comprehend what synthetic biology is about and encourage them to build their future career in this field. The presentations prepared by our high school students consisted of two parts: about the iGEM competition and about our project.

Unfortunately, school educational programs mostly imply working with text materials and only a minor part of work (if any) is conducted in labs. That means that there is a huge gap between theory and practice. Besides, there seems to be a huge gap between science and real life as in many cases science is perceived as something that exists and develops ‘somewhere out there in a lab’. Probably these are the factors that make some young people dismiss the idea of pursuing science. In this context our iGEM project has become a bright demonstration that science can be something at your fingertips. It has become quite a surprise for the audience that just the same schoolchildren as they are themselves do not only perform lab experiments but also think of the future of the project, the way it could be integrated into real life and influence it and the place of synthetic biology in the world of today and tomorrow. During our Q&A session along with questions regarding the project itself there were a lot of questions about the principles and policy of the iGEM competition, opportunities and requirements for participating in it, etc. So we hope that our lectures and presentations have convinced our young audience that nothing is impossible and incited at least some of them to try their hand in this field. 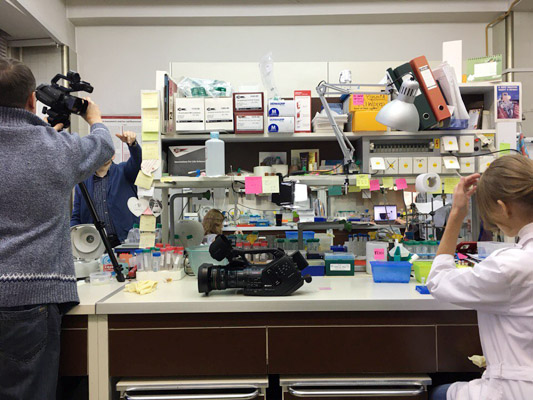 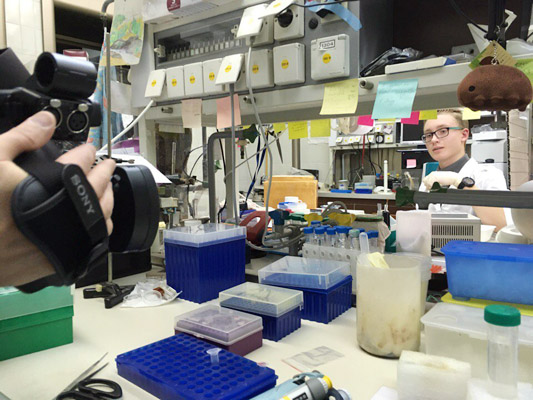 To encourage our peers even more and help those who are taking their first steps in the world of synthetic biology we have made a series of tutorial videos explaining how to use some basic lab methods. There are five of them: PCR, agarose gel electrophoresis, heat-shock transformation, isolation/precipitation of plasmid DNA, and restriction. In our videos we show and explain in detail how to perform them step by step in the real lab setting. Our videos (you can find them below) will be available in our social networks and YouTube channel.