First introduced in 1998, the bacterial two-hybrid system (BACTH) based in Escherichia coli facilitated the screening of interactions between two proteins, and provided a simpler, yet powerful, alternative to the well-known yeast two-hybrid technology (Karimova et al.; Battesti and Bouveret). BACTH utilizes the catalytic domain of Bordetella pertussis adenylate cyclase. Here, the two complementary fragments of adenylate cyclase, T18 and T25, are each fused to one of the proteins of interest. Good interaction between the two proteins allows for the reconstitution of the two halves of adenylate cyclase, thus restoring the synthesis of cyclic AMP (cAMP) from ATP (Figure 1). In catabolic operons, such as the lac operon, cyclic AMP binds to the catabolite activator protein (CAP), increasing the affinity of CAP for DNA, and thus transcription through CAP’s interaction with RNA Polymerase. 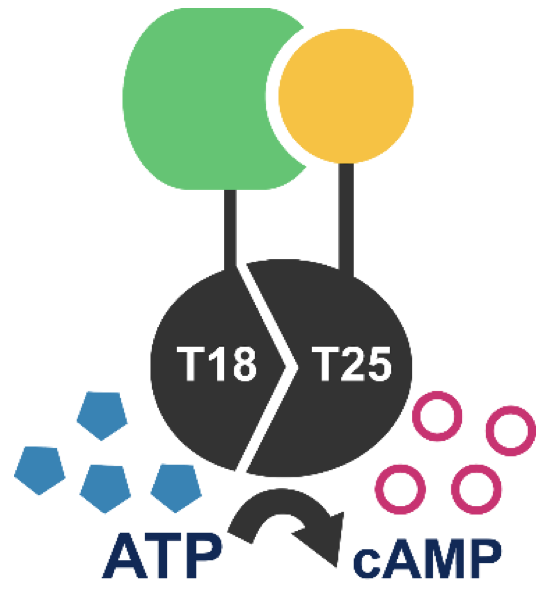 Existing kits of BACTH has T18 and T25 in two different plasmids (Figure 2).

Because our RISE system involves transforming another plasmid carrying the genes required to produce gas vesicles (BBa_K2389060) and we know that transformation efficiency suffers with multiple plasmids, we wanted to streamline the BACTH system and combined both T18 and T25 subunits in one plasmid, which we refer to as pT8-O (Figure 3). To facilitate its use, pT8-O has the following features: 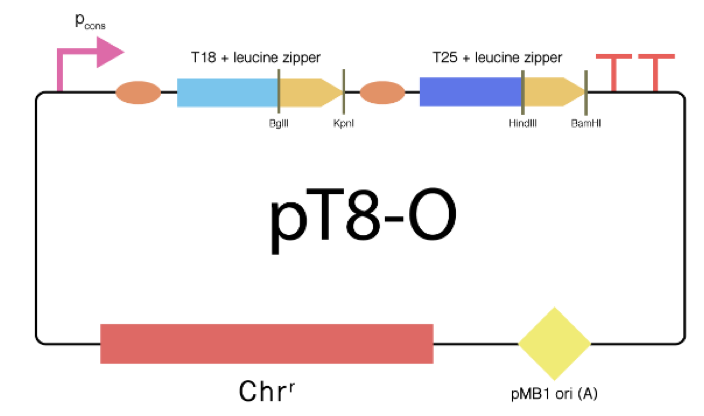 The BACTH kit Team UAlberta ordered had both T18 and T25 subunits under the control of the lac promoter, which allowed for inducible expression. However, we wanted to ensure that expression of the two subunits, and the proteins of interest, is not the limiting factor in the production of gas vesicles. Therefore, we replaced the lac promoter with the strongest constitutive promoter in the Anderson promoter collection (BBa_J23100).

When designing this construct, we found a paper by Chen et al. that determined the optimal spacing between the Shine-Dalgarno sequence and the initiation codon in E. coli, and decided to use their reported RBS sequence (Chen et al.).

Commonly found in DNA-binding motifs, where they serve as a dimerization domain, leucine zippers are alpha helices with a leucine zipper at every seventh residue for eight turns(van Heeckeren, Sellers and Struhl). The commercial kit for BACTH uses leucine zippers as a positive control (possibly also due to their small size of ~100 bp), and we decided to also incorporate the leucine zippers into pT8-O. Flanking the leucine zippers are two unique pairs of restriction enzymes (BglII/KpnI and HindIII/BamHI) so that researchers can work with one subunit without affecting the other subunit.

We codon-optimized the coding sequence for T18, T25 and the leucine zippers to increase expression levels and improve the translational efficiency.

gvp3.0 is an engineered operon consisting of different alleles of gas vesicle protein (gvp) genes, gvpA and gvpC. Both genes encode for the main structural proteins of gas vesicles, though, the different versions of gvpC (gvpC16 and gvpC20Ψ) allow for the production of varied gas vesicle phenotypes. Expression of the gvp3.0 construct is under control of the lac promoter (pLac), allowing inducible expression using IPTG in the presence of cAMP. Gas vesicles are impermeable to water and entrap ambient gases within their structure. This property leads to an overall change in cytosolic density which has been seen to confer buoyancy to microorganisms which synthesize gas vesicle proteins. Our gvp3.0 construct is based off of the wild-type cluster found in the cyanobacterium Planktothrix rubescens. We have maintained this wild-type sequence of the gvp gene repeats, as this arrangement has been found to be conserved in the buoyant strains of P. rubescens. We hypothesize that the preservation of this sequence may have influence stoichiometric control of gvp subunits, or transcriptional efficiency.

As of now, the gvp3.0 construct is still undergoing thorough characterization. Though, the BioBrick has been sequenced verified and submitted to the iGEM BioBrick Registry as part of Team UAlberta’s Parts Submission. Currently, we have performed a series of buoyancy assays with gvp3.0 transformed E. coli. Though, we have been getting inconclusive results as different instances of our buoyancy assays have shown different indications of buoyancy, while some have not.

A promising sign which may indicate that the gvp3.0 construct is successful in generating gas vesicles when expressed are our transmission electron microscopy (TEM) micrographs. With the help of Dr. Xuejun Sun and Mrs. Priscilla Gao, we have obtained images of our gvp3.0 transformants where structures, that resemble those of gas vesicles, as described in [insert citation], are observed. However, it will be necessary to repeat imaging of our samples with TEM with a separate biological replicate to confirm that gas vesicles are being synthesized.

We faced several difficulties before getting to the final gvp3.0 construct. Our first attempt in the assembly of the gas vesicle proteins, which we referred to as gvp1.0, attempted to clone in 11 gas vesicle genes split up into 3 gblocks. Unfortunately, after many, many attempts, we were unsuccessful in assembling the whole cluster using Gibson Assembly. So, it was back to gene design once again! During our gvp2.0 attempt, we had another gas vesicle construct, based on the gas vesicle gene cluster from Planktothrix rubescens , being made in parallel. A paper published by 2012 iGEM team, Ocean University China, used two genes from the cyanobacteria and they were able to observe buoyancy. However, after some further digging, recent iGEM teams, like Groningen 2014, were not able to replicate their results. Thankfully, our discussion with iGEM team IISc Bangalore lead us to other literature which convinced us to use the wild type gene sequence in P. rubescens to help our chances in conferring buoyancy to E. coli.

This construct codes for the green fluorescent protein (GFP) under the control of the lac promoter, which has the catabolite activator protein (CAP) binding site, and the lacI gene under constitutive expression. This reporter is a modified version of BBa_K611016, where we replaced the arabinose-induced promoter of the lacI gene with a constitutive promoter (BBa_J23106). As a result, induction with arabinose is no longer necessary for lacI expression, and we also believe that this constitutive promoter will lead to more consistent expression levels of lacI. For our project, The titratable expression of GFP serves as an indirect reporter for the strength of protein-protein interactions in the Bacterial Adenylate Cyclase Two-Hybrid (BACTH) system.