In our project, we will use the UAS-GAL4 system within temperature controlling and the specific promoter control the expression of dopamine in Drosophila’s brain and finally construct a temperature-controlling courtship model.
Molecular Cloning
We constructed three plasmid, pleP-GAL4, pleP-GAL80ts and UAS-TH to control the courtship ritual of Drosophila. Which use the specific promoter pleP, transcription factors GAL4 and GAL80ts, regulatory sequence UAS, and coding sequence TH. They were all found on different papers and fruit flies websites.
After we constructed the plasmids, we asked the SIBS (Shanghai Institute for Biological Sciences) to inject the plasmid into Drosophila egg using micro-injection technology. By doing that, we can get a stable strain of which we can control the behaviors of Drosophila such as male-male courtship more effectively.
Fruit fly screening and testing
We screened out the Drosophila in which our target gene was expressing stably.
To test whether our construction worked or not, we did some Molecular Biology (real-time PCR) and behavioral (male-male courtship and sexual preference change) experiments. Finally, we selected out the fruit fly which performed as expected and recorded their courtship behavior on video. Moreover, we designed experiments to compare the transgenic and wild-type fruit flies in terms of viability and fertility to test whether the reproductive function of transgenic Drosophila was normal.
Through eight experiments, we got the following results: [1] Dopamine levels are regulated by the temperature in the system and result in significant behavioral characteristics and [2] the reconstructed Drosophila is similar to the normal fruit fly in terms of survival and reproduction.
Model
We set up a mathematical model to predict whether our transformation of Drosophila can play a positive role in pest control.

Direct hazards:
1) Bite, harassment: sucking mosquitoes, sand flies, gnats, midges and flies and other insects can be stabbed vampire, was bitten at itching, severe papules-like urticaria, affecting the normal life and production of animals.
2) Cause allergic reactions: arthropod salivary glands, secretions, excretions and shedding of the epidermis have all heterologous protein which can cause allergic reactions.
3) Parasitic: parasite larvae parasite can cause myiasis, for example, after bovine fly larvae parasitic in the bovine skin, the fur is perforated because of the larvae 'growth, which will lower its use value, at the same time, myiasis can also cause the decline in the quality of beef and the sharply drop in the amount of cattle milk.

Indirect hazards:
Many species of Diptera are used of vector insects in the transmission of pathogens between animals, pathogens, including bacteria, parasites, viruses and rickettsia and so on. Such as mosquito-borne malaria, filariasis, yellow fever and dengue fever, etc.
Chrysopa lucidum, Chrysanthemum, Chlamydomonas, Carassius auratus, Chlamydia trachomatis, Mosquitoes, gadfly and midges and other insect’ bites can make dairy cows infected with mastitis, which is one of the common breast disease during summer and dry milk.

Whether it is direct or indirect harm, the final result always affects the normal life and production of animals.
Fruit fly
The fruit ﬂy Drosophila melanogaster is one of the most powerful genetically tractable model organisms. Work using Drosophila has made many valuable contributions to our understanding of animal development, behavior, and physiology and of human disease. While Drosophila is also a member of Dipteran fly. 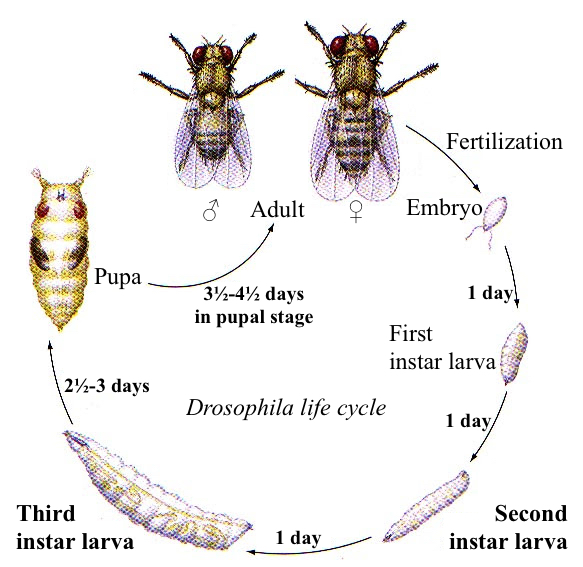 UAS-GAL4
In yeast, GAL4 regulates the galactose metabolism, transcriptional activation of galactose utilization genes occurs when GAL4 binds to the upstream activation sequence (UAS) containing a varying number of a 17-mer repeat. GAL4 binds to DNA as a dimer through a Zn (2)-Cys (6) zinc ﬁnger. The N-terminal region mediates both dimerization and DNA binding and contains a nuclear localization signal, while an acidic C-terminal domain controls transcriptional activation. GAL4 directly interacts with the Tra1 component of the SAGA complex, recruiting Mediator and the general transcriptional machinery to initiate transcription. This ability to activate transcription is retained when GAL4 is expressed in other species including plants, human cell lines, zebraﬁsh, and Drosophila. 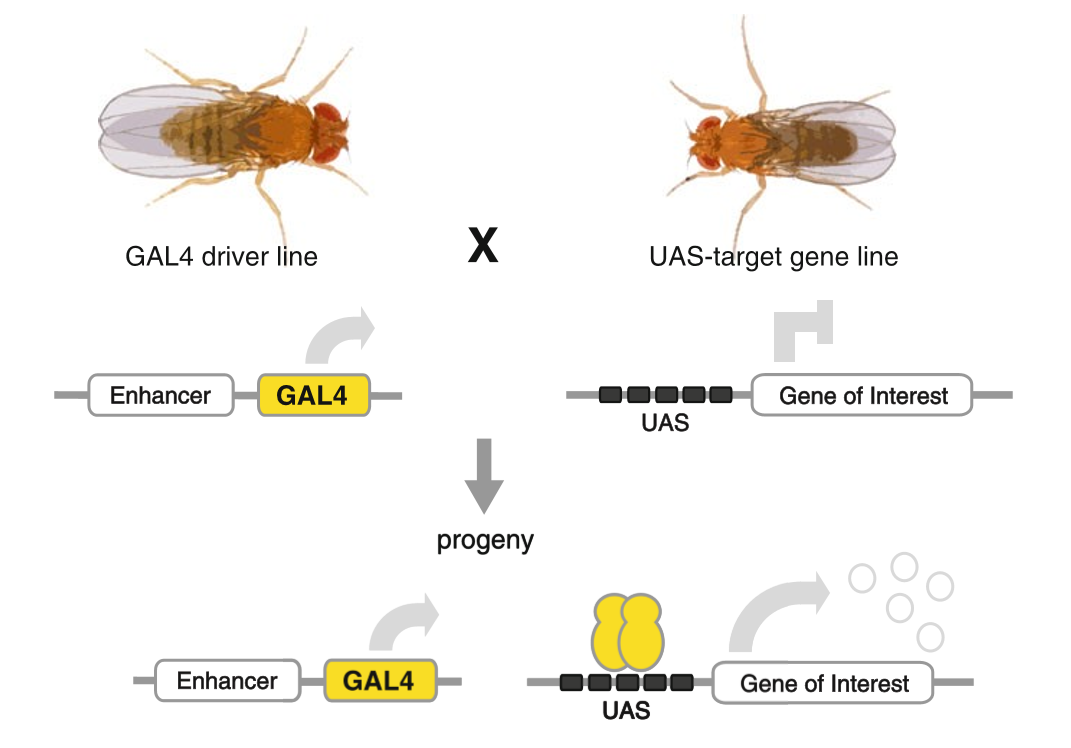 Gal80 and GAL80ts
The activity of GAL4 can be repressed by physical interaction with the yeast GAL80 protein. A dimer of GAL80 binds to the C-terminal ends of the GAL4 dimer so that, while it can still bind to a UAS sequence, it can no longer activate transcription. This interaction of GAL4 and GAL80 can be taken advantage of to reﬁne the expression pattern of GAL4-dependent transgenes.
Temporal speciﬁcity can be achieved using a temperature sensitive allele of GAL80. The Temporal and Regional Gene Expression Targeting (TARGET) system takes advantage of a variant of GAL80 that while ubiquitously expressed under control of the tubulin 1α promoter is only active at permissive temperatures.
Thought to be the result of a single glycine to arginine substitution at amino acid 203 of GAL80, GAL80ts is unable to bind GAL4 at restrictive temperatures above 29 °C but retains its repressive function at the permissive temperature of 18 °C. Controlling the activity of GAL80ts through temperature shifts provides temporal control of GAL4-dependent transgene expression. Limiting expression to deﬁned temporal windows can help to deﬁne critical periods for the effects of misexpression or rescue experiments. Temperature- sensitive alleles of GAL4 itself have been generated and tested in Drosophila, however the ease of combining tubGAL80ts with already established GAL4 drivers cause the TARGET system to be more commonly used.