Our plasmids are based on pUAST+3xHA, for which works for UAS-GAL4 system in Drosophila, and we transform it to pUAST+oligo which removed UAS and inserted a new MCS for constructing needs. 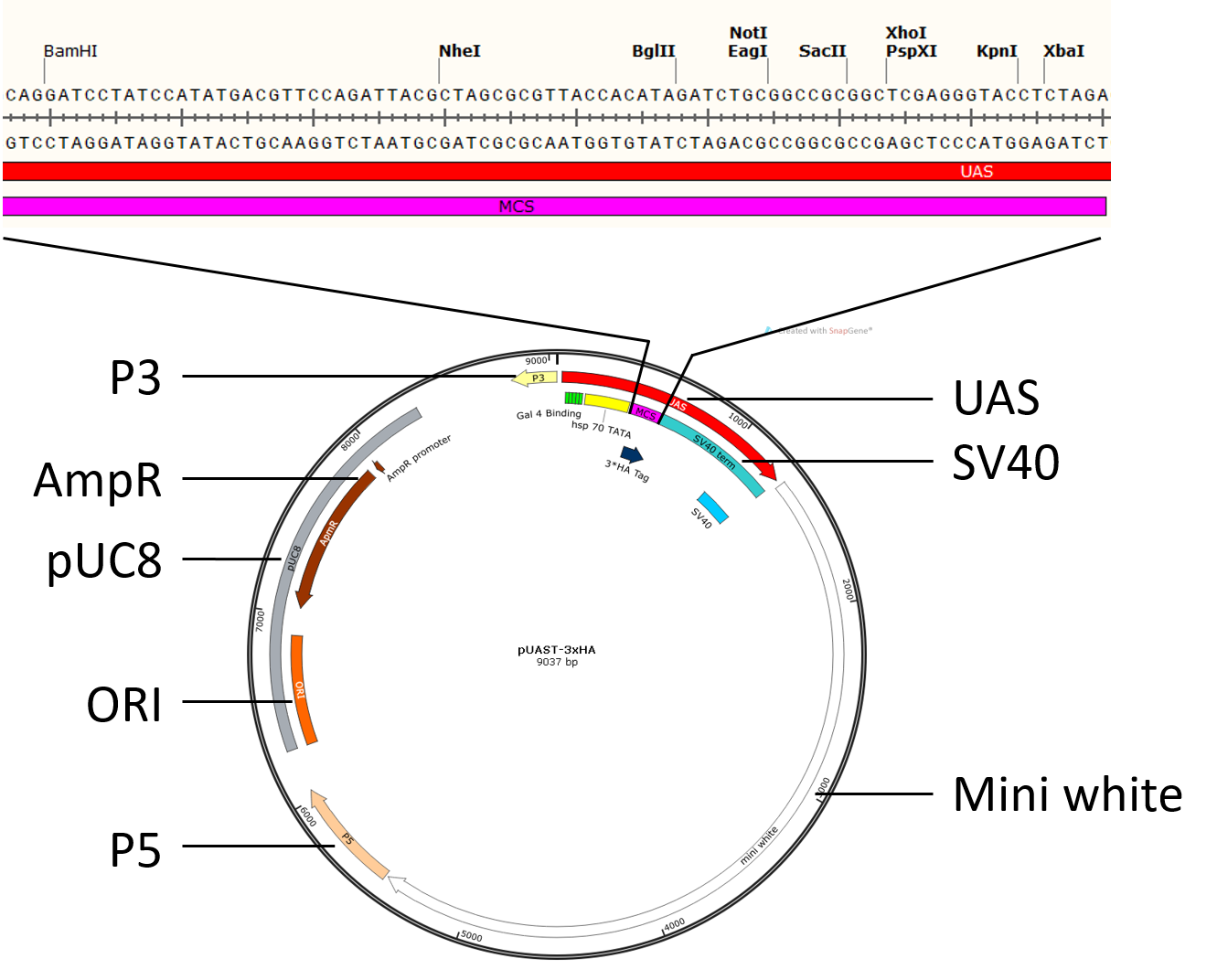 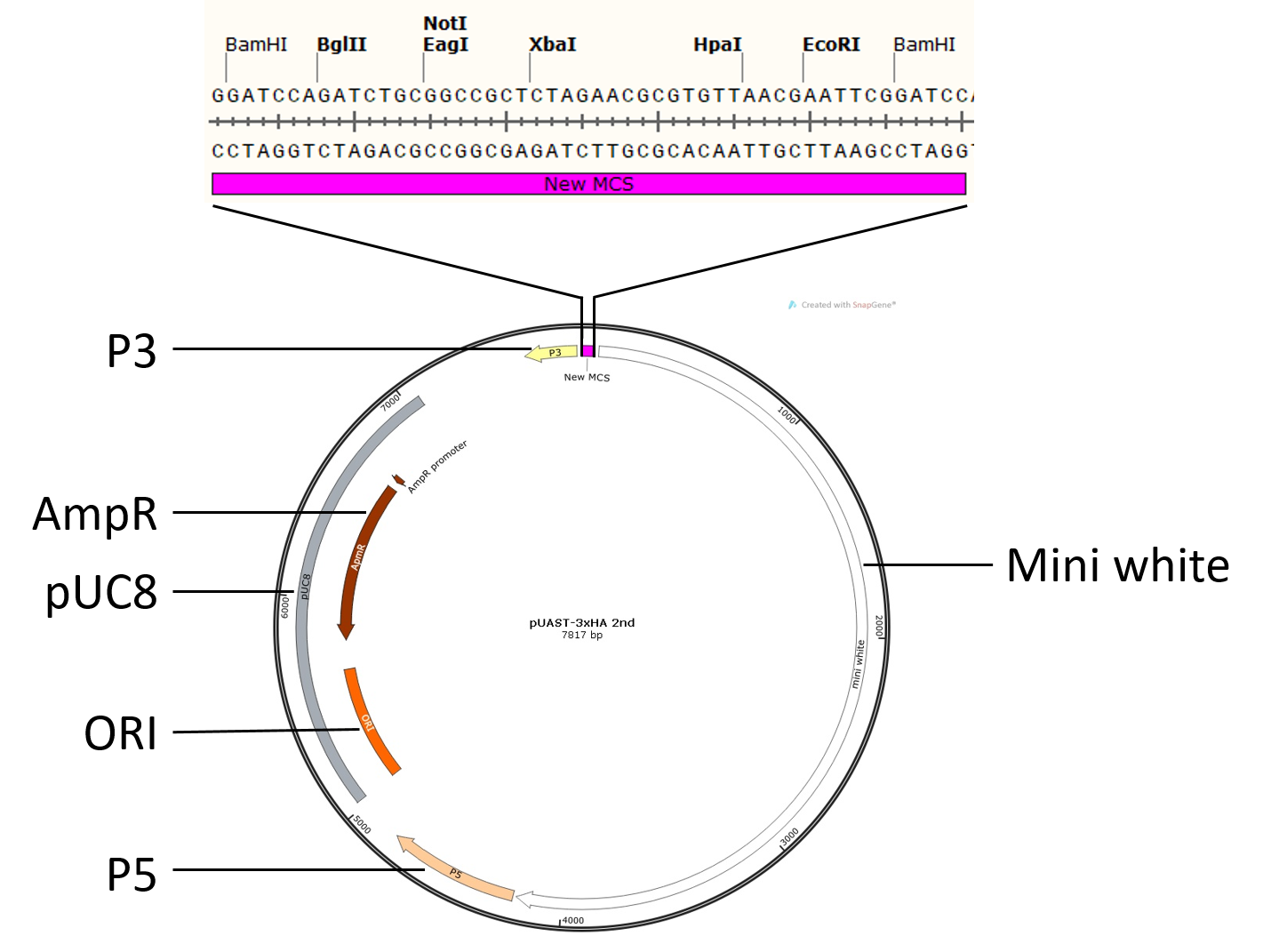 pUAST-3xHA is an expression vector commonly used in Drosophila research, and it is based on pUC8 vector.
The P3 and P5 are the integrated efficiency elements from viruses, which lead the parts we constructed integrate to the Drosophila’s genome.
Hsp70 TATA is the site of contact for RNA polymerase II, in which will start the transcription of downstream gene inserted into MCS.
SV40 will start the expression of gene mini white, which could change the eyes’ color into red (white in wild type) when we integrate successfully. So it can help us screen out the modified flies.


BBa_K2374001—TH (ple) promoter-> (fruit fly)
Pale is a tyrosine hydroxylase, the first and rate-limiting step in the synthesis of dopamine (and eventually, melanin). Dopamine has critical roles in system development. This part is a 452bp sequence in 5' upstream of the ple exon. This promoter starts in cell which express dopamine specifically. So we use it to start the expression of downstream gene GAL4 and GAL80ts in tissue which express TH.

BBa_K2374003—ple (Tyrosine 3-monooxygenase, TH) -> (fruit fly)
ple (TH) is a rate-limiting enzyme in the dopamine’s synthesis, and it plays an important role in the physiology of adrenergic neurons.
Catalytic activity:
L-tyrosine + tetrahydrobiopterin + O2 = L-dopa + 4a-hydroxytetrahydrobiopterin. This subpathway is part of the pathway dopamine biosynthesis, which is itself part of catecholamine biosynthesis.

BBa_K2374004—GAL4 (GALactose-responsive transcription factor)
In yeast, GAL4 regulates the GALactose metabolism. Transcriptional activation of GALactose utilization genes occurs when GAL4 binds to the upstream activation sequence (UAS) containing varying numbers of a 17-mer repeat. GAL4 binds to DNA as a dimer through a Zn(2)-Cys(6) zinc finger. The N-terminal region mediates both dimerization and DNA binding and contains a nuclear localization signal, while an acidic C-terminal domain controls transcriptional activation. GAL4 directly interacts with the Tra1 component of the SAGA complex, recruiting Mediator and the general transcriptional machinery to initiate transcription. This ability to activate transcription is retained when GAL4 is expressed in other species including plants, human cell lines, zebrafish, and Drosophila.

BBa_K2374008—UAS
An upstream activating sequence or upstream activation sequence (UAS) is a cis-acting regulatory sequence. It is distinct from the promoter and increases the expression of a neighboring gene. Due to its essential role in activating transcription, the UAS is often considered to be analogous to the function of the enhancer in multicellular eukaryotes. Upstream activation sequences are a crucial part of induction, enhancing the expression of the protein of interest through increased transcriptional activity. The UAS is found adjacently upstream to a minimal promoter (TATA box) and serves as a binding site for transactivators. If the transcriptional transactivator does not bind to the UAS in the proper orientation then transcription cannot begin.


BBa_K2374005—TH-GAL4
We use the specific promoter pleP (TH Promoter) to control the fixed expression of GAL4, because of the specificity of pleP, GAL4 express in tissue which express dopamine specifically. Then GAL4 binds to the upstream activation sequence (UAS) containing varying numbers of a 17-mer repeat. GAL4 binds to DNA as a dimer through a Zn(2)-Cys(6) zinc finger, and directly interacts with the Tra1 component of the SAGA complex, recruiting Mediator and the general transcriptional machinery to initiate transcription.

BBa_K2374006—TH-GAL80ts
A dimer of GAL80 binds to the C-terminal ends of the GAL4 dimer so that, while it can still bind to a UAS sequence, it can no longer activate transcription. This interaction of GAL4 and GAL80 can be taken advantage of to reﬁne the expression pattern of GAL4-dependent transgenes.
We use the specific promoter pleP (TH Promoter) to control the fixed expression of GAL80ts, because of the specificity of pleP, GAL80ts express in tissue which express dopamine specifically. At 25℃, GAL4 and GAL80ts express, GAL80tsp conbine with GAL4p then stop it to bind to UAS, so the TH do not express.At 29℃, GAL80ts is inactivated, which cannot combine with GAL4p, so GAL4p binds to UAS and starts the expression of TH, leading to the high expression of dopamine.