For the Integrated Human Practices, our team searched through the iGEM registry for a possible kill switch for our microbe. A kill switch would be useful in making people feel more comfortable ingesting the capsule or placing it in potential drinking water. A kill switch would allow the bacteria to be shut down or limited to make sure the population does not grow uncontrollably. We also looked for parts that might improve our project to prevent people from becoming ill due to other harmful bacteria and molecules.Two parts were found that we could use in continuation projects in the next few years. These parts are a population capping device and a dCBD improvement that can bind to metals.

This part is a growth inhibition device that makes a cell release BMP2 which slows or stops the growth of bacteria. In the future, this part can be modified to keep the cell population of our E. coli controlled in the colon of humans or in water. It would prevent the cells from growing and overtaking the cells already living in the ecosystem. This part is already modified for cells in the colon and could be a great addition to our E. coli. 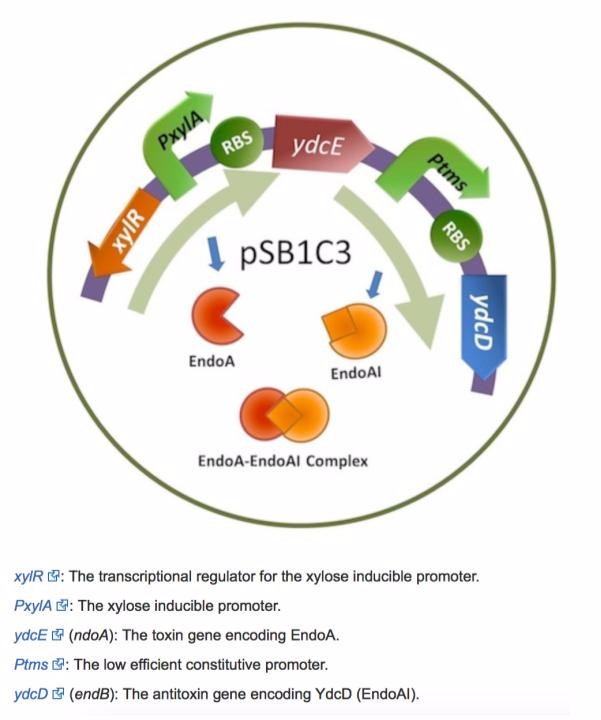 This part uses the double cellulose binding domain (dCBD) that is part of the packaging for our E. coli. This dCBD linker creates a site within the dCBD that binds the cellulose to a metal. This can be useful for our project if we combine it with our dCDB, because it could recognize the presence of a metal with the potential to harm humans when the E. coli cells are in the digestive system or water sample. With this additional part, the cellulose would bind to the metal and trap it so that it can then be tested for different metals.