At the conclusion of our project we had created three working plasmids, all of which were sent to the parts registry.

Part BBa_K2522000 is a plasmid developed using the csgA gene extracted from the genomic DNA of E. coli Nissle, and a double cellulose binding domain taken from the iGEM DNA Distribution Kit. Theoretically, the plasmid should allow an E. coli bacterium to produce curli fibers with a double cellulose binding domain attached to each CsgA subunit so that the bacterium can encase itself in cellulose. However, while sequencing was completed to confirm our plasmid matched our theoretical design, no tests have been performed to validate a working construct yet (Ability to bind to cellulose, ect.)


Part BBa_K2522001 is a working construct developed to produce Super Folder Green Fluorescent Protein in the presence of the quorum sensing molecule 3OC12. The DNA is confirmed to work as theoretically planned through both sequencing and experiment. 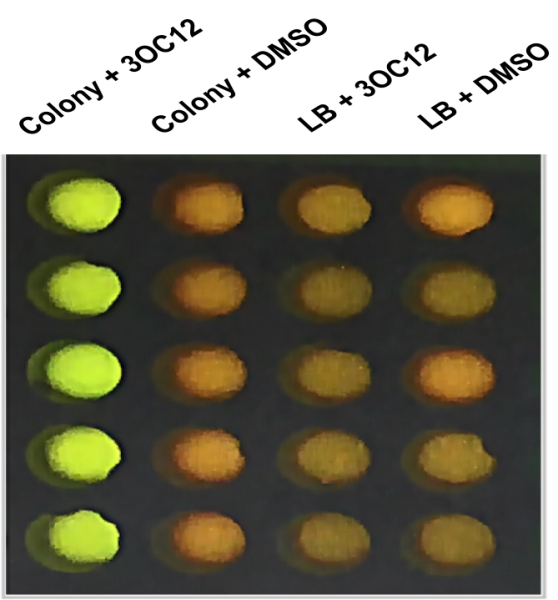 
Part BBa_K2522002 is a plasmid designed to produce sfGFP in the presence of the quorum sensing molecule Auto Inducer 2 (AI-2). While confirmed to match our theoretical design via sequencing, due to time constraints only one experiment was performed. The plasmid was grown up overnight along with supernatant from a E.coli Nissle 1917 sample (which in theory should contain AI-2); however, the test was inconclusive due to contamination (bacterial growth in pure LB broth used as our blank)

We also characterized our two choices for green fluorescent protein: GFPa1 and sfGFP. Below are our results indicating that sfGFP is best for our project due to the short time taken to fluoresce (~ 4 hours to a visible level) and it’s use in a diagnostic environment that our plasmid would be used for.

In the future, we hope to take a more proactive approach with the purpose of our project, producing a protein to eliminate ETEC if detected (a la Probiotics) instead of a simple visual response. This would allow a single capsule to be taken beforehand when deployed, with the probiotics quickly leaving the system if nothing is detected and eliminating the E. coli if it is detected.