All the experiments we have done are completed in the synthetic biology laboratories of the Department of Biotechnology in National Chiao Tung University. The laboratories strictly follow the federal regulations and have a standard level 1 license.

For protecting our researchers, we strictly require that all the researchers need to take some courses and pass the exams offered by Environmental Protection and Safety Center before entering the laboratories.

For the courses we took, we acquired knowledge of the safety level of laboratories, the general way to protect ourselves, how to deal with specific chemicals, and the content of the material safety data sheet.

Also, we need to follow many rules. These can be separated into several parts.

The species of fungi we use are not on the White List, Australia Group List, and U.S. Select Agents and Toxins List, so they are considered harmless to the human bodies. Moreover, we do experiments in the biosafety cabinets to prevent numerous fungi spreading across the environment. All experiments involving fungi are done in the laboratory that has a standard level 1 license. Additionally, bleaching the laboratory with disinfectant water is needed every other week.

The peptides we selected do not effect on mammals. In addition, they do not have complicated structures. As a result, they are not an environmental burden in long-term perspective. As for drug resistance, some reference implies that antifungal peptides seldom happen.

To make sure the lysate would not contain any alive E. coli, we boiled the lysate for 15 minutes after breaking the bacteria. Because the lysate that was used to run SDS-PAGE had already been boiled, and the result showed that the peptide did not degrade after boiling. The only thing we had to confirm was whether the bacteria still alive. We put boiled lysate on an LB plate and cultured it at 37℃ for 16 hours. Figure 3 showed the result of the plate and we could see that the boiled lysate had no alive bacteria exist. 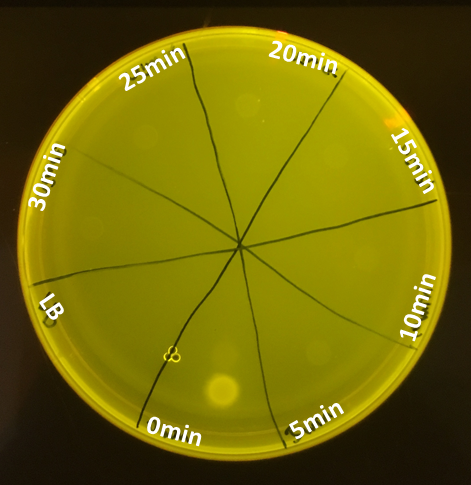