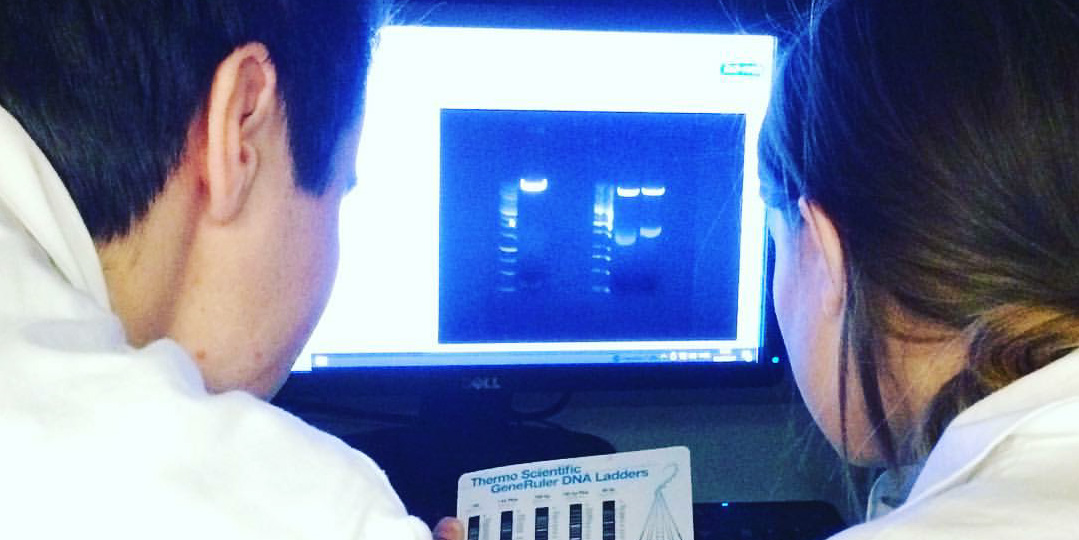 Here is a review of our results. Both for the phage evolution project, our new biobrick and the characterization of an already existing part; the lux operon.

For phage evolution we first characterized the phage that we purified from sewage samples and compared it to T2 phage that we had in the lab. Our phage solution was found to be significantly more effective against our E.coli strain. For future experiments we also tested how much the growth phase of the host bacterium would affect phage infection efficiency. Phage showed clear infection curves at all initial bacterial ODs from 0.3 to 0.9. Interestingly at higher OD the curve became biphasic. The time for the first lysis to take place varied, increasing with initial OD, but stayed within 1 and 2 hours after induction. 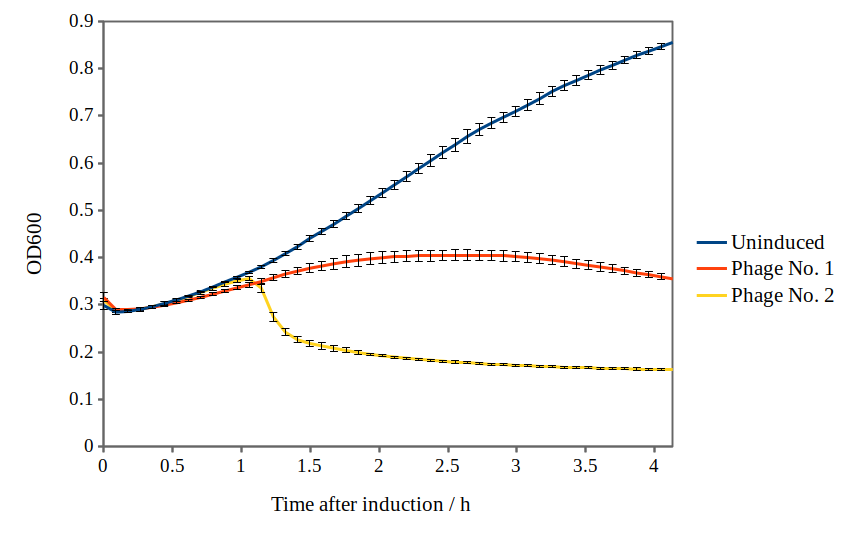 Comparing the phage we extracted from sewage (No. 2) with the T2 phage from the lab (No.1). The curve shows OD600 of a 300 μL E.coli culture induced with phage over time after induction. 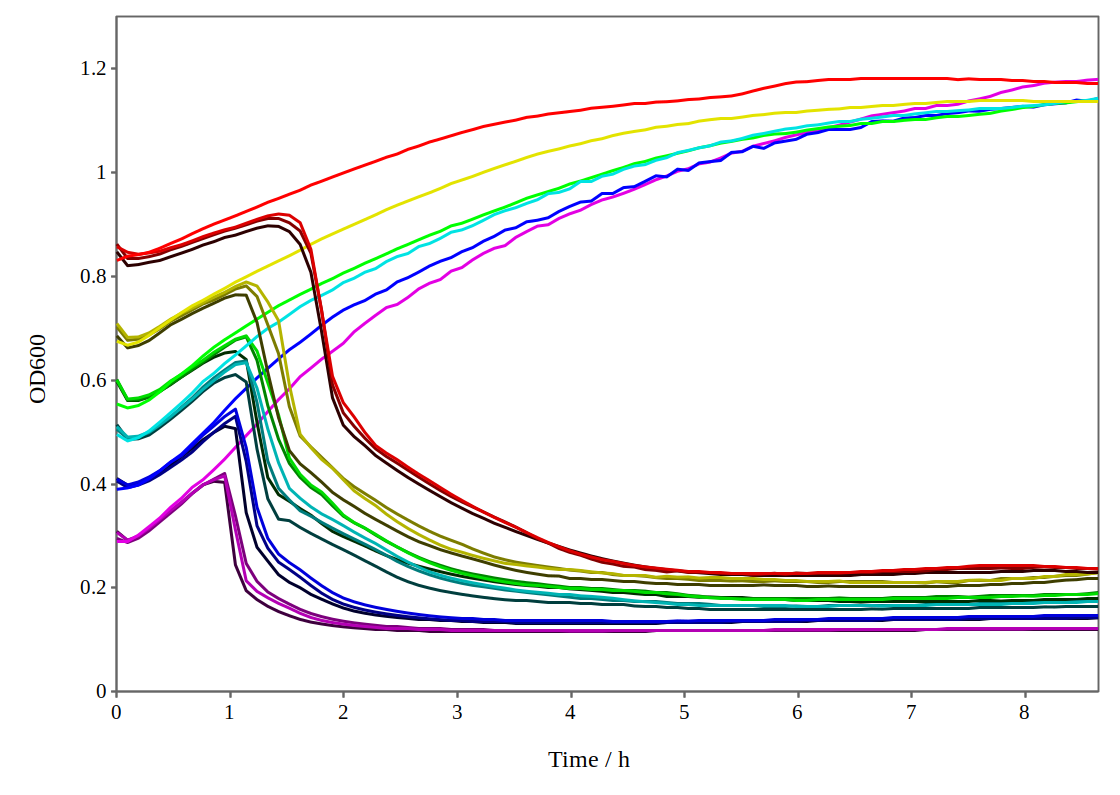 Escherichia coli cultures grown to different ODs challenged with phage from the sewage.

Having characterized our own phage, we evolved a resistant bacterium against it using a single chemostat setup over the course of 24 hours. Samples of the culture were then plated out and three resistant bacterial colonies were further studied (Res1 , 2 and 3). We characterized them together with the unevolved E.coli strain (control) for resistance to phage. We found that none of the resistant colonies showed signs of infection after two hours, but after five hours one of the two repeats of Res2 and both repeats of Res3 were lysed, indicating that phage that were potent against these strains were present in small quantities in our sewage phage sample. Five hours is about three generations. Thus the occurrence frequency of these phage in the original phage sample was about 10-6-10-7. 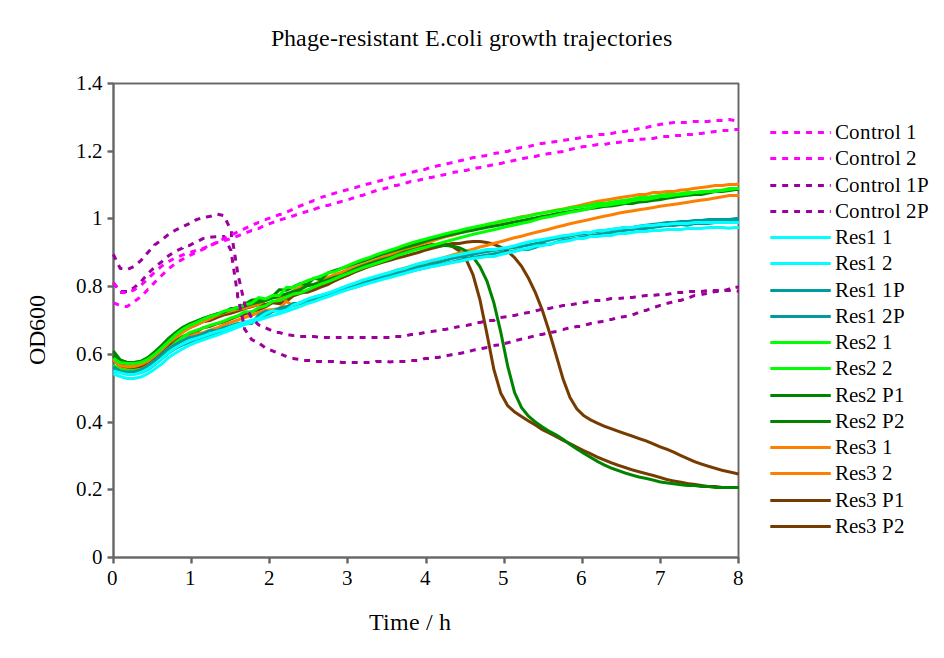 Three strains of phage-resistant E.coli challenged with phage they were evolved against (sewage phage).

We then performed a round of phage evolution using our three chemostat system on the original Escherichia coli strain and the Res1 strain (that was not lysed by the original phage even after 8 hours). We purified phage from the phage-evolving chemostat and tested the phage on our original strain as well as on all the resistant ones. Our new phage sample lysed all strains within 1.5 hours after induction, giving us the proof of concept that we were aiming for. That is, we first evolved bacteria that were resistant to our original phage strain and then we managed to evolve a new strain of phage that could lyse the resistant bacteria! 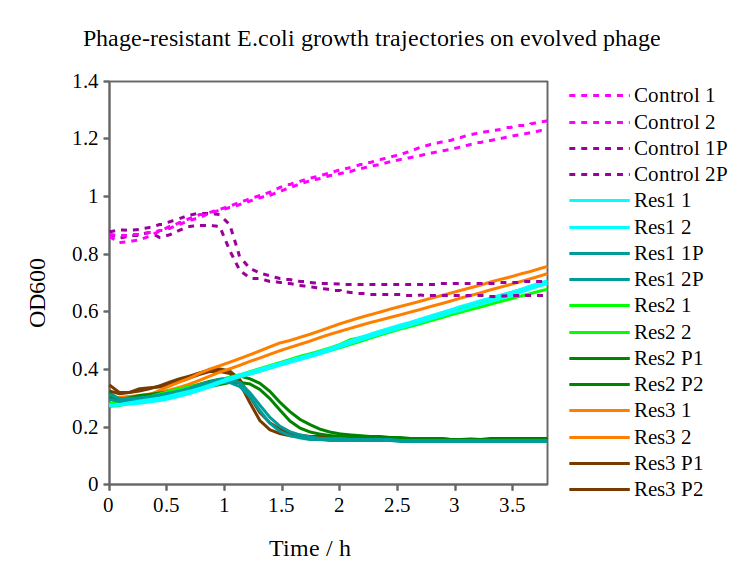 The MP6 mutator (original) biobrick was derived from the MP6 original plasmid, and it is an arabinose inducible and glucose repressible plasmid that codes for 6 mutagesis related genes (see MP6 Part site for details).

In order to characterize the mutation rate of the MP6 biobrick, it was transformed together with pLA230 into E.coli DH5α. The doubly transformed cells were grown with either glucose or arabinose (see protocol) and incubated in 37ºC overnight. The cells were then plated on agar containing Ampicillin. The number of colonies formed was an indication of the mutation activity of MP6, as only bacteria containing pLA230 where the point mutation was reverted would survive on the Amp containing agar plates. 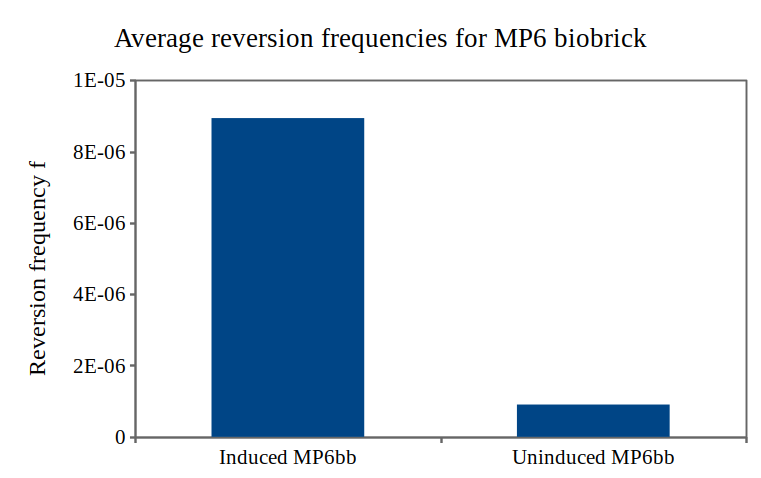 Reversion frequency of MP6 biobrick induced with arabinose or repressed with glucose.

The reversion frequency was quantified by dividing the number of colonies surviving on ampicillin by the number of colonies growing without ampicillin (scaling with the dilution factors accordingly). We performed two testing rounds on our MP6 biobrick, giving on average a reversion frequency of 10-5 when induced and 10-6 when repressed. In order to compare our biobrick with the original MP6 we quantified the relative reversion frequencies for both, that is how many times more revertants we got when the plasmid was induced than when it was not. We got ratios of 19 and 21 respectively. Thus the two plasmids performed quite similarly. 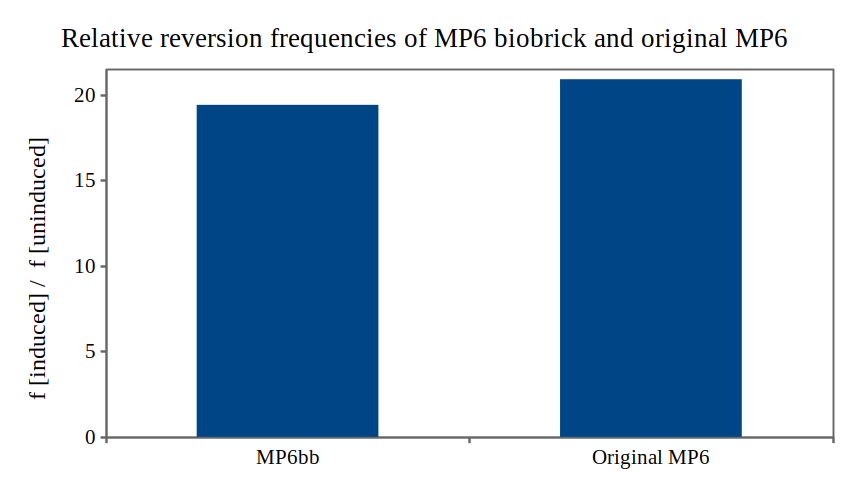 Relative reversion frequencies of our MP6 biobrick and orginal MP6.

We also imporved the characterisation of the biobrick BBa_K325909, which is an operon consisting of Lux C, D, A, B, E under the arabinose-induced promoter pBAD. We chose to improve this biobrick as we originally wanted to use the lux operon as a reporter for our arabinose-inducible system. In this way, we could test how the expression from the pBAD promoter was dependent on arabinose concentration.

Results from our experiments are shown in the graphs below. Error bars are averages over 3 repeats. As no luminescence was detected at 37 °C, these graphs are not included. The optimal temperature for Lux luminescence as determined by us was 28.8 °C. 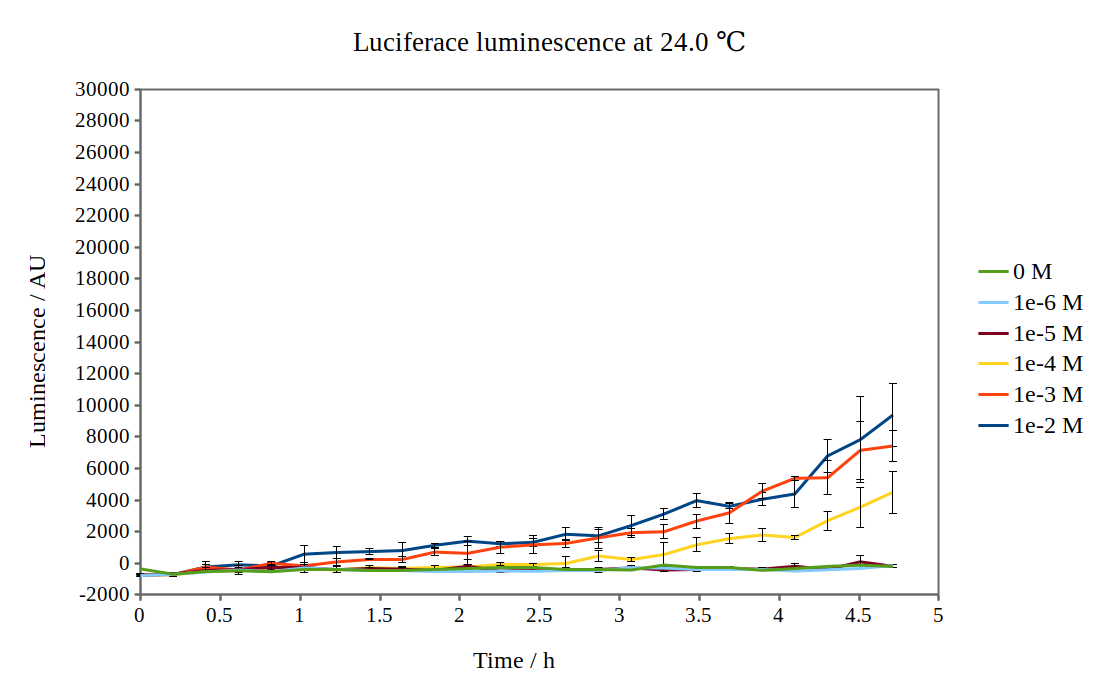 Lux luminescence at 24.0 °C. The developement is slow and the values are low. 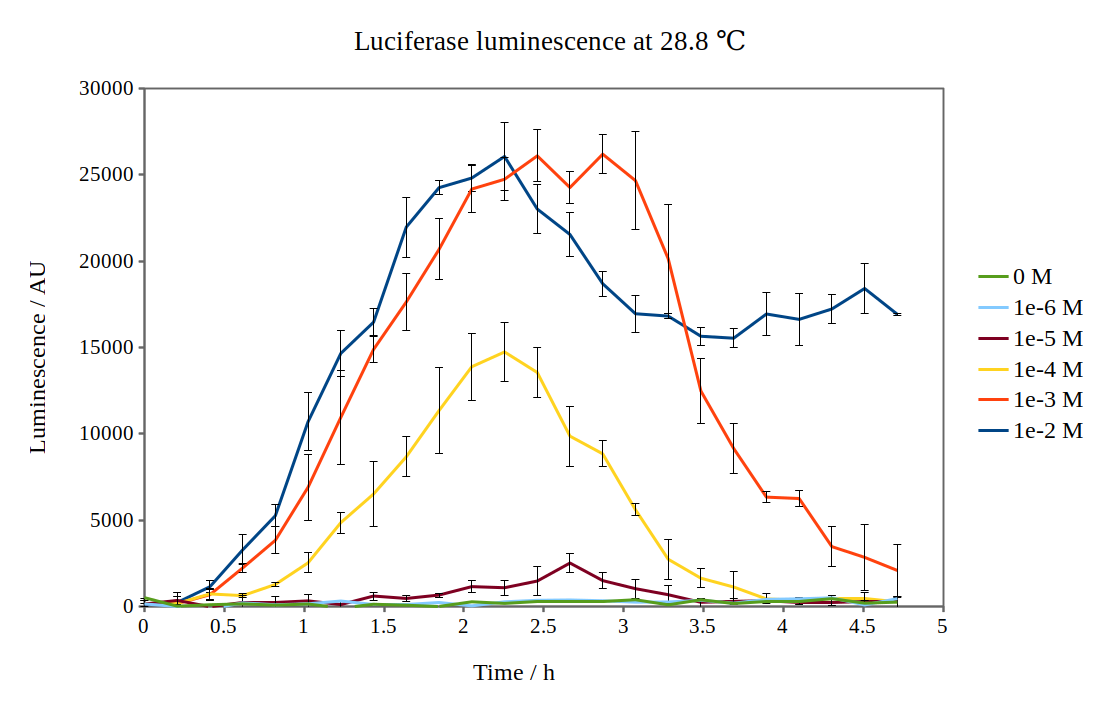 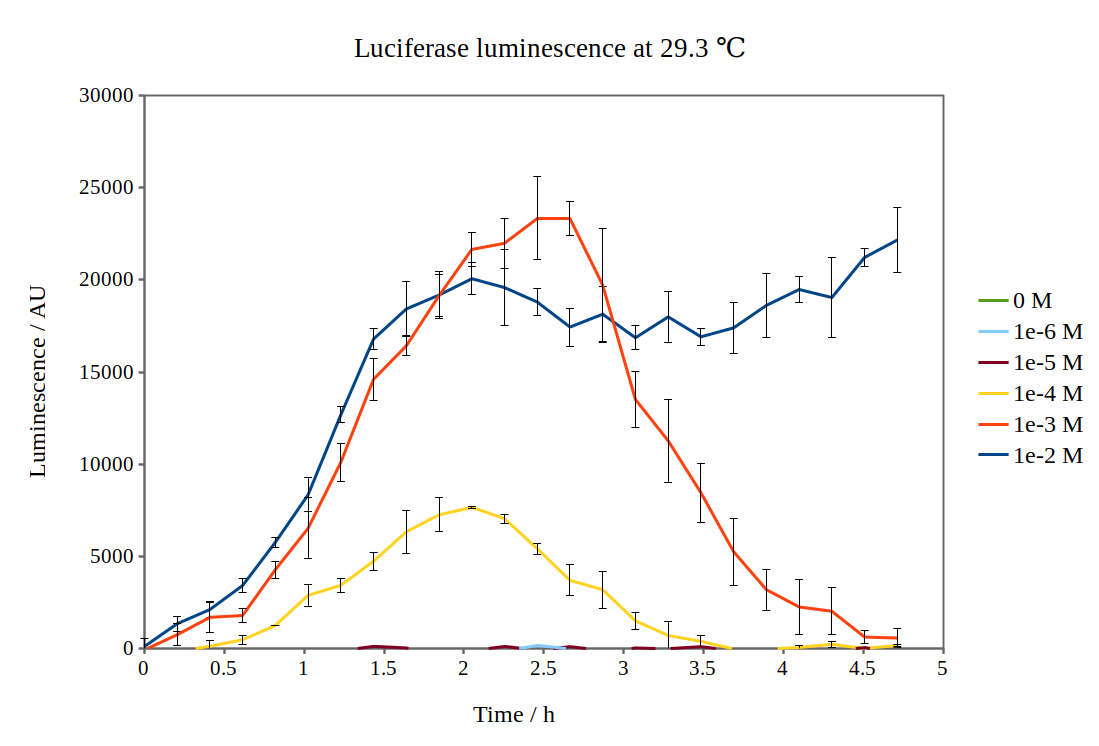 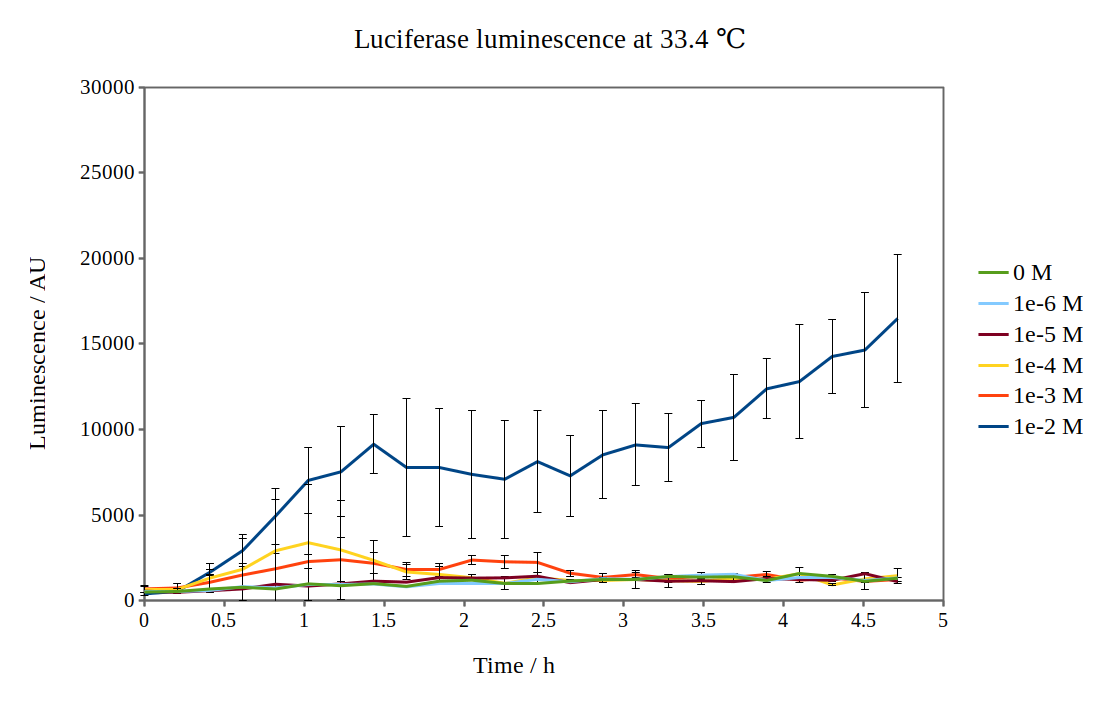 Lux luminescence at 33.4 °C. Rather slow and poor performance at all inducer concentrations. 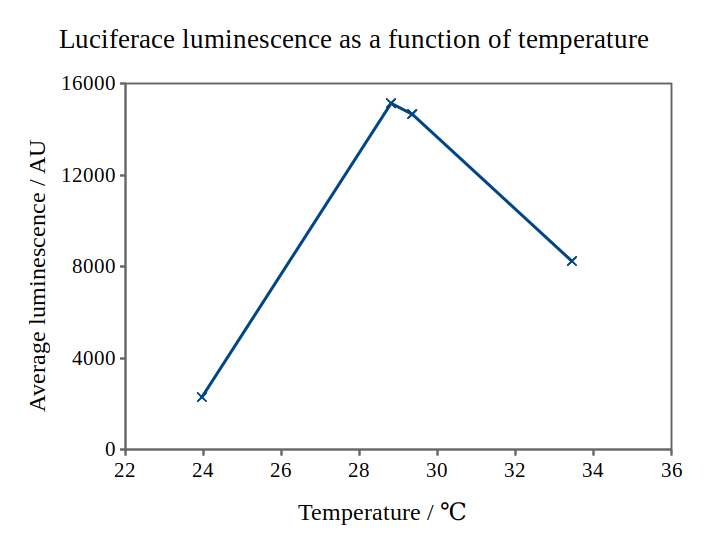 The average luminescence over 4.5 hours at 1e-2 M Arabinose concentration against incubation temperature.